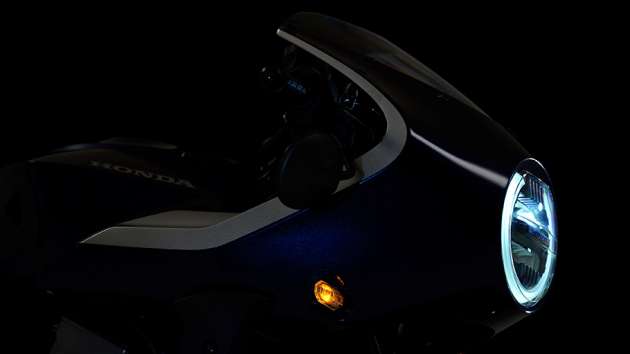 A teaser from Honda purportedly shows the scheduled for release 2022 Honda Hawk 11. From the teaser, a head on view of the Hawk 11 shows the front fairing which is done in typical cafe racer style with the unveiling taking place at the Honda Motorcycle Show on March 19 in Japan.

While full specifications of the Hawk 11 are yet to be revealed, from the press release, expect to see “a high powered concept motorcycle, providing a new standard in motorcycle lifestyle for the rider, especially those with experience.” Some are surmising the Hawk 11 will be replacing the CB1100 that has since gone out of production.

As for engine configuration, speculation is rife the Hawk 11 will be equipped with a 1,084 cc, parallel-twin power plant. This engine is currently used in the Honda Africa Twin CRF1100L, NT1100 and Rebel CMX1100.

The Hawk name is not new to Honda motorcycle fans, with the name last seen in Malaysia in the single-cylinder Honda Hawk 145 as well as other Honda bikes in the 70s and 80s. Falling out of use in the Honda catalogue in the 90s, most Hawk models were naked sports machines of medium displacement and below.

There’s a $1.2 Million Ford GT for Sale That Will Burn Your Eyes Out