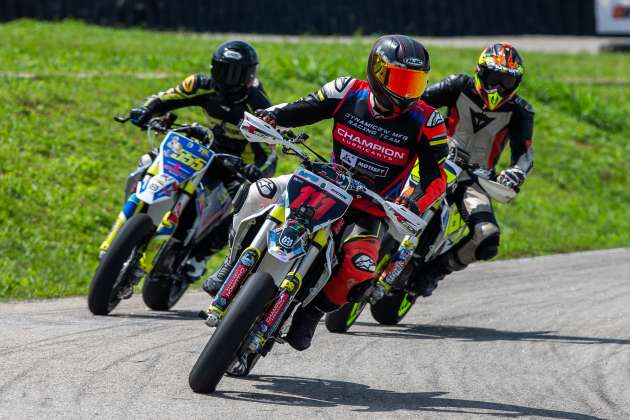 Now in its second season, MSF SuperMoto returns for 2022 with an even larger field with over 50 racers competing, doubling the number of pariticipants from last year. The reopening of the Malaysia-Singapore Causeway sees the return of racing competition from Malaysia’s island neighbour including big names Eric Chi and Mohd Hasroy Osman in the Elite MSF SuperMoto category.

The MSF SuperMoto field has also grown with the influx of racers from the MSF Superbike (SBK) race series, with names like MSF SBK podium finisher Karthikesan Sakthivelu trying his chances in a different race series and racing style. With the MSF SuperMoto race series building on the success of its inaugural season in 2021, the top guns from last year are seeing stiff competition from this year’s crop of new challengers.

In the top rung All Stars Pro category, Daniel Haiqal of Team KMTR Ravenol MY had his top dog position come under attack by Ian Dublin, racing for WeeBiker Tom’s Racing. Dublin, whose resume includes a spot racing in the British Superbike Championship, brought the action to Haiqal in close fought wheel-to-wheel and elbow-to-wheel action in Race 1 while Hasroy mounted a challenge in Racing 2 with an early.

However, Haiqal prevailed, emerging from the race weekend as overall winner after the chequered flag in Race 2. In the Advanced category, the returning top three riders from last season resumed their battle in 2022, with Azizul Khairi of NK Racing eventually prevailing over the competition with a hat trick of wins, winning the 5-lap Super Rocco race, Advanced Race 1 and Race 2.

A surge of entries a mere five days before the start of racing on the May 21 weekend saw the creation of the SM Evo category in MSF SuperMoto, segregated into SM Rookies and Super Rookies. Kieran Ng of Weebiker Tom’s Racing Team showed his mettle by matching, and exceeding, lap times run by riders in the Advanced category.

At the end of the weekend’s racing in SM EVO, overall winner Ng was followed by Steven Tang of WeeBiker Tom’s Racing in second and 16-year old Mohd Ervin Ekhsan of TM Racing Singapore in third. Rounding out the weekend at Tangkak, newcomers in the Super Rookies strutted their stuff, with Muhamat Hairy of NK Racing taking overall winner, Marcus Lee Han of Singapore coming in second and Hervin of Team KMTR Ravenol MY playing third.

The next round of the 2022 MSF SuperMoto championships moves to the very quick UniMAP circuit in Perlis. All races are streamed live on the MSF SuperMoto page, so don’t miss your chance to catch the action.