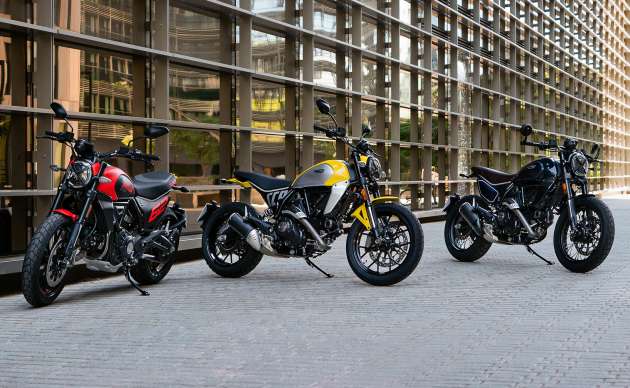 Rationalising its Scrambler lineup to three models, the boys from Borgo Panigale now offer the 2023 Ducati Scrambler in three flavours – the Scrambler Icon, Night Shift and Full Throttle – and expected to make its public debut in March 2023. For Malaysia in 2022, the Ducati Scrambler Icon is priced at RM57,900 while the Nightshift goes for RM66,900.

Power for the Scrambler Icon, Nightshift and Full Throttle still comes from Ducati’s iconic Desmosdue air-cooled V-twin producing 73 hp. Going on a diet, the Scrambler now weighs 4 kg less than previous, thanks to a redesigned trellis frame as well as some lighter engine internals.

The Scrambler swingarm is also new and combined with a shock absorber with mounting point located to the centreline. The frame redesign now has the main frame and rear sub-frame separated, making crash repairs and modifications easier. 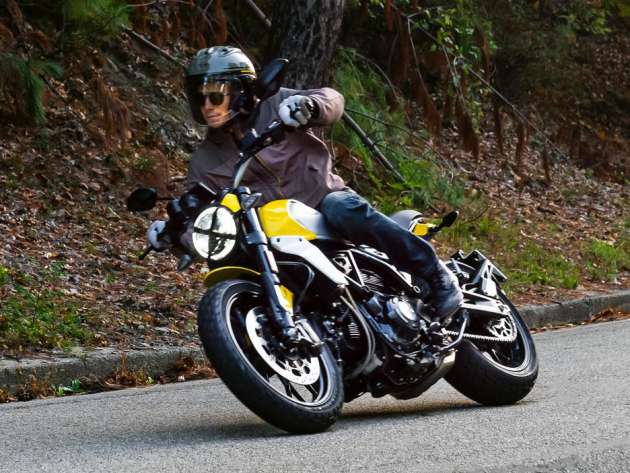 A slightly increased steering head angle makes the Scrambler easy to use both in manoeuvring and in city traffic. Wheels are redesigned for 2023, but retaining the original 180-inch front and 17-inch rear wheel.

Weight savings of 2.5 kg gained in the engine room, aside from the revised engine internals, also include a new eight-disc clutch with a softer lever pull. Equipped with a bearing mounted shift drum, the new clutch is more compact with a smaller side cover, allowing more space for the rider’s foot.

New for the Scrambler is ride-by-wire throttle which allows the fitting of Ducati Traction Control (DTC) and two riding modes – Road and Wet. Standard equipment is cornering ABS and the Scrambler Icon and Nightshift come ready to be fitted with the optional Ducati up-and-down quickshifter (supplied as standard on the Full Throttle) while the Ducati Multimedia System with connects the the rider’s smartphone is optional across the range.

Other design changes include the headlight, which is now a full LED unit, also with redesigned LED taillight and LED turn signals. The LED DRLs, forming the distinctive Scrambler ‘X’, are now tapered and sharper for a modern aesthetic.

Information is now displayed on the new 4.3-inch color TFT cluster, giving the Scrambler a more modern outlook. The steel tank has been redesigned, as are the side covers, and equipped with an interchangeable cover that, along with the fenders and details on the headlamp, allow the rider to customise the Scrambler to his or her wishes.

The Scrambler Icon comes in three colour choices – ’62 Yellow, Thrilling Black and Ducati Red – which can be combined with six accessory kits to give a total of nine colour combinations including Rio Celeste, Jade Green or Velvet Red. A revised handlebar is lower and closer to the rider, allowing more control over the bike while seat has been redesigned, with a more tapered and streamlined shape.

Meanwhile, the Scrambler Full Throttle is the sportiest of the 2023 Ducati Scramblers, inspired by US flat track racing motorcycles. Features include a shorter front fender, omitted rear fender, red tags on the alloy wheels, a street-legal Termignoni silencer and Ducati Performance LED turn signals aside from the earlier mentioned quickshifter.

Available as an accessory is the Rosso GP19 seat cover, giving the Full Throttle a sporty single-seat look. Coming standard are side number plates bearing the number 62, the debut year of the original Ducati Scrambler, a skid plate and variable section handlebar. 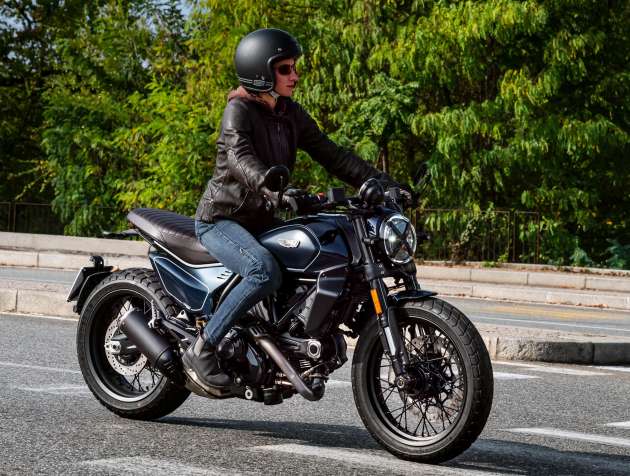 Coming in a cafe racer style is the Scrambler Nightshift, fitted with stitched saddle in a shade of dark leather. The standard equipment spoked wheels are finished in black, combined with side number plates, a minimal front fender, no rear fender, black finishes for the aluminum aesthetic details, as well as compact LED turn signals.

As befits the Nightshifts cafe racer design, a flat handlebar and bar end mirrors are standard equipment. The Nightshift comes in Nebula Blue with bodywork finished with alternating accents of glossy and matte surfaces.