Cycling on highways in Malaysia – up to RM5,000 fine, or 12 month term in prison, says PDRM – paultan.org 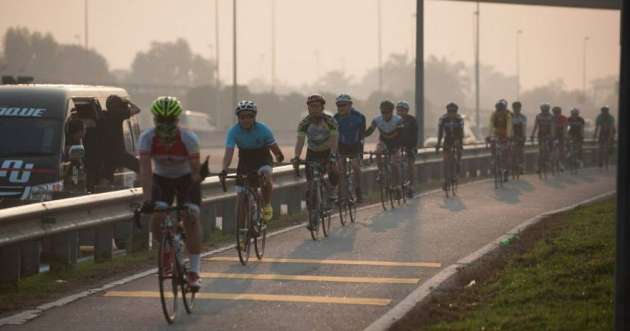 Cyclists in Malaysia, do take note, Malaysian police warn that any cycling activity on highways without the permission of police or the Malaysian Highway Authority (LLM) will incur penalties. This include a fine of between RM1,000 to RM5,000 or a prison term of up to 12 months.

“Action will be taken under Section 54(1) of the Road Transport Act 1987 which provides for such a penalty,” said Bukit Aman police Traffic Investigation and Enforcement Department (JSPT) director Datuk Mat Kasim Karim. Additionally, Kasim said failure to obey road signs showing cycling activity is not permitted on Malaysian highways will attract charges under Section 79(2) of the same act, while Section 112(3) provides for the bicycle to be impounded.

Kasim said recent cyclists on highways seen on social media where cyclists were seen riding in a manner dangerous to themselves and other road users prompted police to take stern action. “Thus far JSPT has taken an advisory role towards cyclists, especially those cycling in groups. We do not forbid this but safety aspects must be adhered to,” explained Kasim.

According to a Harian Metro report, this includes failure to install front and rear lights, as well as a bell, under Article 35 of the Road Regulations 1959 which comes with a maximum penalty of RM2,000 fine or a jail term of up to six months. Kasim added that between January and September of this year, 150 reports involving bicycles were received of which 71 were fatal accidents, 24 with serious injuries and 55 with light injuries.