The opening stage of the 2020 Dakar Rally saw Indian teams Sherco TVS and Hero MotoSports complete the day as all eight riders made it to their respective bivouacs. The first stage comprised a total stretch of 752 km from Jeddah to Al Wajh with 319 km of the special stages. The stage with navigation, sand dunes and the stony terrain posed several challenges. However, Hero’s Paulo Goncalves was the fastest of the lot and finished Stage 1 in 12th place. The Dakar veteran made his experience count and was cautious through the opening stage without losing pace. Meanwhile, Sherco TVS’ Adrien Metge, filling in for brother Michael, finished 15th and was the fastest in the team.

Overall, it was a favourable day for Sherco TVS though as the team had a more consistent start to the Dakar Rally. Johnny Aubert finished the day in 22nd place, while Lorenzo Santolino finished 25th. It was a disappointing day for India’s Harith Noah, however, after the rider had a nasty crash that damaged his eye. Nevertheless, Noah managed to complete the stage, although in 111th place but has been deemed medically fit to participate in Stage 2 of the rally. 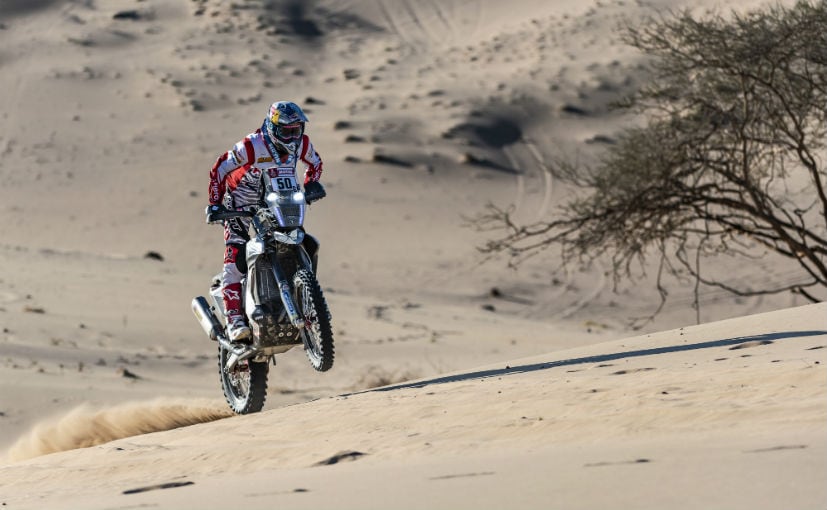 At Hero MotoSports Team Rally, Sebastian Buhler, stepping in for the injured Oriol Mena in the team was the second fastest after Goncalves and finished 32nd at the end of Stage 1. India’s CS Santosh was next in 39th place but the rider had multiple crashes through the day and also injured his ankle in the process. Joaquim Rodrigues (JRod) though had the most issues in Stage 1 as the rider faced mechanical issues with his motorcycle that forced him to step down from the stage. However, JRod will be allowed to restart the rally from Stage 2, thanks to the new wild card rule and will be handed stage wins. He won’t be eligible for an overall victory though.

The opening stage of the 2020 Dakar Rally saw reigning champion Toby Price of Red Bull KTM Racing maintain his lead, followed by Ricky Brabec of Monster Energy Honda Team and Matthias Walkner of RedBull KTM Racing in third place. The top three riders are divided by a time of 2min40s.

Stage 2 of the rally will see stakes going higher as the teams ride from Al Wajh to Neom for a special section of 367 km.