There’s nothing more exciting than taking on the challenge of building your dream, especially when it revolves around a hopped-up car. Hal Marshman of Hanson, Massachusetts, got indoctrinated into the automotive world at the age of 13 when his dad gave him the worn-out 327ci Chevy mill from their station wagon to tear down and reassemble on the family’s back deck. Seeing how much his son was intrigued by cars it was the perfect opportunity to see if he would have the mechanical skills to pull it off. Fascinated by the experience and hungry for more, it wasn’t long till he became fast friends with his next-door neighbors who were hard-core racers. There were always hot rods in their driveways, specifically an original ’50s-era 1932 Ford and a nasty 1941 Willys Gasser known as “Hot Chestnut.”

From there his life took the fast track, as he’d watch them wrench on the cars every Saturday to get ready for race day at New England Dragway in Epping, New Hampshire. As Hal tells it, “The sound of the hopped-up V-8s combined with their attitude and scent of high-octane fuel immediately got me hooked.” That Willys became a mystical unicorn that would follow him for decades. 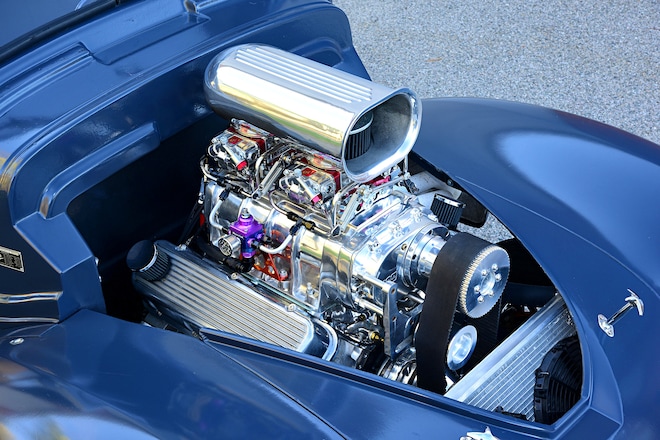 As the years passed he spent plenty of time at the dragstrip watching his quarter-mile heroes burn nitro, as well as spending late nights catching local street racers tear it up at an area known as Ridge Arena. It wasn’t long after until he built a V-8 Vega wagon packed with an evil 331ci Chevy small-block and 4.88 gears, joining the late-night group on a weekly basis. A number of scorching ’60s-era Chevy Novas followed, each one more aggressive than the last. High-performance cars were always a constant in his life and he credits his lovely wife, Carolyn, and his daughters, Heather and Christina, for their endless support through all the builds. Somehow though, even with all of the cool cars he had owned over the years, he was still haunted by the 1941 Willys Gasser his neighbor owned while he was a growing up. Making the decision to finally build the car that had been in the back of his mind for decades he made a call to American Gasser in Saginaw, Michigan, for all the goods to get started.

When it’s time to drop anchor, a Wilwood dual master pushes fluid through steel lines to matching 11-inch vented discs and calipers at each corner. For a nostalgic look, 15×12 E-T Fueler wheels wear Mickey Thompson rubber out back, complemented by 15×6 E-T Gasser wheels capped by Cooper rubber in front.

If you’re building a Gasser, your engine had better have plenty of attitude. Hal went straight to the head of the class, starting with a Dart Big M Sportsman block that he had Reid’s Automotive in Whitman massage to 496 ci. From there he took on the assembly and added a Lunati Signature Series blower crank linked to matching forged 4340 H-beam rods topped by Diamond forged aluminum pistons getting bumped by a stick from Comp Cams. For aggressive power a set of Brodix BB-2 X aluminum heads tweaked by Prock Performance of Mooresville, North Carolina, meet a BDS intake and Weiand 8-71 blower sucking air and fuel through a pair of Quick Fuel Technology 750-cfm carbs topped by a Hilborn-style scoop. An MSD ignition lights the fire with spent gases moving through a set of custom fenderwell headers to a 3-inch exhaust with SpinTech mufflers by Tube Chassis Designz. An FB Performance Pro-Street 4STB (AOD) trans packed with all the right goods moves the power to a Strange 3-1/2-inch chromoly driveshaft.

When it came to the exterior, an American Gasser complete fiberglass body package featured a steel-reinforced body, hinged doors, and a tilt nose. With everything fresh from the mold it was Mike Rowell of Halifax who massaged the panels and brought it all to life with a coating of Martin Senour Pro/Base Elephant Gray gloss. All exterior trim parts, including the grille, headlights, taillights, and door handles, were from Willys replacement parts, while the American Autowire kit was installed by Tube Chassis Designz. To complete the vintage flair, Paul Grassi of Crow Point Graphics added the iconic Hemi Hunter lettering.

For now the coupe has a raw street racer look. Future plans are to have the exterior completed in a dramatic orange flake vibe accented by a rolled black Naugahyde interior to bring the car to its final rendition. Any hot rod build takes plenty of time to complete with help from friends and Hal wanted to be sure to thank Bill Terman and Steve Ennis, as well as his fellow club members in the Lug Nut’s Car Club. This Gasser is just plain wicked.