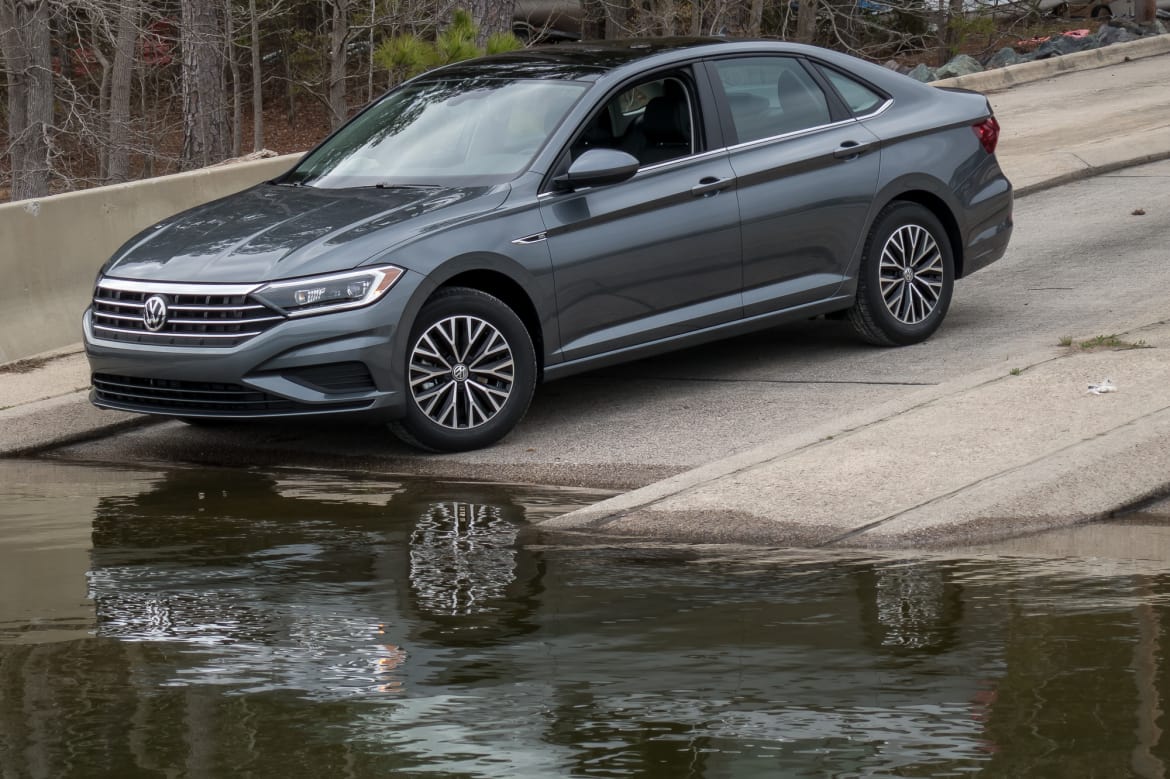 The 2019 Volkswagen Jetta faces a tough task, seeing as it’s competing against rivals like the Honda Civic, Hyundai Elantra and Toyota Corolla — not to mention the continued onslaught of small SUVs stealing sedans’ shine. Not everyone craves a truck or SUV, however, and VW has provided the latest Jetta with a timely round of improvements to drive the point home.

Related: 2019 Volkswagen Jetta Review: Better in All the Right Places

A punchy and economical turbocharged engine provides driving fun that also goes easy on your fuel budget. While the Jetta’s softer balance of ride and handling doesn’t have the sparkle of VW’s own Golf GTI hatchback, the Jetta doesn’t feel like a fanny-dragger when it comes to driving dynamics. Other positives include a handsome high-resolution infotainment system, a wide range of standard and available safety features, and a trunk that can easily handle bag-heavy errands or luggage-toting airport runs. All in all, the 2019 Jetta is a practical driving machine that doesn’t feel like it was built to a penny-pinching budget.

Does that mean the Jetta is suddenly the small sedan by which all others are judged? Not when you consider VW got stingy in a few key areas — and some that are just plain odd.

For a comprehensive take on our time with the 2019 Jetta, follow the related link above for our Fred Meier’s full review. For a quicker reference, here are 10 things we like and five we don’t about the 2019 Volkswagen Jetta:

1. It’s More Fun to Drive Than You Think

Based purely on numbers, you might think the turbocharged 1.4-liter four-cylinder engine is going to fall short. While 147 horsepower and 184 pounds-feet of torque doesn’t sound exciting, the engine delivers more than enough acceleration when you need it. For routine driving, the nice dollop of torque gives the 2019 Jetta plenty of pep. 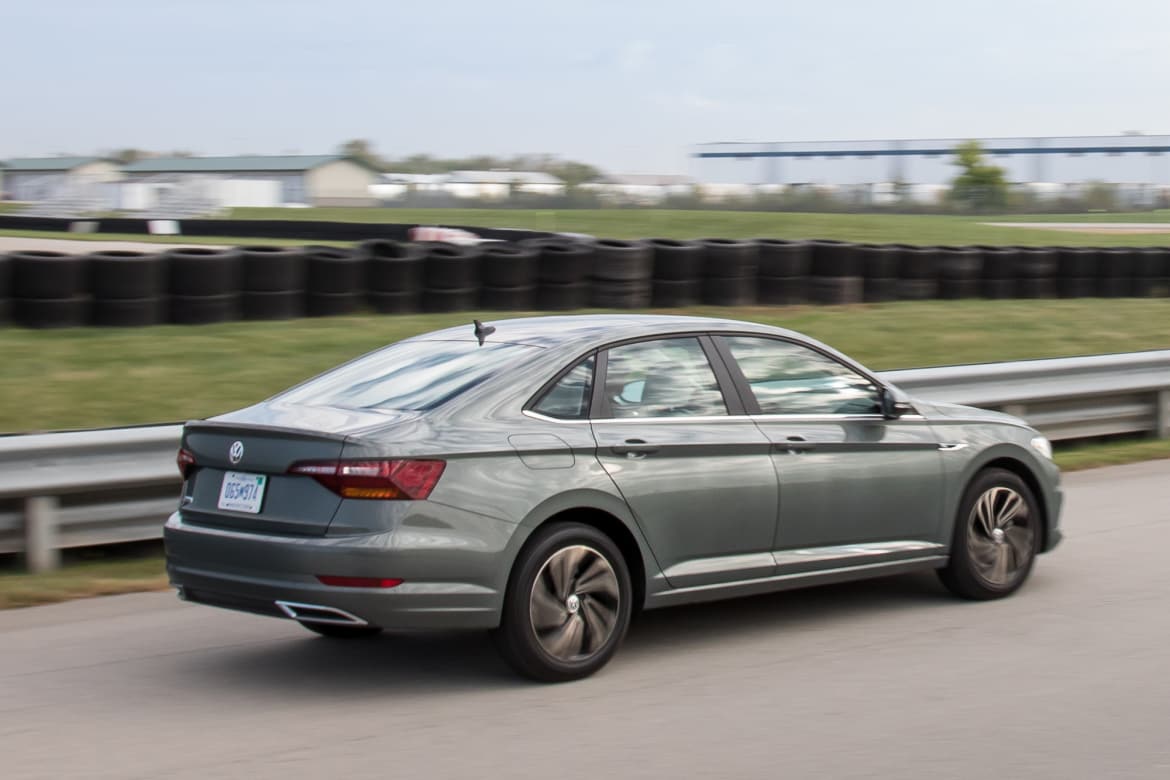 The Jetta has gotten a thorough overhaul when it comes to the available infotainment systems. For starters, Apple CarPlay and Android Auto compatibility are standard across all trim levels, including the budget-friendly base Jetta S. While the standard 6.5-inch touchscreen gets the job done, it’s the available 8-inch display that ups the Jetta’s tech game. The controls and graphics of this touchscreen are a vast improvement over what was offered in the outgoing model.

A six-speed manual transmission is available only in the base model; all other trim levels come standard with an eight-speed automatic transmission. That’s a good thing since the manual is balky in its throws, while the automatic gearbox performs smoothly and with no hesitation. We hate to see manual transmissions ride off into the automotive sunset, but in the case of the Jetta, the car is better when it shifts for itself.

The Jetta scores solid EPA-estimated mileage figures that compare reasonably with its two main rivals, the Honda Civic and Toyota Corolla. When fitted with the automatic transmission, the 2019 Jetta delivers 30/40/34 mpg city/highway/combined. For comparison, a 2019 Honda Civic registers at 32/42/36 mpg when powered by a turbo 1.5-liter four-cylinder and continuously variable automatic transmission; a 2019 Corolla gets 28/36/32 mpg with the 1.8-liter four-cylinder and CVT. 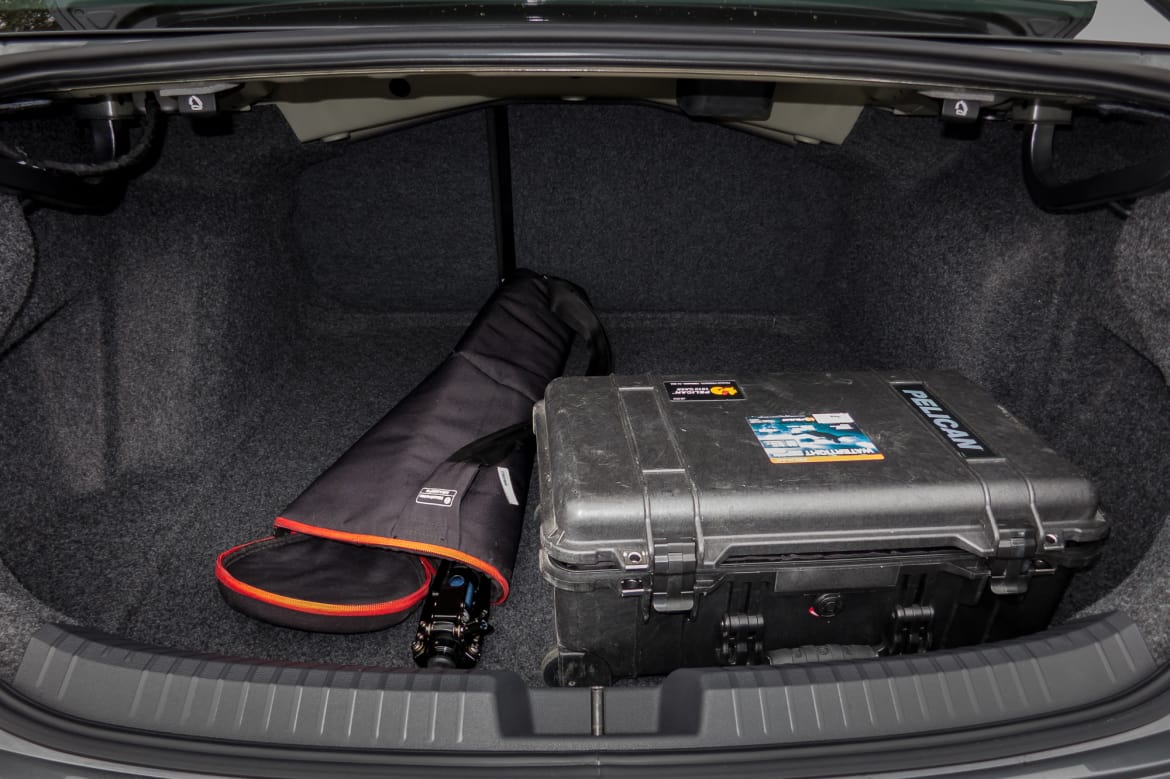 The Jetta has more than enough cargo room, with 14.1 cubic feet of space available behind the split-folding rear seatback. Also, the trunk lid is nicely sized and doesn’t make loading bulky objects an impossible squeeze.

6. Better Value Than Before

The Jetta has sometimes faltered when it comes to being a bargain. The latest model compares much more favorably in terms of both its base price as well as when you start climbing trim levels and adding options. The entry-level Jetta S has a starting price of $19,440, while the range-topping SEL Premium comes in at $27,840. That’s right on target when priced against similar-size economy sedans.

The Jetta offers a long list of safety equipment, though the base model requires an extra outlay of $450 to get automatic emergency braking, blind spot monitors and rear cross-traffic alert. These items come standard one trim level higher on the Jetta SE; that’s a modest expenditure for a lot of added peace of mind. The Jetta is also available with adaptive cruise control, lane departure warning, lane keep assist and high-beam assist.

8. Base Model Worth Considering

Automakers love tossing journalists the keys to test cars loaded with options. That’s why we purposefully wanted to find out if the base Jetta S is worth considering or if it feels like a gulag on four wheels. Good news: The entry-level Jetta is a fine choice — especially when you add in the extra-cost safety features. If you can live with cloth seats and don’t mind giving up some infotainment frills, less can equal more (money in your pocket, that is) with the base Jetta. 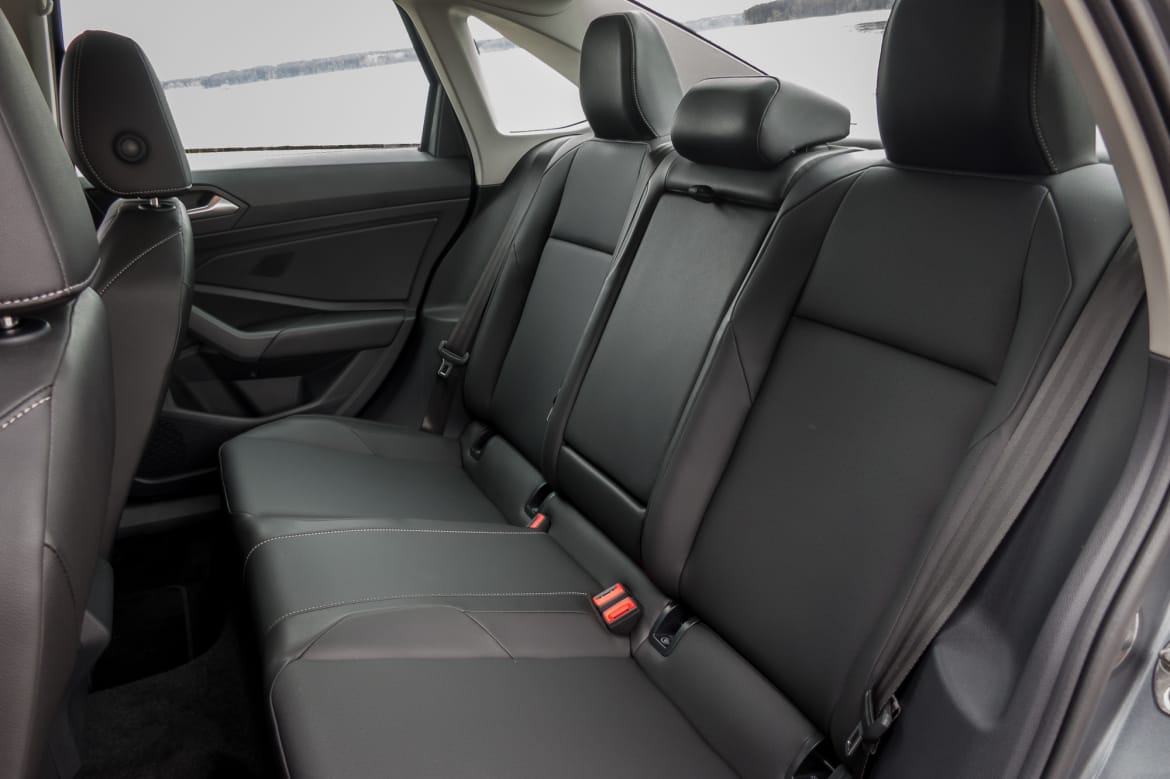 If you’re looking to buy and not lease, it’s worth noting Volkswagen affixes an impressive six-year/72,000-mile bumper-to-bumper warranty to the Jetta. Better still, the warranty is transferable to the second owner, too.

The 2019 Jetta received a five-star rating, the highest possible overall score, in crash tests conducted by the National Highway Traffic and Safety Administration. The Jetta also did a fine job in tests carried out by the Insurance Institute for Highway Safety, though it missed out on receiving a Top Safety Pick rating due to the marginal performance of its headlights. (This same issue affected the 2019 Honda Civic, which scored a poor rating by the IIHS for the effectiveness of its peepers.)

1. Turbo Four-Cylinder Has Its Limits

There is only so much a 147-horsepower turbo-four can do, after all. While the Jetta’s engine does a fine job in most driving tasks, we found it felt breathless when it came to quick highway passing maneuvers. 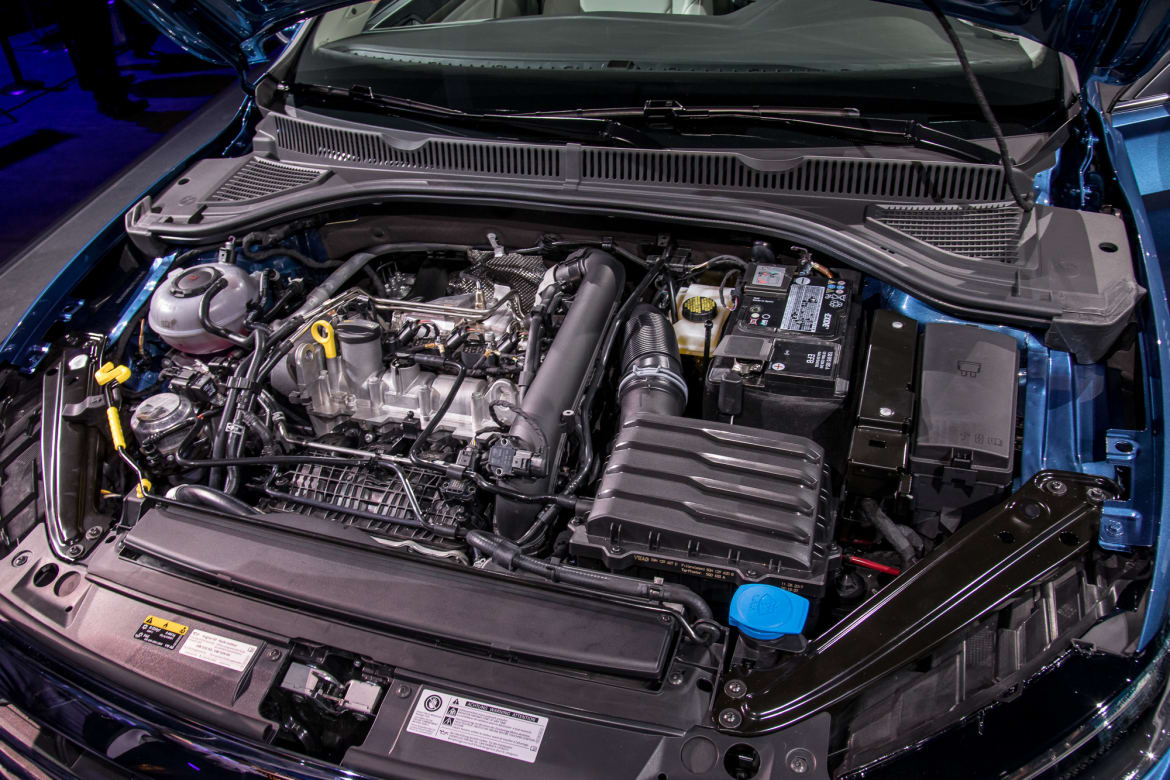 VW bumped up the size of the standard infotainment screen, which is good. But this unit is pretty basic and offers little in the way of color (if you’re a big fan of gray, you’ll love it). To get the sharper and more colorful 8-inch touchscreen, you must ante up to the Jetta in SE trim. Meanwhile, the SEL trim is the starting point for the available Digital Cockpit display, a 10.25-inch screen that replaces the standard gauge cluster.

The optional BeatsAudio system packs a whopping 400 watts and a trunk-mounted subwoofer. That would all be music to our ears (pun intended), except we found the seven-speaker system too bass-heavy, less crisp and just way OK.

4. Who Jacked the USB Ports?

For a car meant to appeal to younger, more tech-savvy car shoppers, the 2019 Jetta is downright miserly when it comes to USB outlets. In the base Jetta S, you only get one, located on the dashboard. Even when you step up the trim levels, the most you’ll get are two, one on the dash and one in the center console. To anyone riding in the rear: You’ll be better off charging up your smartphone before the ride, as there is nary a USB port for you … sorry. 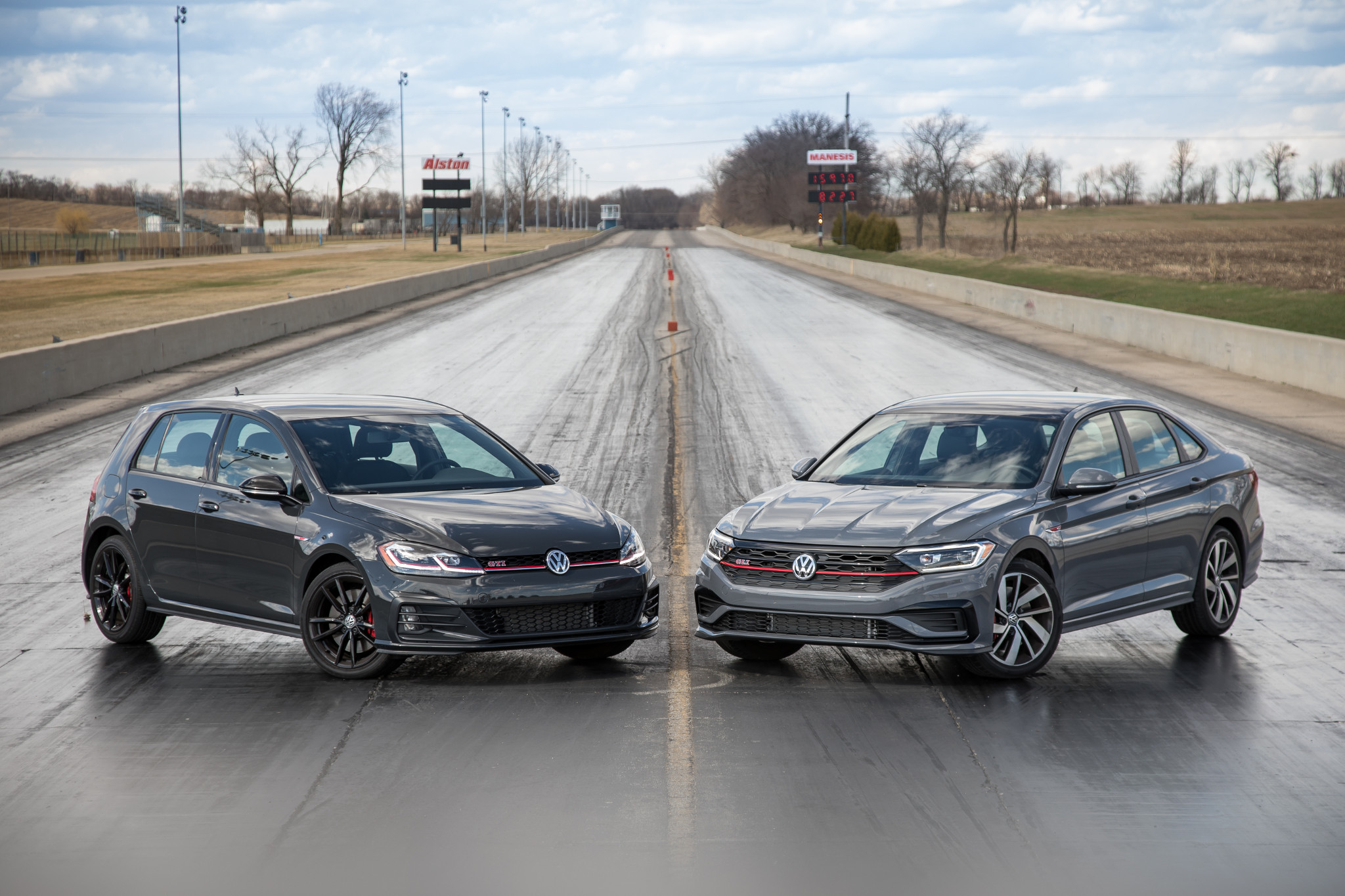 The Jetta offers a nice level of driving fun, but the torsion-beam rear suspension and softer ride and handling would leave a Golf GTI owner disappointed. This is not a sports sedan; it’s an economy car with a hint of sportiness baked into it. That’ll be fine for many car shoppers, though for more thrills, you might consider opting for the Jetta GLI.