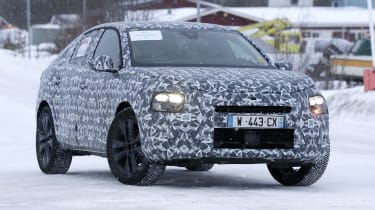 The forthcoming replacement for the ageing Citroen C4 Cactus has been spied winter testing again, this new compact SUV expected to replace both the crossover inspired C4 Cactus and regular C4 hatchback.

The all-new model will undergo a major overhaul, evolving into a coupe-SUV and adopting PSA’s range of petrol, diesel and all-electric powertrains.

The C4 Cactus successor was expected to be revealed in concept form at the cancelled Geneva Motor Show, in the build-up to going on sale later this year or early in 2021. That timescale isn’t thought to have changed at this stage, although it’s likely we’ll see the car later in the year.

When it launches, it’ll be a rival or the forthcoming Volkswagen ID.4 SUV, while the conventionally powered variants will act as budget alternatives to the Audi Q3 Sportback and the BMW X2.

The latest test mule could be a petrol or diesel-engined car, in contrast to the battery-electric development car that was seen in January this year. The exteriors of two test cars are virtually identical, save for the alloy wheel design and the presence of an exhaust pipe in these latest images.

The car is expected to use the same version of PSA’s CMP underpinnings found under the latest Peugeot 2008, which means buyers should have access to the same range of 1.2-litre three-cylinder petrol and 1.5-litre four-cylinder diesel engines. Meanwhile, the electric model will use the 134bhp motor found in the new e-2008. 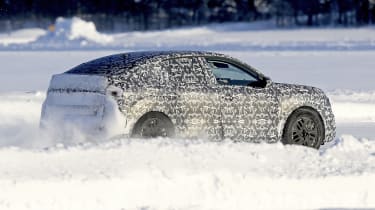 Design-wise, Citroen’s C4 Cactus replacement will ditch the old model’s conventional three- box SUV shape, opting instead for coupe-inspired styling with a sloping rear roofline and a slightly longer bonnet. Some elements of the old car’s design will be retained, though, as hinted by this mule’s low-mounted headlamps and narrow grille.

The electric version of the production car is expected to adopt the same 50kWh battery pack as the Peugeot e-2008, returning a range of around 200 miles. A 10–80 percent charge should take around eight hours when the car is plugged into a 7.4kW wallbox charger.

By using the same CMP architecture as the 2008, Citroen’s C4 Cactus replacement will also receive a significant technology boost. We expect it will employ Peugeot's suite of driver assistance technology, as well as its 10-inch touchscreen infotainment system, digital instrument cluster and a reversing camera on higher-specced models.

Watch: Relive the ID.R’s Greatest Moments with this Documentary