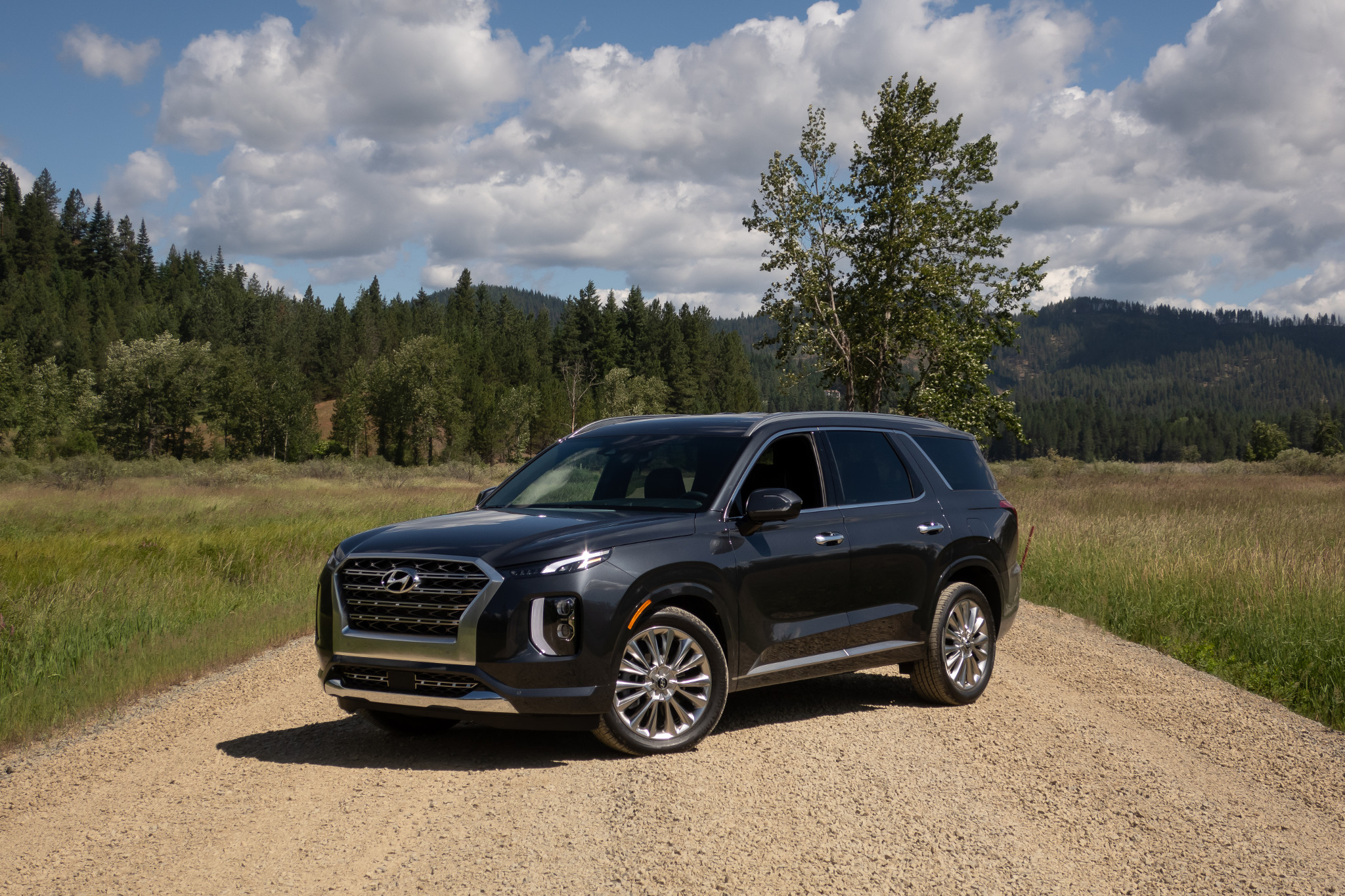 If I’m being honest, there are certain vehicles that are more exciting to test than others, and heading out to test the latest in what seems to be a never-ending line of three-row mid-size SUVs can leave me a bit … subdued, shall we say. However, there are exceptions to this — and I will say, without reservation, that I was hyped to be the first among our staff to drive the all-new 2020 Hyundai Palisade.

The reason for that is the Palisade’s close relative, the 2020 Kia Telluride, which is also new for 2020 and is very, very good. My colleague Aaron Bragman recently called it “the new big SUV benchmark,” the highest of praise. Like select other Hyundai and Kia vehicles, these two also share a lot of the same parts and DNA, which means that when one is good, the other likely is, too.

Hyundai was very quick to point out that all the things you can see and touch are different between the two vehicles, from the styling to the interior materials and switches to the graphics in the multimedia screen and instrument panel. On the flip side, that suggests that the things you can’t see are similar. The two vehicles share a powertrain, all-wheel-drive system (with a locking center differential), and the same basic body structure and wheelbase. Even the interior dimensions for legroom in each of the three rows are identical.

With all of that in common, it might seem that all I’d need to do is copy and paste our Telluride review, change out the name and call it a day. But I think that’d be selling the Palisade short. The Hyundai comes with a few enhancements that definitely have the potential to bump it past the Telluride in the minds of some shoppers. To test the Palisade, I traveled to Coeur d’Alene, Idaho, to spend a full day with the SUV to see where it shakes out among its competitors. (Per our ethics policy, Cars.com pays for its own lodging and airfare at such automaker-sponsored events.)

A similar powertrain, the 291-horsepower, 3.8-liter V-6 makes 262 pounds-feet of torque. An eight-speed automatic is the only transmission, and front-wheel drive comes standard on all trim levels (even the Limited). All-wheel drive is available as a $1,700 option. The Limited also comes with a standard self-leveling rear suspension, which the Telluride that I tested did not have, and it does seem to change the driving experience slightly. Ride quality was excellent on a variety of surfaces, from freshly paved highways to worn asphalt. Even on a gravel and dirt road, I was impressed by how tranquil the cabin felt as the wheels rolled over ruts and loose rocks.

The two vehicles drive roughly the same. If I had to attach a number to it, I’d say they are 95 percent analogous — you’ll really spot the difference only if you’re looking for it. But I was, and I think that the Palisade drives a hair better. That suspension certainly helped; I detected a bit less body roll and more confidence in cornering, but I also found that the transmission felt smoother and I was able to bring the car up to speed in an almost telepathic fashion.

Turbochargers are all the rage these days, but these two models show that a naturally aspirated V-6 with enough displacement, when well-connected to the rest of the drivetrain, can still get the job done. It’s an engine that goes about its job moving the Palisade without drama, and while it doesn’t necessarily feel very quick off the line, you can easily jump 20 mph by rolling your foot onto the accelerator pedal.

There’s still a decent bit of wind noise on the highway, though the day of our drive was quite windy, which contributed to it. The noise is not so great that it dominates the cabin, as I was able to have an easy conversation with a second-row passenger without raising my voice, and that’s a great litmus test for these family vehicles. If your voice needs to carry to the third row, the Palisade’s Driver Talk intercom system (also offered on the Telluride) will help out.

While the Telluride opts for rugged and rustic styling inside and out, the Palisade is chic and ready for a night out on the town. Liberal use of chrome in the grille and even on the 20-inch wheels of the Palisade I tested make the vehicle look more at home on Sunset Boulevard than on a farm, as the Telluride does.

Beyond the differences in appearance, there are a few key features that I think give the Palisade an edge, starting with the available 12.3-inch fully digital instrument panel. Digital displays to replace the analog speedometer and tachometer are becoming quite common, but I like the Palisade’s application in particular because of the clean, intuitive way that it presents information and uses the available screen space well.

Let’s say, for example, that you want to put the current state of the Palisade’s safety features in the center part of the screen while the adaptive cruise control is activated. You can do that, and the information that usually inhabits that part of the screen then shrinks down and moves to the middle of the graphical tachometer gauge, where it can still be seen at a glance.

The screen is also used to display the blind spot monitor image, which is like Honda’s LaneWatch system taken to the next level. It works for both sides of the vehicle, and when you bump the turn signal to the left or right, a live feed from a camera mounted on the side of the Palisade shows the blind spot in real time. If you signal left, it shows up in the speedometer on the left side of the display; if you signal right, it shows up in the tachometer on the right. When the display is active, your speed or rpm are shown in a noninvasive overlay. This is an improvement over having to turn your head to see the picture in the multimedia system; putting this information in the cluster makes it more accessible for drivers.

In the center console, the Palisade dumps the traditional gearshift for a push-button gear selector. I don’t like it, to be frank — it always requires you to hold the brake pedal down for an extra beat before it changes gears, and that gets frustrating. However, I think the change is a net positive because Hyundai took advantage of the recovered space to make two large storage spaces in the console. One houses the wireless charging pad and two cupholders, which can also retract to open up a bin completely as needed. It also adds another extra storage bin beneath that, which can be accessed from both sides. Hyundai says it’s a good place to store a pair of shoes, but I found that example to be weird — it’ll fit a small purse or the other various small items families need.

The final change is a powered third row, complete with helpful switches in the cargo area that allow you to lower both the second- and third-row backrests to expand it fully.

The Palisade’s interior is a highlight. Second-row passengers get a variety of charging options, some very comfortable captain’s chairs (in contrast to the new Ford Explorer) and even heating and ventilation. Third-row passengers also get two USB ports and power reclining, which comes in handy. The third-row bench isn’t particularly comfortable; it’s a bit thin on padding, so being able to lean it back a bit helps a lot with passenger comfort.

There is plenty of headroom back there, however, and the Palisade passes what I call the “three Brian” test. I set the driver’s seat to where I’d drive, move the second-row seat to a comfortable spot and then see how I fit all the way in the back. There was enough legroom for me to have two or three inches between my knees and the seat in front of it, so three 5-foot-11 adults can sit in a row in the Palisade. Do note that the third row technically has three seat belts, but you’re not squeezing three people back there — even children will find the hip and shoulder room to be quite cramped at that point.

Styling matches the exterior aesthetic, as there’s no hint of ruggedness or fake wood; it looks almost futuristic, especially when all of the bins are shut. The optional 10.25-inch touchscreen is mounted in the right place to be seen easily and, just as important, easily reached by the driver. I was able to reach the far end of the screen without leaning way forward, which is necessary with some of these larger touchscreens. It comes with standard Android Auto and Apple CarPlay, though be wary that if you use Android Auto, it won’t currently take up the whole screen; score one for the Apple folks on this front. (As we’ve reported, a future update to the Android Auto app should address this limitation.)

I came away from my six or so hours behind the wheel of the Palisade quite enamored with it. Everything about the design and technology feels intentional. It’s loaded with features and a pretty good driving experience to boot.

Then I looked at the price tag and just about fell over. Hyundai tells us that fully loaded, the Palisade comes in at about $300 less than the Telluride. My Limited AWD test vehicle came out to $47,605 after destination charges, and it feels like all that and more. The value proposition for the Telluride is pretty insane compared with the rest of the class, and the Palisade, with its added features, is even better.

Look at this compared with the redesigned 2020 Explorer models that I tested recently. The Palisade was about $10,000 less than the Explorer Hybrid that I tested (which didn’t have as much equipment) and about $14,000 less than the Explorer Platinum. The South Korean automakers now offer quite a one-two punch on value in this segment that is impossible to ignore — and that’s without factoring in that robust 10-year/100,000-mile powertrain warranty as well.

The 2020 Palisade fully lived up to my high expectations and more. It’s a fantastic addition to a crowded class, and my hope is that it makes the rest better, because y’all got some catching up to do. 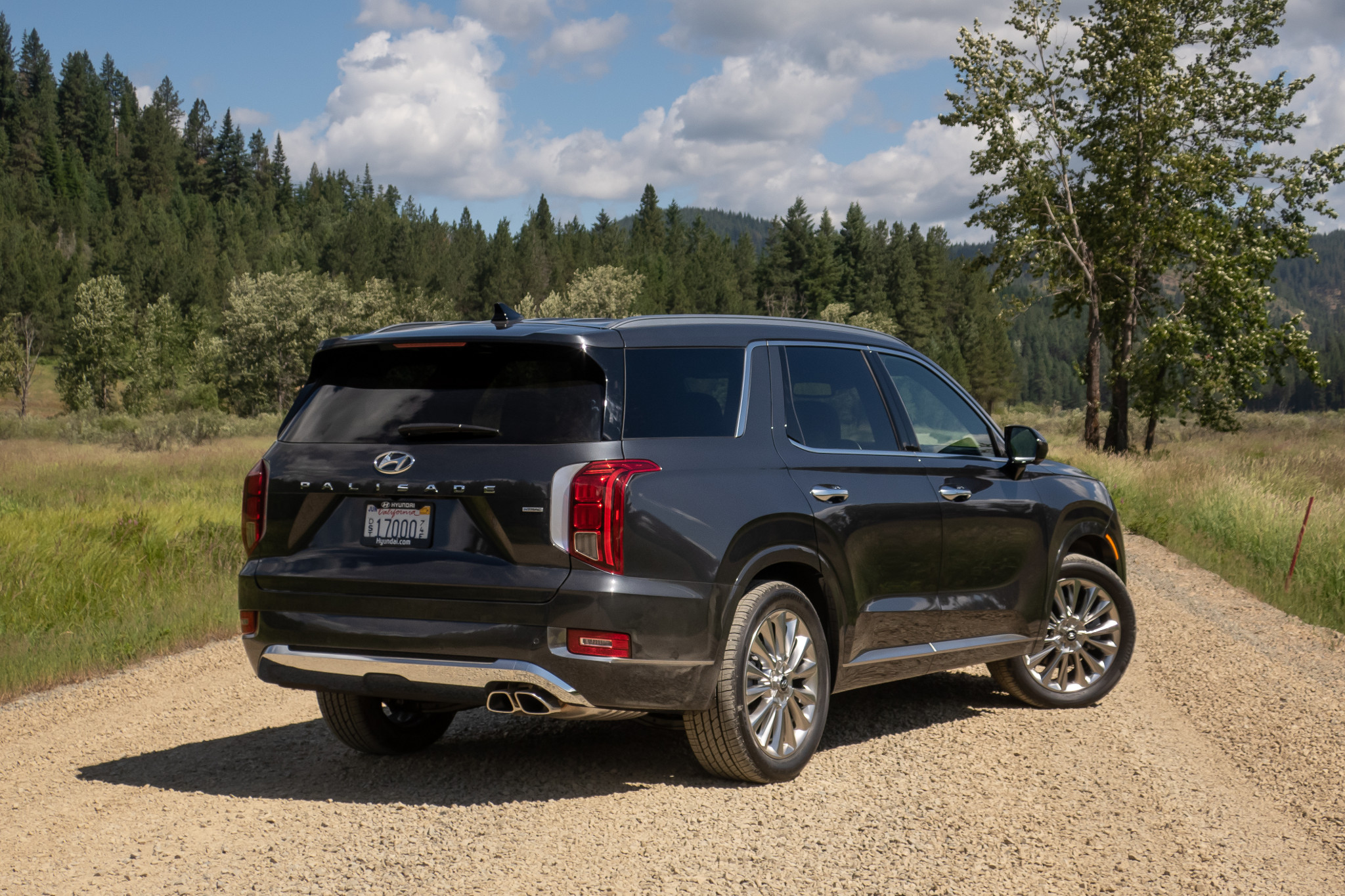