The Toyota Camry has enjoyed a healthy run as America’s best-selling midsize car over the last 19 years. However, competitors like the Honda Accord, Hyundai Sonata, and Kia K5 have really stepped up to the plate, pushing what consumers come to expect in terms of technology, value for money, and comfort, effectively shrinking the Camry’s lead. With its rival’s sales figures growing steadily, this sensible sedan has to offer more to stay on top.

The 2021 Toyota Camry we’ve been testing is an XLE V6, the second-highest trim level available, with a $37,079 price tag. In theory, our well-optioned tester should showcase this vehicle at its best. Instead, we get a sedan that, while comfortable, good-looking, and well-equipped, lacks its competitors’ refinement, handling characteristics and overall charm.

A vehicle’s ratings are relative only to its own segment and not the new-vehicle market as a whole. For more on how Motor1.com rates cars, click here. 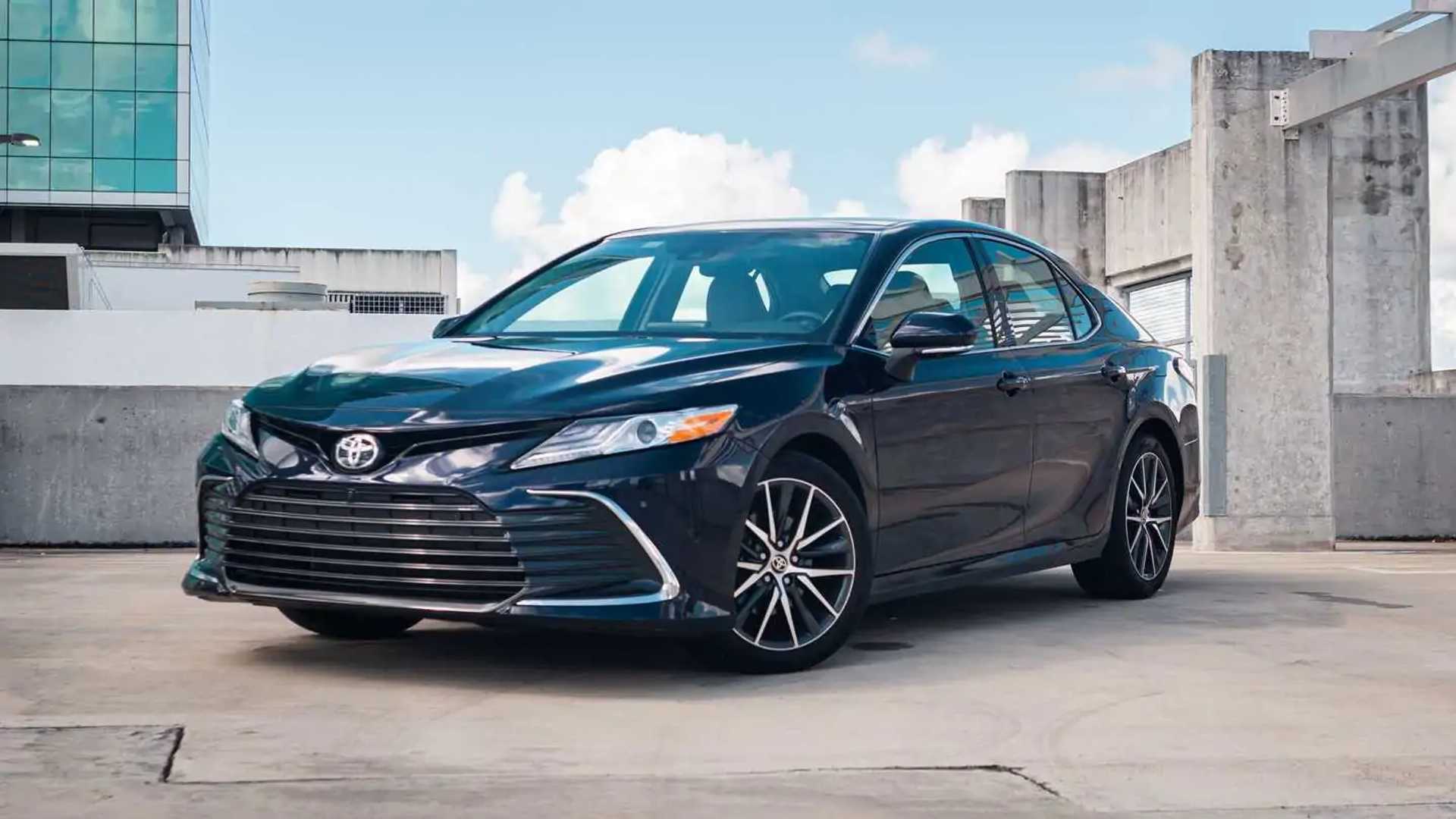 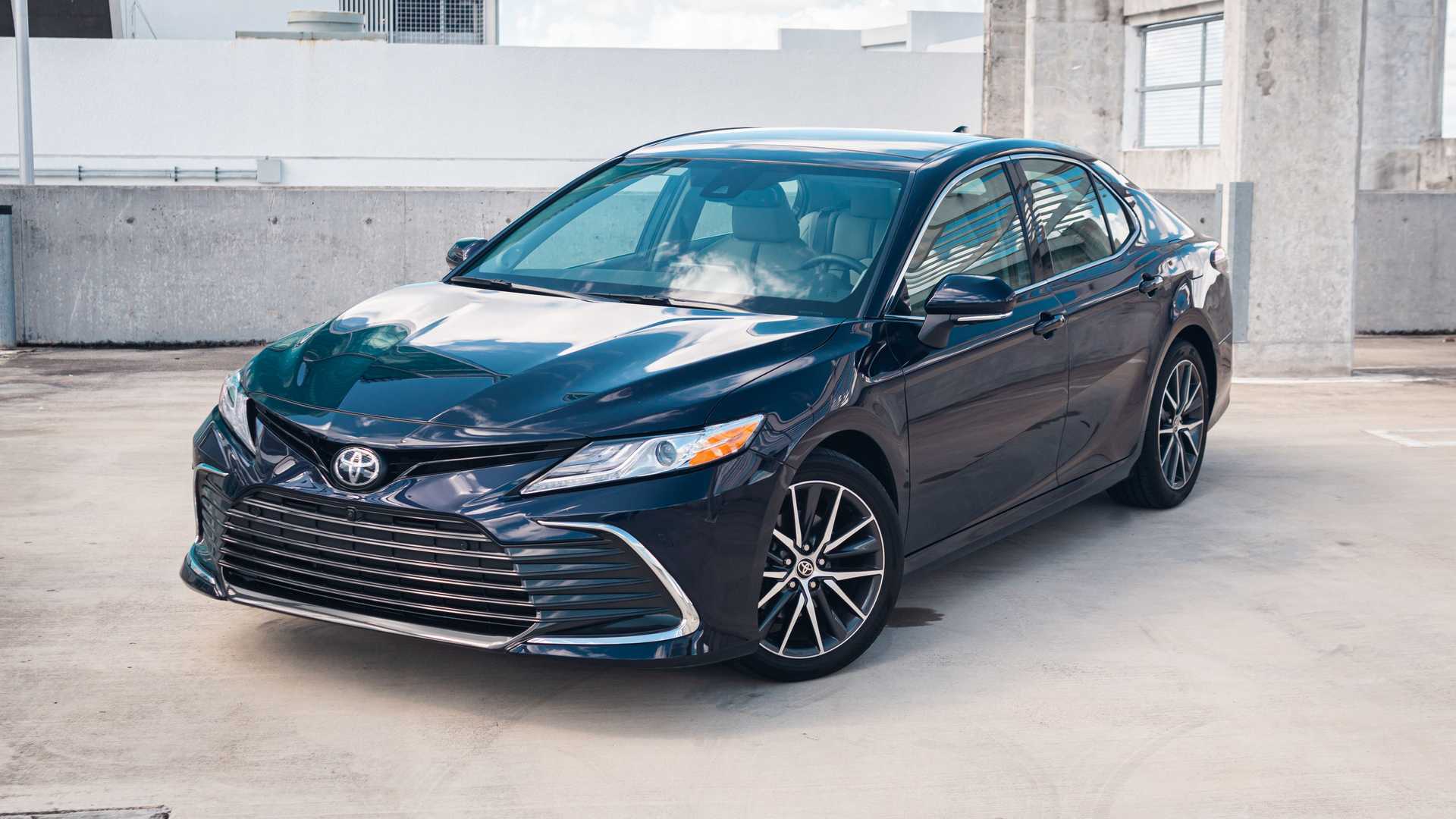 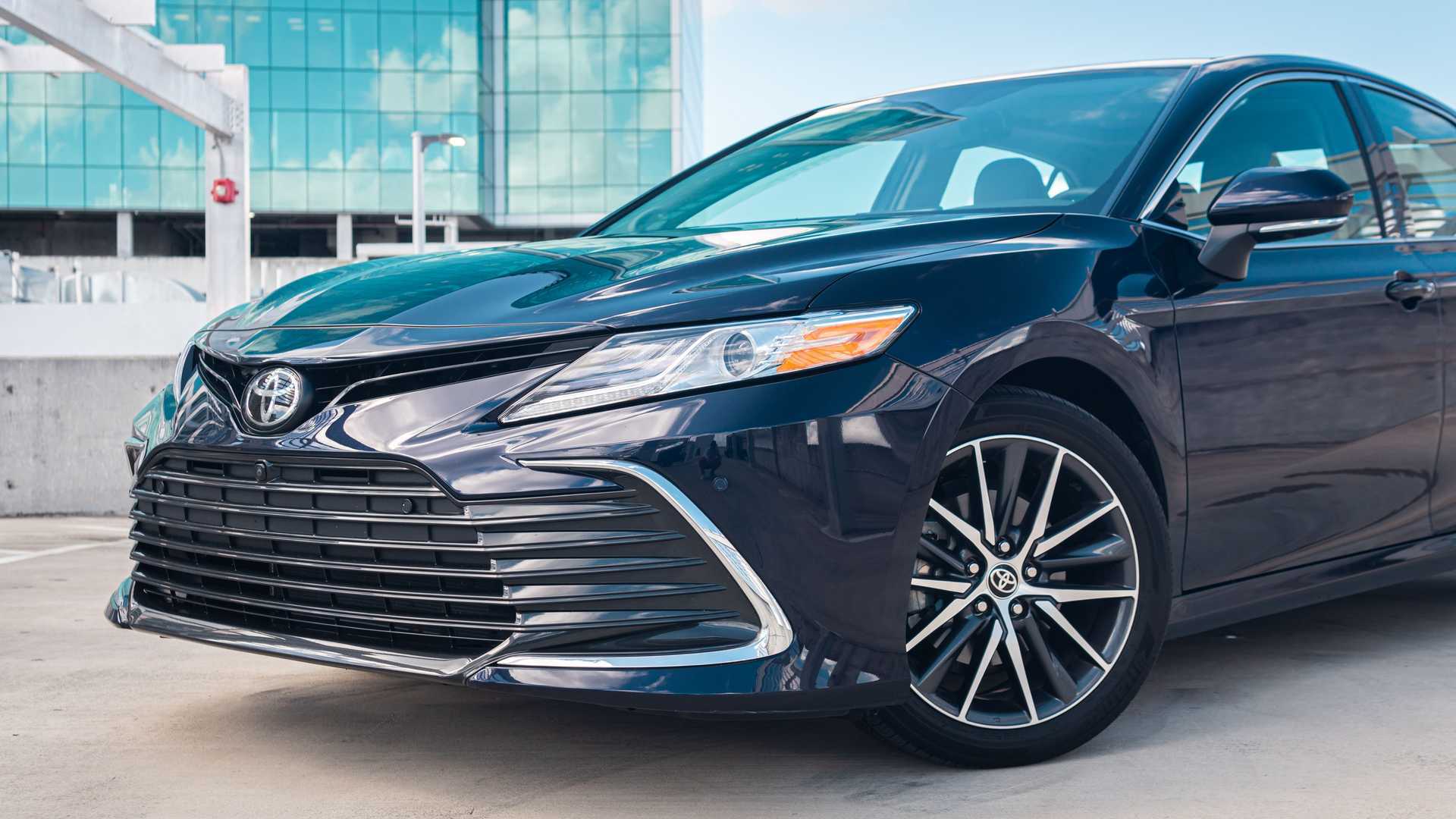 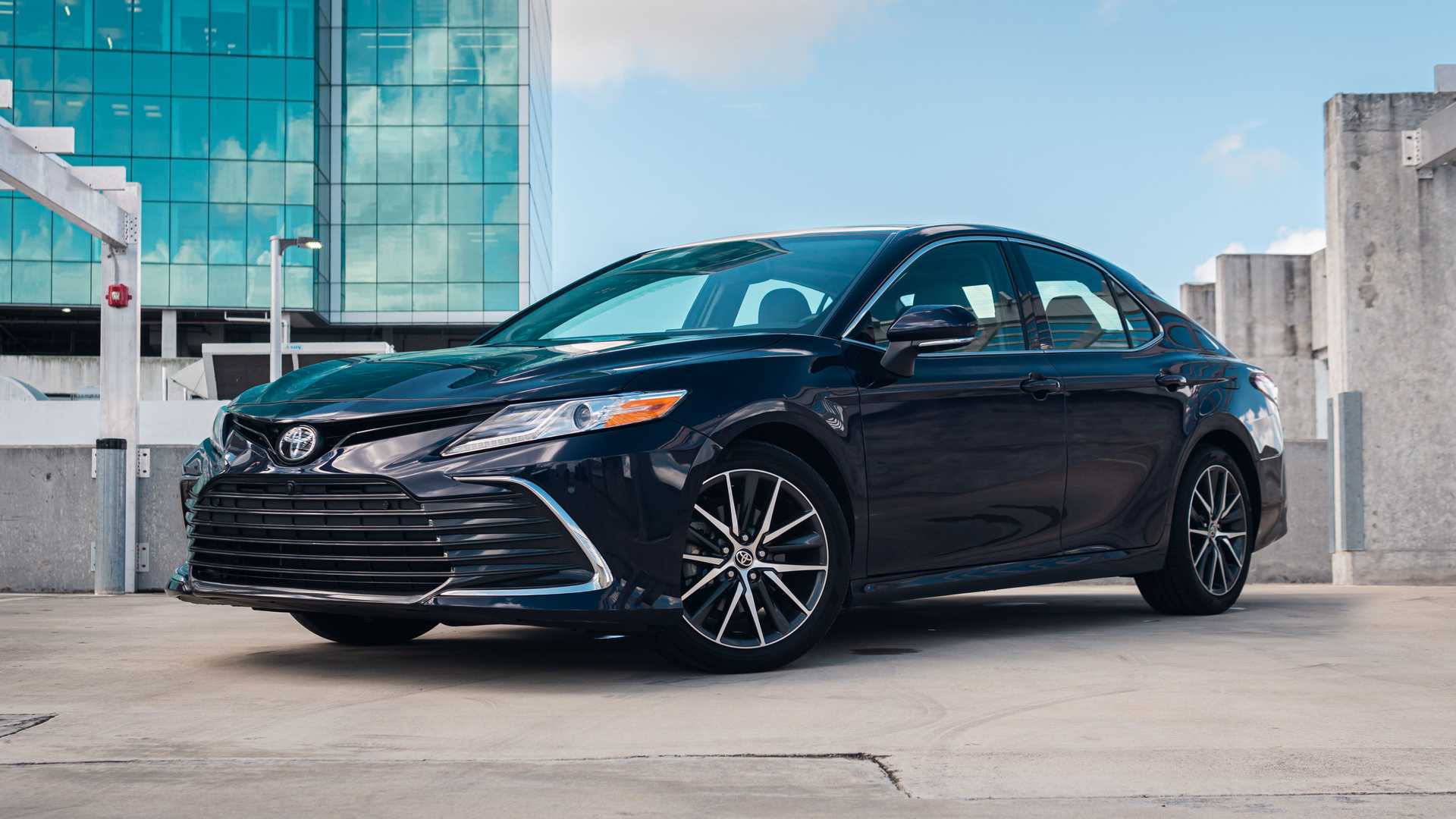 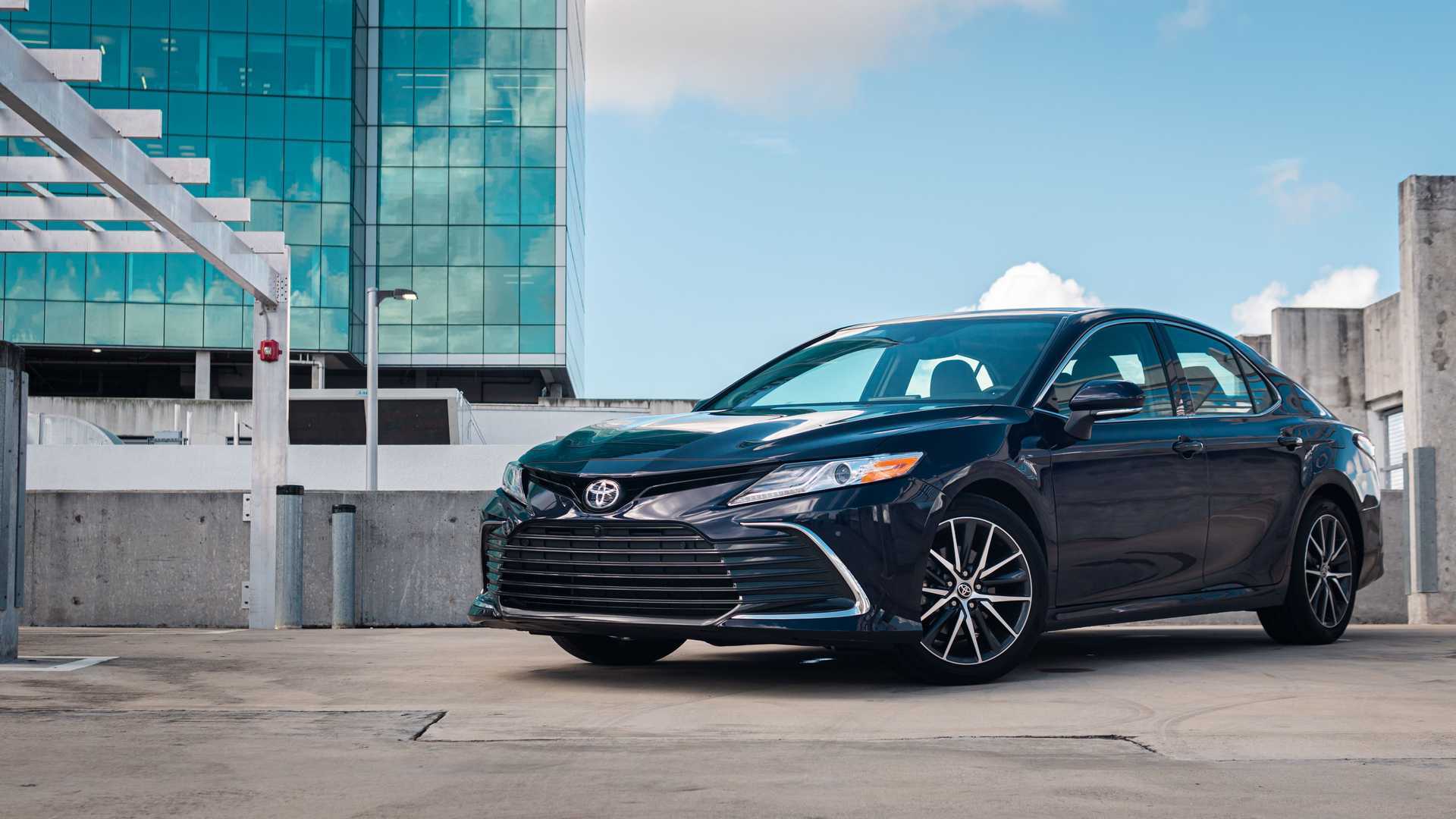 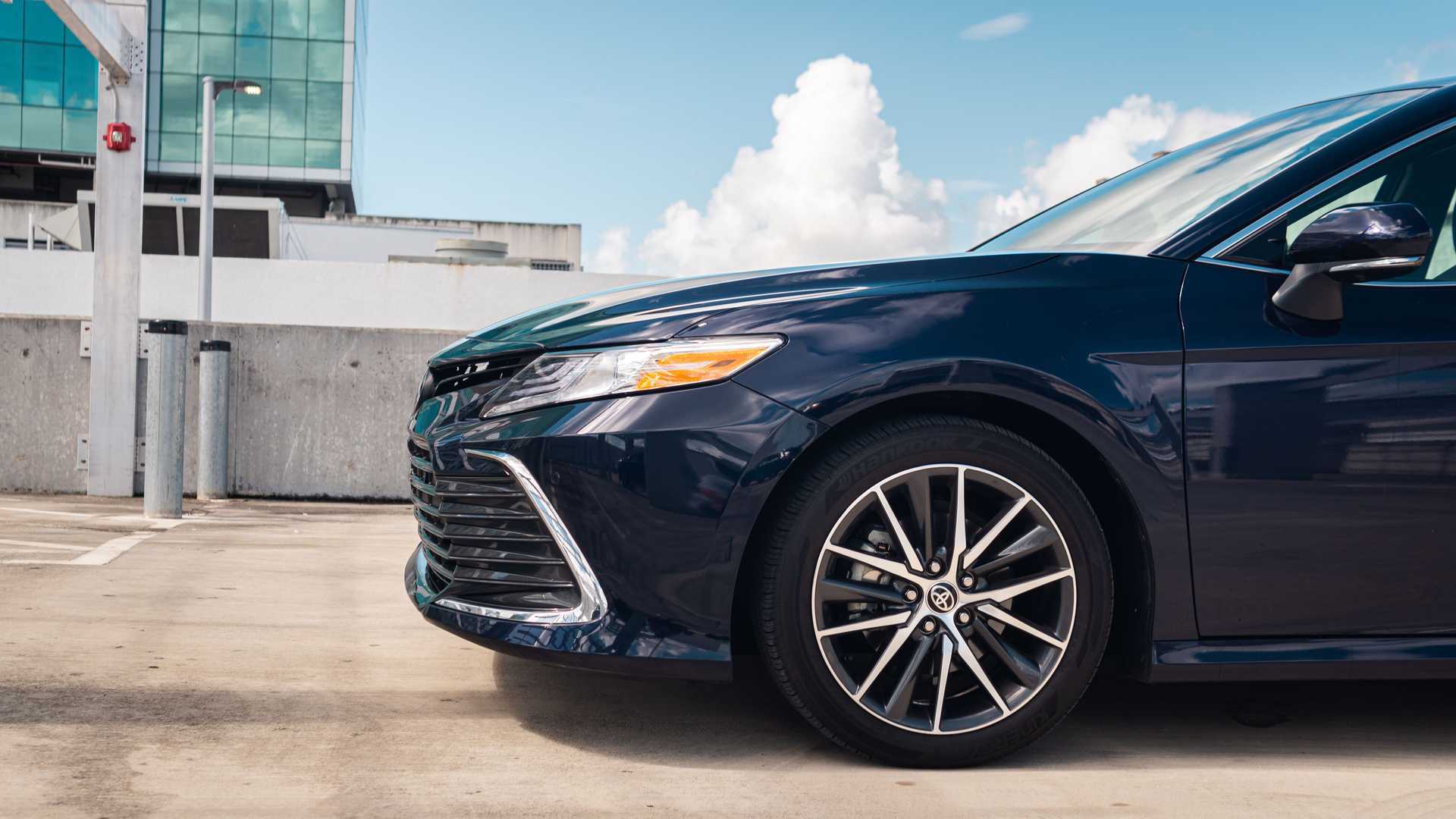 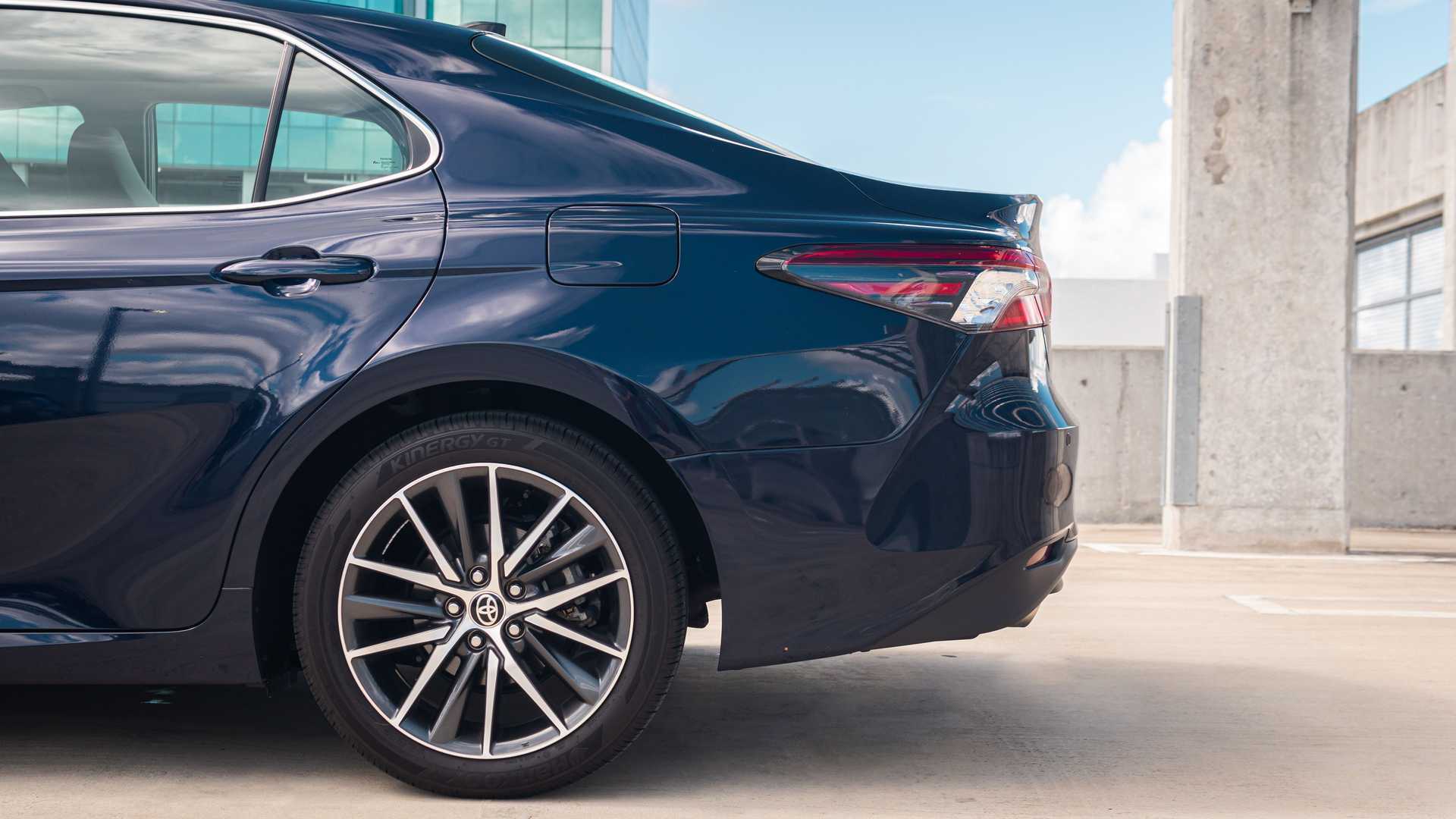 The current Toyota Camry has been around since 2018, and despite being over four years old at this point, it’s aged well. Horizontal lines in the Camry’s grille help visually widen the car as they nearly span the width of the front bumper. Chrome trim surrounds the grille, contrasting our tester’s dark Blueprint paint.

Along the sides, a strong shoulder line connects the front and rear quarter panels while cutting through both doors. This sharp styling element helps break up the smooth lines of the Camry’s sides, making it look sportier. Chrome surrounds the windows, although it doesn’t provide as much contrast as in the front, likely due to the light passing through the glass.

The rear of the Camry plays it safe with tamer styling elements. While the large boomerang-shaped LED taillights stand out, the black plastic diffuser blends in, especially on a vehicle wearing darker paint. The primary styling cue that connects the rear to the front is a single prominent line that almost runs the bumper’s width.

Despite our tester being an XLE, this loaded Camry doesn’t look all that different from its cheaper alternatives. One of the main differentiating factors is the set of 18-inch wheels, upgraded from the 17s found in the base model. Additionally, the XLE benefits from LED daytime running lights. If you want even sportier styling for this sensible sedan, you’ll need the SE, XSE, or TRD trim levels.

The exterior differences between our XLE and a base LE don’t immediately stand out, but their interiors are miles apart. The seats in our tester featured Toyota’s SofTex material, a faux leather that visually, at least, gets close to the real thing. While the material is ultra-soft to the touch, its smooth texture and overall lack of heft feel a bit flimsy. Despite this, SofTex is a significant upgrade over the rough-feeling fabric options found in lower trim levels. The synthetic leather also covers parts of the dash, door panels, and door cards, meaning that most of the surfaces you touch feature it instead of rubber or hard plastic, making the interior feel slightly more premium.

For the 2021 model year, Toyota opted to axe the 7.0-inch infotainment screen that sat flush with the dash in favor of one of identical size that sticks out vertically instead. While the rest of the layout remains largely unchanged, this one element significantly transforms the car’s interior aesthetic, interrupting the soft lines of the dash with a prominent rectangle in the middle. As a result, the Camry’s interior feels a bit disjointed, as if the screen was an afterthought.

Looks-aside, the Camry’s interior is a comfy place to be. With a pair of 8-way power-adjustable front seats, dialing in the correct seating position is easy. Additionally, the chairs have excellent padding, providing good comfort even over long distances. The position of the chairs means that getting in and out of the Camry is not a challenge. While heated seats come standard on the XLE, cooling is an optional extra.

Detracting from the front row’s comfort is the Camry’s 38.3 inches of headroom. For context, competitors such as the Hyundai Sonata and Kia K5 both offer 40 inches or more, leaving the Toyota feeling a bit more cramped in comparison. Overall, the car’s front has less of an open, airy feeling than what you get in either the Hyundai or Kia.

The Camry’s second row is rather average for the class. With 38.3 inches, there’s slightly more headroom than the sunroof-equipped K5 or Sonata (37.4 inches each), and a healthy advantage in leg space at 38.0 inches to 35.2 and 34.8, respectively. But if you really need space, the Honda Accord’s 40.4 inches of legroom makes up for its negligible disadvantage in head space. The Camry also struggles to haul cargo – its 15.1-cubic-foot trunk trails the competition, all of which pack 16 cubes or more.

While both rows of seats are relatively cushy, the Camry’s soft suspension also helps, which excels around poorly maintained city streets and large highways alike. The suspension strikes a good balance with a plush enough ride without leaning on being overly mushy. This places the Camry pretty much on par with other competitors in the segment.

The 2021 Toyota Camry comes well-equipped, even in its most basic form. As standard, you get a 7.0-inch infotainment screen with wired Apple Carplay and Android Auto connectivity. However, the larger 9.0-inch screen in our tester comes standard on the XLE and XSE, but is optional on the LE, SE, and TRD.

While the larger touchscreen is easy to operate thanks to its proximity to the driver, it’s still smaller than the 10.25-inch units available in the Kia K5 and Hyundai Sonata. Additionally, the Camry’s screen feels a bit slow, so switching through the infotainment system’s many pages and menus can be a laggy experience at times.

There is also a clear drop in overall resolution compared to the screens found in the Hyundai Sonata and the Kia K5. The same goes for the analog instruments in front of the driver. While they certainly seem built to last, they look dated. In contrast, most competitors now offer fully digital instrument clusters at this price point, as well as center touchscreens measuring 10 inches or more.

Our 2021 Toyota Camry XLE features the most powerful engine in its class, a 3.5-liter naturally-aspirated V6 that produces 301 horsepower and 267 pound-feet. This is a significant increase over the base model’s four-cylinder and its 203-hp and 186-lb-ft output. All of that power goes to the front wheels via an eight-speed automatic transmission. All-wheel drive is available, but only with the four-cylinder engine.

The V6-powered Camry is quick. While it lacks the low-end torque of turbocharged competitors, mid-range performance is strong. Alongside the power, the naturally-aspirated engine delivers a throaty sound that permeates the cabin during hard accelerations but remains subdued the rest of the time.

However, the Camry remains a somewhat underwhelming drive in terms of fun. Its ultra-light steering doesn’t provide much feedback, and its chassis doesn’t feel quite as capable as what you get in the Mazda6 or Honda Accord.

The full-speed adaptive cruise control system works well on the road, maintaining a steady distance to following cars. Lane tracing is a helpful addition, but the Camry isn’t quite as confident through highway bends and on ill-defined lanes as Hyundai or Kia’s Highway Driving Assist system.

Our tester also featured blind-spot monitoring with rear cross-traffic alert, an optional extra on the LE and SE trim levels, but standard on the XLE, XSE, and TRD. The Camry’s safety offerings fall closely in line with what its competitors offer, with none giving you blind-spot monitoring as standard.

On paper, the Camry’s V6 offers up average fuel efficiency ratings of 22 miles per gallon in the city, 33 highway, and 26 combined, despite packing more power than turbocharged rivals. For context, the most powerful versions of the Kia K5 and Honda Accord have combined ratings of 27 and 26 mpg, respectively. As a result, having the most powerful midsize sedan doesn’t require a considerable efficiency trade-off.

At the top end of the Camry’s trim levels, the question of value becomes more important. Since most of the Camry’s best features come as standard, spending $5,000 more to have the V6 is hard to justify. The four-cylinder version of the XLE offers up the same premium features that make our tester a great daily driver. While you won’t have the quickest car in the segment, the cheaper version of the XSE is where you get the most for your money.

With Apple Car Rumors Returning, So Are The Renderings