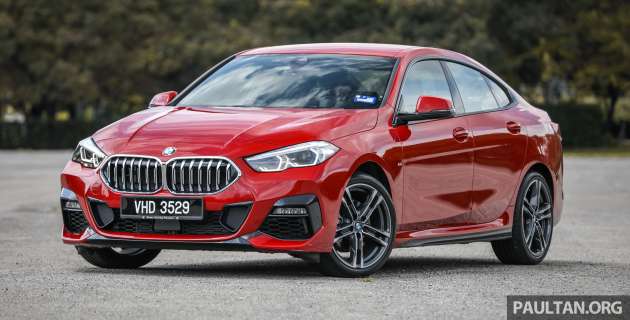 We finally have the 2022 BMW 218i Gran Coupé M Sport in Malaysia, replete with the latest infotainment upgrade that was introduced in November. We have a full video review coming soon, but until then you’ll be able to check out our full gallery of the revamped compact four-door coupé below.

To recap, the car was launched back in 2020 with the BMW Live Cockpit Plus, which consisted of an 8.8-inch centre touchscreen and an analogue instrument cluster with a 5.1-inch multi-info display. This clearly wasn’t enough in the premium sector – especially since the Mercedes-Benz A-Class Sedan came as standard with twin 10.25-inch displays.

So BMW Malaysia has decided to throw in the range-topping Live Cockpit Professional system, with twin instrument and infotainment screens that match its sworn rival (and the 3 Series, in fact) in terms of size. The BMW Operating System 7 it comes with actually trickled down to the Plus system last year, but the larger displays make full use of the interface’s big customisable widgets.

This means that with the five-year warranty and service package, the 218i sails past the RM220,000 mark at RM221,817, which is over RM1,300 more expensive than the A 200 Sedan. The latter was itself given an update this year that finally gave it a power-adjustable passenger seat.

Thankfully, this feature was already fitted to the 218i, together with the driver’s seat (the latter also getting a memory function). What’s more, the BMW also continues to get rear air-conditioning vents as part of its dual-zone automatic climate control, which was added to the A 200 when it became locally assembled but was then omitted again with the update.

However, a few features have also been deleted from the 218i’s kit list, presumably due to the global chip shortage. You no longer get the BMW Digital Key for your iPhone, nor the Qi wireless charger. You also lose the powered bolster adjustment on the passenger seat (it’s now on the driver’s side only), although that’s less important than lumbar adjustment, which is still missing on most BMWs sold in Malaysia.