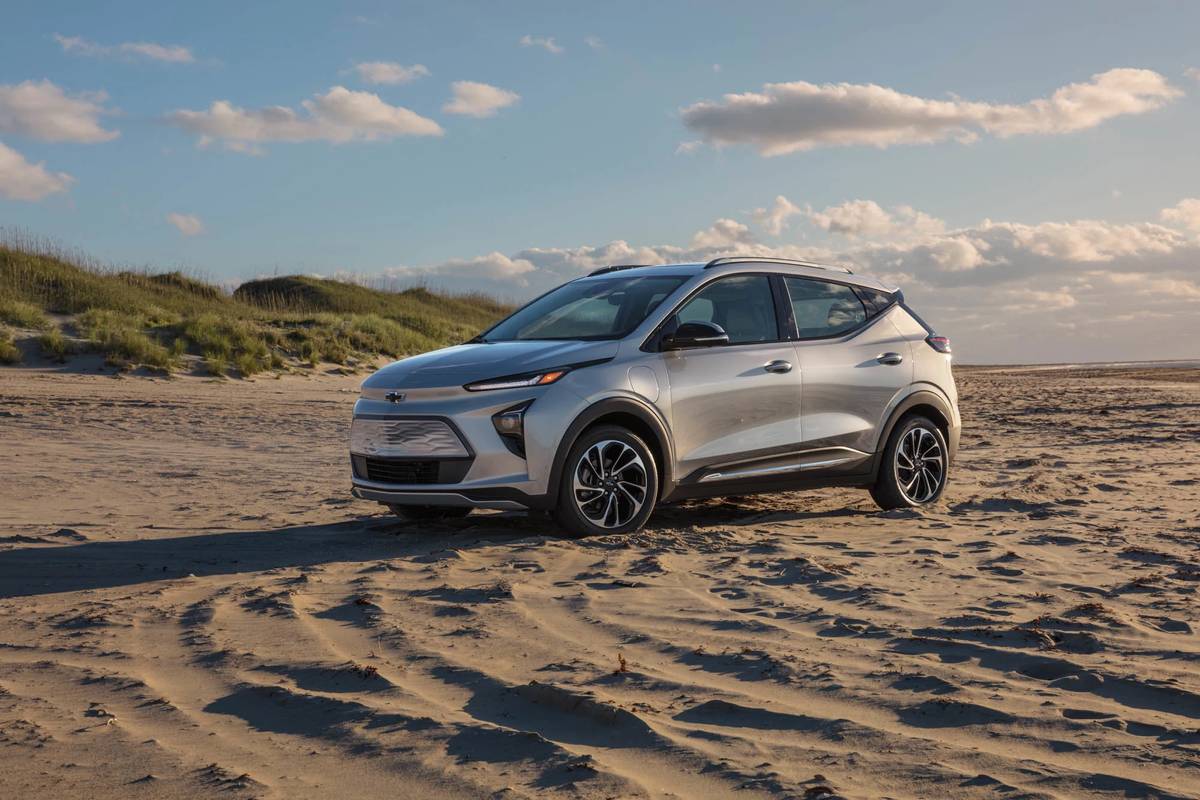 Chevrolet has unveiled two new all-electric models for the 2022 model year in a joint marketing effort with entertainment giant Disney. One is a mid-cycle refresh on the company’s first widely available electric vehicle, the Bolt EV. The second is a slightly larger version of the vehicle that Chevy is calling the Bolt EUV. The two will share a common platform, battery and powertrain, but the Bolt EUV comes in a bit longer, taller and heavier, according to the brand.

The Bolt EV gets a significant update to its styling, adopting a new “high-eye” daytime running lamp and turn-signal indicator combination that we’ve now seen many automakers adopt industrywide. It’s a more upright front end than the previous model, and it extends a character line down the side to the redesigned rear.

The Bolt EUV shares a similar look with the smaller Bolt EV, but it shares no sheet metal with its younger sibling at all. Put the two side by side, though, and you might be hard-pressed to know which is which, at least until you get a look at the profile and realize one is visibly longer than the other — with seemingly all the additional length coming in the rear doors and cargo area. The 6-inch stretch to the Bolt EUV over the Bolt EV (this uncreative naming convention is already getting tiresome, Chevrolet) allows for 3 inches of additional backseat legroom and additional cargo room, two items on the list of Bolt EV customer feedback that Chevy decided to address.

It’s inside where most of the significant changes have been made, as the Bolt EV gets a new interior that looks considerably more upscale than the outgoing model’s. New soft-touch materials abound, and a new, more conventional shape is used for the instrument panel. Finally the issue of seat comfort gets some attention, with Chevy replacing the old Bolt EV’s unloved thrones with all-new units featuring triangle-themed upholstery. The EV and EUV appear to share common interiors, which makes sense given that they’re largely the same vehicle, just one seemingly scaled to 110% of standard size.

The interior has some other definite improvements, such as the replacement of the often-fussy paddle-style gear selector with a push-button-and-toggle selector that now features a dedicated button for one-pedal driving (where the regenerative braking function of an EV kicks in aggressively whenever you lift off the accelerator pedal, meaning you rarely need to touch the brakes). A 10.2-inch touchscreen is standard, and a reconfigurable color 8-inch display behind a new flat-bottom steering wheel acts as the gauge cluster. Heated and ventilated front seats, and heated outboard rear seats are optional.

On the tech front, a wireless phone charging panel is standard (but only on the Bolt EUV), while wireless Apple CarPlay and Android Auto come on both models. The Bolt EUV will also be the first Chevrolet to offer Super Cruise, GM’s advanced semi-autonomous self-driving system. It allows drivers to set the system on highways that have been mapped by GM’s partners and take their hands off the wheel for extended periods of time, with the car maintaining lane, speed and distance. Unlike the new Super Cruise system available in the latest Cadillac Escalade, however, the Chevrolet system will not support the lane-change function that debuted in the luxury brand’s SUV. (GM’s brands are Buick, Cadillac, Chevrolet and GMC.) Super Cruise will be packaged with the Premier trim on the Bolt EUV; it’s unavailable on the Bolt EV.

One area that did not see much change is the powertrain, as the Bolt EV features a carryover battery pack and propulsion unit. The single-motor electric drive unit pumps out the equivalent of 200 horsepower and 266 pounds-feet of torque through the front wheels. Despite being called a “utility vehicle,” the Bolt EUV uses the same powertrain; it won’t feature all-wheel drive. The battery is also unchanged — it’s a 65-kilowatt-hour, liquid-cooled lithium-ion pack that received some optimization, according to Chevrolet engineers, but this hasn’t resulted in any improvement to range. Chevy says that the Bolt EV will be rated to go 259 miles on a full charge, while the mechanically identical but slightly larger Bolt EUV should see its range drop to a still-respectable 250 miles.

Charging has changed up a little bit, with DC fast-charging capability now standard on both the EV and EUV. Both models will also come with a new dual level charge cord, which has a plug adaptor that allows it to plug into both a 120-volt household outlet or a more powerful 240-volt outlet, like one might have for a clothes dryer or electric oven. It’s designed to allow owners to charge from home without having to purchase a pricey charging unit — simply have a 240-volt line run to your parking area, and the charging cord that comes with either Bolt will be able to connect to it at up to a 7.2-kilowatt rate. Chevrolet will even help you get that set up, as it’s announced a partnership with a firm called Qmerit that will cover the cost of installing a 240-volt, Level 2 charging line in eligible customers’ homes. On dedicated charging stations, the Bolts can actually charge at a rate of up to 11 kilowatts, but the cord is only rated for the lower amount. At this level, Chevy estimates that a Bolt battery can add about 25 miles of range per hour of charge time. On a DC fast-charge unit, however, the Bolt EV can add about 100 miles of range in 30 minutes (95 miles for a heavier Bolt EUV).

Instead of working on range improvement or battery capacity, it seems that Chevrolet has instead worked on the value equation for its electric offerings — something necessary, as GM has now sold enough electric cars that it no longer qualifies for the $7,500 federal tax credit that helps lower the price on such vehicles.

The starting price for both 2022 models is significantly less than the starting price for the 2021 Bolt EV. The smaller 2022 Bolt EV starts at $31,995 (all prices include the destination fee), more than $5,000 less than the outgoing model, while the all-new Bolt EUV starts at $33,995. A limited-production, loaded Launch Edition of the Bolt EUV is also available for $43,495; it features Super Cruise, a moonroof, unique wheels, special badging and an illuminated charge port. That Bolt EUV Launch Edition is available for reservation first, as ordering has just opened for it at www.chevrolet.com. Both models will begin deliveries into showrooms sometime this summer.