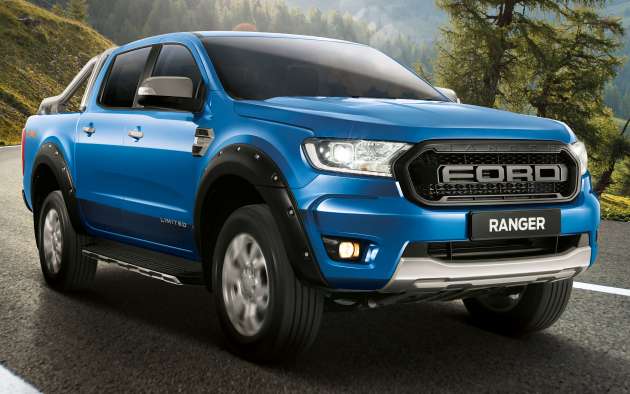 No, the new Ford Ranger still hasn’t landed on Malaysian shores, but to tide us over, distributor Sime Darby Auto Connexion has released a new variant of the current T6 model. This is the Ranger XLT Plus Special Edition, which adds a number of aesthetic goodies to the mid-range XLT Plus.

The gussied-up pick-up is priced at RM136,888 nett, excluding insurance, road tax and registration. This makes it around RM6,000 more expensive than the standard XLT Plus, which retails at RM130,820 nett. As usual, this figure includes a five-year/160,000 km warranty, introduced last February.

This Special Edition will likely be a hit among Ranger buyers, as it includes three of the most popular modifications today. The most obvious of these is the Raptor-style grille, replete with the Ford script in block letters. We should point out that this is not the same unit as the Raptor’s, as the logo is slightly smaller and it also has the Ranger script on the top edge.

You also get black plastic wheel arch extensions with fake Allen bolt heads, along with a tube-style sports bar at the back. Inside, there are illuminated side sill scuff plates and a front dash cam with a 32 GB memory card and smartphone connectivity via an app.

Otherwise, the specifications are identical to the XLT Plus. Power comes from the latest 2.0 litre EcoBlue single-turbo four-cylinder diesel engine, producing 180 PS and 420 Nm of torque. A ten-speed automatic gearbox, four-wheel drive and a limited-slip rear differential come as standard.

Safety-wise, the Special Edition continues to come with just two airbags, although stability control, hill descent control, trailer sway control and rear ISOFIX child seat anchors are standard. The truck will be previewed at Queensbay Mall in Penang from February 24 to 27 and will be available to view at all Ford showrooms from March 10 onwards.