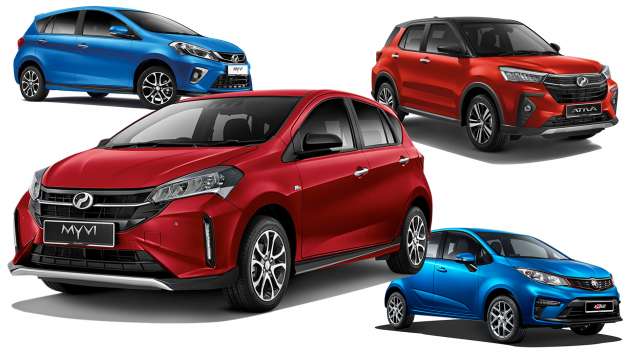 The new Perodua Myvi facelift was launched last week, bringing with it a number of significant changes like revised styling, an updated kit list and more safety features. Malaysia’s most popular hatchback also gets a new transmission, specifically the Ativa’s D-CVT to replace both the pre-facelift car’s four-speed automatic – the five-speed manual has been discontinued.

While the D-CVT is new, the new Myvi carries over the Dual VVT-i, DOHC NR four-cylinder engines from before. These include the 1NR-VE 1.3 litre unit rated at 95 PS (94 hp) and 121 Nm of torque, while the other option is the 2NR-VE 1.5 litre that makes 103 PS (102 hp) and 137 Nm. So, with the same engines but a new transmission, how much has the Myvi’s maintenance costs changed?

Well, that’s what we’re looking at in this post, as we’ll compare the running cost of the D-CVT-equipped Myvi over five years/100,000 km, comparing it to the previous, 4AT-equipped model as well as its direct (and also facelifted) rival, the Proton Iriz. To widen the comparison, we’ve also brought in the Ativa, which in its base form, is priced RM2,700 more than the top-spec Myvi, so it’s something car buyers might consider if their budget allows.

Based on the figures pulled from the websites of both carmakers, the new Myvi is cheaper to maintain than the pre-facelift model over five years, albeit only slightly at around RM55 – this is for both the 1.3L and 1.5L variants. Looking at the maintenance schedules of both, we find that the newer Myvi requires its CVT fluid replaced once compared to the 4AT-equipped model that needs two transmission oil changes over five years.

However, this cost difference is somewhat offset by the number of times the cabin air filter is replaced for the facelifted model, which is two more than before. It should be noted that Perodua did not provide a list of Pro Care preventative maintenance options for the newer model.

The pre-facelift’s optional Pro Care service items include additional engine air intake filter, brake fluid and spark plug replacements, along with options for air-conditioning major service as well as the tyre alignment, balancing and rotation, all of which adds nearly RM1,000 to the total over five years.

Compared to the Iriz that is offered with 1.3 and 1.6 litre engines, both the new and pre-facelift Myvi are cheaper to maintain by around RM639 and RM584 respectively. The maintenance schedules show the Iriz’s semi-synthetic engine oil is cheaper than the Myvi’s fully-synthetic, as is the cost of replacing its air intake filter and spark plugs – despite more frequent replacements.

However, the Proton hatchback’s N95 cabin filter is costlier and it requires more frequent radiator coolant replacements. Additionally, the Iriz needs fuel filter and FEAD belt replacements, which isn’t the case for the Myvi, while the cost of changing the Iriz’s CVT fluid is more by comparison.

The Ativa is also cheaper to maintain over five years than the Iriz, although it’s still more than the latest Myvi by around RM233. Comparing the maintenance schedules, the Ativa’s spark plugs for its 1KR-VET 1.0 litre turbocharged three-cylinder engine appears to be the biggest contributor to the difference, costing a little over double that of the Myvi, while the other items cost roughly the same.

As always, there’s more to overall running costs than just what you pay at the service centre, including the cost of annual insurance and road tax. The Iriz and Myvi are identical in terms of road tax – RM70 for the 1.3 litre models and RM90 for the 1.5 litre and 1.6 litre models – although the Ativa is the cheapest, as its 1.0 litre engine commands a road tax of just RM20.

Other factors are consumables like brakes and tyres, with the latter varying based on wheel size – typically the larger, the costlier. The Myvi’s wheels range between 14-15 inches in size, the Iriz is between 15-16 inches, while the Ativa is from 16-17 inches.