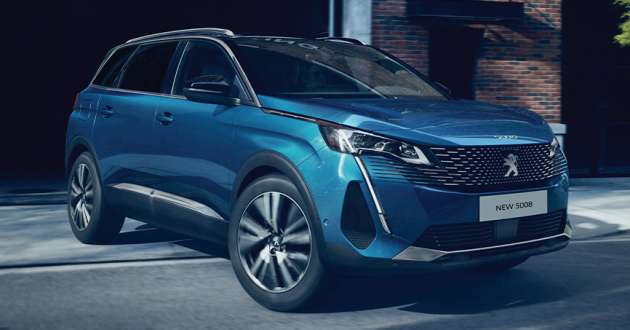 The second-generation Peugeot 5008 facelift has been launched in Thailand, with a single Allure variant being offered to customers there. Priced at 1.869 million baht (RM233,083), the seven-seat SUV comes fully imported (CBU) from Malaysia, built at the Naza Automotive Manufacturing plant in Gurun, Kedah that is now completely owned by Stellantis.

Styling changes that are part of the facelift include new LED headlamps that blend seamlessly into a frameless radiator grille. Like the smaller, five-seat 3008, there are also vertical LED daytime running lights running along the sides of the front bumper, which also double as signal indicators, while the model number is placed just above the lion badge.

Moving to the rear, there are full LED taillights with a slimmer version of Peugeot’s three-claw lighting signature, sequential turn signals and a darker lens tint. For the Thailand market, the 5008 comes with 18-inch alloy wheels, LED fog lamps, a panoramic sunroof, a hands-free powered tailgate and a choice of four colours (Amazonite Grey, Nero Black, Pearl White and Emerald Crystal) – paired with a Black Diamond roof.

Inside, the Peugeot SUV gets the brand’s i-Cockpit concept that features a 12.3-inch digital instrument display and a small-diameter steering wheel, while the size of the infotainment touchscreen has been increased from eight to 10 inches.

Belfort Automobile (Thailand) Co, a subsidiary of Master Group Corporation Asia (MGC), has been the authorised importer and distributor of Peugeot cars in Thailand since being appointed by Groupe PSA (now part of the Stellantis merger) in 2019.

After Thailand, the 5008 is set to make its debut here, together with the latest 3008. As it is known now, sales and distribution of Peugeot models in Malaysia is currently handled by Bermaz Auto Alliance (BAASB), a subsidiary of Bermaz Auto (BAuto).