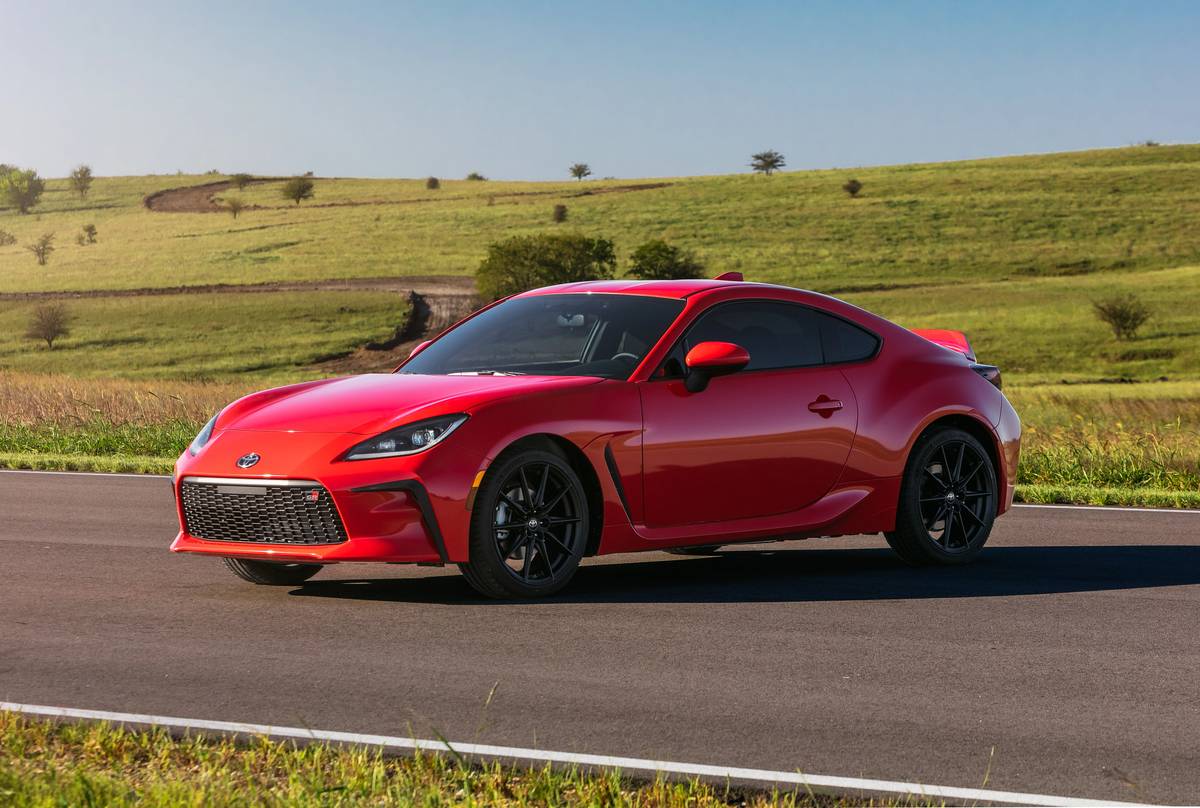 Looks like: An updated 86 and, not surprisingly, the already-announced 2022 Subaru BRZ

Toyota’s 86 two-door, four-seat coupe is getting a redesign for the 2022 model year along with a slightly new name. Now the GR 86 — GR stands for Gazoo Racing, Toyota’s in-house performance and motorsports division — the coupe gets a redesigned exterior that Toyota says has enhanced aerodynamics, as well as more power and an improved ability to use its added power.

One of the long-standing complaints about the 86 and its Scion FR-S predecessor has been that it felt underpowered. These changes should turn the volume down on those complaints, at least a little. For those who want a bit more power from a rear-wheel-drive coupe, Toyota will happily point shoppers at the four-cylinder Supra.

Providing the extra power in the GR 86 is a naturally aspirated 2.4-liter boxer four-cylinder making 228 horsepower, which is 23 more than the previous 86. The four-cylinder also produces 184 pounds-feet of torque, up from the previous 156. Additionally, the four-cylinder’s peak torque comes at 3,700 rpm, down from the last 86’s 6,600-rpm peak, giving the GR 86 a more linear powerband and what Toyota says should be an improved acceleration feel for drivers. The engine is likely the same (or very close to the same) power plant found under the hood of the 2022 Subaru BRZ that debuted in late 2020 — Toyota and Subaru shared development duties, though each company provides its own finishing touches to differentiate the two.

Toyota says the GR 86 was “designed by enthusiasts, for enthusiasts,” so it’s still RWD-only and available with a six-speed manual transmission. Buyers can also choose a six-speed automatic. Improved power figures lead to improved 0-60 times, with the manual’s dropping to 6.1 seconds from 7.0 and the automatic’s to 6.6 seconds from 8.0.

Those numbers still aren’t fast-fast, but Toyota has always insisted that this car has never been about pure straight-line speed. With a curb weight of just over 2,800 pounds, the GR 86 is still meant to be more of a canyon carver and autocrosser than a drag racer. Buyers who want more power will undoubtedly have a wealth of factory and aftermarket add-ons to choose from, given the popularity of the current 86 and BRZ among tuners.

To slow down the extra power, the GR 86 has 11.6-inch front and 11.4-inch rear disc brakes. The GR 86 wears 17-inch wheels wrapped in Michelin Primacy HP summer tires as standard, while Premium models get black 18-inch wheels with Michelin Pilot Sport 4 performance rubber. Regardless of wheel size, the tires are 215-width — still on the thinner end of the spectrum, but that just makes it easier to get the tail to break loose.

Complementing the added power is a redesigned exterior that takes an evolutionary approach to the coupe’s designs. New for 2022 are functional air vents in the front bumper and ahead of the wheels, along with GR badging in an upper corner of the grille.

Inside, front occupants will sit in sport seats with a deep seat cushion and tall side bolsters. An 8-inch touchscreen display with wired Apple CarPlay and Android Auto is standard.

No, not that NASA. Instead of the National Aeronautics and Space Administration, the purchase of a GR 86 comes with a free one-year membership in the National Auto Sport Association. Included in that membership is one free high-performance driving event with “expert instruction” as well as discounted admission to other NASA events.

Pricing will be available closer to the GR 86’s on-sale date sometime later this year. Expect it to be more than the last generation ($28,055 with destination), though hopefully it will still be under $30,000 to start.