It’s time for a populist muscle car uprising! Down with overpriced cars with the build quality of a Yugo! Up with entry-level muscle, with nary a Hemi, W-30, or Boss 429 to be seen. Where the next big MCACN unveiling will feature a small-block vehicle. And maybe the next issue of MCR will eschew anything above 400 hp.

Among the MCR readers who own muscle cars and other classics, statistically it’s likely most of the collective vehicles are not the top-horsepower versions. Though the upper echelon may not always be rare (LS6 Chevelles come to mind), horsepower is the name of our game. Even in these pages, you’re more likely to find a Ram Air GTO or Judge over a Goat with the standard 400. While the top engines may have fueled dreams, standard muscle fueled sales.

Why don’t we see more concours restorations (and features) on the muscular side of Detroit’s bread and butter? Perhaps because it costs about the same money to restore a car regardless of engine, and few have the means to sink a lot of money into a car that won’t hold up in the marketplace—an unfortunate economic reality.

Aren’t there other reasons to appreciate a car besides the engine with which it was born? Would you think differently about a vehicle with 327 badges instead of 396? To me, how a car is trimmed is what stands out front and center. I enjoy colors and unusual options (Bottom End, Dec. 2018; bit.ly/2PCauDF), like M46 rear-quarter scoops available for the 1970 Barracuda, or candy on non-performance models like Laser stripes on a 1971 Torino 500 SportsRoof. Any super-duper engine would be gravy.

Besides standard muscle cars, another thing I feel would be neat to see at shows and in media is for owners to restore their muscle cars with day two in mind. Sure, it’s neat to find an old relic with the original speed equipment, some of which have appeared in this magazine (“Tombstone Shadow,” Jan. 2017; bit.ly/32KpVBn). But how about building cars using old speed parts? How about starting a movement—grassroots, like all revolutions—building your own day-two muscle? Putting effort in researching old pseed parts like the folks do at Vintage Wheel Catalogs (vintagewheelcatalogs.com) could help elevate standard muscle into another price class and help elevate their worthiness for prime restorations. A fantasy based in reality? All revolutions seem unattainable in the beginning. 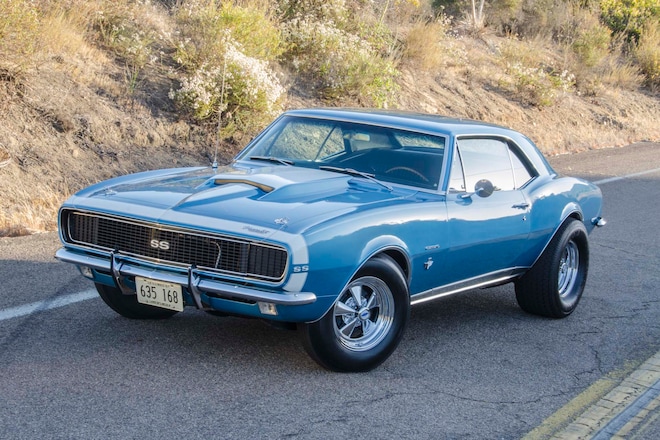 So here are some basic muscle cars that I feel would be neat to see within these pages regardless of day-two modifications. Just don’t forget the rake! I’ll include a handpicked mag wheel to get your imagination running.

1970 Pontiac GTO
No Judges here! About three-quarters of Goats were built with the standard 350hp 400 in 1970 (optional was the 455, RAIII, and RAIV). Paint it Cameo White with Cardinal Red top and slap on some Ansen Sprints. I don’t care if it looks like a bottle of Tylenol.

1965 Plymouth Satellite
Built before the GTX, the top midsize Plymouth had engines up to 426 ci and 365 hp, but let’s use the 330hp 383 to maintain the spirit of the conversation. Paint it black from top to bottom and mount Cragar Super/Stocks, and maybe you won’t mind waiting another two years for the GTX.

1971 Dodge Challenger R/T
Make mine GA4 Light Gunmetal with the V6V fluorescent orange stripes; inside, orange and black cloth would continue the flashy theme. Rather than the standard 383/300, I’ll choose a 340 with the N94 hood (the same one introduced on the 1970 Challenger T/A). The pièce de résistance would be E-T III mags.

1971 Oldsmobile 4-4-2
The standard engine was a 340hp 455, but 1971 was the first year for low compression. Revised grilles and parking lights kept things fresh, but all-new colors truly made things fresher, especially Lime Green with green stripes. New that year was the Super Stock IV wheel, a polycast mag that was only available on fullsize cars. However, Motor Wheel offered the same design as the Exiter, so this is an Olds the way Olds should have built it in the first place.

1970 Ford Torino GT
With all-new SportsRoof style and, when jacked up, a backlight that is practically horizontal, there’s a lot to like about the Torino. Color it in special-order Grabber Blue (normally a Mustang color) with nifty Laser stripes and hidden headlights, then grab a Shaker to sit atop the 300hp 351 Cleveland. To match the futuristic stripe, I’d pick Western Cyclones to make me a hit when I hit Main Street, USA.