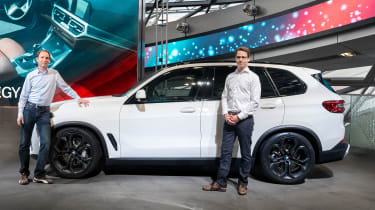 BMW has revealed a handful of new features for cars running the latest version of the brand’s iDrive infotainment software, which will eventually include the ability to make comfort and convenience features such as heated seats subscription based.

From July, all newly built BMW models running the seventh-generation version of iDrive will receive updates and new features. Owners of existing models with iDrive 7 will also receive the new features by way of an over-the-air software update.

As part of the free update, BMW plans to gradually expand its line-up of digital after-sales offers to include “certain comfort functions” such as heated seats, meaning buyers who don’t option them from purchase will be able to unlock them via app or through the infotainment system for a price.

The functions will be already built into the car, requiring owners to purchase them outright, or subscribe for a period of one to three years. However, all unlockable, built-in functions and extras will be available with a one-month trial period.

The update, which BMW says is its “most comprehensive vehicle software upgrade to date,” also includes updated navigation, a redesign for the BMW Personal Assistant, and the addition of wireless Android Auto smartphone connectivity.

Navigation now includes contextual information for nearby points of interest, such as opening hours, ratings and even preview images of destinations. The brand claims a new cloud-based route calculation system is faster and more accurate with real time traffic data than before and with easier destination input, while Connected Parking services showcase where on-street parking may be available at a destination.

Connected Charging features now include additional information about charging stations, including opening times and real-time availability. Navigation automatically takes into account available charging points for longer journeys. At home, owners can define specific charging windows when the car is plugged in, to take advantage of cheaper tariffs at certain times.

For owners of plug-in hybrid BMW models, the update introduces eZones, which uses positional data to identify when the car is in a low emission zone such as a city centre. The car will automatically default to purely-electric drive with no intervention, and BMW says it will launch in 80 European cities when the update goes live.

Also part of the update is the introduction of BMW Digital Key, which means Apple iPhone owners can use their handsets as a fully digital key for the vehicle.

Do you think subscription based options are a good idea? Let us know in the comments below…