Car insurance: 21% rise in uninsured drivers – these areas are the worst offenders

Analysis by the group, seen by Express.co.uk, has shown Lancashire has the highest rate of uninsured drivers across the country. The region has around 21 prosecutions per 1,000 people in data which is 72 percent higher than the UK national average.

West Yorkshire is the second-highest offending region with 33 per 1,000 motorists caught out with uninsured vehicles.

The national average is around 36 prosecutions for every 1,000 drivers after UK figures have soared in recent years.

According to Tempcover, the number of uninsured drivers dropped by 50 percent between 2008 and 2015.

However, this has dramatically soared over the past five years by 21 percent as motorists continue to evade the law. 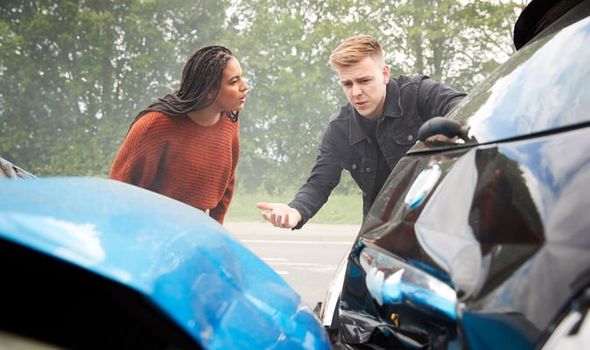 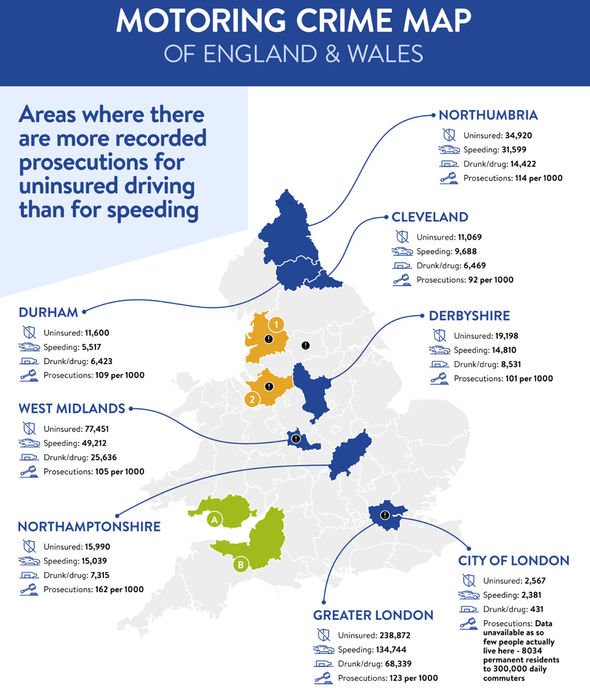 Avon and Somerset saw the fewest uninsured driving prosecutions with just 12 per 1,000 motorists caught out with charges.

He said: “While most of us would never dream of getting behind the wheel uninsured, it still seems to be a concerning problem on our roads.

“When you look at online public forums, it’s easy to find people who have considered driving without insurance because they’re bringing a new car home from the forecourt, or because they’re planning a one-off trip in a friend’s vehicle.

“Rather than driving illegally in these circumstances, the best thing to do is get temporary insurance cover that is flexible and affordable.”

Motorists in London were the fourth-highest region for uninsured drivers but recorded the most fatalities caused by those without cover.

Uninsured drivers in the capital have caused the same number of deaths over the past ten years than drink and drive offenders in a major warning to motorists.

Areas of the West Midlands were also found to be high offenders with 27 per 1,000 road users found to drive without car insurance. 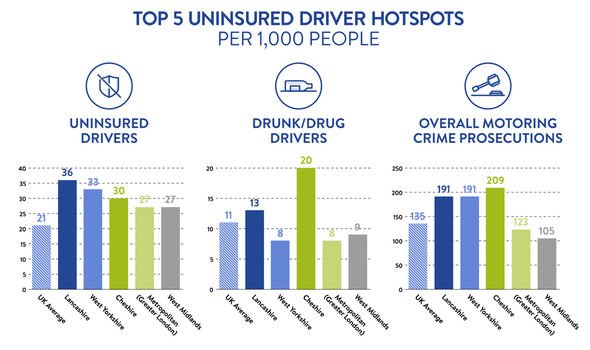 Data from the Motor Insurer’s Bureau (MIB) has revealed there are around one million uninsured drivers on UK roads.

2017 data from the MIB revealed uninsured motorists had increased by 10 percent in the first rise in a decade.

The Insurance Fraud Bureau (IFB) has announced 132,804 uninsured vehicles were seized across the UK in 2018. 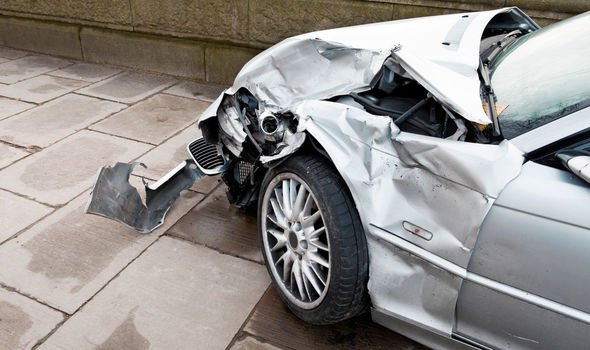 Driving without car insurance could see motorists hit with fines or penalty points with some road users even prosecuted in severe cases.

Police officers could issue a fixed £300 fine and six penalty points for driving a car without insurance.

Police can seize vehicles in some cases and dangerous offenders could receive a driving ban.

The MIB warns uninsured motorists will cause a disproportionately high level of fatalities as over 130 people are killed each year.

The MIB claims over £1.8billion is lost each year through the actions of uninsured drivers which is ultimately paid for with higher costs for law-abiding road users.

Those involved in a crash with an uninsured driver could find it hard to secure compensation for car damage or personal injuries.

Anna Fleming, Chief Operating Officer at MIB said: “Having valid Motor insurance is more than a legal requirement, it is designed to protect victims of road traffic collisions by providing them with financial compensation.

“We will continue our long-standing partnership with UK Police to ensure that everyone on the roads has insurance and to make uninsured driving socially unacceptable.”

Tesla Rolls Out Its One Millionth Car
Car Reviews