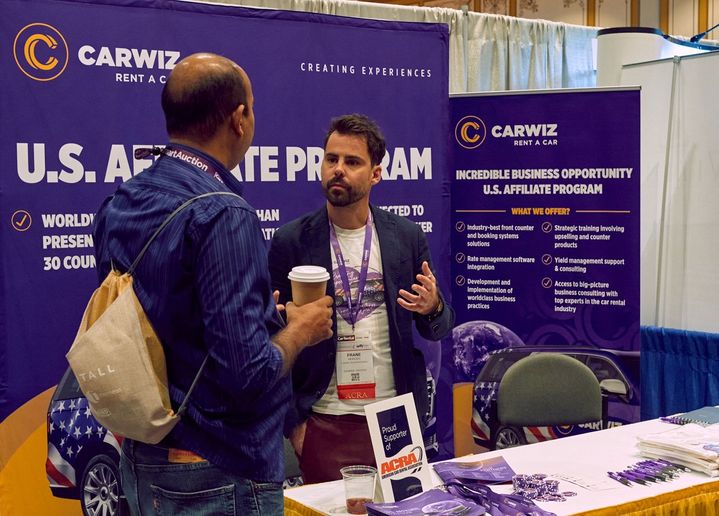 Carwiz was a sponsor and exhibitor at the 2022 ICRS, where it used the opportunity to increase awareness of its affiliate and franchise programs.

European-based car rental company Carwiz did more than mingle with peers at the recent International Car Rental Show (ICRS) in Las Vegas. It also shared the story of its brand and solutions — in particular, its affiliate program.

Carwiz announced that through interest at the show, it signed affiliate agreements with three new independent car rental companies based in San Diego, Los Angeles, and Brooklyn, New York.

The new affiliate from San Diego, SD Rental Auto Corporation, will operate in two locations: within the city of San Diego and San Diego International Airport (SAN). It has been operating for two years, with more than 100 vehicles.

In Los Angeles, Sakura Rent A Car, will operate at Los Angeles International Airport (LAX). It has been operating for 20 years with more than 250 vehicles.

And in Brooklyn, New York, Key Car Rental will operate at a Brooklyn city location, with more than 60 vehicles.

“The proven success of our Affiliate and Franchise Program — which is now available in more than 30 countries — has helped to establish Carwiz as a go-to source for the type of challenges discussed at the show,” said Frane Herceg, head of affiliate network development for Carwiz. "We were honored not only to participate in this year’s International Car Rental Show and engage with other leaders about the future of our industry, but also to meet with so many wonderful people who expressed interest in the Affiliate Program.”

Since embarking on a global expansion plan in 2019, Carwiz has raised its total number of offices to more than 150.