Home » Car Reviews » Coronavirus Car Care: We Had to Get Our Hyundai Palisade Fixed During Shelter-in-Place Coronavirus Car Care: We Had to Get Our Hyundai Palisade Fixed During Shelter-in-Place 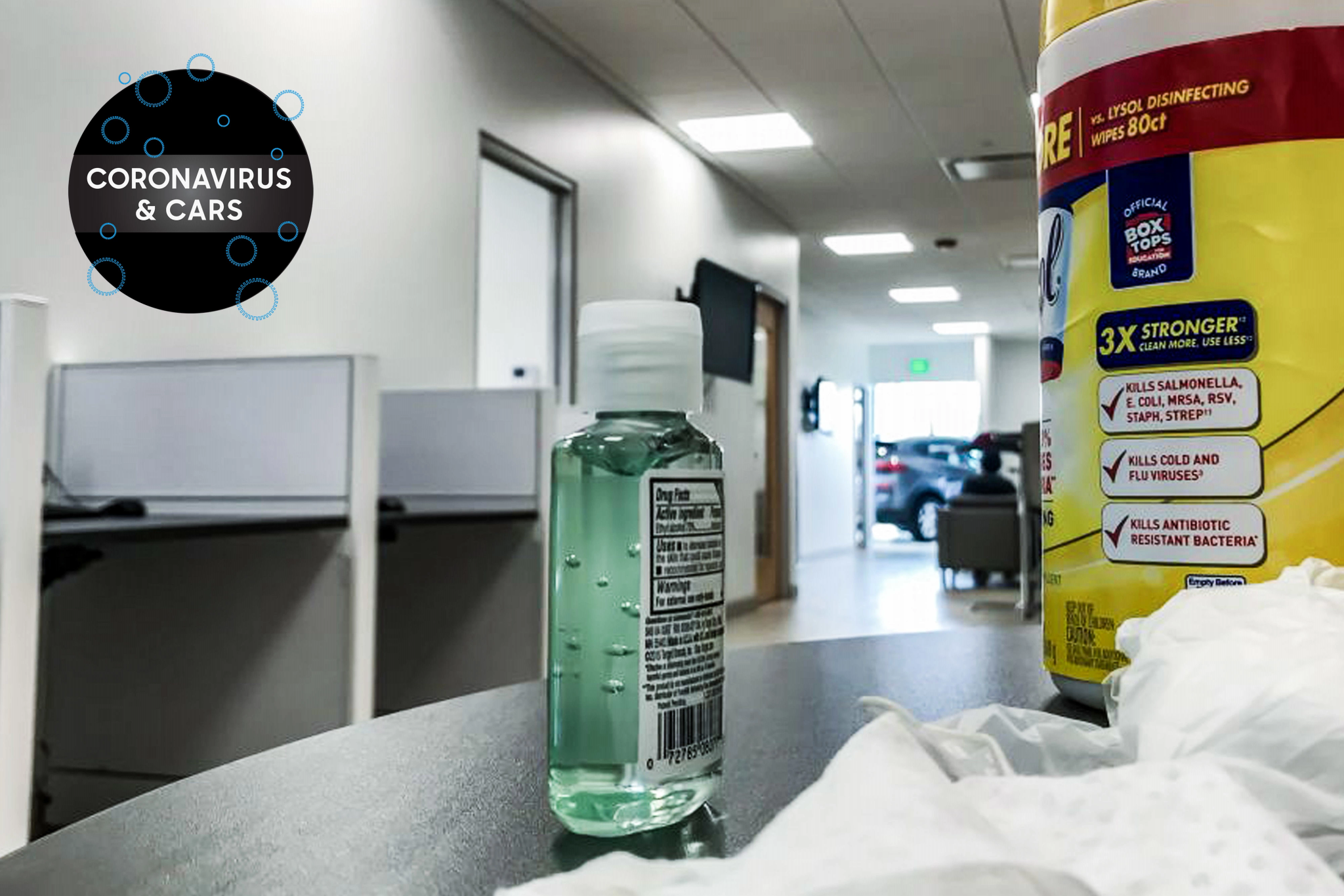 The COVID-19 coronavirus global pandemic has upended so much that once-mundane tasks are now anything but. Case in point? Car repairs. The evening of March 10, Cars.com editors found a crack forming on the passenger-side windshield of our long-term vehicle, a 2020 Hyundai Palisade. It seemed a rock had hit the glass near the base of the A-pillar, and the chip had started a crack that was spreading, at indeterminate speed, toward the middle of the windshield.

Related: Coronavirus and Cars: Can I Get My Car Fixed During a Shelter-in-Place Order?

I documented the damage, assuming we’d have to address it soon — much as we’ve done for issues large and small on Cars.com’s previous long-term vehicles. Little could I have predicted that the coming weeks would play out a recurring “Hamilton” lyric: The world turned upside down.

As the crack had become sizable, I called three windshield replacement shops on March 11. Two local businesses didn’t have an original-equipment windshield in stock for a 2020 Hyundai Palisade. The third — Safelite, is a national carrier — said it did, but the replacement would run a steep $1,689, including a mobile service that traveled out to us. Since that was well above the $1,000 insurance deductible for such damage under Cars.com’s corporate policy, we opted to file a claim. Over the following week, our insurance carrier contracted with Safelite for the mobile service; the total with sales tax came to $1,740, of which we owed $1,000. 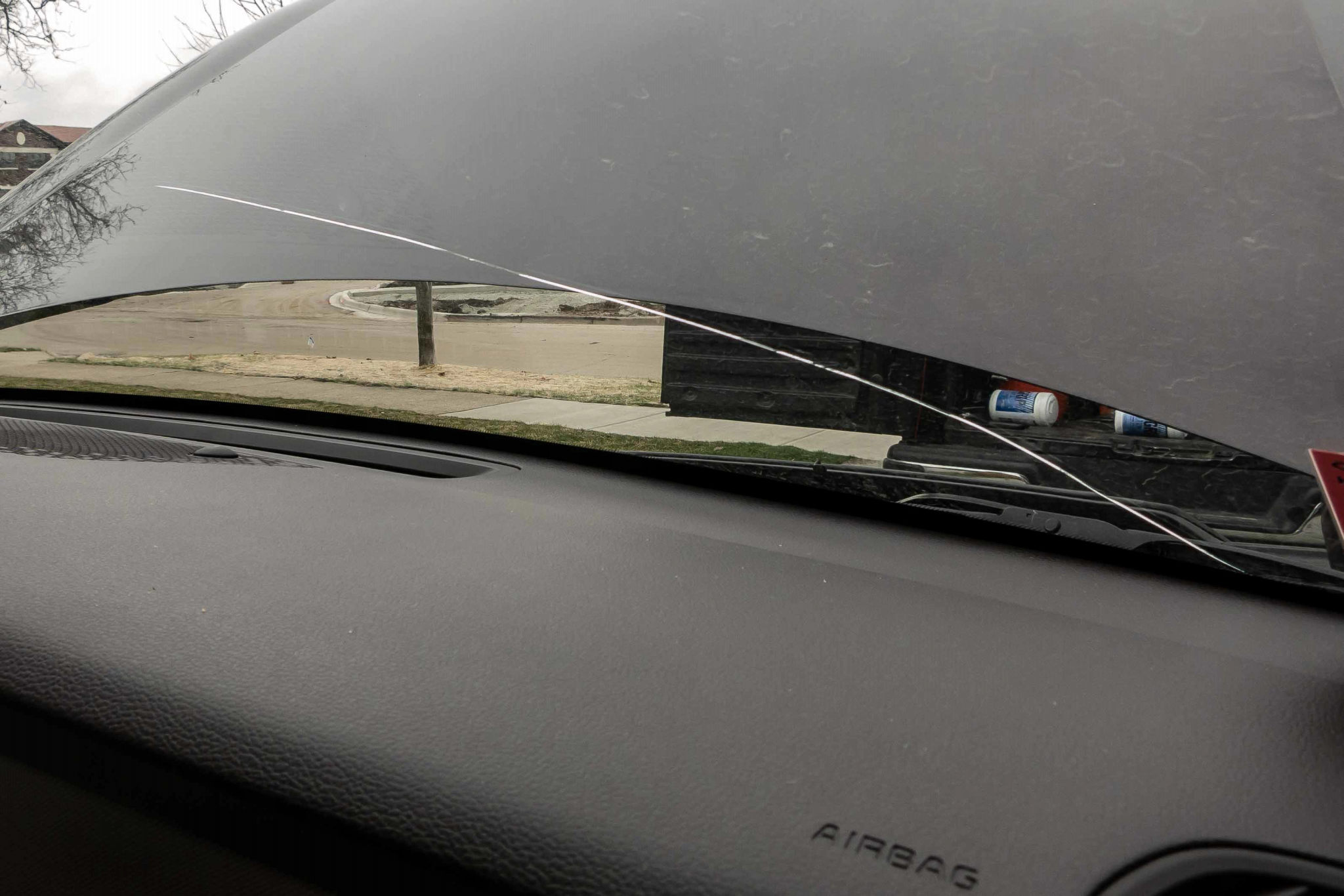 But our scheduled appointment wouldn’t come until the week of March 23, by which time COVID-19 had ballooned. In the intervening days, Cars.com had directed employees at its Chicago headquarters to work from home, followed soon by a governor’s order for Illinoisans statewide to stay at home.

Safelite remained open — unsurprising, given that federal guidance on COVID-19 business closures name automotive repair facilities among the essential businesses permitted to stay open. (Dealership sales operations are another story.) But, as Safelite notified me before the visit, technicians would not shake hands.

That’s pretty much what happened. Two technicians showed up at my suburban Chicago home, and I tossed the Palisade’s keys from a socially distanced porch. I offered some disinfecting wipes from afar, which the technicians, armed with what seemed like a good supply of gloves and sanitation products, politely refused. An hour or so later, the Palisade’s cracked windshield was gone, a new windshield in its place. Safelite’s representatives returned the Palisade’s keys, swiped a credit card to pay the deductible and left. Vigorous hand-washing and disinfection ensued. (I’m now in possession of a MasterCard you could eat off of.) 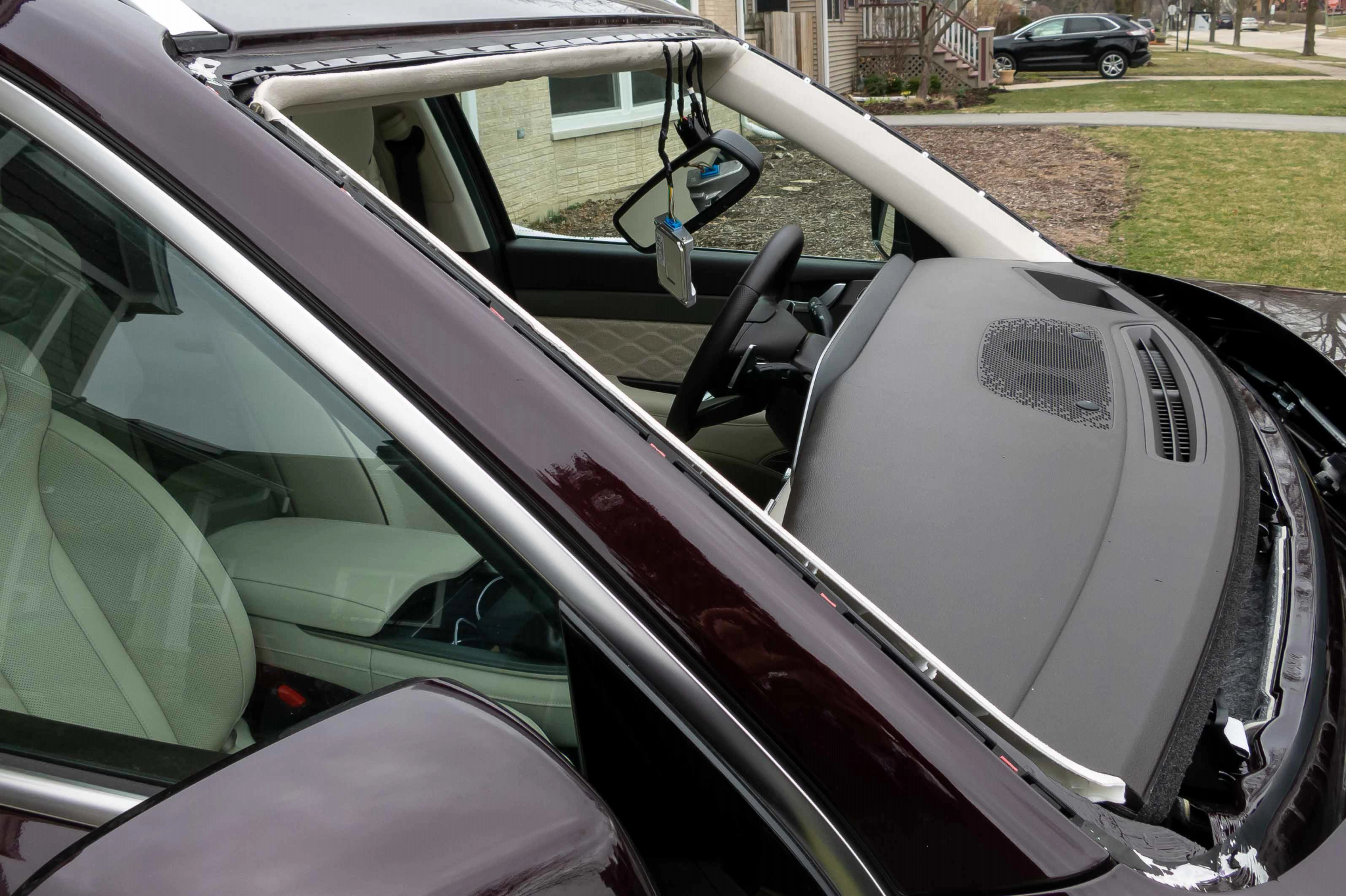 Time to Recalibrate … a Long Time

The Palisade needed just one more thing: camera recalibration. Before Safelite arrived, I received an email advising that our vehicle’s “safety system would need recalibration after windshield replacement.” Like most new cars, the Palisade employs a camera above the center rearview mirror that’s essential to some key functions. In this case, those include forward collision warning, automatic emergency braking, blind spot collision avoidance and lane centering. Indeed, the SUV’s owner’s manual recommends having the camera checked by a Hyundai dealer following any windshield replacement.

I’d called a local Hyundai dealership prior to the windshield repair, and it quoted $200 for the recalibration. Safelite forwarded instructions on how it would pay for this, given we’d already met the insurance deductible, but a back-and-forth ensued on payment authorization between Cars.com’s insurance company, Safelite and the dealership. I fielded assurances from Safelite that our deductible had been met, then reports that it hadn’t, all the while learning that if I dared pay out of pocket just to have the operation done with, reimbursement from insurance could take weeks. It chewed up the rest of the day.

Some of the hassle appears to stem from operations having been curtailed by COVID-19. A phone number listed on Safelite’s claims page for camera recalibrations sent us to a recording that directed all queries to come via email, and a representative we spoke with in a separate department said the claims line had been deactivated due to the coronavirus. An agent at our insurance company said she was working in a skeleton crew, too. Between various departments and companies, some wait times were lengthy, others minimal.

Despite all that, I might have avoided the ordeal if Safelite could recalibrate the system onsite, a service it offers except for with certain cars and regions. Alas, no such service was offered for our Palisade. I reached out to Safelite’s media relations department to see why our Palisade was excluded. The reason, it seems, involved tooling.

“We have a primary tool that covers most of the vehicles on the road,” explained Keriake Lucas, Safelite’s communications director. “And we have a supplemental tool for brand-new vehicles that requires a specialty-trained technician. As we roll out the supplemental tool, we are currently growing our technician base to handle the demand.” 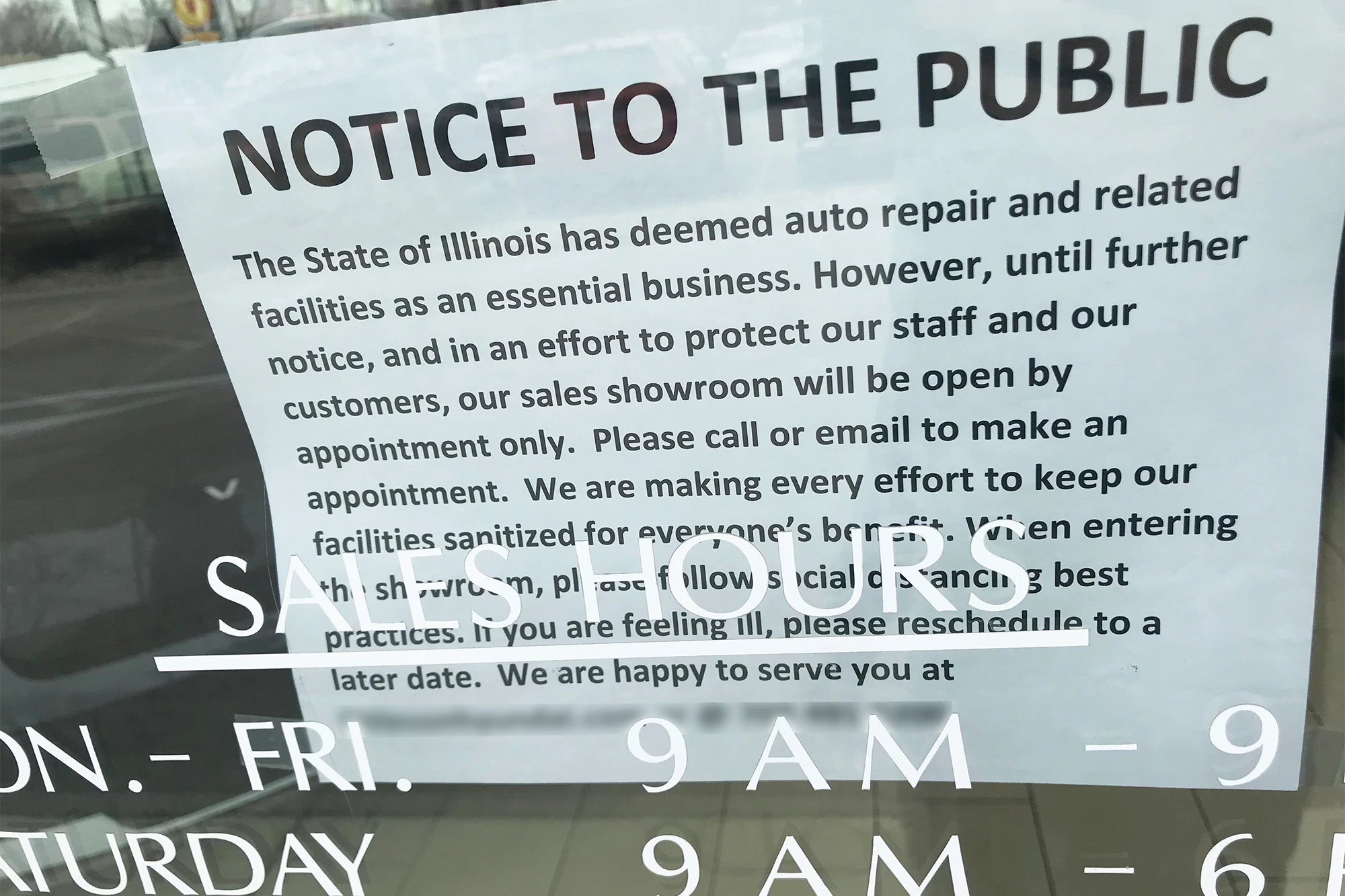 Late that afternoon, the dealership called to say payment authorization had finally materialized. I said I’d swing by the next day — Friday — and, mindful of social distancing guidelines, asked when the dealership was least busy. All times, at least these days, a service representative replied. So I scheduled an appointment for late the next morning.

Sanitizing wipes in (gloved) hand, I pulled up to the dealership the next day. The showroom was still open, albeit empty, with a sign that said the dealership was taking visits by appointment only. I handed the keys to a service advisor, signed some paperwork and went to the waiting room.

Two people sat toward one end, one wearing a facemask. I chose a distant table, disinfected the surface and chair, and set up shop with my laptop. Classic rock played in the background — Janis Joplin’s “Mercedes-Benz,” ELO’s “Evil Woman,” David Bowie’s “Space Oddity” — punctuated every once in a while by torque wrenches or background chatter. It seemed almost ordinary, at least until you noticed signage everywhere announcing that refreshments had been suspended and politely instructing customers to keep separated.

I offered a sanitizing wipe to a couple of guys walking by. Both readily accepted, and one thanked me a second time later on. The other, an apparent employee, said his three-pack had gone missing shortly after he brought it into the office.

“For here am I sitting in a tin can, far above the world,” Bowie crooned overhead. “Planet Earth is blue, and there’s nothing I can do.” It kind of felt that way.

Back to (the New) Normal

After about an hour and a half, the service adviser told me the recalibration was done, including a road test, and he’d secured payment from insurance. I disinfected the Palisade again and headed home. We’ll report on any abnormalities we notice with features like lane-centering steering, which use the camera, once the Palisade gets back into heavy driving rotation among Cars.com editors.

Munro To Tear Down A Tesla Model Y On April 1st: It’s No Prank
Car Reviews