Corvette Legends at the 2019 Muscle Car and Corvette Nationals

Chevy Collection from the Show

Over the past 11 years, the Muscle Car and Corvette Nationals has developed a reputation for gathering some of the rarest and most desirable examples of Detroit performance machines on the planet. While the majority of the cars at the show are muscle cars, show organizers haven’t forgotten the event’s roots as the Chevy VetteFest. Each year they ensure that Corvette lovers have plenty of prestigious examples of America’s sports car to lust over. 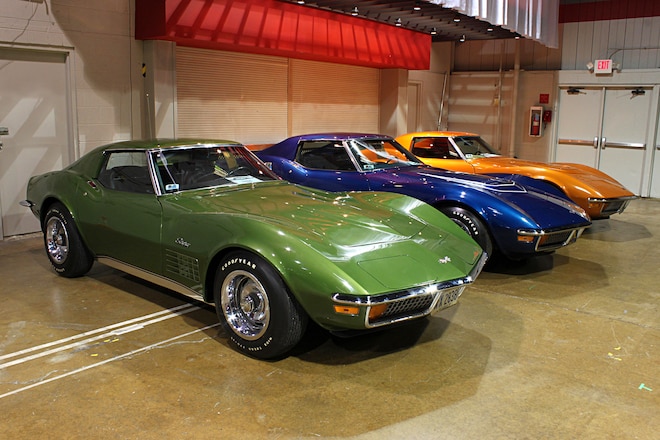 Helping to keep the quality of Corvettes high at the show is MCACN’s Triple Diamond judging, which is open only to Corvettes that have already achieved Bloomington Gold status and an NCRS Top Flight or Four- or Five-Star Bowtie award. This makes the Corvette area a bit tense on Saturday morning, as MCACN’s team of judges, led by past NCRS Illinois Region V Director and Flight Program Administrator Bill Braun, pores over each qualifying vehicle, looking for flaws in what appear to be flawless automobiles.

Since 2019 marks the 50th anniversary of a watershed year in American performance, there were numerous displays at this year’s MCACN with cars from the 1969 model year. Corvettes were a part of the celebration, as Corvette Mike’s Corvette Legends Invitational featured cars with every engine available in 1969, from the base 350 small-block to the pinnacle of Corvette performance, the ZL1. The owners of these cars were a diverse group, ranging from the original owner of a Tri-power L71 convertible to a 39-year-old who did almost all of the restoration of his 390hp 427 himself—including major repairs to the car’s birdcage.

C2s were well represented by a collection of Z06 models parked nose-to-tail with several Stinger-hooded 427s. Over in the Barn Finds and Hidden Gems area was a 1965 Corvette convertible, in storage since 1979, that was once owned by famed Corvette racer Betty Skelton. And in the Vintage Certification area for unrestored original cars was a 38,000-mile 1967 427 convertible that had been garaged from 1979 to 2017.

These descriptions just scratch the surface of the variety of Vettes displayed at MCACN. Check out our gallery for a sampling of the Corvettes that caught our eye. And if you’ve never been, consider MCACN a bucket-list show when it returns to the Chicago area November 21–22, 2020. Visit mcacn.com for more info.