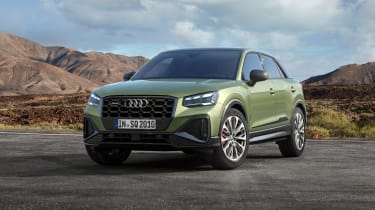 Audi has launched a facelifted version of the SQ2 – its small hot SUV rival for the likes of the BMW X2 M35i and Cupra Ateca. The revised model is available to order in the UK now, priced from £38,700, on roads early next year.

Like the standard Audi Q2, the updated SQ2 gets a new pair of LED headlights, a new radiator grille and a redesigned front bumper with broader air intakes. These tweaks are mirrored at the rear with a fresh pair of LED tail lights and a redesigned diffuser which houses the SUV’s quad-exit exhaust system.

Save for a few upholstery and trim tweaks, the SQ2’s cabin is largely unchanged over the old car’s. The most noticeable differences are technological – the old car’s optional 12.3-inch digital instrument cluster is now fitted as standard and there’s a slightly larger 8.3-inch infotainment system, which is operated via a rotary dial on the centre console.

The SQ2 is available in three trim-levels – the base-model, the SQ2 Black Edition and the flagship SQ2 Vorsprung. 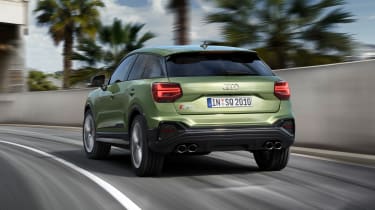 There’s also a significant bump in the level of safety technology for the flagship model – buyers get a blind spot monitoring system, rear cross-traffic assist and Audi’s adaptive cruise assist, which can assume control of the car’s throttle, braking and steering under motorway conditions, providing the driver grips the steering wheel.

The facelifted Audi SQ2 is mechanically identical to the outgoing model. It’s powered by the same turbocharged 2.0-litre four-cylinder petrol engine, which develops an identical 296bhp and 400Nm of torque. Audi says the system provides a 0–62mph time of 4.9 seconds and an electronically limited top speed of 155mph.

The engine is hitched to the same all-wheel-drive system and seven-speed dual-clutch gearbox – although Audi has fitted a slightly lighter clutch kit and a longer seventh gear, which the firm says has improved the SUV’s fuel economy. Now, it’ll return a claimed 34mpg on the WLTP combined cycle, with CO2 emissions as low as 188g/km.

Like the old model, the updated SQ2 gets lowered suspension and upgraded 340mm (front) and 310mm (rear) brakes. The quattro system can also direct the car’s torque straight to the rear axle using the car’s wheel-selective torque control, which Audi says “smoothes out the handling with tiny braking interventions at the inner wheels under reduced load.”

What do you make of the updated Audi SQ2? Let us know in the comments section below…

Classic cars increase in value by £20,000 over the last decade – you might own these gems
Car Reviews