Though the 2022 Volkswagen Taos is named after a town in New Mexico, I find myself in the middle of the desert outside of Phoenix at Volkswagen’s proving grounds. “Proving grounds” are the two words that excite me more than “free food,” but I’m not sure what it will reveal about the second compact crossover in Volkswagen’s stable.

The reason Volkswagen can fit two cars in this class is because the Tiguan is so large. Even though the Taos measures 9.3 inches shorter than the Tiguan, it still offers comparable interior size to competitors. Its styling sports more modern Atlas Cross Sport elements with the “X” bar grille and fancy taillight design, but it’s easy to confuse the Taos for the Tiguan on the road.

The Taos is already in production at Volkswagen’s plant in Puebla, Mexico, but the four vehicles that I tested were still prototypes. In fact, one of those vehicles was the one I drove last September, but with a finished interior. Two of the prototypes were all-wheel drive, the other two front-wheel drive. 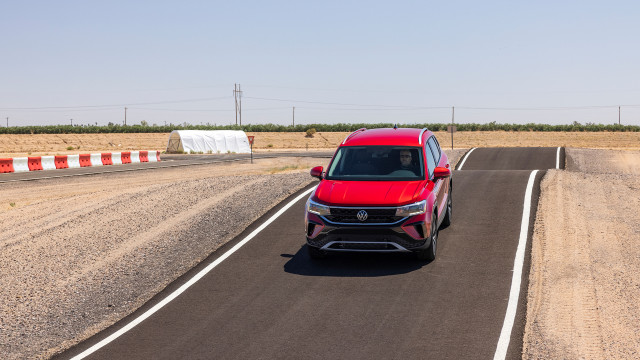 In our short road test of the Taos last fall I got a feel for the new 1.5-liter turbo-4 in the Taos, which is derived from and will eventually replace the 1.4-liter turbo-4 currently found in the Jetta. The new engine boosts output from 147 to 158 hp, though torque remains the same at 184 lb-ft. There’s also an uptick in responsiveness, it gets into its maximum torque range 35% quicker than the 1.4-liter engine and that makes the Taos feel more alive on the road than the Jetta.

It was now time to put that engine and the Taos’ chassis and suspension through some harder testing at the proving grounds. There were three distinct testing scenarios: an autocross on a tight road course, a driver training course setup with a slalom and emergency lane changes, and finally a corrosion testing track that simulated poorly maintained roads. 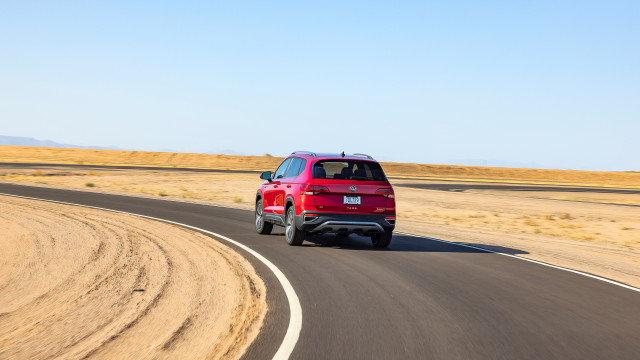 Each of the all-wheel-drive prototypes also came with different suspension struts—one firm and the other soft. Neither of these represented the production model, which Volkswagen said would end up being closer to the softer, more comfortable all-wheel-drive test vehicle. The stiffer struts were my preference, they made the Taos feel more balanced and better controlled significant body roll. But, it was also noisier than its softer counterpart over broken sections of road and struggled to isolate the cabin (and my back) from the jostling. While a part of me wishes that the stiffer model had won the day, I’m practical enough to recognize that for the majority of buyers, the softer suspension that’s quieter and more pliant over imperfect roads makes more sense. 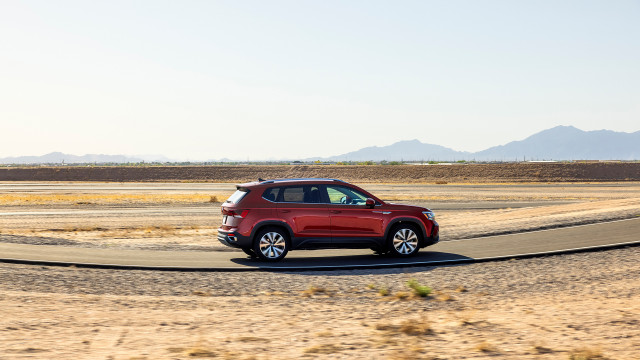 The front-wheel-drive prototypes did offer one advantage, they provided more off-the-line burst and the 8-speed transmission did a better job holding gears. The dual-clutch transmission seemed to have a touch of hesitation when floored from a stop and it kept kicking me out of second gear on the slalom and slowing my momentum—problems I didn’t have with the front-wheel-drive prototypes.

These tests revealed a Taos that is a good handling vehicle (for a large small crossover), with solid ride characteristics as well. The transmissions both seem to want to upshift frequently to run more efficiently, so be prepared to take over the shifting via the gear selector or using the “S” mode for more spirited driving. I was also disappointed the front-wheel-drive models won’t offer Volkswagen’s customizable drive modes that allow you to dial up the steering weight as it feels overboosted in its regular setting, while keeping the engine operating at a comfortable setting.

Volkswagen did offer one more piece of good news as well: the 1.5-liter will be more fuel efficient. That seems to be counterintuitive; increasing power and displacement usually worsens fuel economy, but Volkswagen promises the Taos will have best-in-class fuel economy (the compact SUV class that is), which the EPA will confirm this week. 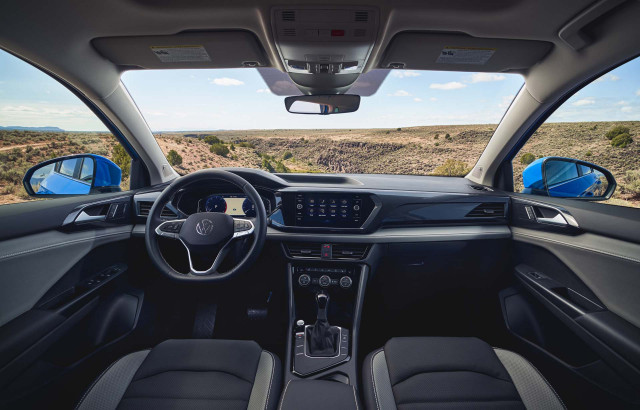 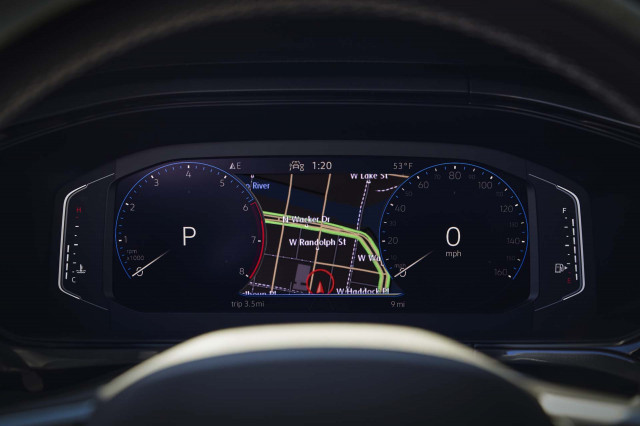 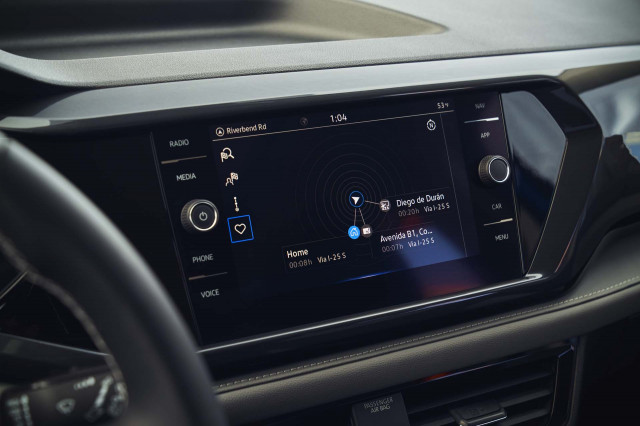 Inside, the Taos’ higher trim levels get a big advantage on technology features. The optional 8.0-inch touchscreen features Volkswagen’s latest MIB3 multimedia system with wireless Android Auto and Apple CarPlay, which is not offered with the standard 6.5-inch touchscreen. And though a digital gauge cluster is standard, you’ll only get the fully customizable version on the top SEL trim level, Volkswagen confirmed.

The Taos is roomy inside, especially for rear seat passengers. Even though it’s so much shorter than the Tiguan it actually has more rear leg room (37.9 inches) than a Tiguan with a third row. That spaciousness is enhanced by a large panoramic sunroof that extends way back over the second row. In some ways the Taos makes the Tiguan feel too big; it will be interesting to see if the Taos cuts into the Tiguan’s sales since it will certainly be cheaper and has enough room even for small families.

The base Taos will probably not be the one to get; the mid-grade SE will come with the larger screen and likely more standard safety technology such as automatic emergency braking, adaptive cruise control, and active lane control. If that trim level costs as much as a base Tiguan, it’s the vehicle I’d choose between the two.

We’ll have more details on the Taos as we get closer to its on sale date this summer, but after a second go-round the compact SUVs remains a promising entrant into a crowded field.

Volkswagen provided access to its proving grounds outside of Phoenix, a hotel room, a delightful carne asada quesadilla, and four Taos prototypes for The Car Connection to bring you this firsthand drive report.