Spring has once again descended upon the UK to bring a new season to Forza Horizon 4. We’ve entered the final lap for Series 32, with the last batch of content now available to players.

One of the most powerful Ford Mustangs ever conceived makes a long awaited return to the festival this week, along with more Playlist prizes for 50% and 80% completion. 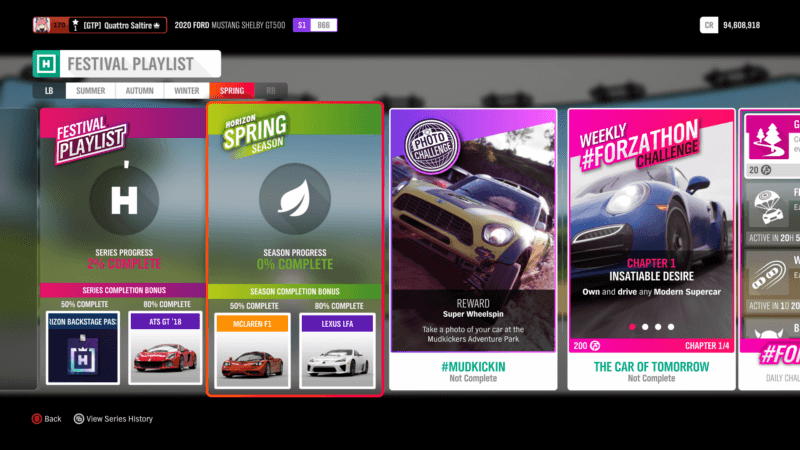 Supercars are the order of the day for the Playlist prizes, with the legendary McLaren F1 taking center stage.

Built with zero compromise, the F1 is arguably one of the most iconic supercars of all time. Featuring a racing-inspired central driving position, the F1 held the record for the fastest production road car from 1998 until 2005. To achieve that 240mph top speed, the F1 featured a BMW-sourced 6.1-liter V12 making 627hp. With rear-wheel-drive and a manual transmission, the F1 remains as one of the most driver-focused supercars ever made.

On the more modern end sits the Lexus LFA. Following a ten-year gestation period, the LFA is one of the most exciting exotics to come from Japan. Bristling with cutting edge construction, Lexus fitted the carbon-bodied LFA with a 4.8-liter V10 making 552hp, and had to produce a digital rev counter in order to keep up with the fast revving nature of the engine.

Concluding the Photo Challenges for Series 32 requires you to get down and dirty. #Mudkickin asks you to snap a picture of any car you have at the Mudkickers Adventure Park. In terms of seasonal championships, prizes include the Nissan Pulsar GTI-R and an Aston Martin Vanquish Zagato.

Making its presence loudly known is this week’s main prize: the 2012 Ford Mustang Shelby 1000. Last seen in the first Forza Horizon, the Shelby 1000 is one of the most insane pony cars ever built. Extensive modifications mean that the 5.4-liter supercharged V8 produces 1,000hp. There have also been modifications to the suspension to ensure the Shelby is more than just a drag strip monster. Unlike the 2020 Shelby GT500, this snake was built in very limited numbers.

To get the Mustang, you’ll have to win the “Shelby Coming Round The Mountain” championship.

If you’re in the mood for a Showcase Remix, there’s the return of a classic event. “Supersonic vs Superfast” will see you strap into a Ferrari 812 Superfast in a race from Broadway to the Festival. Your opponent is a formidable Deltawing aircraft. 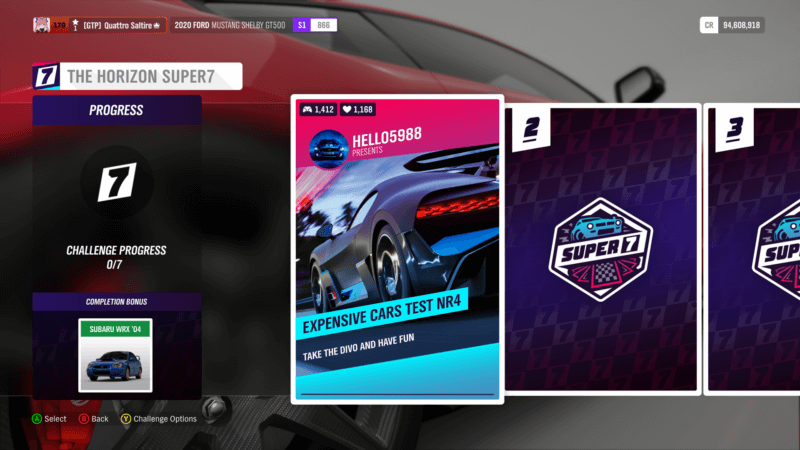 New Super7 challenges are also available for Spring. If you complete all seven cards, you’ll recieve a 2004 Subaru Impreza WRX STI as the completion prize.

Read on below for the Spring events:

Shelby Coming Round The Mountain 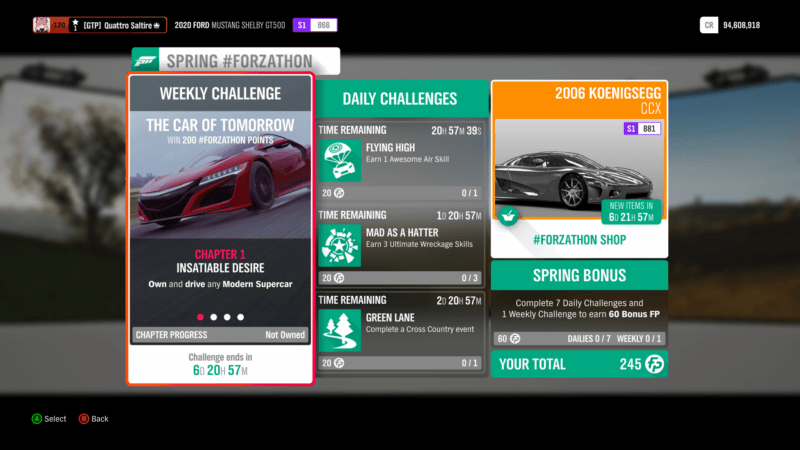 Speed, style and technology all make up the stars of Forzathon this week: Modern Supercars. Grab any of these missiles to get started.

Next up, its time to prowl the streets and race to victory in three Street Scene events. Afterwards, put your handling skills to the test as you’ll need to earn a total of 15 stars from Speed Zones.

Finally, put the pedal to the floor and earn 20 Awesome Speed skills to bring down the curtain for the latest challenges. 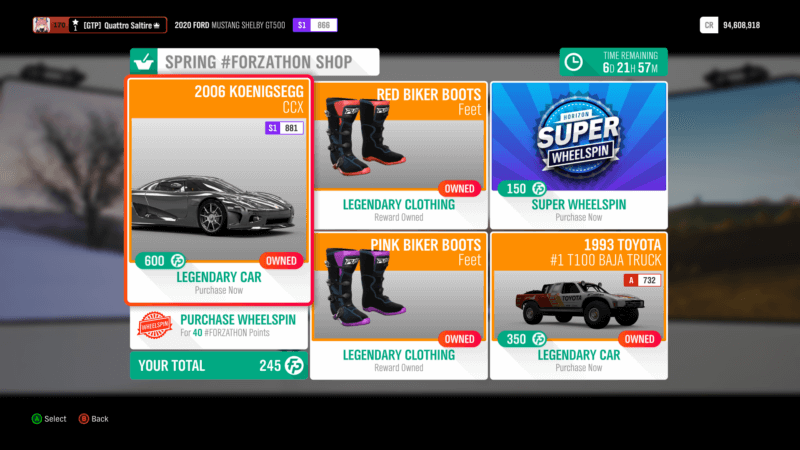 Leading the shop lineup for this week is the 2006 Koenigsegg CCX. Eager to remain at the top of the hypercar pecking order, the CCX makes subtle refinements over its CCR predecessor. Under the hood lies the same insanity expected from Koenigsegg, as an in-house built 4.7-liter twin-supercharged V8 replaces the Ford unit that powered the CC8S and CCR. With 806hp going through the rear wheels, the CCX demands total commitment and respect when you unleash all that power.

Coming in at 600 Forzathon Points, the CCX may seem expensive, but you’ll be getting one of the wildest hypercars, capable of embarassing the established order, in return.

If you want something more extreme, there’s the 1993 Toyota T100 Baja Truck. Built with the express purpose of tackling the infamous Baja 1000, the T100 is designed to conquer unforgiving territory at great speed. Unlike other Baja trucks, the T100 doesn’t come with a thumping V8, but instead has a 3.4-liter V6 making 360hp. Despite this, the T100 will not let anything get in its way.

At 350 FP, the T100 is reasonably cheap way of getting an extreme offroad racer and is one of the lesser known trophy trucks around.

Clothing items available include the Red and Pink Biker Boots.