Home » Car Reviews » Greeting from the Grave: The Many Shades of Mopars Greeting from the Grave: The Many Shades of Mopars

Greetings, boys and ghouls, and happy Easter from the Graveyard. Of course, by the time you read this article, Easter will have passed, but I wanted you to know I wrote this month’s editorial in my office on Easter. I know that Easter is a special day for many people, myself included. For me, this year, it reminds me of my mom. It was a year ago today that we were fighting to keep her going, fighting to get her to fight, but she was tired. We lost her this week, a year ago. While my world will never be the same, my heart always will be.

Ruby Jean Worman taught me how to survive and how to fight. How to stand up for someone who couldn’t stand up for themselves. She taught me generosity, compassion, empathy, and how to appreciate the gifts in our lives. Everything good and decent in me is because of her. She raised me in faith and to believe that we are our brother’s keeper. I live my life by this simple scripture and she did, too—and, yes, I realize that biblically speaking, this was Cain flippantly telling God that he wasn’t his brother’s keeper to cover the fact that he had murdered him, but in this case, we infer the opposite of anything Cain subscribes to—but I digress. I have fought many battles in my life with her by my side, some I’ve won, some I’ve lost, but I’ve always tried to do what was right. I have many more good battles ahead, I am sure, but now I will face them without her loving heart and open ear to share with, but I know in my heart she’s watching over me. She was the rainbow that gave me light in the sterility of darkness, and I miss her terribly. So I dedicate this month’s article to my mom and to all of the mothers everywhere who have blessed their children with the tools to stand up, to fight, and always do what is right. 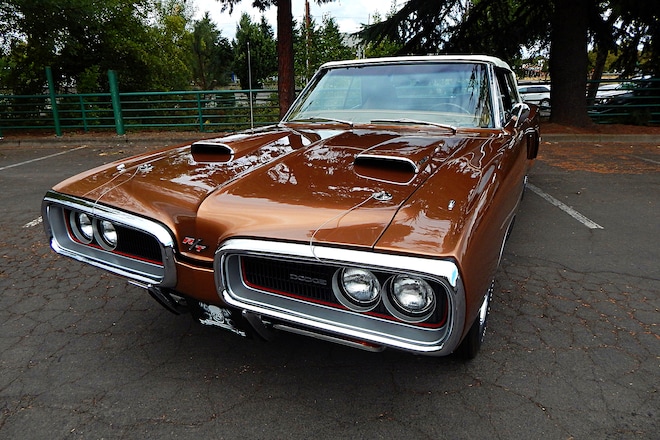 Because of the significance of this article and my love of all things Mopar, I couldn’t imagine a better topic than the very thing that drew me to the Pentastar as a young boy. Have no illusions, over the years I have developed many appreciations for our favorite cars. I mean, it’s hard to argue with a 426 Hemi—aka “Elephant”—or a high-performance 440 topped off with three Holley two-barrel carbs. How about a shifter that looks like it’s ready for a sundown showdown in Dodge City, Kansas. Moreover, how about a manufacturer that decided, due to the unprecedented horsepower being produced, that they should install a brutal 3/4-ton truck rear end (aka Dana 60) to absorb the punishment? Rallye instruments, 8-tracks, and cassettes—Ramchargers, air grabbers, and shakers, oh my! Yes, agreed, these are all pretty audacious and awe-inspiring features, but nothing in comparison to the rainbow of colors that adorned the very cars themselves.

If you take a bird’s-eye view of the Graveyard here at the shop or just peek inside the assembly room, you will see what I mean. Inside, we have a 1971 ’Cuda 340 three-speed convertible, sporting its factory color: FC7 In-Violet. Across the aisle is a 1970 ’Cuda 440 six-barrel, four-speed hardtop, wearing her original cosmetic shade: FE5 Rallye Red. Back across the aisle of the assembly shop, you will see our famous 2016 SEMA ’Cuda with a Mopar Performance 392 Hemi, a Silver Sport six-speed transmission, and of course, a Moser reproduction Dana 60. Wrapped around it lovingly—as if to say, “Here I am, how could you miss me?”—is the beautiful, high-impact FJ6 Sassy Grass Green.

Now, not to bore you, but there are three more cars you see in the assembly shop as you head toward the office. A 1970 Challenger R/T, 440 Six Pack, four-speed, sporting her factory color code choice of EB7 Medium Blue Metallic. If it were a ’Cuda in the same paint code, the color would be called Jamaica Blue. Our penultimate car is a 1969 GTX, painted in EB5 Blue Fire Metallic. And last, but most certainly far from least, is our 1972 Plymouth Duster in GY9 Tawny Gold. So, as you can see, Mick and Keith may have been foretelling the future as much as writing a song for their new album. Oh, and yes, I was alive when that song came out. In fact, I was 5 years old and probably already eyeballing a model car at Bi-Mart that I could procure through some serious good behavior. 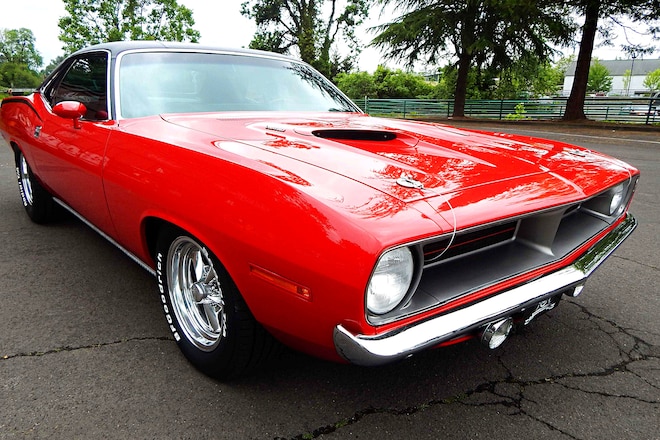 What do you say we take a walk on the wild side? No, not that wild side, the wild side of courageous colors, alluring accents, sensational shades, and chromaticity that possesses all of the wonder and mystique of the northern lights blanketing the skies over the Mojave desert, in August, oh my (excerpt from work-in-progress memoirs, “Objects In The Mirror”)—wait, are the northern lights even visible that far south? I may need to edit that chapter.

One look at the west side of the Graveyard, and it’s apparent: Mother Mopar really grew up in the ’70s! They say if you remember the ’60s and ’70s, you weren’t there—some veiled reference to the ’60s and ’70s culture, I suppose. I wouldn’t know, I did not partake of the party favors, my mother raised me better than that. However, feel free to ask my best friend, Royal, about his culturally relevant experience. As for me and the rest of the car-speaking planet, we remember the ’70s very clearly: Winchester Gray (EA4), Evening Blue (EB7), Midnight Blue (B9), Mood Indigo (GC8), Rallye Red (FE5), Amber Sherwood (GF3), Avocado Metallic (GF9), Burnt Orange (FK5), Aztec Gold (FL6), Seafoam Turquoise (Q5), Tahitian Walnut (GT8), and so on and so on and… 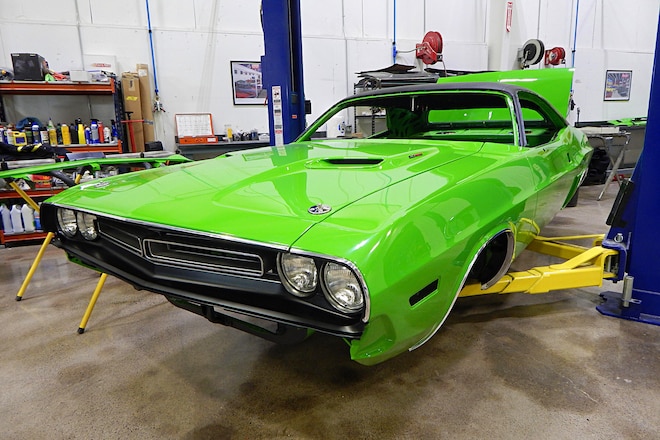 Now, remember this, 1970 was the first year of Mopar’s “High Impact” colors. The incomplete list of colors mentioned above does not include the highly coveted and most sought-after colors in the history of automotive rainbows. Such daring hues as: FC7 Plum Crazy, F6 Rally Green (1969 color only), FJ5 Limelight, FJ6 Sassy Grass, EL5 Bahama Yellow, FM3 Moulin Rouge (one of the rarest colors ever produced on any car, anywhere), EV2 Tor Red, FY1 Lemon Twist, GY3 Curious Yellow, and who could forget the special paint code 999 Richard “The King” Petty Blue? All of these “High Impact” colors, not only make an originally coded car very special, but they also make a great conversation piece next time your Bow Tie Buddies or Blue Oval Brothers are hanging around. But, in all likelihood, they will just have to listen, because really, unless they’re quoting Vinny Bag O’ Donuts about a “Metallic Mint Green ’64 Buick Skylark,” they don’t have much to talk about.

In my heart lies a rainbow. She is always beautiful to me, even in darkness. Her reflections of light are the colors of my heart and the prepossessing path of my travels. I don’t look for the pot of gold at the end of the rainbow anymore, because I know now that the real treasures are in my heart.

“Have you seen her all in gold, like a queen in days of old, she shoots colors all around, like a sunset going down, have you seen a lady fairer?” —The Rolling Stones

Here's how the 2020 BMW M8 stacks up against its predecessor