The pace is quickening in the newest set of GT Sport Time Trials, available today and running over the next two weeks. Both events use racing machinery, and both come from the upper echelons of motorsport — both real and virtual.

For this fortnight’s tuner challenge, you’ll be heading to the Autopolis circuit in Japan. This circuit was originally created with the intent to host F1 but ultimately it never came to pass — thankfully, as it’d be a pretty scary track to drive at F1 pace.

However, it does host top-level Japanese motorsport, including Super Formula and Super GT. It’s the latter of those that you’ll be emulating in this time trial, taking your choice of GT Sport‘s six Gr.2 race cars out for a hot lap. This category features three Super GT cars each from Honda, Lexus, and Nissan, for each of two eras: 2008 and 2016.

It’s pretty likely you’ll want one of the newer trio for this challenge, but with free rein on tuning you have some scope for setting the cars up to tackle the off-camber bends at Autopolis.

The fixed-setting event is a good deal quicker though. You’ll be behind the wheel of the Red Bull X2019 Competition, the car used in the final races of Nations Cup World Tour races — including the World Final itself. It’s a tweaked version of the original Adrian Newey-designed Red Bull X1, with altered aerodynamics to improve close racing battles and a naturally aspirated V12.

For this challenge you’ll take the X2019 to one of the fastest race circuits in the world: Circuit de la Sarthe. The long straights should see you hitting top speed in the X-car with ease.

GT Sport‘s Time Trial mode is a global competition, ranking your best time against all players worldwide, rather than just those in your region as with other Sport Mode events. These two time trials will run through to December 17, when two further events will replace them. 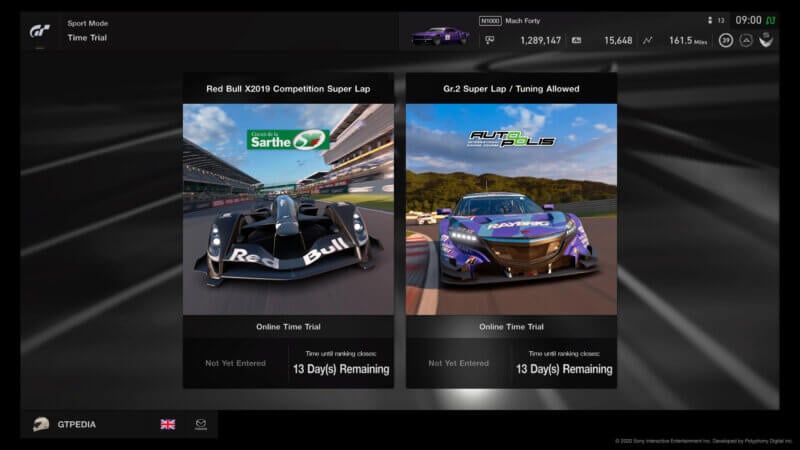