There’s no doubt that Dodge changed the horsepower game with the introduction of its 707hp Hellcat Hemi. What made things interesting is that these engines were available in both Challenger and four-door Chargers, giving a whole new meaning to the term “four-doors of fury.” For some people, 707 hp still didn’t do the trick, and a whole aftermarket sprung up that helped modify these cars.

Perhaps the meanest Hellcat Charger we’ve ever seen (and that’s saying something) belongs to Duane Roots of Oakdale, California. The 2015 Charger makes an estimated 1,500 flywheel horsepower on nitrous, or more than twice that of stock. It’s been more than 150 mph in the quarter-mile, but Duane didn’t stop there; he’s gone 189 mph in the half-mile, broken the 200-mph barrier with 215.8 mph in the standing mile, and split the air at a crazy 231.6 mph in the now-defunct 1.5-mile Mojave Magnum. 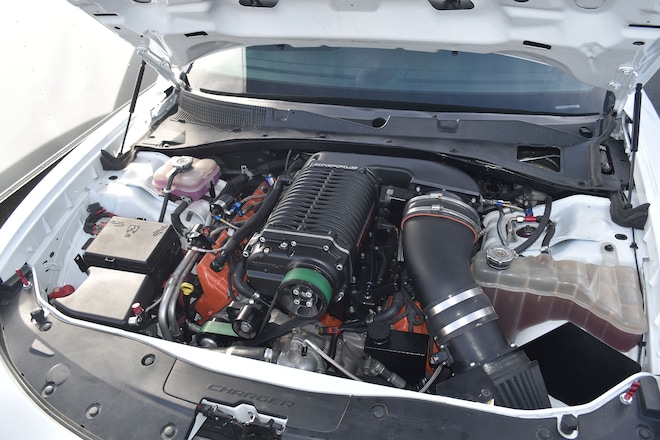 “This has been a whole new experience for me,” Duane says. “I’ve always wanted to build something different, but this was the first time I actually made it happen. I’ve gotten help from all over the country with my build. The engine parts were from Virginia, my tuner is from Pennsylvania, and we assembled everything here in California.” Duane indicated that he’s more than happy with the top speed, but his next big task will be to get down the quarter. “Once we get the shifting down, this Hellcat is really going to fly,” Duane states. We don’t doubt him one bit.

Beefy Long-Block
Duane hasn’t had an easy road building his Charger. He grenaded the first Hemi with a little too much “everything,” so he commissioned Arrington Performance (now in Brighton, Michigan) to build a 6.2L Hemi with all the best parts. The short-block was filled with a Molnar 4340 crank, Manley H-beam rods, and forged 9.5:1 Diamond pistons that would be compatible with boost. Surprisingly, the stock camshaft was retained, as were the factory cylinder heads, although they were heavily ported. The engine was assembled at Performance Dyno Tuning in Oakdale, California. Serious Fuel System
To make the horsepower he wanted, Duane decided to make the switch to E90-based Ignite 114-octane racing fuel, which he needed a big-time fuel system for the ethanol switch. The solution came in the form of a Fore Innovations Hellcat Triple Pump fuel system that included all the needed oversize fittings, lines, and filters. The injectors were also upsized to high-flowing 1,800cc units from Injector Dynamics.

Blower & Nitrous
Duane didn’t hold back when it came to aspiration, as he went straight to the bottom of the page and ordered a 4.5L blower from Whipple. Compared to the factory 2.4L blower, that’s 88 percent more airflow, and it’s barely loafing along at 18 psi. “Since we were running half-mile and mile events, we first put nitrous on the engine to control inlet temperatures,” Duane says. “The engine responded well, so we put more on!” Duane figures he’s at around an extra 150 hp with the Nitrous Outlet system activated, as opposed to just blower alone. Additional engine intercooling is handled by an air-to-water intercooler and rear-mounted ice tank with twin pumps and 3/4-inch lines. Drivetrain-Demolishing Weight
“Getting a 4,200-pound car to launch and shift and not break parts has been incredibly challenging,” Duane says. He’s been through multiple transmissions before settling on a beefed-up unit from Paramount Performance Products in South Carolina. After five driveshafts, The Driveshaft Shop built him a custom ultrathick carbon-fiber piece with twin CV joints. Hellcats are known for rear differential issues on sticky tracks, so Duane stepped up and installed a custom 9-inch-based IRS setup from GForce Engineering that also lowered the rear of the car 3 inches to keep it stable at speeds. Duane said he’d definitely like to thank his main pit guy, Bobby Weeks, friends and family, and OST Dyno for helping him build a truly unique car. Does your four-door go 231 mph? We didn’t think so!