The range-topping Jaguar F-Pace SVR gets a host of upgrades, including chassis tweaks and a torque boost 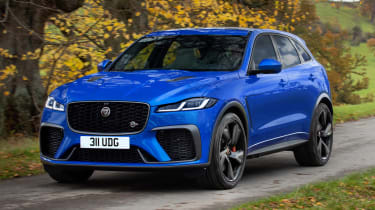 Hot on the heels of the revised F-Pace, Jaguar’s Special Vehicle Operations division has updated the range-topping SVR version. The Porsche Macan Turbo rival is available now, priced from £77,595.

The changes are subtle but extensive and cover a range of areas, including the SVR’s styling, aerodynamic efficiency, engine, drivetrain, chassis and in-car tech.

From the outside, the new F-Pace SVR can be identified by a new front bumper with larger, more squared-off air intakes than before. The front splitter is also wider and flatter, and Jaguar says these changes contribute to a 35 per cent reduction in aerodynamic lift.

Beneath the SVR’s vented bonnet sits a revised version of the existing car’s 5.0-litre supercharged V8 engine. While its power remains the same, at 542bhp, a few tweaks to the software have liberated an extra 20Nm of torque for a new 700Nm peak. The updated SVR’s eight-speed automatic has been lifted from the Project 8 super-saloon. 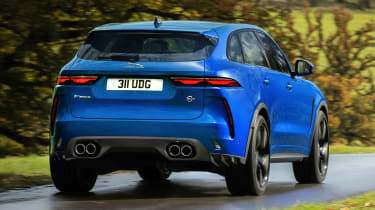 A series of tweaks to the mechanical and electrical sides of the SVR’s chassis aim to improve the driving experience. Retuned adaptive dampers and new suspension bushes are said to deliver a smoother low-speed ride, while there’s more difference between the damping and steering response in Comfort and Dynamic modes; in other words, Comfort is more relaxing, while Dynamic is firmer than before.

Inside, this SVR edition benefits from the same updates as the standard F-Pace, including a redesigned dashboard and new heating controls. The cabin is trimmed in a mix of leather and Alcantara, both of which are found on the SVR’s figure-hugging front sports seats. Trim inserts are aluminium as standard, with carbon-fibre trim optional.

Jaguar’s latest 11.4-inch Pivi Pro infotainment system has also been fitted. This is bigger and brighter than before, has simplified menus, and gets Apple CarPlay and Android Auto as standard.

Do you like the look of the updated Jaguar F-Pace SVR? Let us know in the comments section…