Hyundai has yet to show a version of the Ioniq 5 that comes close to the performance of the Kia EV6 GT. One is in the works, though, and our spies snapped it while testing and even though it’s hidden by camouflage, we are still able to observe some of the differences it will feature over lesser models.

The model will most likely come to be known as the Ioniq 5 N (although the name has yet to be confirmed), and if you know other models from the manufacturer that wear this letter, then you know they can be quite extreme. With that in mind, it looks like this prototype has bigger brakes, and a bigger width difference between the front and rear tires – all Ioniq 5s and Kia EV6s have staggered wheels, but it looks like for the N, the rear wheels will be even wider.

The wheels are also bigger in diameter and shod in what look like sporty, low-profile tires and the ride height is also lower. It also looks like the rear wheels get extra plastic flares that no other current version of the model gets – their presence there further strengthens our belief that the Ioniq 5 N will have considerably wider rear tires. 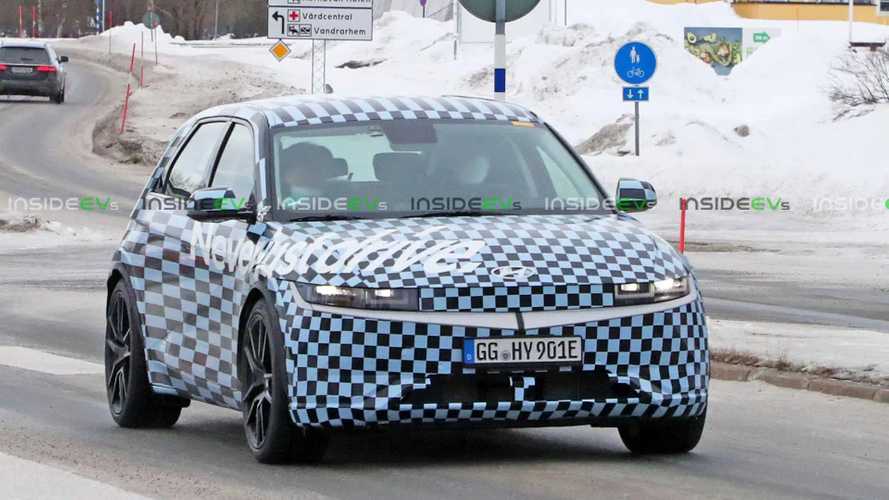 Probably the biggest giveaway that this is a sporty model, though, has to be the camouflage chosen by Hyundai. It looks very obviously like a checkered flag, hinting at the fact that this vehicle was designed with some track driving in mind – Hyundai also chose to have ‘Never Just Drive’ written across the front right fender and hood, hinting at its sporting credentials.

Sportier front and rear bumpers may also be hiding under the camouflage, but we can’t quite tell right now. Regarding its performance, all we have to go on right now are the numbers announced for the EV6 GT, which makes 576 horsepower, although the platform does allow for up to 600 horsepower, so we’ll have to wait and see if the Hyundai is any more powerful than the Kia.

Fuel prices almost £2.20 per litre at London petrol station – over £10 for four litres