Many traditional automakers have announced ambitious electrification targets for the year 2025. The VW Group aims to become the global EV market leader by 2025 at the latest, Hyundai plans to sell 560,000 EVs per year by 2025, and Ford targets an increase of its investments in electrification to $30 billion through 2025.

These are not the only companies that pledged to put a lot of money in EVs, so it will be interesting to see which brand will win the race to dominate the EV market.

Well, judging by data from 37 automakers analyzed by Scottish auto retailer Peter Vardy, Hyundai looks set to have the most EVs by 2025. According to the Korean brand’s official targets, it will add 20 models to the range by 2025 for a total of 23 EVs—including the already available Kona Electric, Ioniq Electric, and Ioniq 5.

If it sticks to its word, this will be a huge accomplishment for Hyundai. Make no mistake, this only applies to the Hyundai brand; if the Kia sister marque is also taken into account, the Hyundai Motor Group would offer a total of 37 EVs. 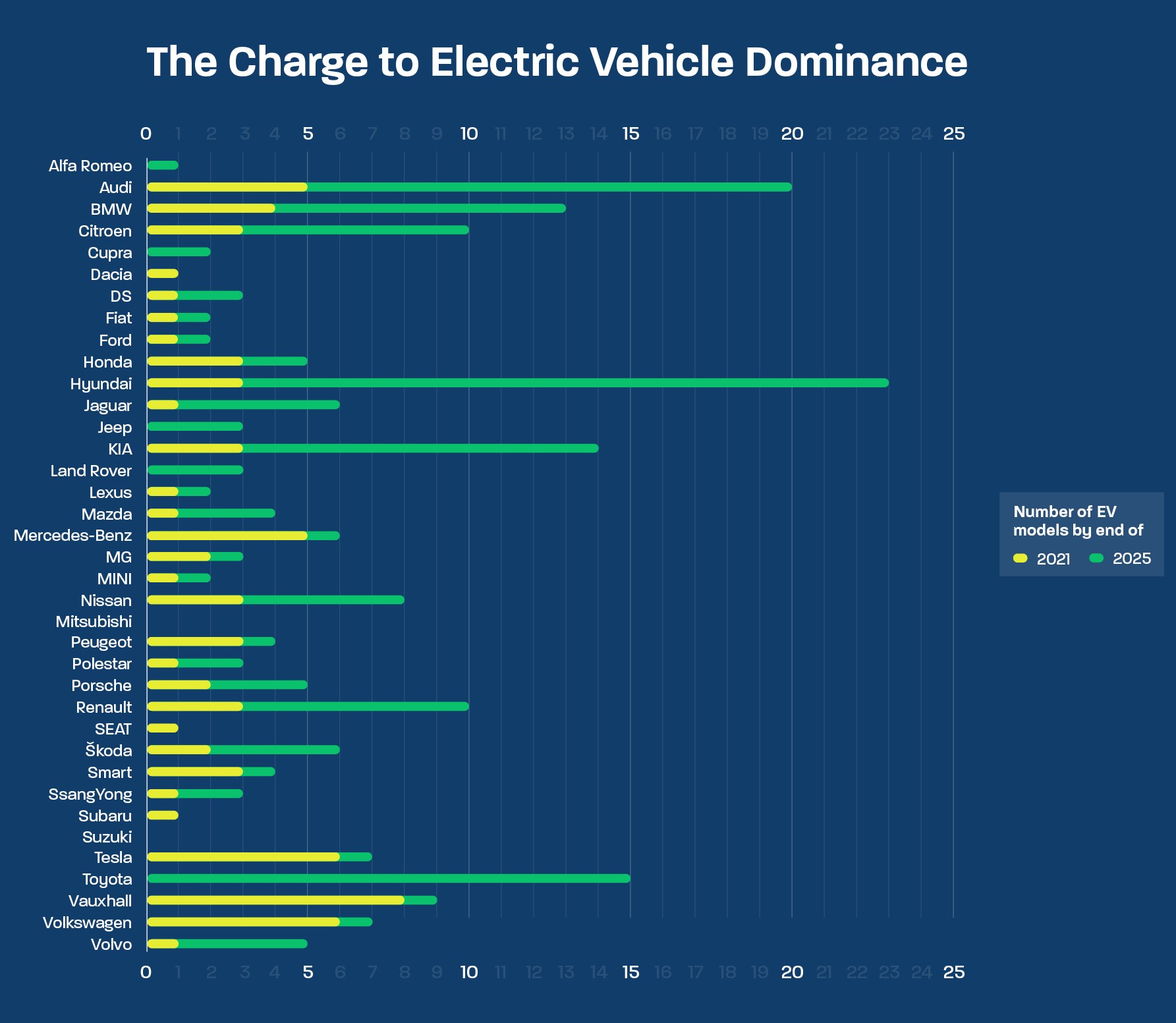 The second place in this ranking belongs to Audi, with a total of 20 models on offer by 2025. Rather surprisingly, VW Group’s premium brand will have more EVs than Volkswagen, which projects it will offer 7 models in 2025. However, the VW Group as a whole will likely be on top with 41 EVs (including 6 from Skoda, 5 from Porsche, 2 from Cupra, and 1 from SEAT)—and that’s not counting possible launches from Bentley, Lamborghini, or Bugatti.

Ranking third in this lineup is Toyota, of all brands. We say that because the Japanese company is supposed to go from zero battery-powered global EVs by the end of 2021 to 15 by the end of 2025. It is by far the most ambitious target, but not impossible given Toyota’s industrial might.

Other interesting tidbits of information regard Stellantis, which will supposedly have a total of 32 EVs by 2025, ranking third as a group behind VW and Hyundai Motor. Mind you, this projection only counts the Alfa Romeo, Citroën, DS, Fiat, Jeep, Peugeot, and Opel/Vauxhall brands—Chrysler, Dodge, and Ram are not included.

Meanwhile Tesla, the company that has brought electric vehicles into the mainstream, is poised to offer 7 models by 2025, up from 6 by the end of 2021. This information is obviously flawed, given that Tesla currently has 4 models (Model 3, Model Y, Model S, Model X) and is unlikely to launch anything else this year.

The Cybertruck has been postponed for 2022–2023, the Roadster for 2023 at the earliest, while the China-developed compact EV has no launch timeline yet. By the way, Chinese brands are not included in this projection either.