Jeep Grand Wagoneer to push up to £100k price point 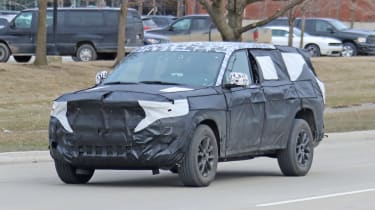 This heavily camouflaged test mule is our first look at the new Jeep Grand Wagoneer. When it eventually goes on sale, it’ll act as a premium rival for the likes of the Range Rover, BMW X5 and Porsche Cayenne. However, Jeep remains unsure whether the SUV will be sold in either the European or UK markets.

There’s easily enough space over the rear axle for a third seating row which, unlike in rivals like the Mercedes GLE and Land Rover Discovery, could be a full-sized bench seat rather than a pair of cramped jumper seats.

The Grand Wagoneer’s cabin design should also be lifted wholesale from the Jeep Grand Cherokee and, given its position as the brand’s flagship model, it’ll come with plenty of kit. Standard equipment should include an 8.4-inch infotainment screen, a digital instrument cluster, a Harman Kardon sound system and leather upholstery.

To compensate for the added bulk, we expect the Grand Wagoneer will only be available with Jeep’s most powerful engines. We’re expecting two choices – a 247bhp 3.0-litre V6 for the entry-level variant and a 700bhp supercharged 6.2-litre Hemi V8 in the range-topping model. Both engines will be offered with an automatic gearbox and four-wheel drive.

As such, the Grand Wagoneer could be the first Jeep to cost more than £100,000 – if it makes it to the UK market. Speaking at the 2016 Paris Motor Show, Jeep boss Mike Manley told Auto Express: “I don’t think there’s a maximum price ceiling per se for Jeep. If you look at the upper end of the market in the US, for me, the Grand Wagoneer done well can compete all the way through the segment.

What do you make of the Jeep Grand Wagoneer? Let us know in the comment section below…