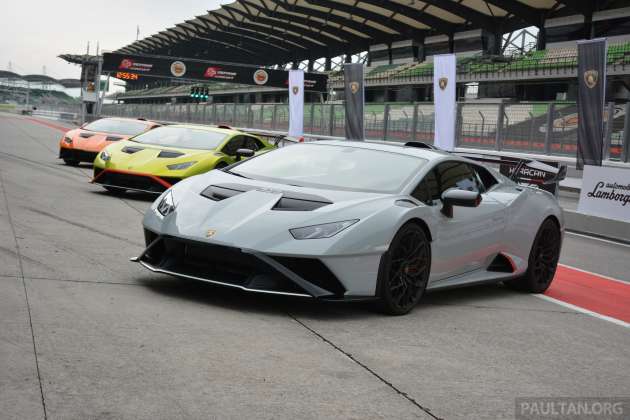 Lamborghini Kuala Lumpur recently held a dynamic launch debut for the Huracan STO at the Sepang International Circuit, around 1.5 years after the road-homologated super sports car made its global debut.

Inspired by the racing heritage of Lamborghini Squadra Corse’s one-make race series involving the Huracan Super Trofeo Evo as well as the successful Huracan GT3 Evo (three-time 24 Hours of Daytona and two-time 12 Hours of Sebring winner), the Huracan STO is a track-focused version of the Huracan we’ve been familiar with since it was first introduced to the world in 2014.

Like the Huracan Evo, a seven-speed dual-clutch transmission is paired with the engine, although it receives STO-specific tuning to deliver quicker and more responsive shifts. The all-wheel drive system is also absent here, making the STO purely rear-wheel drive. 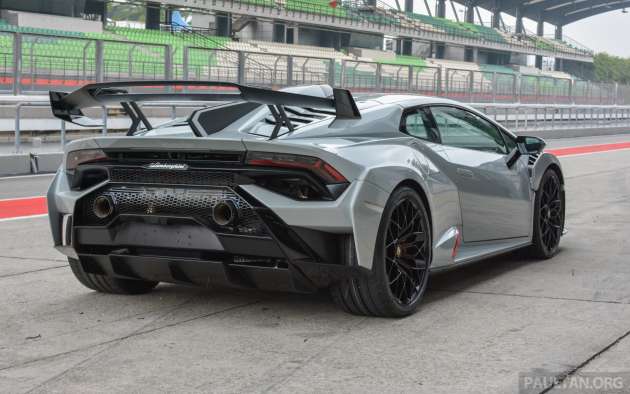 While the powertrain remains largely familiar, the rest of the STO undergoes significant changes to make it a true “race car for the road.” For starters, many of the body panels are new and specifically designed for optimum aerodynamic performance and widen the car by 21 mm over a standard Huracan Evo.

At the front, you’ll find the ‘cofango’, which is a massive clamshell that opens forwards and integrates the bonnet (‘cofano’), fenders (‘parafango’) and bumper. This one single component is inspired by the Miura and the more recent Sesto Elemento and serves to save weight as well as being a time-saving access feature in motorsports.

The front bonnet features air ducts to increase airflow through the central radiator for better cooling, while also helping generate downforce. Elsewhere, there’s a new front splitter that channels air to the underbody of the car and to the rear diffuser, and the cofango is shaped to send air over the top of the fenders, which incorporate louvres to extract air from the wheelhouse.

Moving down the sides, you’ll find rear fenders derived from the Super Trofeo Evo that are shaped to reduce drag while increasing rear downforce. These also sport NACA air intakes to feed the engine, with shortened ducts to allow for a 30% decrease in static pressure losses.

A more notable cue is the air scoop at the top of the car, which is part of a revised rear engine cover and serves to improve air cooling at the rear underhood. The new rear bonnet also gets dedicated air deflectors to help manage the high volume of air coming through the snorkel depending on the temperature state of the engine and exhaust.

You’ll also notice an integrated shark fin on the rear bonnet, which helps to straighten airflow onto the adjustable rear wing, which can be set to three positions depending on track characteristics and features a single slotted wing with double airfoils.

All these changes result a 37% improved in overall airflow efficiency and 53% more downforce compared to the previous Huracan Performante. The STO is also 43 kg lighter than its sibling thanks to a 20% lighter windscreen, magnesium wheels, the lack of all-wheel drive and having 75% of its exterior panels made from carbon-fibre, with a dry weight of just 1,339 kg.

Bridgestone also developed special Potenza Sport tyres (245/30 front and 305/30 rear) specifically for the STO as part of a partnership with Lamborghini. Identified by an ‘L’ marking on the sidewall, the STO-specific Potenza Sport tyres can be swapped out for semi-slick Potenza Race rubbers when maximum dry grip is demanded.

Other mechanical changes include the fitment of new anti-roll bars and a racing steering ratio, the latter providing a more direct steering response. The pedal mapping also gets adjustments for a linear pedal feel and direct throttle response, which suits the other track-oriented initiatives.

As a result of all these improvements, the STO takes just three seconds to get from 0-100 km/h and nine seconds for the 0-200 km/h sprint. The top speed is 15 km/h lower compared to the Huracan Evo at 310 km/h, mainly because of all the additional downforce generated, which is as much as 420 kg at 280 km/h. Lamborghini says the STO’s beefier brakes will bring it to a dead stop from 100 km/h in just 30 metres, or 110 metres from 200 km/h.

For a better idea of just how race-focused the STO is, the carmaker says it took the STO just 1 minute 48.86 seconds to lap the Daytona International Speedway. The previous hardcore Huracan, the Performante, took 1 minute 51.8 seconds, while the track-only Huracan GT3 Evo lapped the track in 1 minute 46.4 seconds.

Inside, there’s plenty of carbon-fibre in keeping with the motorsports theme, with the material also being used for the sport seats, door panels and even the floor mats. In other areas, there’s Alcantara trim and Lamborghini’s Carbonskin, while the rear titanium half cage serves as the anchor for the four-point seatbelts. For practicality, the front trunk is designed to store a helmet for track days.

Drivers will have access to three ANIMA system, with three drive modes (STO, Trofeo and Pioggia) available right on the steering wheel to manage the Lamborghini Dinamica Veicolo Integrata (LDVI), which is the car’s central brain, as well as other aspects like ESC, torque vectoring, rear-wheel steering, ABS and magnetorheological dampers.

The human machine interface also includes a touchscreen for infotainment functions and other track-focused ones like a telemetry system, drive mode indicator, LDVI system, tyre pressures and brake temperature monitoring. Owners will also have access to the Unica app to track and record their performance for further data analysis to become better drivers.

The asking price to secure all this performance isn’t cheap, as the Huracan STO goes for RM1.48 million and that’s before taxes, on-the-road costs and any personalisation you might want done through the Ad Personam programme.

The Cadillac Celestiq Concept Teasers: Is It Pronounced “Celestick” or “Celestique?”