The 2021 International GT League World Series is set to stage its third selection event, the Vintage Challenge, later today and you can catch it live right here on GTPlanet.

IGTL is a group of GT Sport‘s best drivers, and it has organized this championship for players who have reached the top A+ ranking in the game. The 2021 World Series follows on from a successful 2020 event, with the high entry standard producing high quality, high speed racing. We’ve already seen two Selection Events this year, and the standard has remained high.

Today’s race is the third of six Selection Events which will determine which 12 drivers will advance to the World Series itself later this year. Each Selection Event has its own theme, which takes in a wide range of different car classes to give players the chance to qualify, and takes the form of a 12-car race after a hotlap qualifying session.

The first event saw Quinten Jehoul and Nicolas Romero from the Euromaster Esports team qualify through the GT Nostalgia race. A second race a week later saw Edward Williams and Christian Malkii book their places in the final 12. 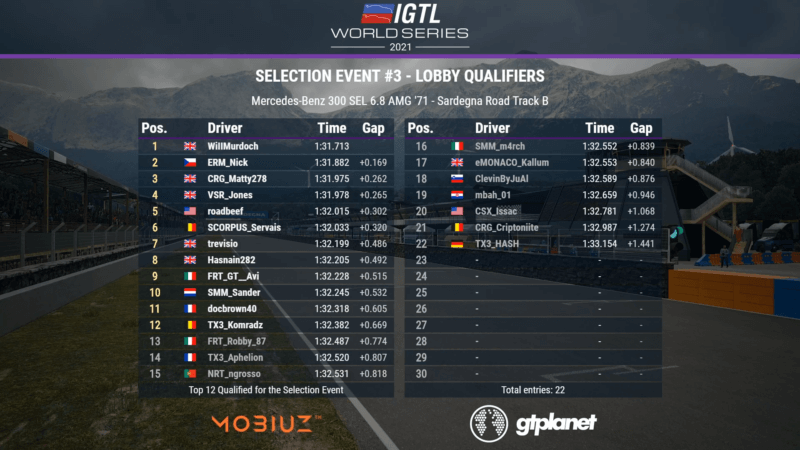 This week’s event will puts players into a real pig of a car. The Mercedes 300 SEL AMG, better known as the “Rote Sau” — or Red Pig — is the car this week, for a 35-lap race around the Sardegna Road Track B circuit. The competitors, which again include Romero and race one runner-up Will Murdoch (who is too young to qualify for the main event), will have to manage a 6x tire wear multiplier on Sports Soft rubber.

In addition, IGTL has announced this week a partnership with BenQ Mobiuz Gaming Europe. The gaming monitor supplier will provide prizes for the top three finishers in this season’s World Series, so if you like what you see in this week’s live stream and think you could do better, there’s still three more chances to qualify over the next five weeks.

The race broadcast starts at 19:00 UTC today, and you can catch all the action below: