Home » Car Reviews » Lucid Air Electric Sedan: How Much Does It Cost To Lease? Lucid Air Electric Sedan: How Much Does It Cost To Lease?

Just a few weeks ago, we reported that EV shoppers will be able to buy or lease the ultra-luxurious Lucid Air electric sedan exclusively online. The startup electric automaker launched its new in-house Lucid Financial Services, which the automaker says offers a flexible, fast and easy financing process to US customers.

According to Lucid, it’s offering 24-, 36-, and 48-month leases. At the time of writing, only shoppers interested in the range-topping $154,000 Lucid Air Grand Touring model were eligible to use the new services. However, Lucid shared that it aims to expand the service to include the $107,400 Touring and $87,400 Pure models later in 2022.

Fast-forward to the present, and Lucid Insider Blog reportedly spotted leaked screenshots from the new Lucid Financial Services leasing calculator, which reveal how much it will cost some shoppers to lease the pricey Lucid Air Grand Touring model.

According to the blog, the cost to lease the Air electric sedan depends on the usual factors, such as how many miles you want to drive, how much money you put down at signing, and the length of the lease.

A future Lucid Air owner whose car is just about ready for delivery was able to access the new Lucid Financial Services tool, and he shared screenshots on the Lucid Owners Forum website. We’ve included one of the screenshots below, though there are more available on the forum site. 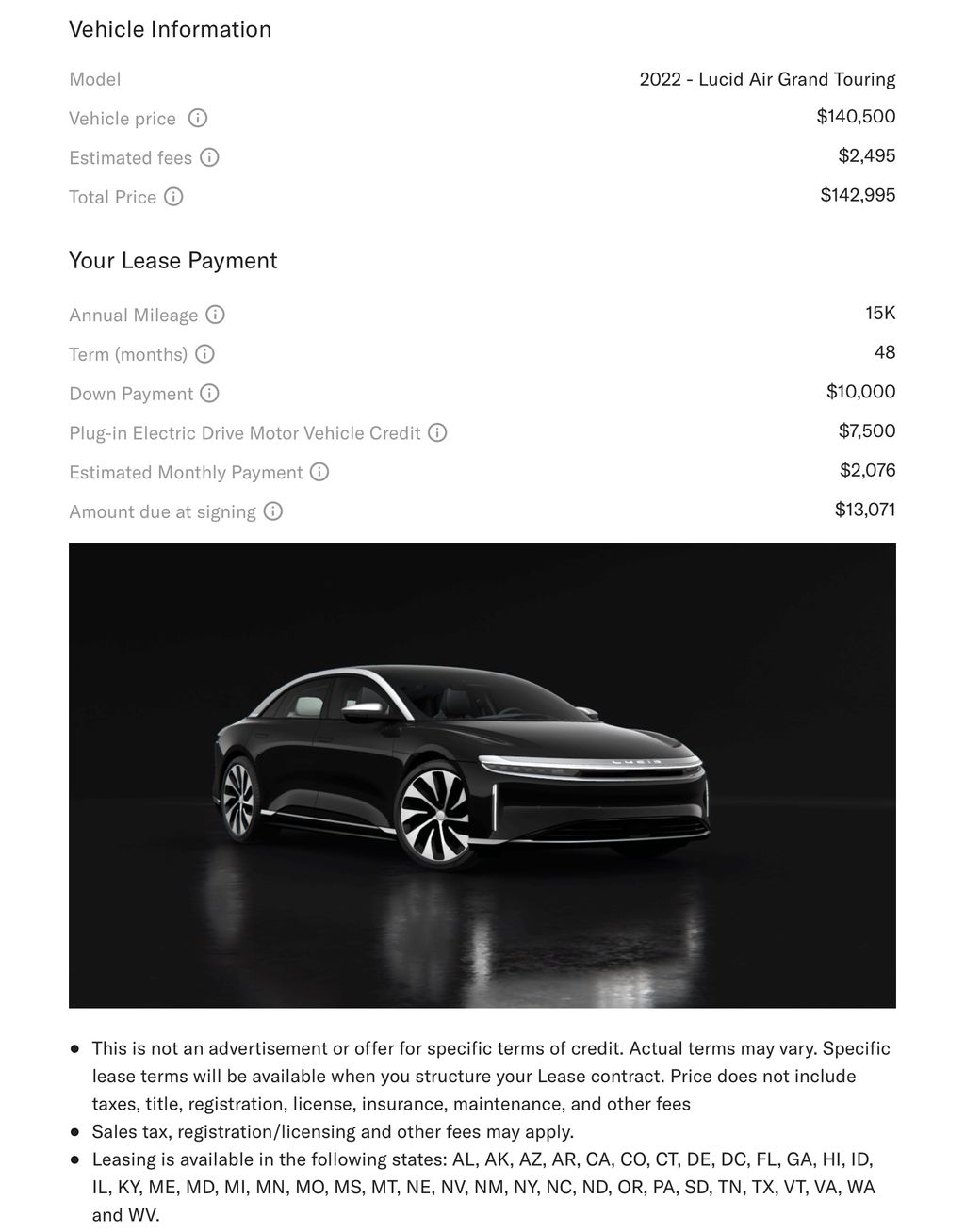 Based on the information that was shared, a 4-year 15,000-mile lease on the Lucid Air Grand Touring will require $10,000 down and result in a monthly payment of just over $2,000. It’s important to note that you’ll actually be paying $13,071 at lease signing thanks to taxes and fees.

Perhaps more important is the fact that Lucid is including the $7,500 tax credit on the lease deal, and the figure used for the lease pricing is based on the Grand Touring’s original price of $140,500, rather than its current price that’s $13,500 more.

How does this compare to rival lease deals?

Let us know what you think about Lucid’s lease pricing. It will be interesting to learn how much it costs to lease the brand’s less expensive models. Once that information becomes available, we’ll share it with you in a new article.

2023 Living Vehicle Luxury RV Trailer Can Make Its Own Water