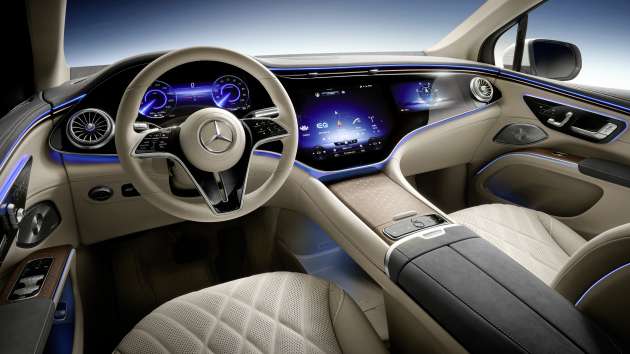 Having acknowledged its existence since 2020, Mercedes-Benz has now confirmed it will finally unveil the EQS SUV on April 19. To keep our appetites whetted until then, the company has treated us to a reveal of the car’s interior, showing us its optional seven seats.

The luxury electric crossover gets all the same features as other EQ models, including the 56-inch curved Hyperscreen display panel with triple screens, the slim centre air vents melding into the metallic strip at the top of the dashboard, and the turbine-style corner vents. One thing unique to the EQS SUV is a wood trim option with the Three-pointed Star graphic, continuing Stuttgart’s narcissistic obsession with its own branding.

While the exterior is still camouflaged, it does show a design that is exactly like what we expected – EQ-specific cues like the smooth front fascia, blanked-off grille, flush door handles and slim full-width taillights have been grafted onto a large SUV body. The front windscreen isn’t positioned quite as far forwards as on the EQS and EQE sedans, so there’s a relatively long bonnet.

As with other Mercedes large SUVs, the EQS SUV will be built in Tuscaloosa, Alabama in the United States, alongside the smaller EQE SUV. Its batteries will be assembled in a new plant in nearby Bibb County, which joins five other battery factories in Stuttgart and Kamenz in Germany, Jawor in Poland, Beijing in China and Bangkok in Thailand.

PACE 2022: Get up close with the all-electric EQA by Mercedes-EQ – enjoy great deals, RM2.5k of vouchers – paultan.org
Car Reviews