Mercedes-Benz Vans is reorganizing its European production network as part of its pivot to electric vehicles, with the big news being the addition of its first EV-exclusive plant in Jawor, Poland.

The company has signed a memorandum of understanding with the Polish government to build a new plant for the production of electric vans at a location in Jawor, a town in the southwest of the country where Mercedes-Benz Cars has been producing combustion engines since 2019 and batteries since 2021.

“As we flexibly manufacture vans with combustion and electric drivetrains in all our existing plants, we will build our first pure electric plant in Jawor. We thus set new standards and move forward on our path towards sustainable, fully electric mobility.”

Mercedes-Benz’s commercial vehicle division estimates that the location will enable it to optimize costs and supply chain as well as produce new generation vans in an energy-efficient way. 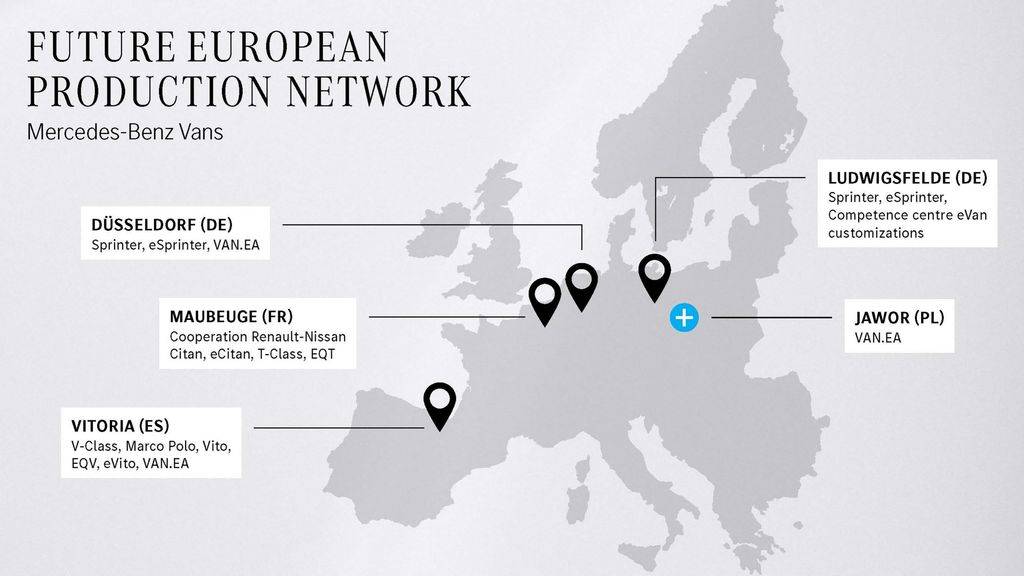 As reported by InsideEVs yesterday, the decision to expand the Jawor factory even further by establishing a new joint venture manufacturing company together with Rivian for large all-electric vans is on hold due to Rivian’s ongoing reprioritization of projects.

In addition to the announcement regarding the Jawor plant, Mercedes-Benz Vans laid out the future vision for its factories in Europe, which include the sites in Düsseldorf and Ludwigsfelde in Germany, Vitoria in Spain and Maubeuge in France (the Renault plant where it builds the Citan, eCitan, T-Class and EQT compact vans).

Mercedes-Benz Vans plans to build the next-generation eSprinter (closed model/panel van) from the second half of 2023 in Düsseldorf, where the open model designations (platform for body manufacturers or platform vehicles) of the large VAN.EA-based van will also be built in the future.

In Ludwigsfelde, the company will build the open model of the next-generation eSprinter from spring 2024, and will also establish the plant as a competence center for eVan customization. The plant in Vitoria, Spain, which currently builds the V-Class, EQV, Vito and eVito, will add a medium-sized van based on VAN.EA from the middle of the decade.

Mercedes-Benz will start producing vans based on the VAN.EA platform from 2025 as it accelerates the transformation towards a fully electric product portfolio.