As I sat in a darkened theater — feels like a decade ago — and watched Capt. America call Thor’s hammer, Mjölnir, to him in “Avengers: Endgame,” I squealed. The image of Cap holding that hammer is as iconic as it is inspiring. Who doesn’t want to be deemed worthy to carry such a weapon? I know I do.

As time went on, fantasies of carrying something of equal stature and power faded as reality sank in. Power tools, however, have a way of conjuring such dreams. And when I opened the box to Milwaukee’s positively massive M18 Fuel Half-Inch High Torque impact wrench, I felt as if Thor himself threw me his former weapon of choice. 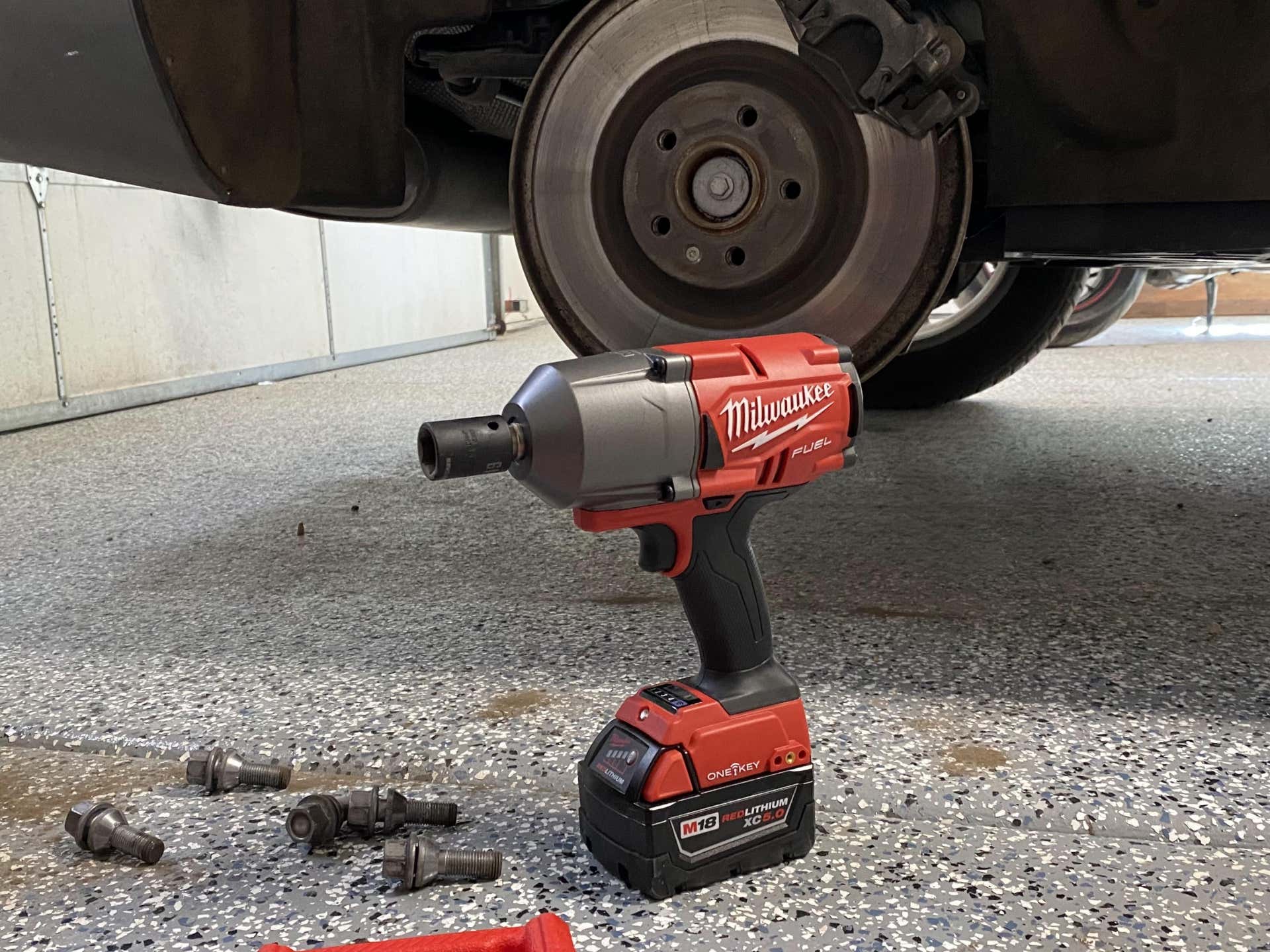 The Drive and its partners may earn a commission if you purchase a product through one of our links. Read more

The M18 Fuel Half-Inch High Torque impact wrench is one of the Wisconsin brand’s latest and greatest power tools, featuring an 18-volt lithium-ion battery (not included) and a host of features that would make most impact wrenches weep. Seriously, this thing is packed with tech, including an app where you can control the wrench’s rpm, three fastening settings, a nut-busting setting, and up to 1,400 pounds of pure, unadulterated, world-bending torque. If there were ever a real Mjölnir, Milwaukee’s power tool may just be it.

How does it stack up? Is it user friendly, does it work well enough for simple, small jobs, and will it last? To satisfy all those questions, Milwaukee sent us one to test. Here’s what I found. 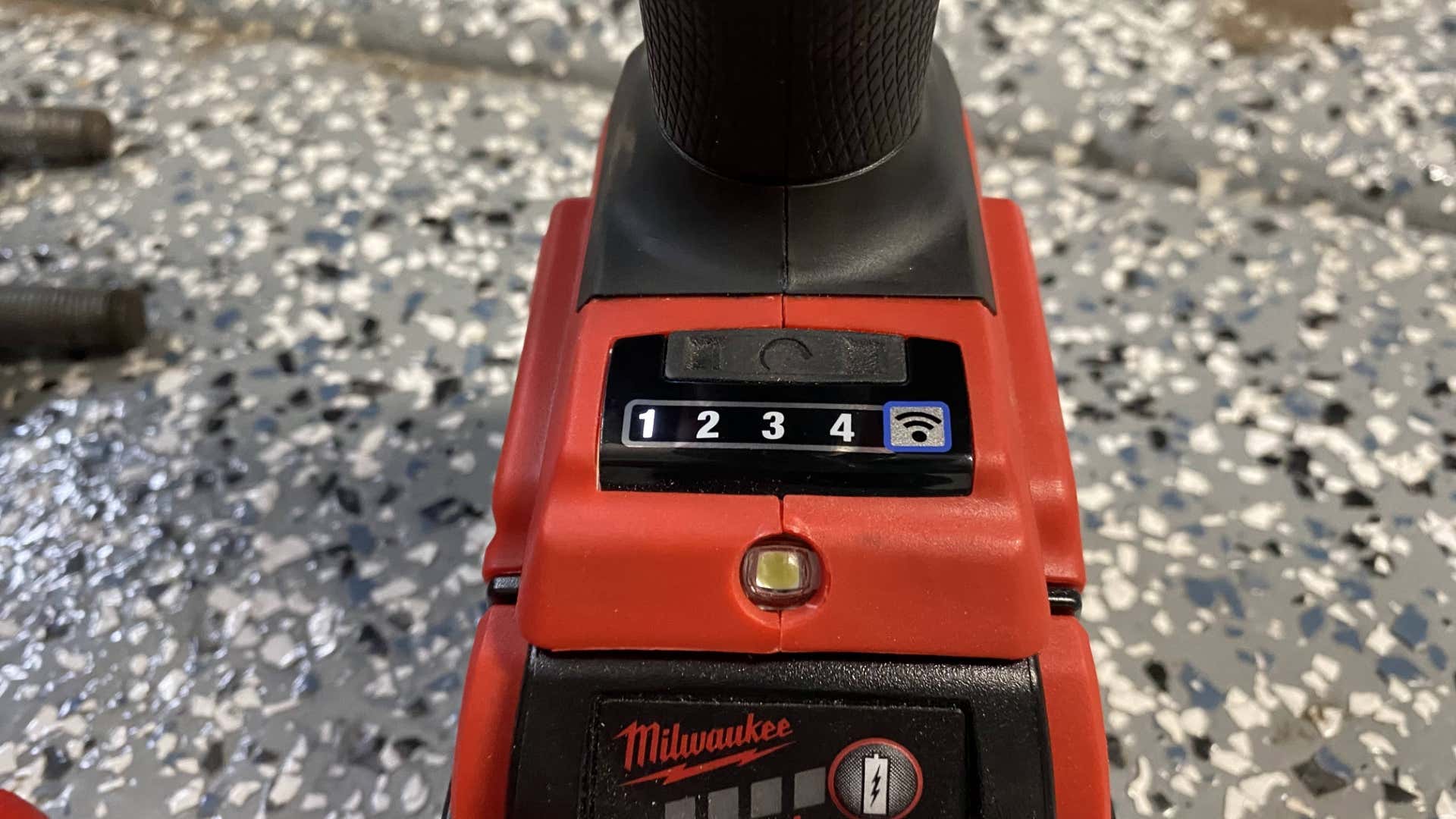 Pairing your phone to the Milwaukee One-Key app is super simple.

There’s almost nothing to unboxing this impact wrench. It’s just a simple cardboard box. Included is a set of instructions, some outward packaging that does a better job of the instructions than the paper ones included, and instructions on how to pair the impact wrench to your smartphone with Milwaukee’s One-Key app.

What isn’t included with the M18 impact wrench is a battery or a charger; those are sold separately. Since I didn’t have any other Milwaukee tools to steal batteries from, Milwaukee also sent along two batteries and a charger ($199). Once the batteries were extracted from the blow-molded plastic case and charged up, setting up the power tool was pretty straightforward.

The battery slots into the wrench easily, and once paired with your phone, you can change the torque, rpm, and job settings of each of the Milwaukee’s four modes, located at the base of the handle. (More on those later.) There’s also a nice LED light to provide illumination for darker jobs.

The impact’s battery also has a button that indicates the state of charge of the battery, which is handy as heck. 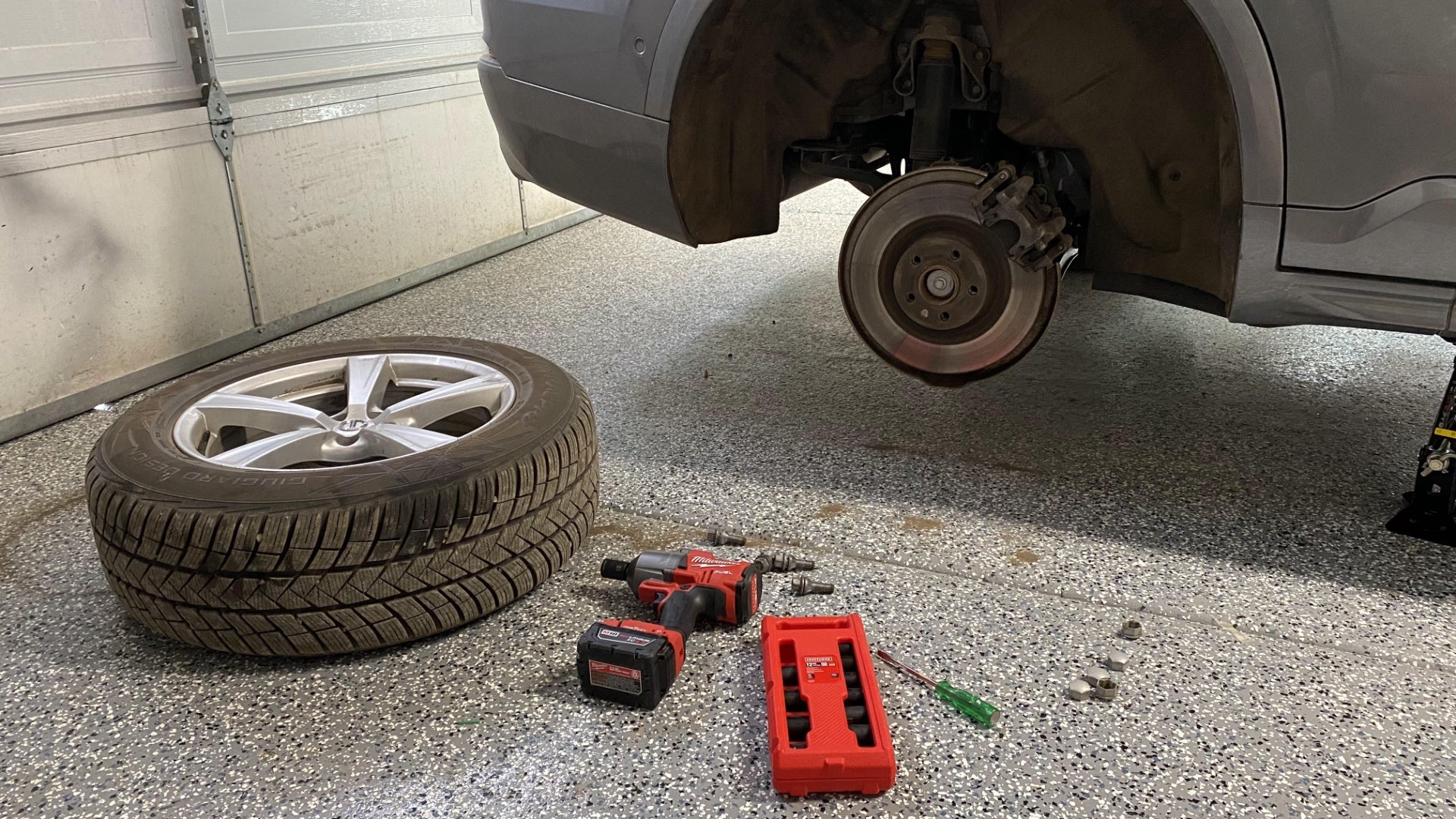 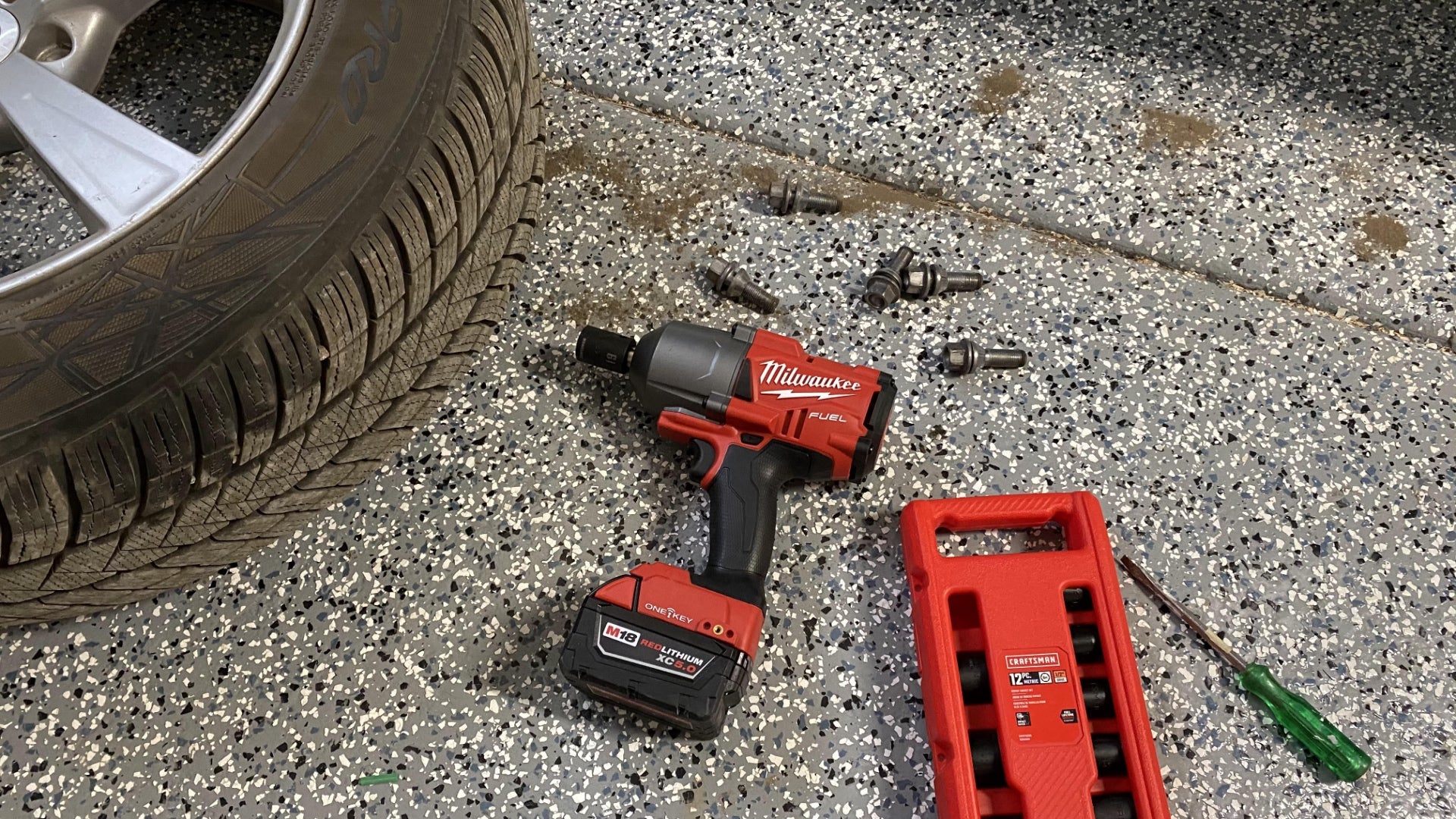 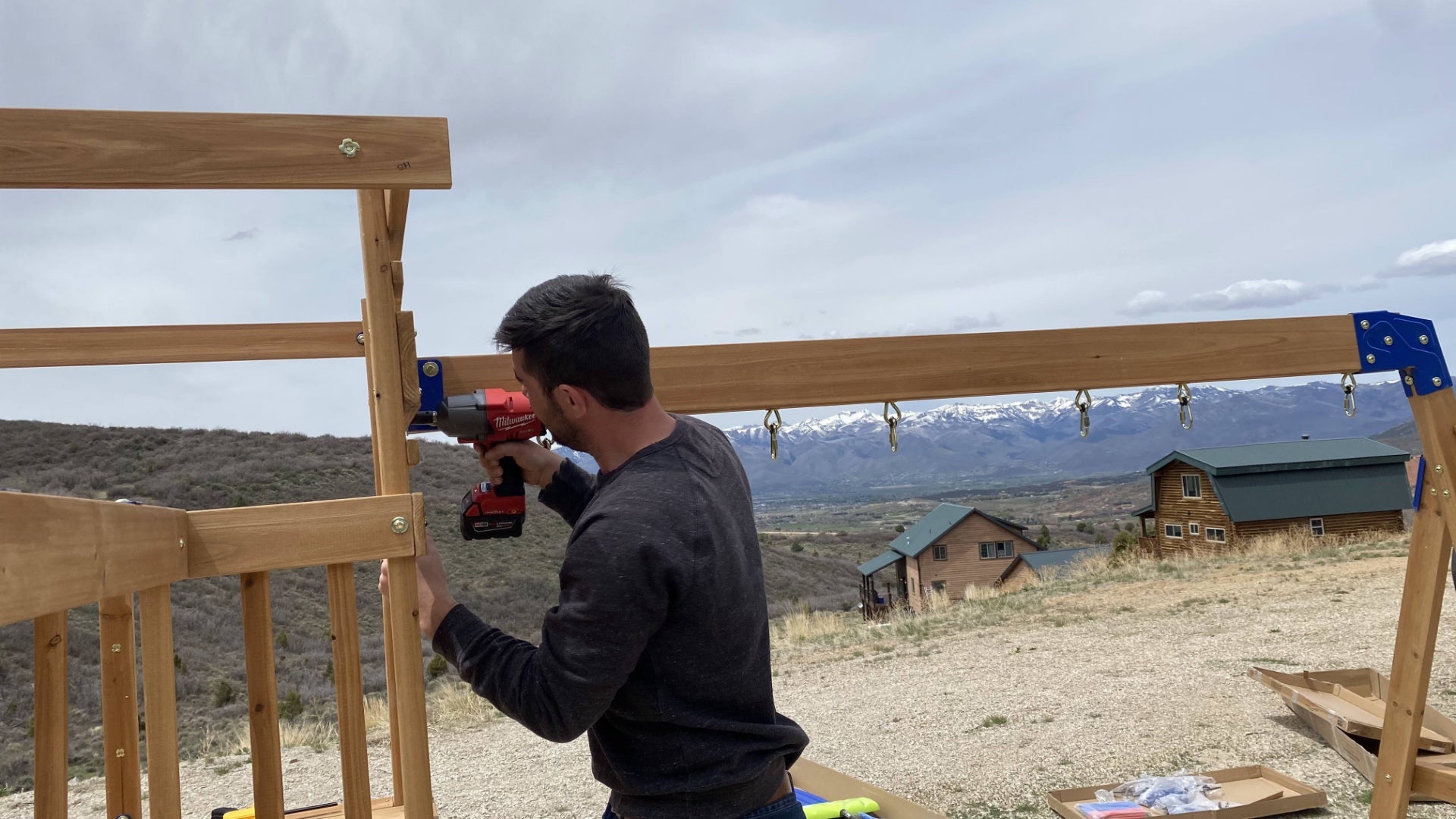 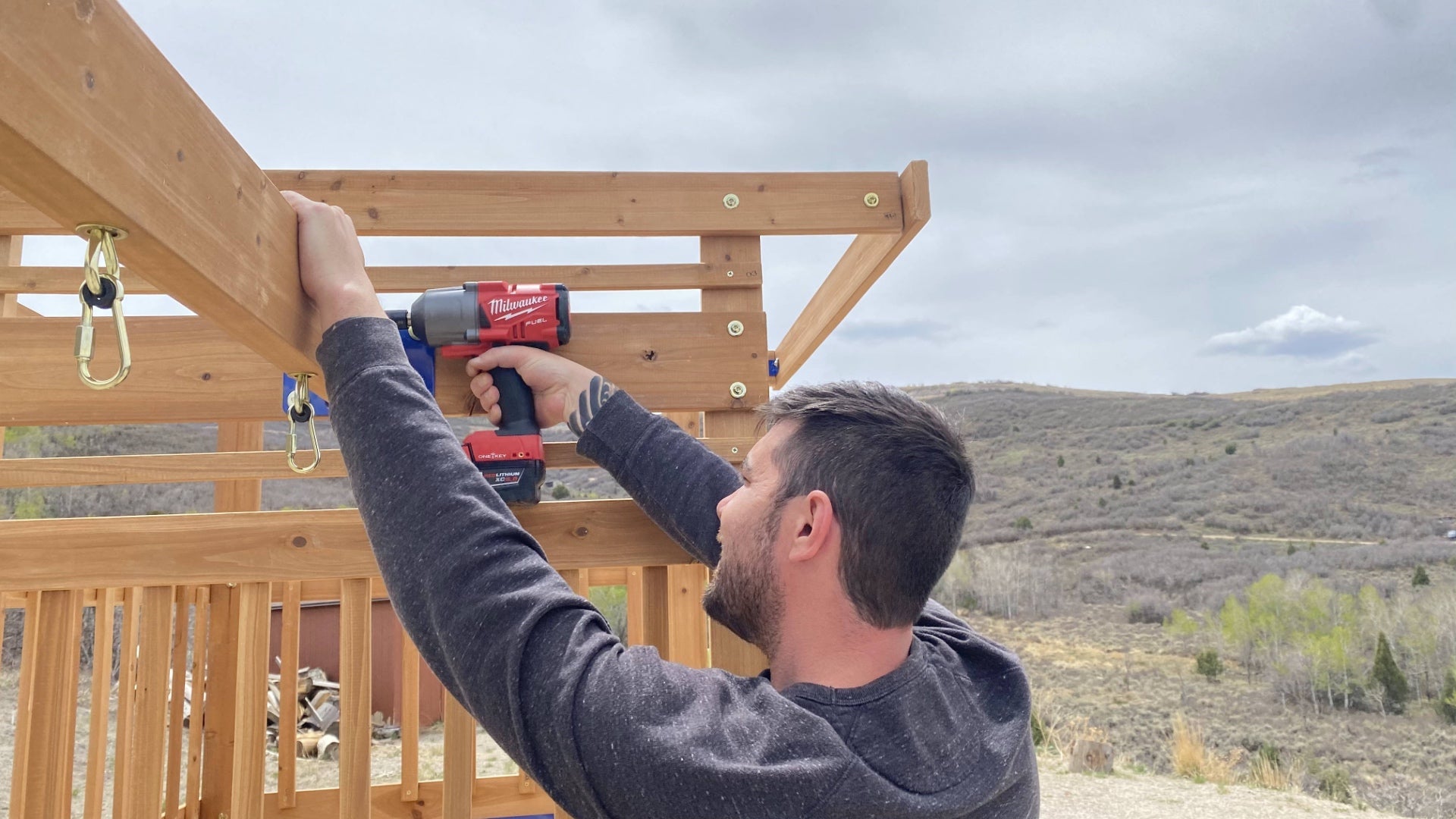 Earlier this year, my family bought and moved into a house in northern Utah. At the time, there was a considerable amount of snow on the ground, so snow tires were a must. We slapped a set of Vredestein Wintrac Pros on our Volvo, and I haven’t had an issue since. That said, it was time for a tire rotation to prevent any uneven wear.

One of the coolest features about this particular impact wrench is the option for multiple driver modes, which enable you to precisely control the wrench’s torque. There are three standard drive modes, each with its own set of specific controls. There’s Custom Drive Control, which allows you to control the impact’s maximum speed, bolt-removal speed, Precision mode, and Trigger Ramp Up. There’s Screw-In Concrete Anchor, which has the ability to set the size and length of the bolt, anchor depth, and Trigger Ramp Up. And my favorite, Lug Nut Control, which lets you select between 80-130 foot-pounds and 130-180 foot-pounds, depending on the job. It also has bolt-removal speed functionality, as well as Trigger Ramp Up speed controls, and a Star pattern infographic for help bolting a tire back on. Mjölnir doesn’t have those types of settings.

With the need to rotate my tires, I set to work. My Volvo XC90’s required torque rating is 100 foot-pounds, so I queued up the super-easy-to-use app, selected the first mode slot, clicked the 80-130 foot-pounds rating, and clicked the trigger to accept the change. Once the SUV was lifted enough to hold the wheel still but off the ground enough to loosen the bolts, I popped off the lug caps and unbolted the lugs. The Milwaukee didn’t shed a bead of sweat, and the rest of the wheels and tires came off without a hitch. 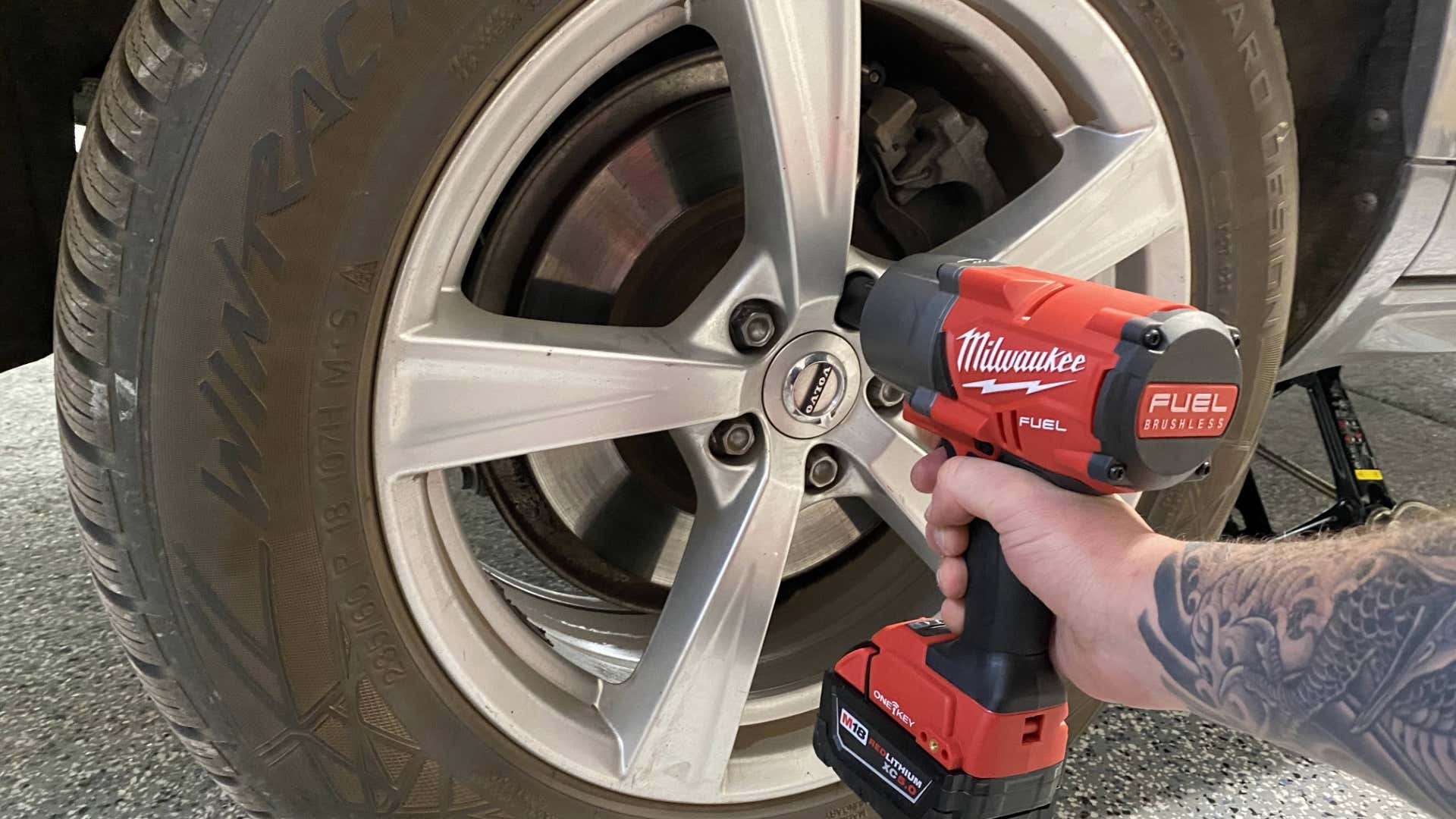 Loosening the lugs on the author’s Volvo XC90.

One trick I wasn’t able to test is a great hack for anyone with an impact wrench and an old-school scissor jack. With those tools, you can remove the jack arm and use the impact’s rotational force to easily lift your car. My Volvo has one that’s integrated into the mechanism, so without a hacksaw or bolt cutters, it wasn’t coming off.

Bolting the wheels and tires back in place was a similarly easy process. I did the same for my father-in-law as well. He hadn’t rotated his tires in almost a year. It was time for other projects.

Since we’re still somewhat moving into our home, there are a lot of jobs to do. One that sprung up on me was the addition of a children’s play set in our backyard for our three kids. In three boxes that seemed to be filled with 150,000 parts, a sea of nuts and screws and bolts and anchors were offered up in the most diabolical Lego set imaginable. All of it was meant to be put together via a flimsy wrench, an allen key, and some nearly indecipherable instructions.

Thankfully, I had the Milwaukee and the ability to set the impact’s rpm so it wouldn’t punch a hole straight through the wood. The play-set manufacturer said that it would take 10 to 15 hours to put the play set together with the provided tools. With my wife’s help and the Milwaukee set to Custom Drive Control, I cut that down to just six and a half hours. Likewise, one of the M18 18-volt batteries is all I needed for all three jobs over the course of two weeks. 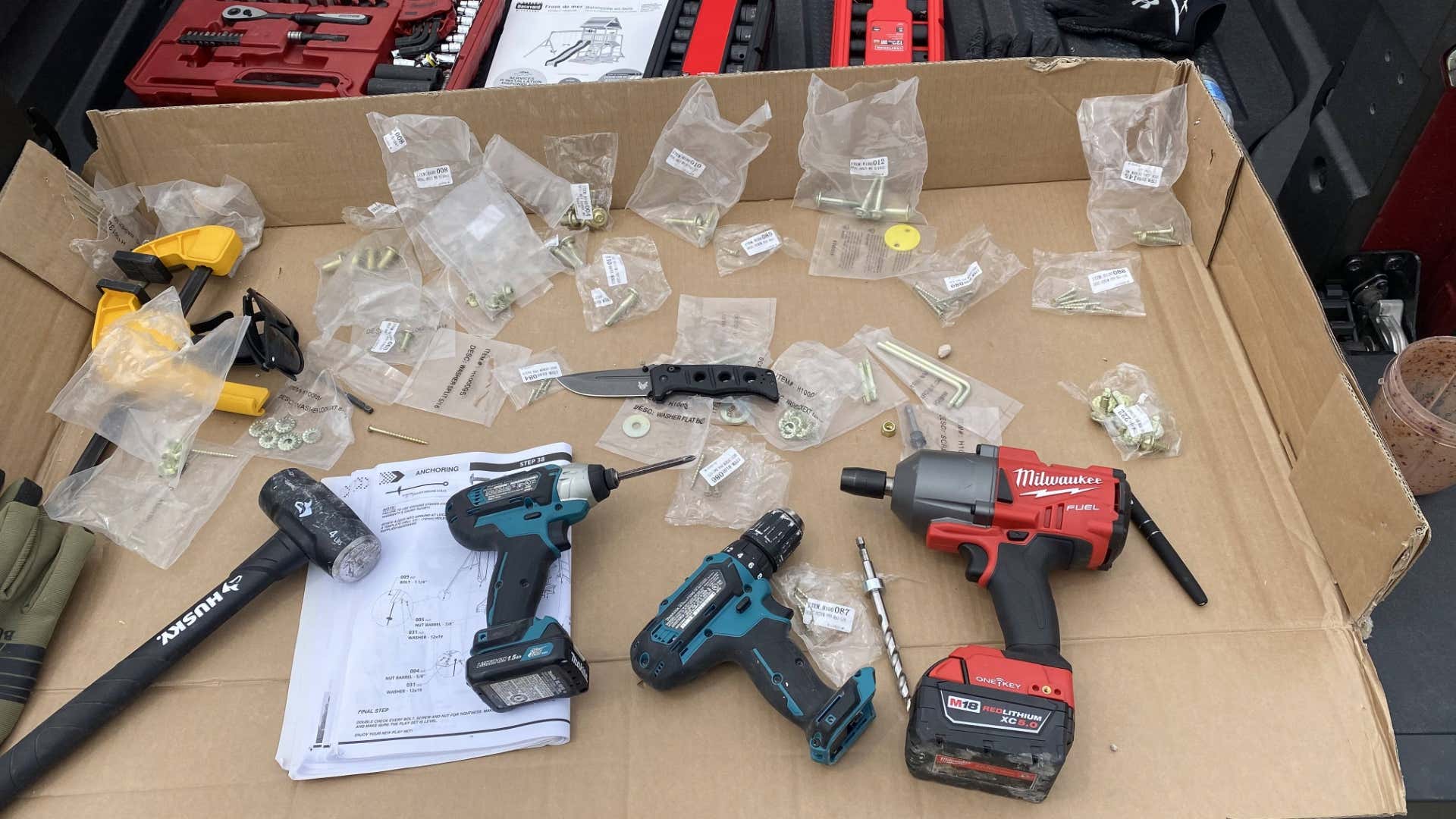 After many hours, only a few bolts left.

Milwaukee says the M18 XC 5.0 lithium-ion battery is good for five amp-hours of run time. “Each battery pack is durably built for heavy-duty use, runs cooler, and performs in climates below 0 F/-18 C,” it states. “This protection routes water away from the electronics and out of the battery pack, extends your battery’s run time and life by minimizing heat, and prevents pack failures from vibration or drops.” The battery is also interchangeable with the rest of Milwaukee’s M18 lineup of power tools. (I may be looking at Milwaukee’s M18 chainsaw at the moment.)

I can attest to the drop point. While I was working on the swing set, I dropped the Milwaukee a few times, and it kept chugging along. I even tossed it onto the garage floor when I was removing the wheels and tires, but that wasn’t a big concern, either. This is a beast of a tool. 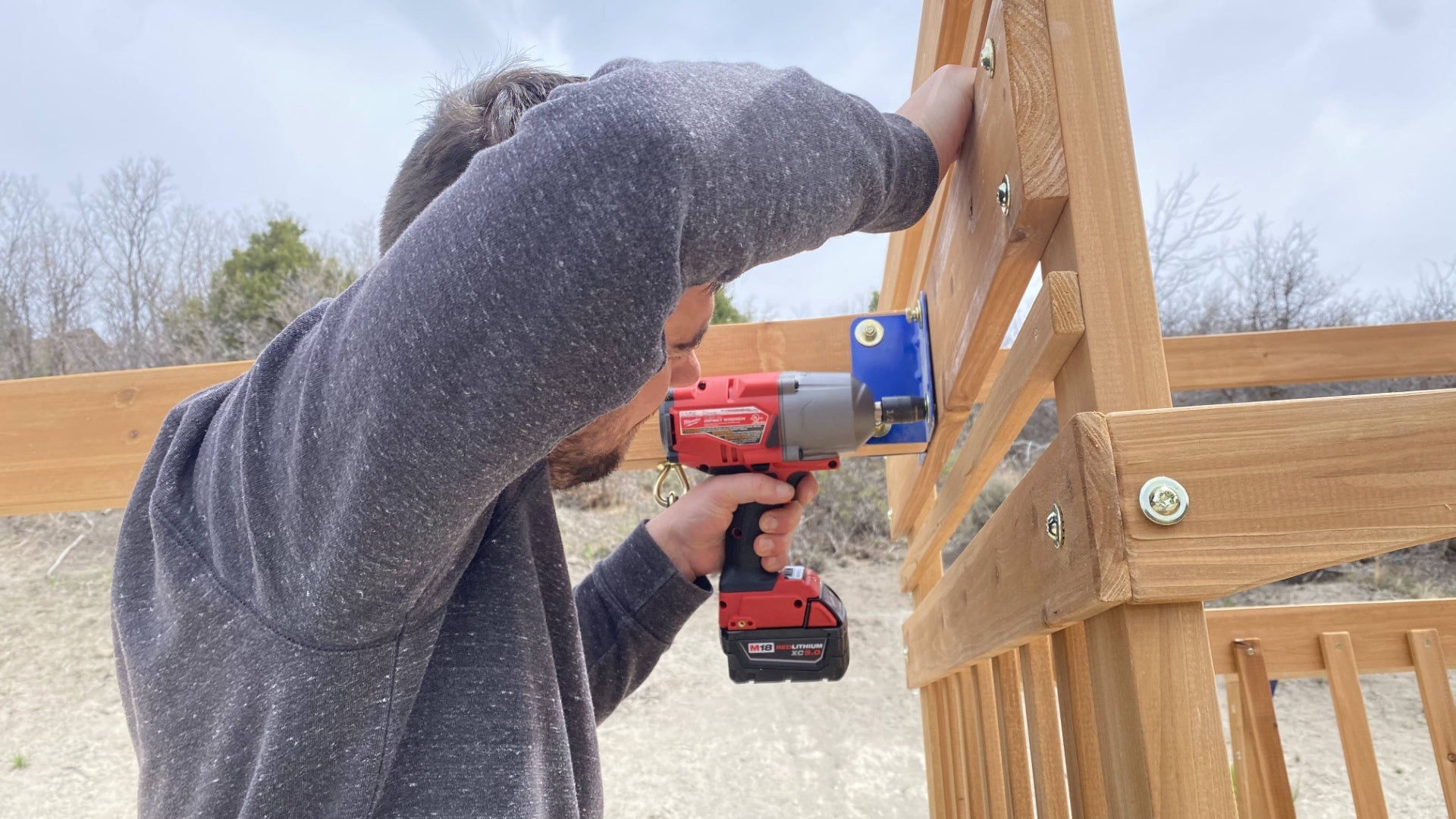 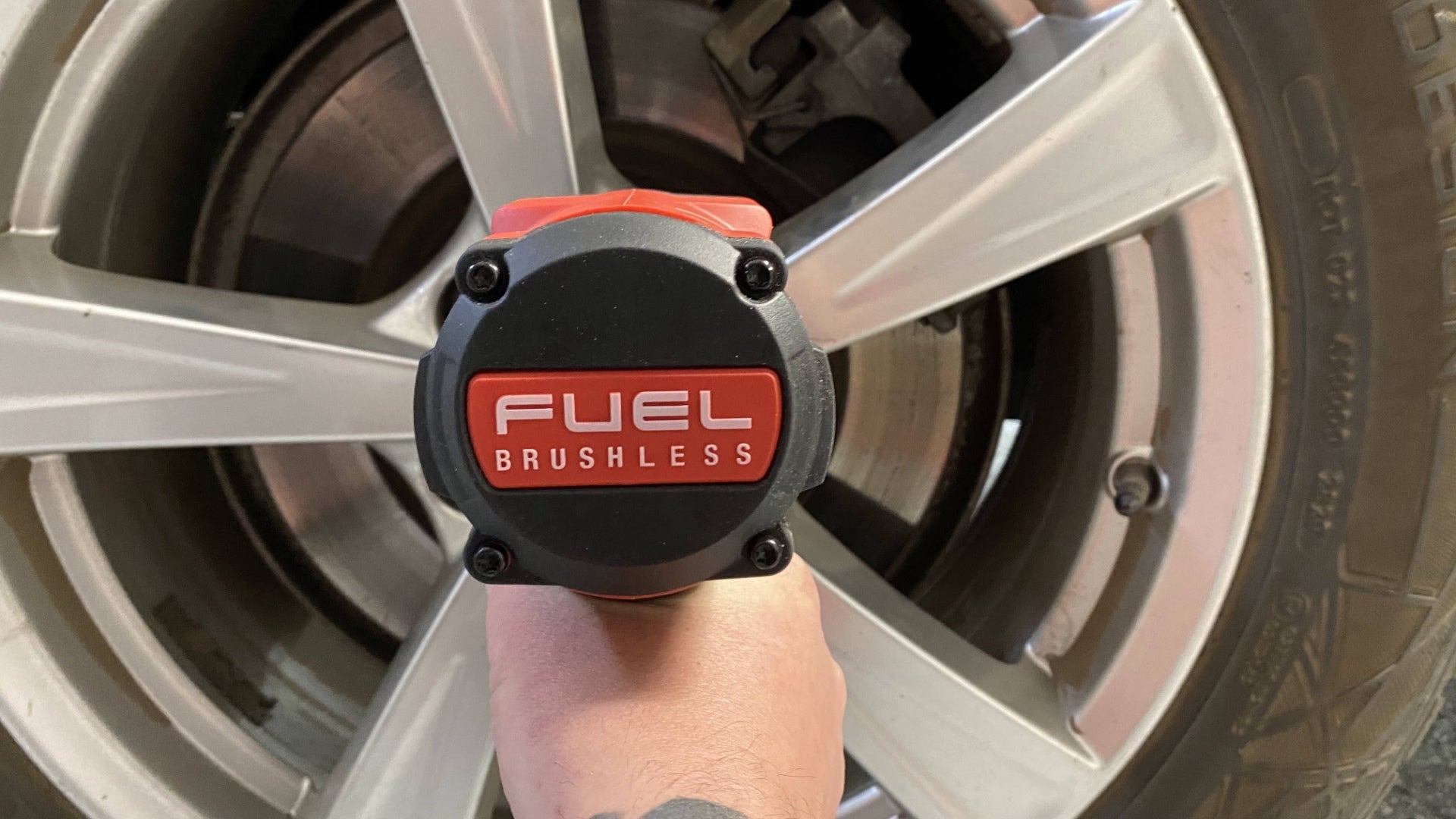 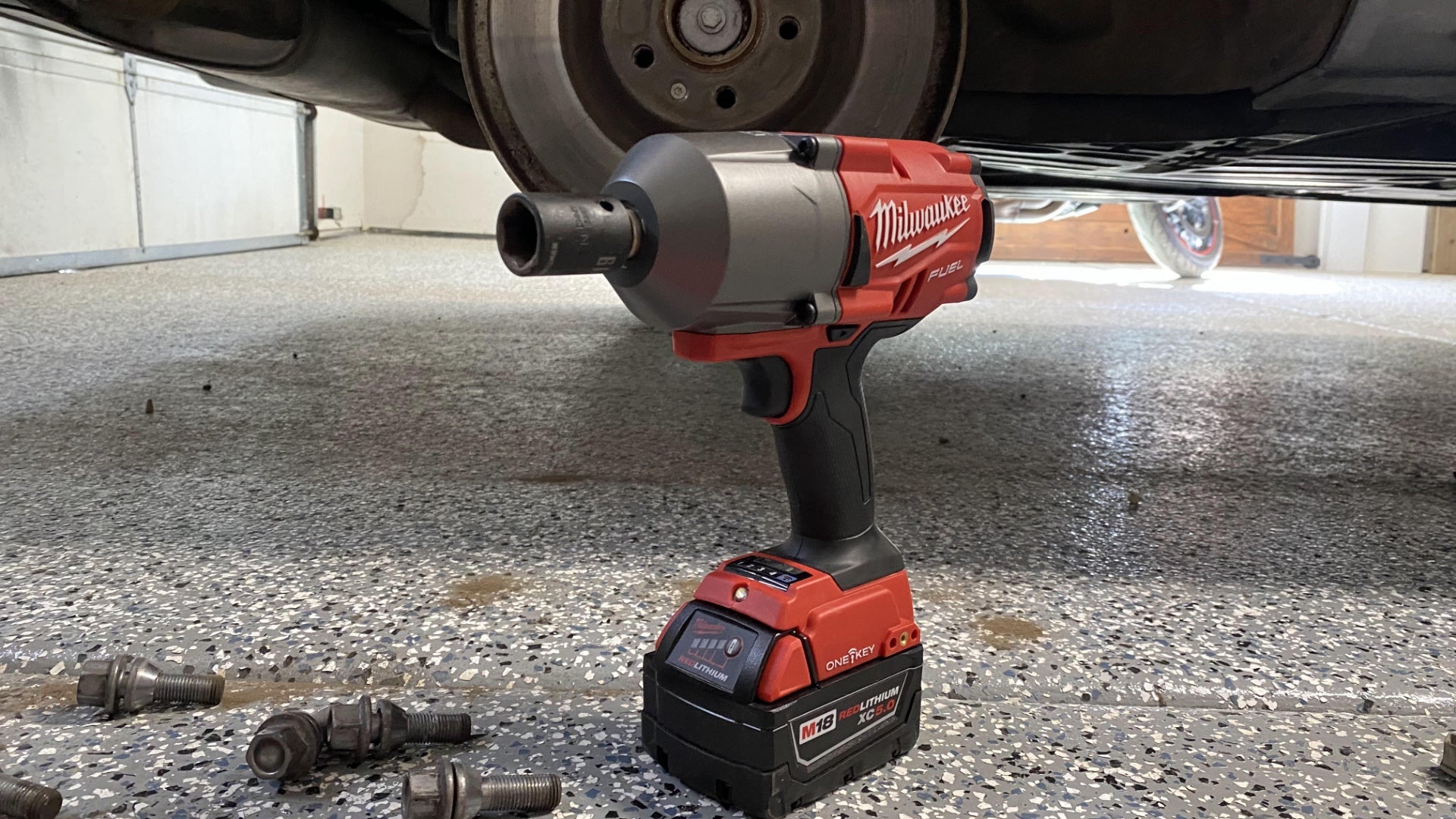 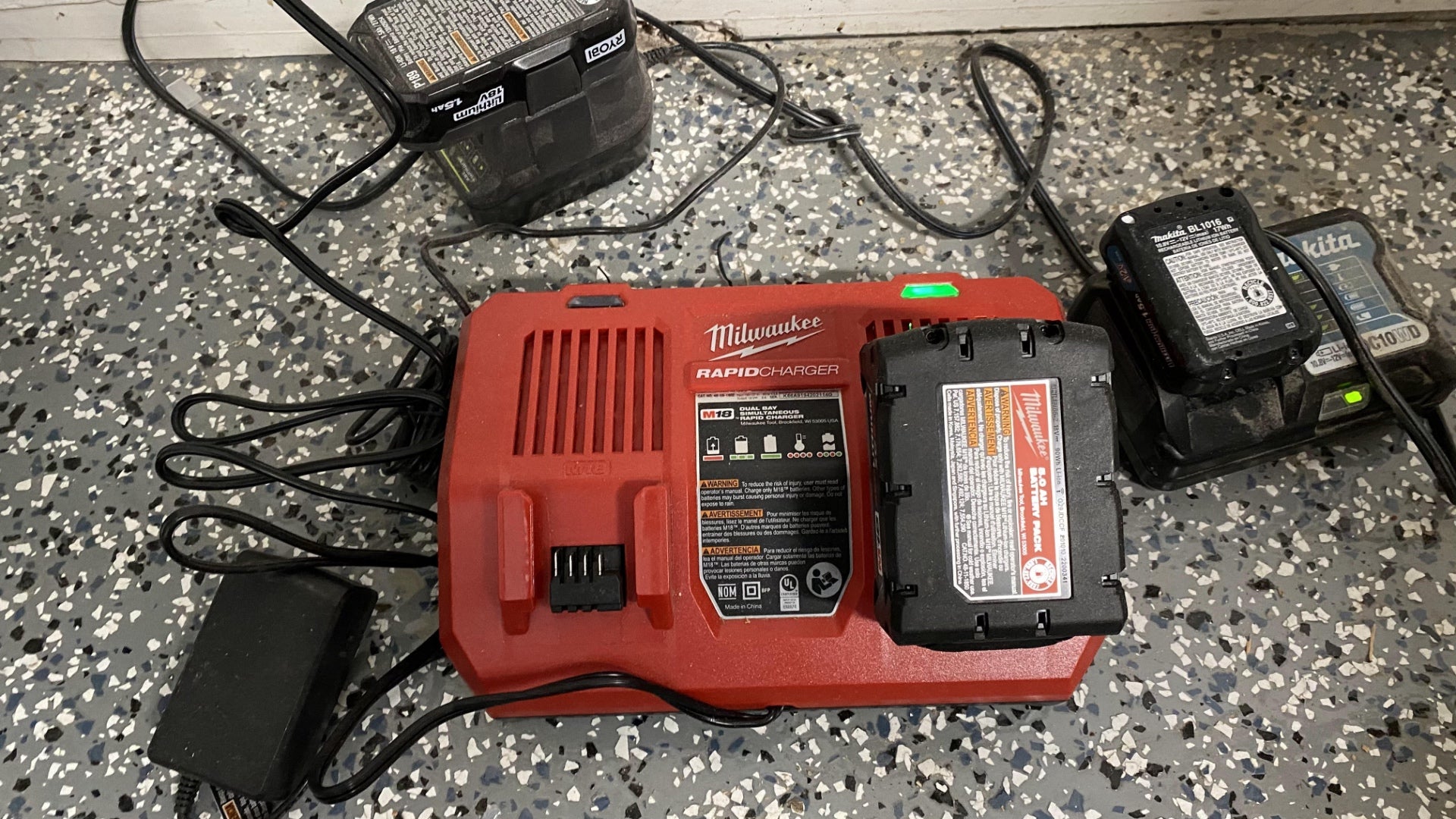 Although the power is addictive and makes you feel like a Marvel character, it’s the adaptability offered through the Milwaukee’s settings that hooked me. I love a multi-tool because of its ability to do so many jobs, and that’s what the Milwaukee offers.

Having the ability to switch from automotive, household, concrete, and other projects is extremely nice, especially given the Milwaukee’s price of about $250. For that type of money, I want a tool that’s not a one-hit wonder. I want something that can do a bunch of projects without fail. The Milwaukee does that, and I can’t wait to test its concrete and deck-building skills in the near future, so stay tuned for a possible update.

For those working on your cars, there’s an available setting within Custom Drive Control that allows you to use the full 1,400 pound-feet of torque to remove or break those rusted-on bolts that are no longer needed. Blowtorches, begone!

Milwaukee offers a five-year limited warranty: “Subject to certain exceptions, Milwaukee will repair or replace any part on an electric power tool which, after examination, is determined by Milwaukee to be defective in material or workmanship for a period of five years after the date of purchase unless otherwise noted.” That doesn’t include normal wear items, however. 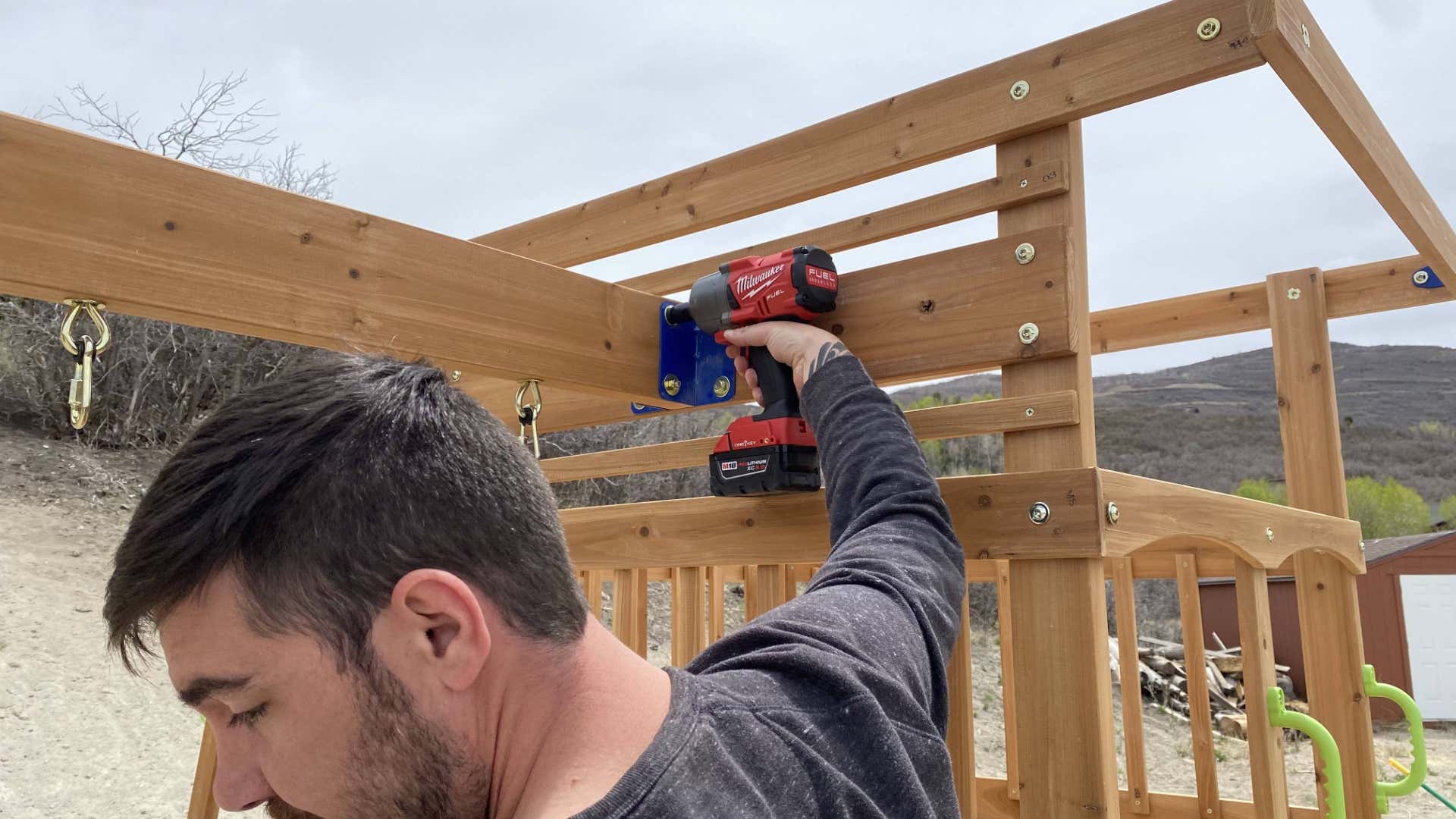 Although I could harp on the price or lack of included battery or the cost of the battery and battery charger, it’s all to be expected for the performance and customization offered. Yes, it’s expensive, but if you’re buying a tool such as this Milwaukee, it’s comparable to a DeWalt or Makita.

One drawback may be that this isn’t a light power tool. With the battery attached, it weighs a whopping 7.5 pounds. That’s a shoulder killer or, at the end of the day, might make you resemble Steve Rogers after an injection of Dr. Erskine’s Super Soldier Serum. I know my arm was sore after holding up this beast while bolting the swing bracing to the rest of the play set.

Our Verdict on the Milwaukee M18 Fuel Half-Inch Impact Wrench

Most heavy jobs can be accomplished with the Milwaukee M18 Fuel Half-Inch impact wrench. I wouldn’t suggest using it to bolt together your engine. That requires a torque wrench and more precision than any impact wrench offers. Milwaukee gets extremely close to replacing that tool, along with a host of others with this impact, though. The customizable modes, the varying rpm and torque settings, the sheer power — it’s damn near perfect.

If you’re in the market for a new impact, one that could restart the Earth’s core, if necessary, as well as do just about everything else, it’s a solid option in a sea of middling to average wrenches. It will cost you a pretty penny, however.

If you’re in the market for a new impact, one that could restart the Earth’s core, if necessary, as well as do just about everything else, it’s a solid option in a sea of middling to average wrenches.

You’ve got questions. The Drive has answers.

Q. Why does it cost so much?

A. Power isn’t cheap, my friend. The tool is built like a brickhouse and, if my 15-year-old Milwaukee corded drill is any indication of longevity, it’ll withstand the test of time.

Q. Is Milwaukee better than DeWalt?

A. I’ve used both over the years. My dad’s a die-hard DeWalt man, but I’ve never seen the allure. My garage is full of Makita, Milwaukee, and Ryobi power tools.

Q. Does the Milwaukee have a friction ring or pin-detent socket system?

The Drive’s Gear section is our brand-new baby, and we want it to grow. To give you, our dear readers, clarity on the process, the products we get in arrive from a variety of sources, including those we purchase ourselves and those we receive from manufacturers. No matter the source, we maintain our editorial independence and will always give you our honest assessment of any product we test.

We cannot be bought. Unless you wave $1 billion in our faces. Maybe then we’ll consider it.

Let’s Talk: Comment Below To Talk With The Drive’s Editors

We’re here to be expert guides in everything How To and Product related. Use us, compliment us, yell at us. Comment below, and let’s talk, y’all. You can also shout at us on Twitter or Instagram. You can also reach us at [email protected].