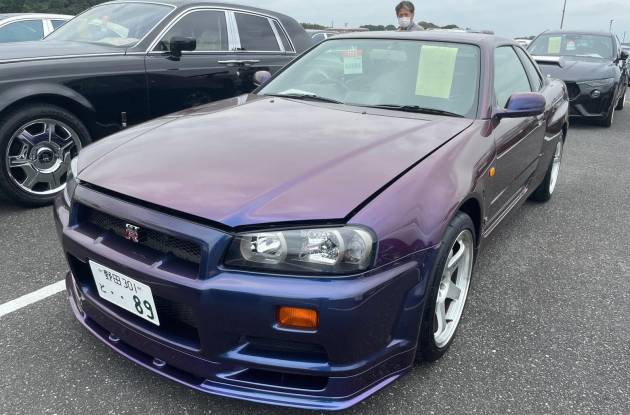 Godzilla strikes again! Just yesterday, a beautifully mint R34 Nissan GT-R V-Spec with just 6,539 km on the clock went under the hammer, fetching a staggering 36,885,000 yen (RM1.38 million). That’s only the cost of the car, mind you. Shipping, taxes and import costs were not yet accounted for.

It’s understood that the purchaser was one Cars from Japan, an Australian JDM car specialist. While the company trades and maintains JDM cars, it was revealed that this immaculate example in Midnight Purple III will be kept as part of its private collection.

According to GTR-Registry, the sale was the third highest price ever paid for an R34 GT-R at a public auction. Earlier in July, a GT-R V-Spec II Nür was sold for an eye-watering 60,500,001 yen (RM2.26 million including taxes), and there’s also a Millenium Jade model going for RM2 million by Mutiara Motors, in case you’re interested.

The registry also revealed that only 199 units of the MY2000 GT-R models were finished in Midnight Purple III, more than half of which were the V-Spec trim. Power comes from a 2.6 litre RB26DETT twin-turbo inline-six engine, officially making 284 PS at 6,800 rpm and 397 Nm of torque at 4,400 rpm.

A six-speed close-ratio manual sends drive to all four wheels, propelling it from standstill to 100 km/h in 4.9 seconds before maxing out at 249 km/h. The V-Spec’s ATTESA E-TS Pro AWD system featured an electronically-controlled limited-slip differential to improve traction, and it shipped with stiffer suspension compared to the regular GT-R.

Now, can the astronomically high prices of these R34s be justified in 2021, and can it really live up to the hype? Click here to see what Craig Lieberman, a GT-R enthusiast himself, has to say.