Maserati plans to launch an all-electric version of every model it offers, including the GranTurismo. It will be the brand’s first all-electric model. The automaker is currently working on the next-generation GranTurismo and GranCabriolet. A new batch of spy shots provides us our first look at the all-electric two-door, which has a few noticeable changes compared to the gas-powered model we’ve spotted.

The coupe in the new shots doesn’t look that different, but a closer inspection reveals EV-specific touches. The air intakes in the front bumper are fake, and the car lacks any exhaust outlets at the back. The biggest tell is the lack of a fuel door on the rear fenders and the positioning of the charge port – it’s located beneath the taillights next to the trunk. The wheels look more aerodynamic, too. 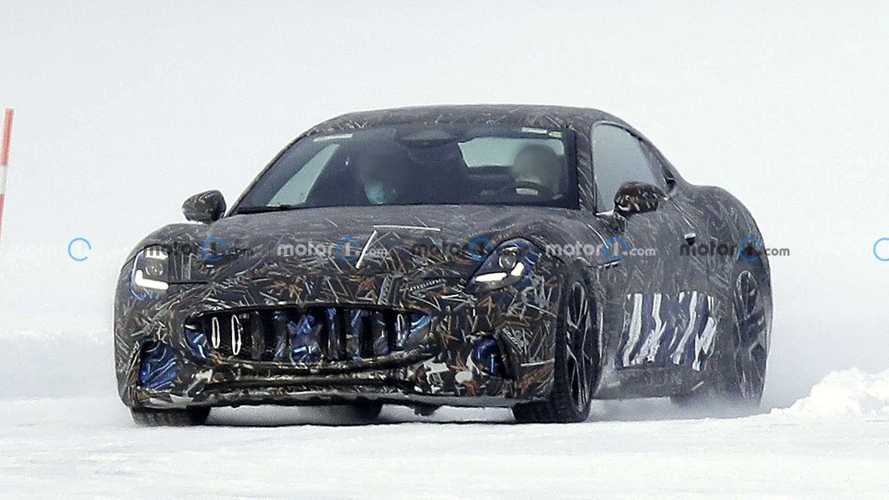 Other than those changes, the GranTurismo E doesn’t look that different from the gas-powered version. The new GT doesn’t look too different from its predecessor, with familiar styling cues and Maserati design touches. The car looks like an evolution of what came before it, and that’s not a bad thing. The interior is one place that should see a massive update, though, with Maserati packing in the technology and new screens.

It’s too early to tell what will power the new Maserati EV. The company hasn’t provided any indication about the all-electric powertrain, and we likely won’t get more information until we’re closer to the model’s launch. It’ll be interesting to see how Maserati packages the powertrain into the two-door, as most automakers have focused on developing all-electric crossover, SUVs, and bonkers hypercars. Range and weight will be key figures to monitor.

The GranTurismo will offer several powertrains, with the battery-electric one likely becoming a tiny sliver of the model’s overall sales. Rumors continue to circulate, suggesting that Maserati will use a less-powerful version of the 621-horsepower (456-kilowatt) twin-turbo Nettuno V6 from the MC20.

Maserati hasn’t announced a debut date for the new GranTurismo. However, we hope to see the new GT early this year, with the all-electric version likely debuting later. The GT is already losing some of its camouflage, so a reveal of the gas-powered version should happen soon.