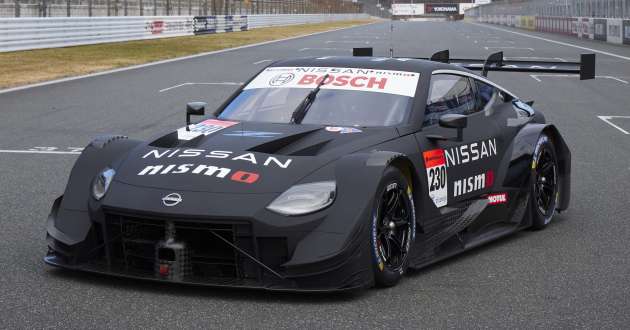 Nissan, with Nissan Motorsports International (Nismo) has unveiled the Nissan Z GT500 race car for the 2022 Super GT racing series in Japan. This succeeds the Nissan GT-R Nismo GT500, and the new Z GT500 will mark the first time in 14 years that a Z-badged Nissan will compete in the top GT500 class of the series, last represented by the Z33-generation 350Z from 2004 until 2007.

The model’s racing heritage dates back to the early 1970s, where Nissan found racing success in the United States with the S30 240Z that was entered into the SCCA C Production racing class. Later on in the Nineties, the Z32-generation 300ZX saw multiple race wins in the North American IMSA series, while participation in the JTGC/Super GT saw success in the 2000s with the 350Z, eventually taking the series title.

No specifications have been released for the Nissan Z GT500, though with Super GT being run to FIA Class 1 regulations which are also applied to the Deutsche Tourerwagen Masters (DTM) in Germany, this means that all competing cars are required to run a 2.0 litre turbocharged four-cylinder engine, and which also means that there will not be engines from production vehicles used.

Should Nissan decide to build a version of the Nissan Z to suit the GT300 category, the more production-based nature of the category could see the use of the road car’s engine, which is a 3.0 litre twin-turbo V6 unit producing 405 PS and 475 Nm in road trim. Nissan’s GT300 racers entered in Japan were based on the GT-R Nismo GT3, which raced in production-based categories in Europe.

“We are entering the 2022 Super GT series with our all-new Nissan Z GT500 car and our huge passion for motorsports. We hope that our fans will continue to passionately support the Nissan and Nismo motorsport teams,” said Nismo president and CEO Takao Katagiri.

“The Nissan Z GT500 symbolises Nissan’s spirit of taking on challenges and bringing excitement to life. Through our racing efforts we continue to innovate our cars and we race to win with the same daring we have displayed so many times over the years,” said Nissan COO Ashwani Gupta.