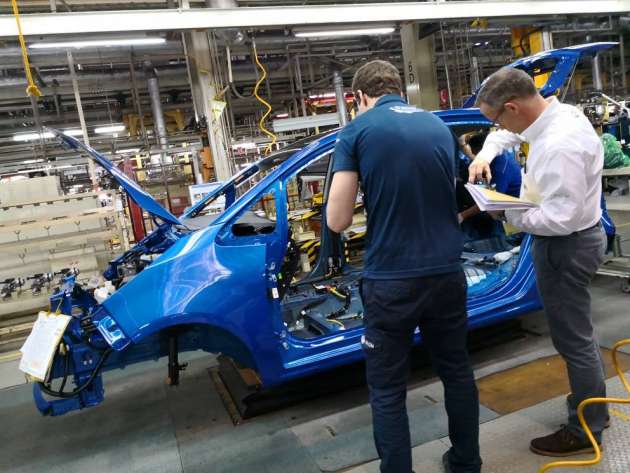 Proton Motorsport has, for the first time, took to its Facebook page to publish some previously unreleased pictures of the Iriz R5‘s homologation process by the International Automobile Federation (FIA). The photos are merely a small peek into the exhaustively elaborate process which was completed back in 2019.

In the photo set, we could see FIA representatives validating the race car at Proton’s Tanjung Malim plant. This meant cross-checking its dimensions and measurements with the production Iriz (including various other critical components), ensuring that the data provided was accurate. This was further corroborated with computer-aided design (CAD) data.

There were also discussions between the FIA folks and Proton staff from the engineering, prototyping and motorsports divisions. All these pretty much aligns with what Chris Mellors, founder and team principal of Mellors Elliot Motorsports (MEM), had told us during his visit to Malaysia two years back.

According to him, all developments relating to the Iriz R5 were overseen by the FIA, and the process was stricter than it had been before. Every part was documented and specially photographed before submitting to FIA for verification, along their CAD data.

It was a painstakingly meticulous process, and the fact that MEM is headquartered in Bakewell, the UK, made the procedure slightly lengthier than usual. An FIA homologation is only valid for five years, and one of the mandatory criteria is that the car must be a series production model with a minimum annual volume of 2,500 units.

Once everything checks out, then only can the transformation process begin. Even during this phase, FIA reps kept a close eye on production to make sure the specs don’t deviate from what has been approved. That included the front suspension geometry and FIA-approved all-wheel drive system, the latter a standardised component for every participating R5 vehicle.

The whole homologation process took three full years, and in March 2019, the Iriz R5 was completely homologated. Because its specifications won’t change, it can still compete in the WRC2 category until the 2024 season. Now, find out why MEM chose to go with the Proton Iriz in the first place, and why it decided to go with the Inspira’s 4B11 mill. Also, check out how much it costs to run!

AD: Stand out from the crowd with the MINI Heritage Edition – get yours now, only at Ingress Auto Bangsar! – paultan.org
Car Reviews