Home » Car Reviews » RAC Warning: Britons are not prepared for winter – get your car up to scratch today RAC Warning: Britons are not prepared for winter – get your car up to scratch today

Many road users do not carry basic safety equipment to deal with emergency breakdowns despite almost 21million people admitting to suffering a breakdown incident at some point during their lifetime. Research from the RAC and NUF Mutual revealed motorists were more likely to keep items such as sunglasses or an umbrella in their vehicles rather than breakdown tools such as jump-start cables.

Motorists were also more likely to keep loose change or mints in their machines over a torch or a red warning triangle.

Just 16 percent of motorists admitted to having a bottle of spare oil in their car as just one in five said they carried warm clothes or blankets in case they suffered a breakdown.

Just 31 percent revealed they had a road atlas in their vehicle as 43 percent said they carried a phone charger to top-up their battery on the move. 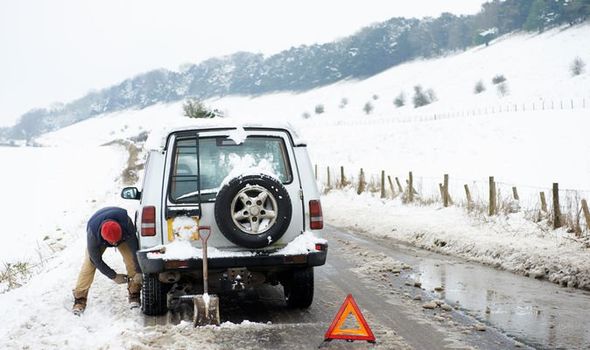 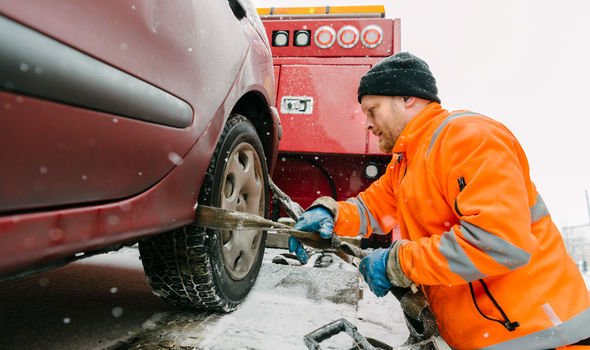 However, the data did reveal a massive 64 percent of motorists did keep a spare tyre in their vehicle to become the most popular item found in the nation’s cars.

A de-icer scraper or spray came in at second place with 63 percent admitting to having one in case of a winter freeze.

Aleks Corr, Motor Insurance specialist at NFU Mutual said: “While brollies might be among the essentials for daily British life, don’t forget the safety fundamentals such as a torch, blanket and a spare tyre to prepare for a breakdown.

“Keeping basic safety equipment in your car could spell the difference between a minor inconvenience and a traumatically freezing and potentially hazardous family event.”

A massive 78 percent of car owners say they have breakdown cover for their vehicles in case of an emergency.

Aleks Corr urged motorists to write down their breakdown providers number on a piece of paper and keep this in the car for emergencies.

Just 43 percent of road users say they have done this and the scrap piece of paper could become life-saving could if you cannot find a good phone signal or internet coverage on your mobile phone.

In other dramatic discoveries, NFU Mutual found three-quarters of road users don’t know what to do if their vehicle overheats despite simple fixes potentially being able to save a car.

Just one-third of road users understand the meaning of motorway arrows leading to an SOS phone as half are confused at what a red warning triangle is used for.

What are the most common causes of winter breakdown?

According to the RAC, tyre problems are the most common cause of breakdown problems across the UK.

However, Britons are not prepared to deal with these simple issues as 36 percent revealed they did not have a spare tyre in their vehicle as half don’t know how to even change one.

Other common causes of winter breakdown are issues with engine management, getting involved in road traffic accidents and punctures. 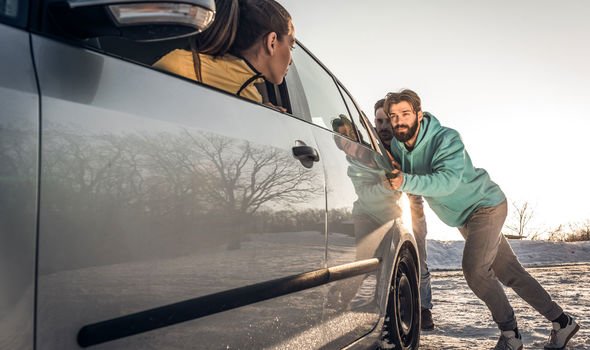 How to avoid a winter breakdown

Following the research, RAC experts revealed how motorists can dramatically reduce the chance of breaking down this winter.

RAC urges road users to check they have enough fuel for a journey. This may sound easy but motorists are reminded vehicles use more fuel by regularly stopping and starting.

The winter months and cold weather are likely to see more people opting for their cars instead of walking or cycling and this could cause roads to become more congested.

The RAC also urged motorists to check basic car functions such as their oil, coolant and screenwash are all refreshed to tackle the colder conditions.

Tyres are one of the most imports pars if a vehicle and these should be checked regularly to make sure they are above the minimum 1.6mm tread depth.