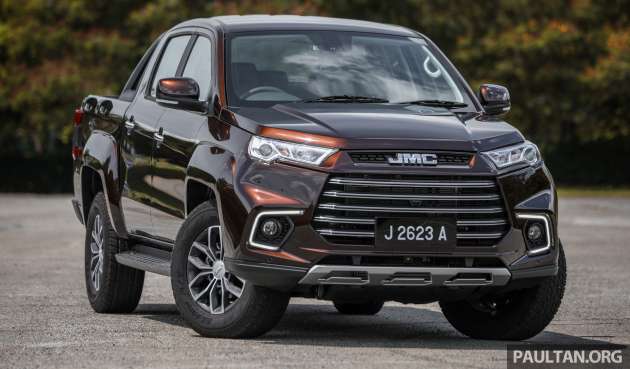 Sometimes, it’s nice to be surprised. Allow us to preface this review with a brief trip back to our maiden experience with a China-made pick-up truck, the GWM Wingle 5. In short, it was abysmal. Ride was rough and the powertrain felt painfully lethargic, but it was dirt cheap, with prices starting from RM70k.

The Wingle 5 set the bar incredibly low for a twin-cab China pick-up truck, so when Angka-Tan Motor (ATM) announced that it was venturing into the commercial pick-up scene in Malaysia with the JMC Vigus Pro, no one really bat an eye.

Initial public response wasn’t great, too, with chief concerns being its relatively high RM98,888 asking price, and the hasty dismissal of the JMC brand being an unimaginative attempt at copying GMC. It’s short for Jiangling Motors Corporation, by the way, and its core business has traditionally been manufacturing light duty trucks.

Is it actually value for money?

Sliding in at just below the six-figure mark, the Vigus Pro is currently the most affordable twin-cab 4×4 pick-up truck with an automatic transmission in the country. The closest mainstream rival would be the Ford Ranger 2.2 XL (AT) at RM103,888, followed by the Mitsubishi Triton VGT (AT) at RM105,990. Cheaper alternatives would either be bare-specced single cab models, or twin-cabs with a manual transmission.

So far, only one variant of the Vigus Pro is available. Early adopters will be given a complimentary set of 17-inch dual-tone wheels wrapped with all-terrain tyres (as seen on our Steady Brown tester) – the standard model rides on 16-inch hoops with regular road tyres.

But on the value front, the Vigus Pro isn’t an immediate catch. It’s missing things like LED headlights, keyless entry with push-start system, and LED combination tail lights. Plus, the tailgate isn’t assisted, and the supporting hinges look like they came straight off Mr DIY.

Either one of these would boost its appeal, but you could argue that a workhorse can do without. Take a look at the Maxus T60, for example. It comes with 19-inch wheels, has LED projector headlights with auto high beam, stainless steel sports bar (fibreglass on the Vigus Pro), keyless entry with push-start ignition, black leather upholstery, powered seats, and a 10-inch infotainment system with Android Auto and Apple CarPlay support as standard. Now that’s how new players should be specced.

So, is there anything to shout about? 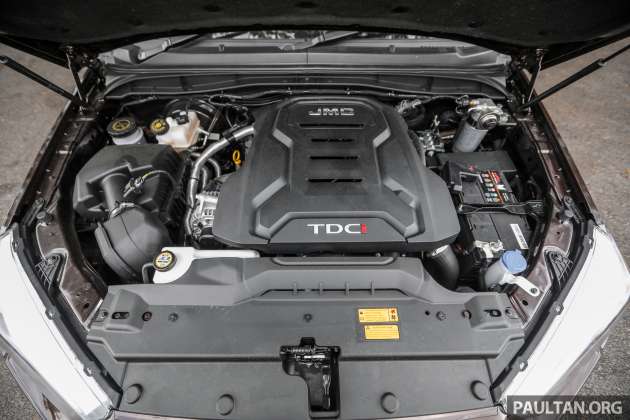 As a matter of fact, yes. If you intend to get a pure twin-cab workhorse and can’t care less about the fancy amenities, the JMC should suffice. Under the bonnet lies the trusty 2.0 litre four-cylinder turbodiesel engine sourced from Ford.

For the everyday drive, the engine is sufficiently torquey and responsive at low to medium loads. It pulls strongly and has enough in reserve to easily sustain cruising speeds, plus it’s surprisingly refined as well. Almost as good as its Japanese rivals, if not better. 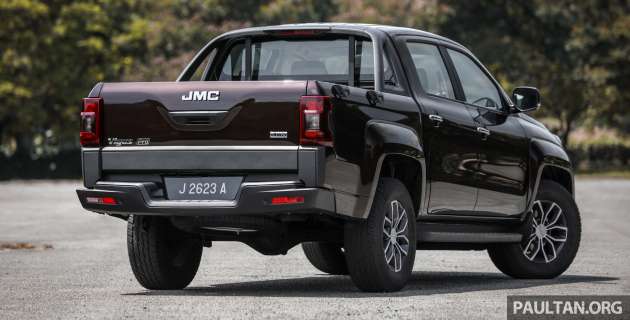 The eight-speed ZF automatic transmission (with an electronic shifter!) is an excellent pairing for the engine, providing silky smooth gearshifts, though oddly gaggy in the first two gears. Upwards of gear three, the ZF is as smooth as expected, with perfect ratios that are geared for everyday use. The turn of speed is commendably brisk, too, which is a nice surprise.

The part-time four-wheel drive system (supplied by BorgWarner) can be switched on the fly, but this is capped at 40 km/h for the low range 4L mode. JMC used Bosch’s Electronic Stability Programme (ESP) module and an Eaton fully-lockable differential for maximum claw off-road, and the Vigus Pro also comes with hill descent control (below 8 km/h), handy for casual off-roaders.

What about ride and handling?

A lot better than expected, honestly. Damping qualities are close to matching the 2018-2019 model Hilux – firm, but not overly rigid like the Wingle 5. It doesn’t feel like it rides on a primitive platform, and it’s rather poised at speed. It’s not too crashy over poor road surfaces, nor too floaty while cruising. Just steady.

The steering (hydraulic), however, is atrociously vague. There’s nothing in the way of feedback, so gauging grip levels by feel is out the window. Even the steering ratio feels iffy and poorly calibrated. Thankfully, this is the Vigus Pro’s worst trait in the driving department, so if this is unacceptable to you, then look elsewhere.

Compared to its peers, the Vigus Pro has a shorter-than-average cargo bed, and payload is only 850 kg. We don’t imagine this to be a problem for casual users, but professionals, take note. ATM will be introducing accessories such as a canopy, roller shutter and tie-down straps in the near future as well.

Are there any other compromises? 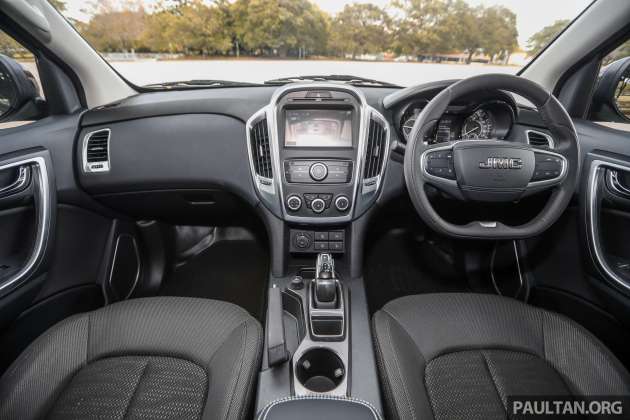 As mentioned above, the interior is void of the good stuff. The nicest features you get would be the sporty leather-wrapped two-spoke steering with shift paddles, the electronic gear shifter, a soft-opening glove box, and side mirror heaters. Yeah, we really tried.

The entire floor is covered with vinyl (great for cleaning, but looks and feels cheap), and there’s ample use of hard plastics. Fit and finish on the CKD truck is pretty good all around, though there is a slight metallic reverb when closing the doors. Also, curiously, the driver side is missing the grab handle on the A-pillar, and there are no vanity lights and mirrors to be found.

The infotainment system is also a major letdown. The display has a milky finish that can potentially impede clarity, but then again, it’s a low resolution unit with basic functionalities. There’s Bluetooth, at least, and a dreadfully slow USB-A charging port. A four-speaker sound system is standard, but they sound about as good as those mono speakers installed in malls and car parks.

More thought could be put into the storage spaces, though. In its current guise, there’s only a single cubby hole along the centre console, and the stowage bin within the centre armrest is too narrow and shallow. Fortunately, the glove box and door pockets are decently sized, and both front seats come with organisers at the back.

The rear quarters are… functional. There are no rear air vents or charging ports, and it’s also missing the rear defogger. Rear passenger seating is a bit more upright as well, which may induce fatigue on longer journeys. Well, at least you get three three-point seat belts and usable door pockets, plus the seats can be flipped up or down to create more loading space. The hydraulic jack and other tools are underneath the bench.

In terms of safety features, it’s dismal. The Vigus Pro is probably a decade behind, shipping with the bare minimum of two frontal airbags, ABS with EBD, as well as front and rear parking sensors. 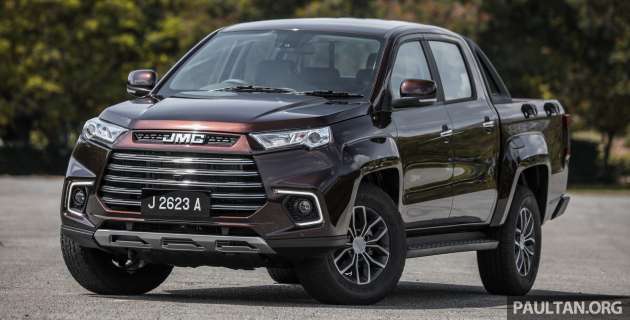 As pick-up trucks go, the JMC Vigus Pro leans more on the side of utility than lifestyle, despite being competent in areas pertaining to ride quality and propulsion characteristics. Refinement is also above average, and expect this to be slightly better with the 16 inchers and regular road tyre combo.

The kit list leaves much to be desired, but those looking for a mechanically polished pick-up truck below RM100,000 can give the Vigus Pro a real consideration. We’re not fans of the basic cabin appointments, but objectively, as a package, it is a decent alternative workhorse.

For those interested, ATM is offering two complimentary options to go with your purchase. Option A is a free accessories package worth RM9,350, which comprises V-Kool security film, leather seat covers, a dashcam recorder, and bed liner. Option B is a cash rebate of RM2,000 and free bed liner worth RM1,000. The beauty is that you get to pick, but this could be a limited time offer.

Speaking of choices, there are just four exterior colours available – Solid White, Brilliant Silver, Glossy Black, and Steady Brown. A three-year or 100,000 km warranty (whichever comes first) is standard, which is the bare minimum in the segment. Let’s just hope ATM will introduce the full-spec model in the future…