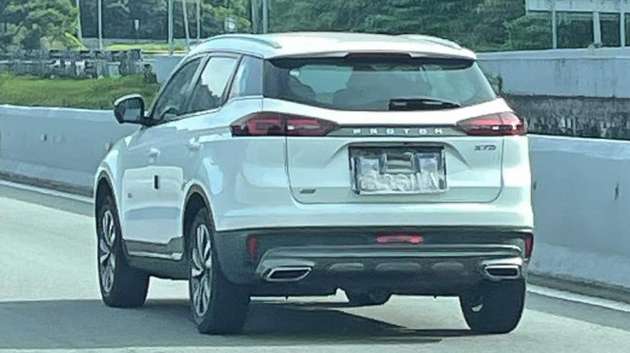 The 2022 Proton X70 appears to have been sighted on the Karak Expressway heading in the direction of Genting Sempah in Pahang on Instagram, and the eagle-eyed will have spotted the ‘AWD’ badge on this particular unit’s tailgate denoting the return of the all-wheel-driven variant to the X70 line.

The AWD version of Proton’s C-segment SUV arrived with the debut of the X70 back at the end of 2018, when it offered with the Executive trim level. This variant was dropped with the launch of the X70 facelift in February 2020 as demand was insufficient, though it now appears that the 2022 model year will see its return, as suggested by its 18-inch machine-finished alloy wheels.

The upcoming revision for the Proton X70 also sets the scene for the local market launch of the C-segment model with the 1.5 litre turbocharged three-cylinder engine, a combination that has gone on sale in Pakistan.

This is the powertrain that is found in the top X50 1.5 TGDi Flagship variant, in which it produces 177 PS and 255 Nm of torque, sent to a seven-speed dual-clutch transmission. By contrast, the X70 CKD for Malaysia employs a 1.8 litre turbocharged, direct-injection four-cylinder petrol with 181 hp and 300 Nm, paired with a Volvo/Geely-developed seven-speed dual-clutch automatic.

Here, the trade plate-wearing X70 outwardly appears identical to the current X70 CKD Executive variant, save for the aforementioned AWD badge on its tailgate.

What the Executive variant missed out on, relative to the range-topping Premium, is the advanced driver assistance system (ADAS), and while the return of the AWD presents Proton with the opportunity to roll out a variant with a different powertrain, the more detailed list of equipment for the forthcoming update remains to be seen.

With the upcoming update for the Proton X70, what other equipment would you like to see in this revision?