The new Hyundai Tucson N Line falls short of being a full-fat N car, but will cater to buyers wanting a sportier look 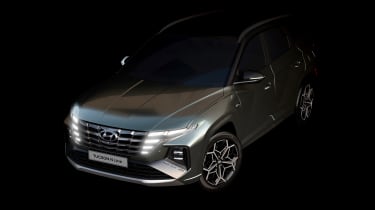 This is our first look at the new Hyundai Tucson N Line. It features a range of cosmetic tweaks inspired by the Korean brand’s N Performance models. It’ll go on sale early next year, sitting towards the top of the SUV’s range and acting as an alternative to other sports-inspired SUVs such as the Volkswagen Tiguan R-Line and Ford Kuga ST-Line.

We’re still waiting for the car to be revealed in full, but a handful of teaser images hint at its styling. To give it an N-division makeover, Hyundai’s designers have fitted new multi-spoke diamond cut alloy wheels, an updated front bumper, a more aggressive appearing rear diffuser and body-coloured side cladding with fresh vents behind the front wheelarches.

Hyundai hasn’t yet issued any images of the new Tucson N Line’s cabin – but, like the rest of the company’s N Line models, there’ll likely be a new pair of sports seats, a fresh sports steering wheel and an aluminium pedal box. The standard car’s pair of 10.25-inch screens will also be transferred into this new model.

The Tucson N Line’s chassis setup and engine range is unlikely to change over the standard SUV. So, buyers will still have their choice of five turbocharged 1.6-litre four-cylinder petrol engines, each with different levels of electrification. 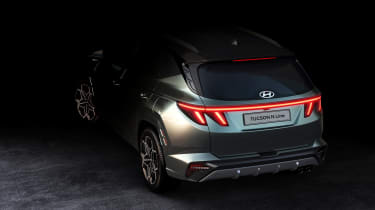 The entry-level model will be shipped without any electrical assistance. It’ll have an output of 148bhp – and will be mated to a six-speed manual gearbox as standard. Like the standard model, buyers should also have their choice of either front or four-wheel drive.

Above that, there’ll be a pair of 48-volt mild-hybrids, offering outputs of either 148bhp or 178bhp. Both will be available with Hyundai’s new six-speed Intelligent Manual Transmission – which is a conventional manual gearbox with an electronically operated clutch – or a seven-speed dual-clutch automatic.

The same engine will also be offered with full-hybrid assistance – which blends the 1.6-litre petrol unit with a 59bhp electric motor and a 1.49kWh battery pack for a combined output of 227bhp and 350Nm of torque. Finally, a plug-in hybrid version of the same system, with a larger capacity battery pack and improved electrical architecture, will arrive later in 2021.

Prices and a full specification for the new Tucson N Line will be unveiled closer to the car’s launch date – but, given the standard Tucson is expected to start from around £25,000, this more generously equipped variant could carry a starting price of around £28,000.

What are the best crossovers on sale right now? Click here for our list of the top 10..