Home » Car Reviews » Stalled cement lorry adds to morning KL rush-hour woes – it shouldn't have been on the road at the time – paultan.org Stalled cement lorry adds to morning KL rush-hour woes – it shouldn't have been on the road at the time – paultan.org 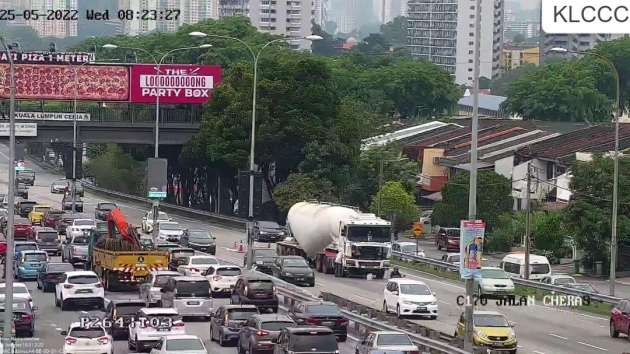 Recalcitrant heavy lorry drivers are still flouting the law, despite the law being very clear that such slow moving vehicles are not allowed on Kuala Lumpur city roads during peak traffic hours. This has been on the books since 1995, but there is still a segment of heavy vehicle drivers who put profit above inconveniencing other road users.

Case in point – a cement lorry that broke down during morning rush hour traffic earlier today on the East-West Link expressway at Taman Connaught, heading towards Taman Len Seng. In a tweet by Integrated Transport Information System (ITIS), an image shows the stalled vehicle – which should not have been on city roads at the time – blocking both the left and centre lanes of the highway, effectively creating additional congestion due to its presence.

In case anyone isn’t clear about it, heavy vehicles with an unladen weight (Berat Tanpa Muatan or BTM) of more than 10,000 kg are forbidden to use highways between the hours of 6am and 9.30am, and between 4pm to 6pm daily, except on Sundays and public holidays. This is covered under the Road Transport (Slow Moving Vehicles) (Prohibition of Use on Road) (City of Kuala Lumpur) (Amendment) Order 1995, listed in government gazette P.U.(A) 409.

The order, issued by the mayor of Kuala Lumpur under authority of subsection 70 (1) of the Road Transport Act 1987, covers all roads within the city centre including main arterial roads leading to the city centre. City centre is defined as the area bounded by Jalan Tun Razak, Jalan Yew, Jalan Sungai Besi, Jalan Lapangan Terbang Lama, Jalan Istana and the Mahameru highway while main arterial roads includes the likes of Jalan Ampang, Jalan Kuching, Jalqn Tun Razak, Jalan Sentul, Jalan Bangsar, among others.

Additionally, the NKVE stretch between Shah Alam and Jalan Duta, the PLUS highway between between Sungai Buloh and Bukit Lanjan and the Federal Highway 2 between Subang and Sungai Rasah are also off limits to heavy vehicles during the stated hours. The restriction also applies to Class 2 and 3 vehicles carrying a load of 10 tonnes as well as vehicles defined as “slow moving,” including excavators and bulldozers.

Authorities have of course been clamping down on such activities, but there are enough opportunists who don’t care what the law says. Indeed, as the broken down cement mixer shows, it has again become rampant of late – we’re sure many of you on the road each morning have noticed heavy vehicles around you.

Heavier enforcement of the rule is surely necessary – it’s bad enough that traffic is as heavy as it is in the mornings, and surely no one needs heavy vehicles adding to that. What are your thoughts on this? Share them in the comments section.