In what can only be described as a titanic effort, Team GTPlanet x Hooncorp finished the 2019 24 Hours Of Lemons New Zealand! Not only that, but we finished 22nd despite starting dead last, suffering a high speed crash, and battling some much faster cars.

The team, made up entirely of GTPlanet members and racing with GTPlanet backing, showed promise early on in the weekend. Everyone got a feel for the Pulsar very quickly and displayed good pace in practice. Lap times were consistently quick, but at the same time the car was looked after. Considering that most of the drivers had never even driven at Hampton Downs before, this was quite a feat!

Starting At The Bottom

We opted to start dead last, as in previous races this has proven to keep us out of the chaos of the early hours. So we started all the way back in 57th. GT Academy finalist Louie De Manila started the race, and immediately moved up the ranks. Some teams lasted only a handful of laps before breaking, crashing or otherwise retiring, and before we knew it we were 44th. 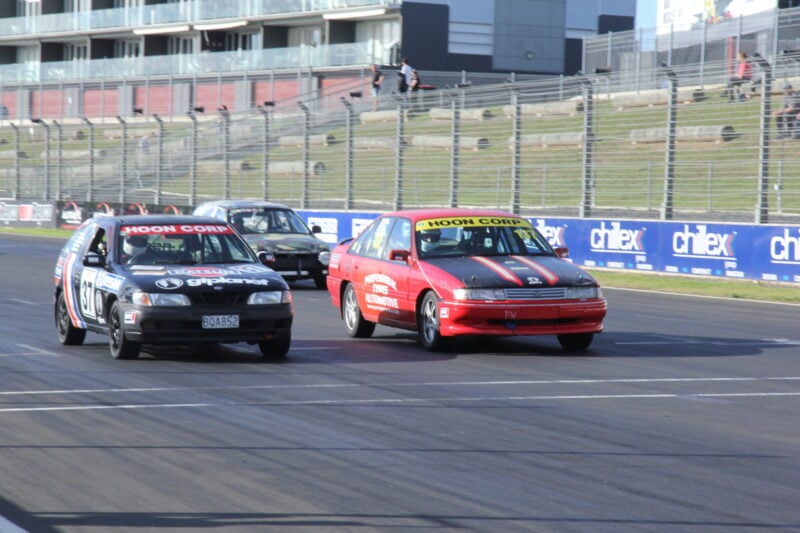 Louie’s radio unplugged itself towards the end of his stint, but this wasn’t a major issue. After an hour, Daniel took over. By now the Pulsar was 29th. The rise to the top only continued as I hopped in and during my time in the car, the sun began to set. Within the hour, the track had gone from totally day time to nearly pitch black.

With the track now dark, Cameron got in for his first stint of the race. The Pulsar sat in a comfortable 23rd. Meanwhile Hooncorp’s second team, running the #137 Commodore, suffered a collision that cost it valuable track time and knocked the team back to 44th.

Back in the Pulsar, Cameron broke into the top 20 in the closing stages of his first drive.

By 7pm, the race leader had clocked 166 laps. Karl hopped in to finish off the first stints of the race, and thanks to a string of incidents by various teams, most of his track time was under safety car. While a bit stink for Karl, after an hour we elected to capitalize on the reduced pace and smash out a spanner check on the Pulsar as well as a driver swap. Pads were checked, tire pressures were adjusted and everything was glanced over. Louie headed back out in 26th — we lost a bit of time but had the peace of mind that everything was still running smoothly.

The little Pulsar slowly but surely kept making moves on the other cars, and by 1am we had moved up to 14th. It looked like our top 10 goal was within reach, but despite getting oh-so-close, we suffered a major setback.

Daniel found himself both surrounded by traffic and brake checked by the car ahead (which was also being brake checked by the car ahead), and consequently he crashed hard into the car in front. He brought it straight into the pits where initially, the damage didn’t seem too bad given the speed of the hit. Hey, the headlights were still fully intact and pointing the right direction — that’s a win for us!

However we noticed the radiator had taken a knock, and it was revealed to be pretty terminal. We lost an hour in the garage replacing it, and once repairs were finished, a few test laps ensured everything was fighting fit once more and we were back underway. 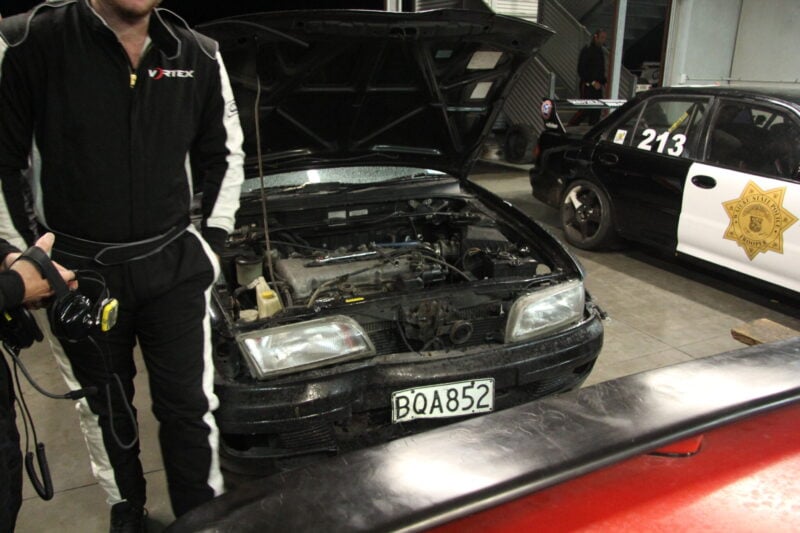 The time in the garage had cost us dearly, knocking us back to 37th. Rain passed by occasionally, though only enough to grease the track, not necessarily wet it. This suited us, as the Pulsar tends to do quite well in the wet and slippery conditions. Because the field was much more spread out by this point, progress was slower.

The race was red flagged at around 6:30am. Morning fog had rolled in and engulfed the track, and it was too thick to continue. This meant we had an hour to fuel up, spanner check the car once more, make some minor adjustments, and most importantly, score some much needed sleep. The red flag couldn’t have been timed better too, as the Pulsar was just about due for a brake pad change. 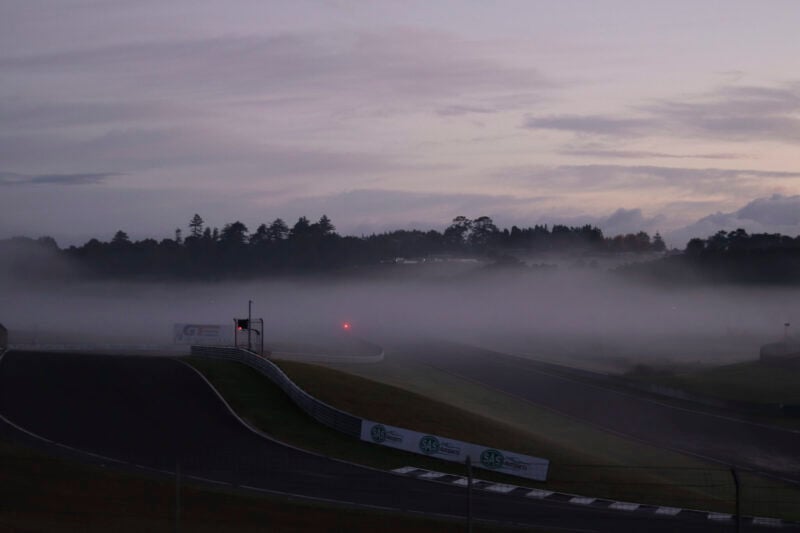 Things got back underway just under an hour later, as the sun was rising. Conditions were perfect: barely a grey cloud in the sky and warm — but not hot. Within a few hours the Pulsar had fought its way back into the top 30. We were 29th, and the next few cars were only a handful of laps ahead.

The Commodore meanwhile had suffered a terminal engine failure. Since it was so close to the end of the race it was deemed not worth doing a motor swap, and was thus retired.

At midday we filled up with our second-to-last tank of gas. We changed the front tires too: they’d taken a fair beating over the course of the race. With no shortage of spares we figured we may as well use the fresh rubber! The gearbox was starting to feel a bit loose and funny, but with enough careful driving it was manageable. As always, the Pulsar kept a consistent pace and made up ground on the other teams simply by staying out of trouble. 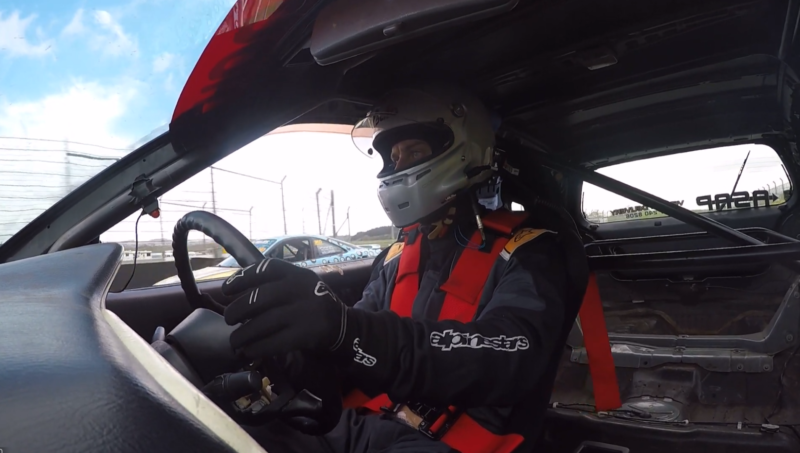 The last stint was one of the most chaotic. Right as I got back behind the wheel, the clouds rolled in and torrential rain changed the course of the race entirely. The sudden downpour caught many teams off guard. Consequently cars spun, pitted in for tires, and generally slowed down. But not us! With the fresh front tires, plenty of gas and the experience gained from last year’s very wet race, the Pulsar began overtaking much faster rivals with ease, and making some serious ground.

Then, after everything we’d been through, it all came to an end. The checkered flag came out and we had done it. We had survived the 24 Hours Of Lemons! The surviving teams returned to the pits greeted with applause, cheers and the feeling of accomplishment. 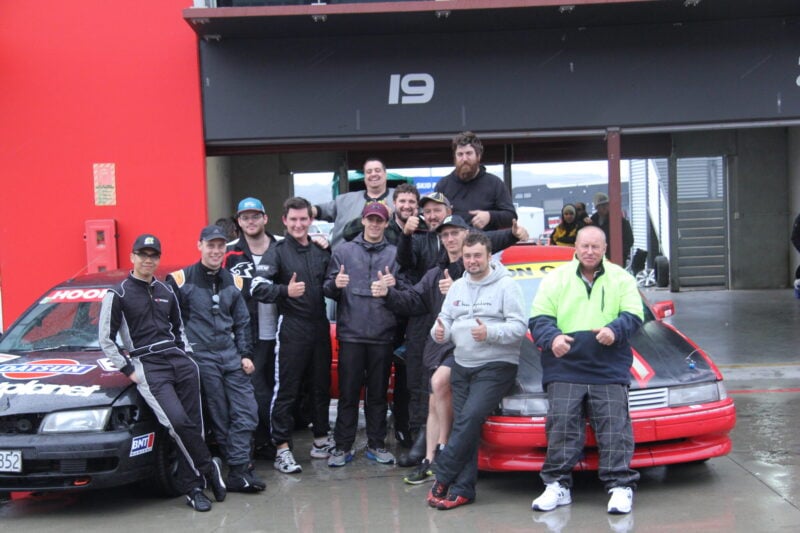 The end of race numbers were record breaking. The winning car, Team Willies in a DC2 Honda Integra, completed 811 laps. This broke the record for longest distance traveled at Hampton Downs in a 24 hour period. All those laps translate into a total distance of 2,192km (1,362 miles). With a grand total of 298 drivers across all teams, Lemons also officially hosted the biggest field ever assembled at a motor sports event in New Zealand history!

So how did the Pulsar stack up?

Initially Team GTPlanet x Hooncorp was classified as 24th. However one of the cars that had been put at the front on the time sheets was in fact the safety car. Also we were further promoted when a car ahead of us actually failed to cross the finish line, so we ended up 22nd. The Pulsar had completed 683 laps, meaning it traveled 1,837km (1141 miles).

Of course this wouldn’t have been possible without numerous sponsors and supporters: BNT Manukau, Gibbs’ Signs, ASAP Vehicle Delivery, Pit Stop, and Professional Tires And Automotive. Big thanks to these businesses for doing various bits and pieces on the cars, getting them all race-ready!

And of course to those who have been following our adventures in the Hooncorp Thread, a big thank you for your support and engagement! We’d like to think the GTPlanet x Hooncorp team idea was a success, so who knows? We may do it again in 2020…