The CERV II Was Supposed to Be GM's Ford GT40 Fighter

If a mid-engine Corvette seems a revolutionary idea in 2019, imagine how the car that would become the CERV II prototype must have seemed in the early 1960s. By then, it had become abundantly clear to Belgian-born General Motors engineer Zora Arkus-Duntov that the future of serious performance sports and racing cars was rooted in mid-engine chassis architecture. Arkus-Duntov, a man known now as the “Father of the Corvette,” had been hired at GM in 1953 just after Chevrolet had launched its new Corvette sports car, and by 1955 he was the brand’s high-performance director, bringing V-8 power to the two-seat roadster for the first time.  A handful of years later, in 1960, he had developed CERV I, the first Chevrolet Engineering Research Vehicle that, like a growing number of contemporary race cars, had its engine mounted behind the driver but ahead of the rear wheels. Indeed, the 1960s were really the decade of the mid-engine revolution. In Formula 1 racing, constructors had found that mid-engine designs had numerous advantages not just in weight distribution and balance, but also in aerodynamics. Without an engine up front, the nose of the car could be smaller, lower and more streamlined, needing less power to push through the air. It was a change that would also come to Indy cars, and an Indy car is what CERV I most represented with its open-wheel, single-seat design. While CERV I served a research purpose, it was never raced due to an American automaker agreement to not field factory motorsports efforts.

Cue CERV II, which Arkus-Duntov began developing late in 1961 under the name G.S.2/3. The engine—a lightweight, all-aluminum 377-cubic-inch V-8—had already been ironed out in CERV I, except now Arkus-Duntov wanted its 500 horsepower channeled to all four wheels in the G.S.2/3, having been inspired by the 1935 Bugatti T53 race cars he had admired in his youth. Six cars were planned, with two-wheel-drive versions to be called G.S.2 and four-wheel-drive cars to be known as G.S.3 models. The all-wheel-drive system was unique, using the combination of a Powerglide torque converter and two-speed clutchless manual gearbox at both the front and rear of CERV II, joined together via driveshaft. 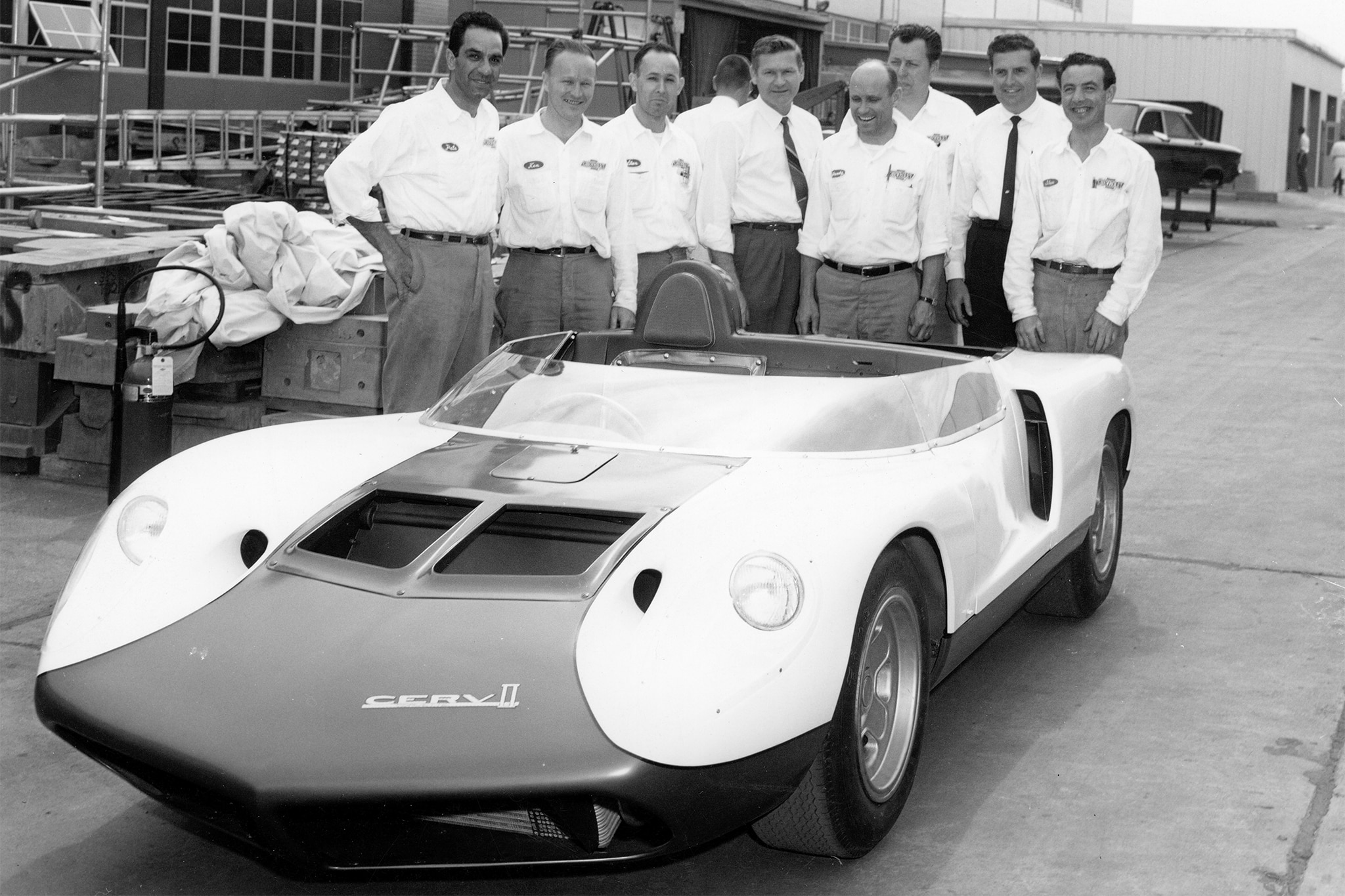 Designers Larry Shinoda and Tony Lapine (the latter would go on to design the Porsche 924 and 928) were responsible for creating a light fiberglass body which Arkus-Duntov mandated as a stressed chassis member. Curb weight was targeted at around 1,400 pounds, and many titanium components were incorporated to reach it. While the G.S.2/3 prototype was an open-roof car, testing revealed a closed coupe-style body would be advantageous and that’s what was planned for the actual production versions should they be made. Nevertheless, in testing, speeds of 212 mph were reached at Milford Proving Grounds by the spring of 1964. By then, Chevy manager Bunkie Knudsen was fairly sure he had a Ford GT40 competitor on his hands—a car capable of running with the best at tracks like Sebring and Le Mans. The car was debuted to the public at Formula 1’s U.S. Grand Prix in Riverside, California, where racers Dan Gurney and Stirling Moss ran demonstration laps. 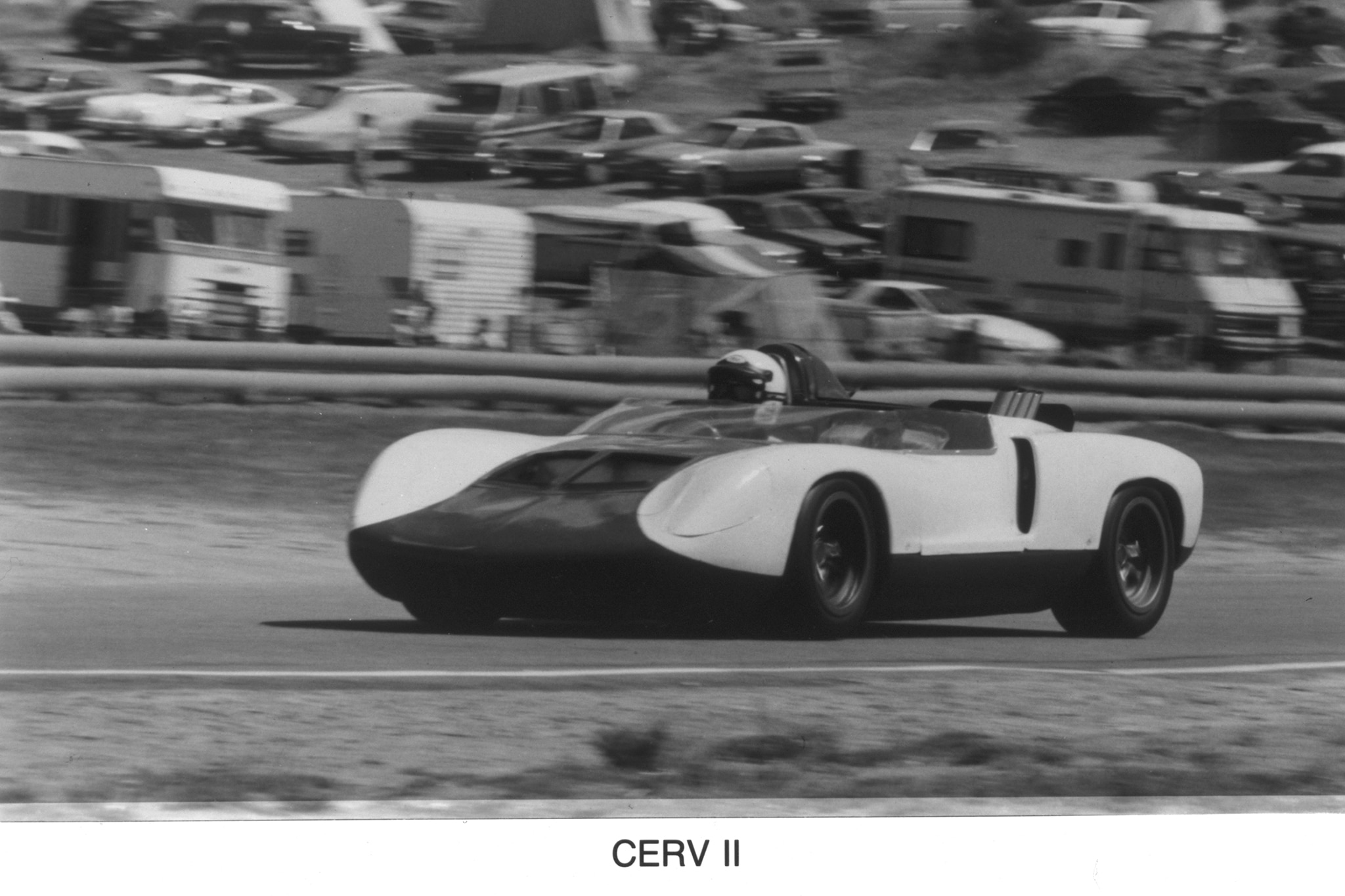 Sadly, in the same year GM management threw down the edict that the G.S.2/3 program would not be going racing after all and Arkus-Duntov transitioned the sole prototype to a future Corvette development mule, renaming it CERV II in the process. Indeed, CERV II would continue to log miles at Milford testing various innovations from the latest performance tires to aerodynamic concepts. By 1969, the car had racked up hundreds of laps and was fitted with Chevy’s new 427-cubic-inch V-8, an engine developed under the ZL1 moniker that Arkus-Duntov believed could produce as much as 700 horsepower . In the end, the CERV II would produce around 550 ponies with a curb weight of roughly 1,800 pounds.

In 1970, CERV II’s development was ended and the car was mothballed in a warehouse by GM. Four years later, it was moved to GM’s Design Staff Warehouse, along with a ZL1 engine, a pair of 377-cubic-inch engines, and many other CERV II spare parts. Later, the car was donated to late engineer and racer Briggs Cunningham’s museum in Southern California, then sold through the hands of three different private collectors before being offered at RM Sotheby’s New York auction in November 2013. There, it sold for $1,100,000—a big price to be sure, but also less than a relatively common Mercedes-Benz 300SL Roadster that sold at the same venue. Where will we see CERV II next? We can certainly see its influence, if nothing else, in the 2020 Corvette C8. 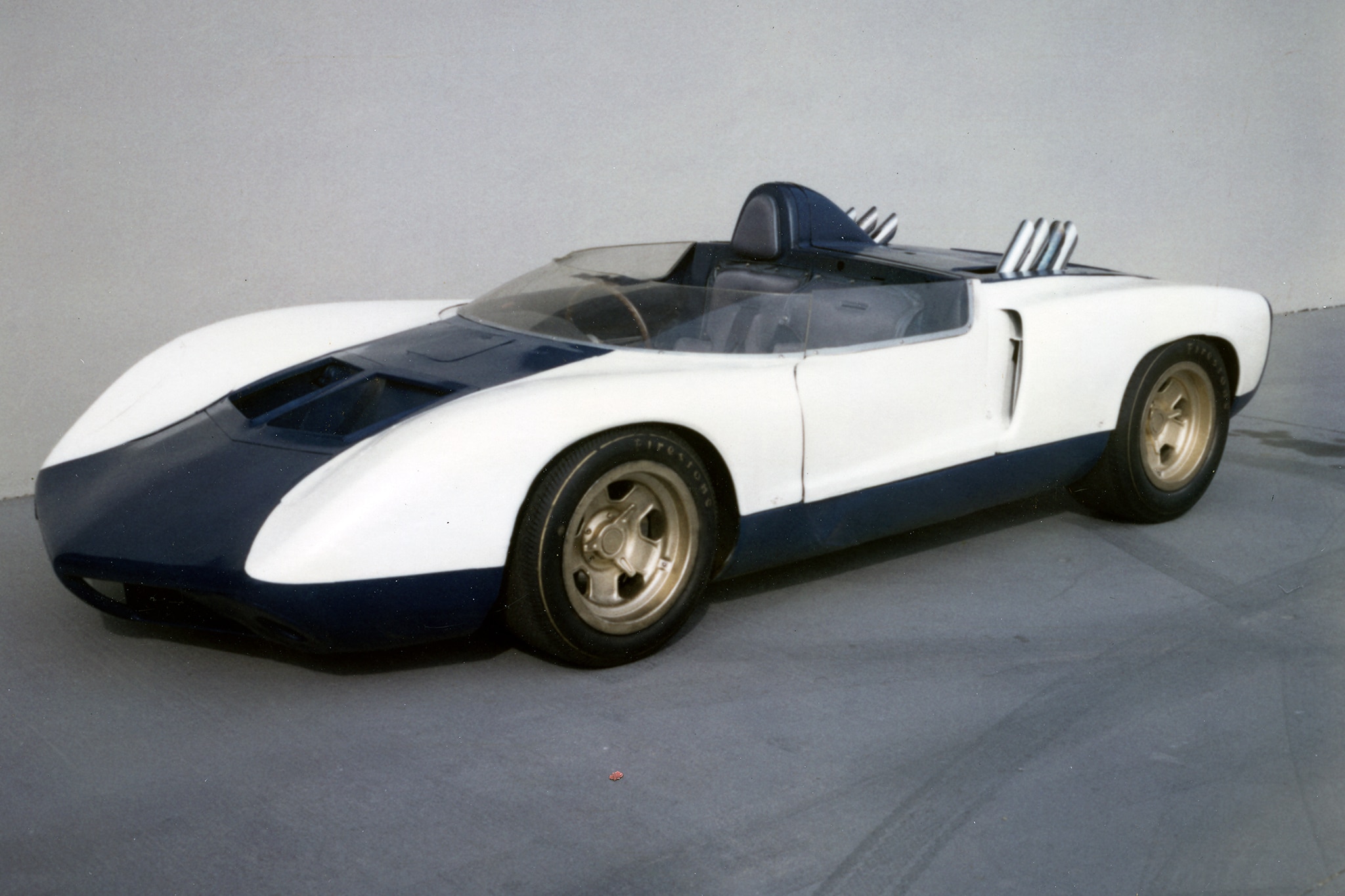 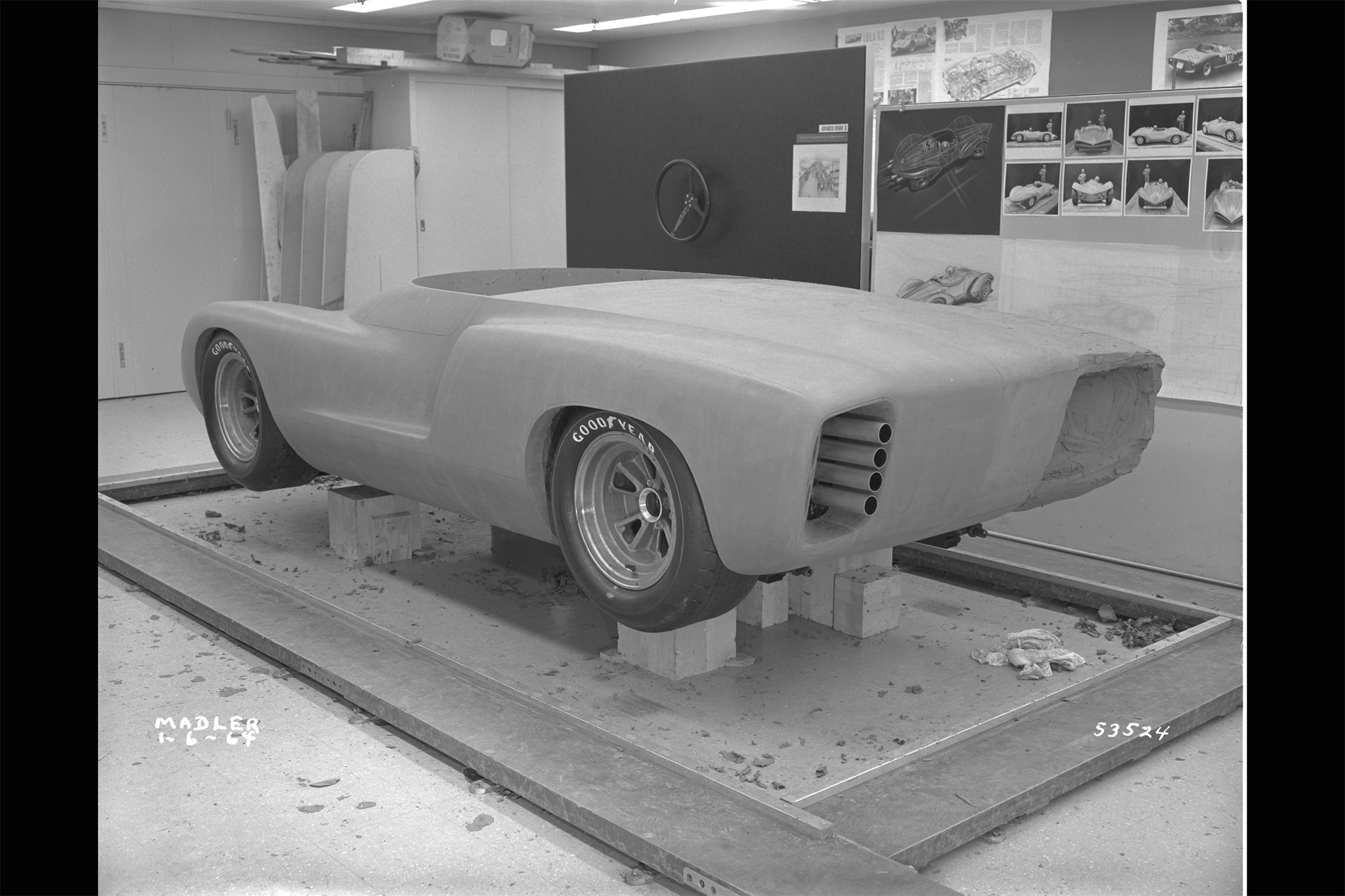 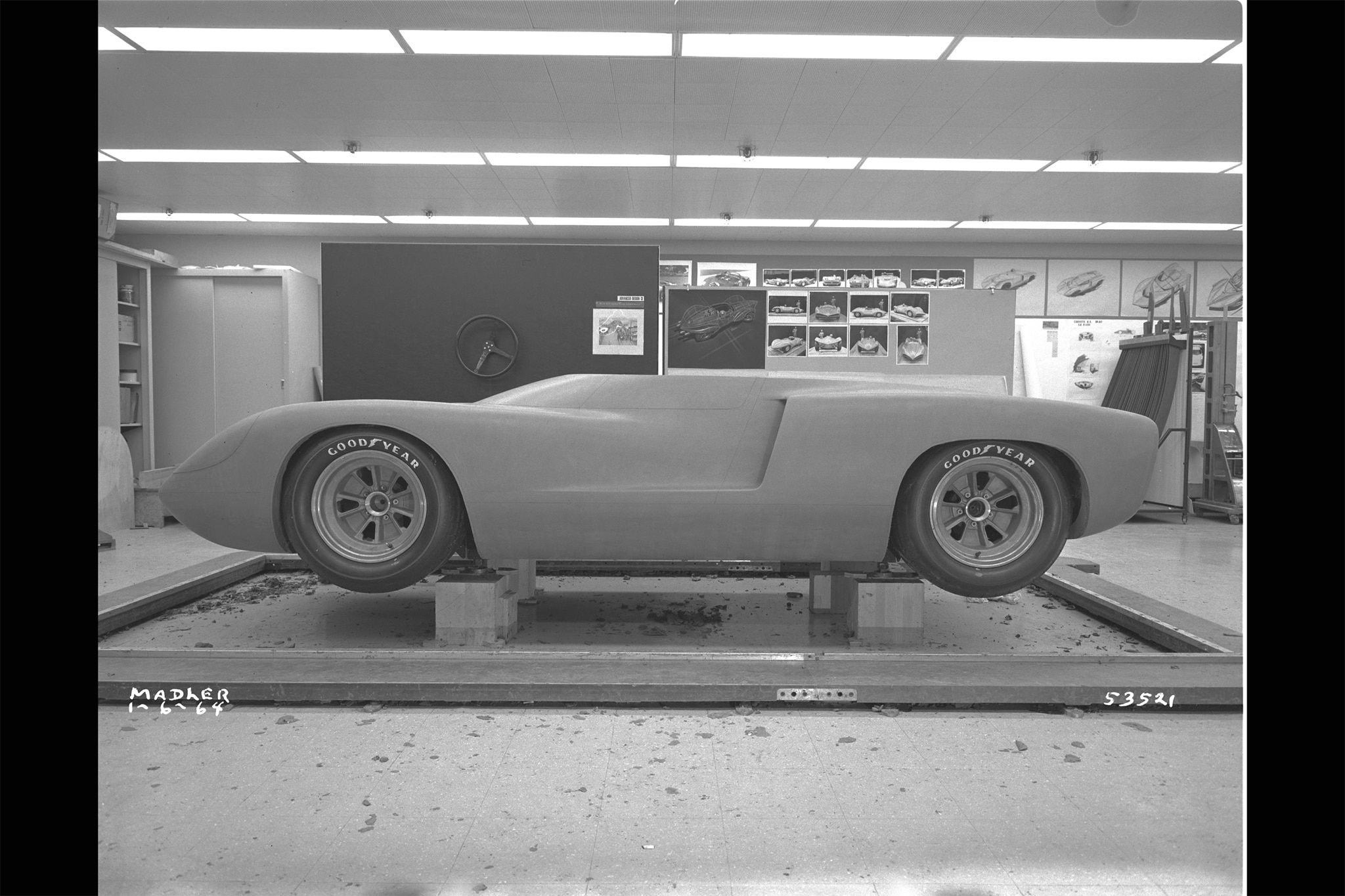 The Chevrolet Aerovette Was Supposed to Be the C4
Car Reviews