Since founding Arkonik a little more than a decade ago, CEO Andy Hayes has pursued a singular vision for his company: “Our mission has evolved over the last 12 years, but our founding principle has remained constant; to create the most authentic, restored Land Rover Defenders in the world.” That’s a business plan we can certainly get behind. This is about as close as you can get to ordering a factory fresh, classic Defender off the assembly line, albeit with several new school touches typical of similar resto-mod companies. I recently had the privilege of driving two Arkonik-ized Defenders, the 1992 D110 “Wessex” and the 1989 D110 “Yeti”, and I got to see firsthand what sets them apart from everyone else. 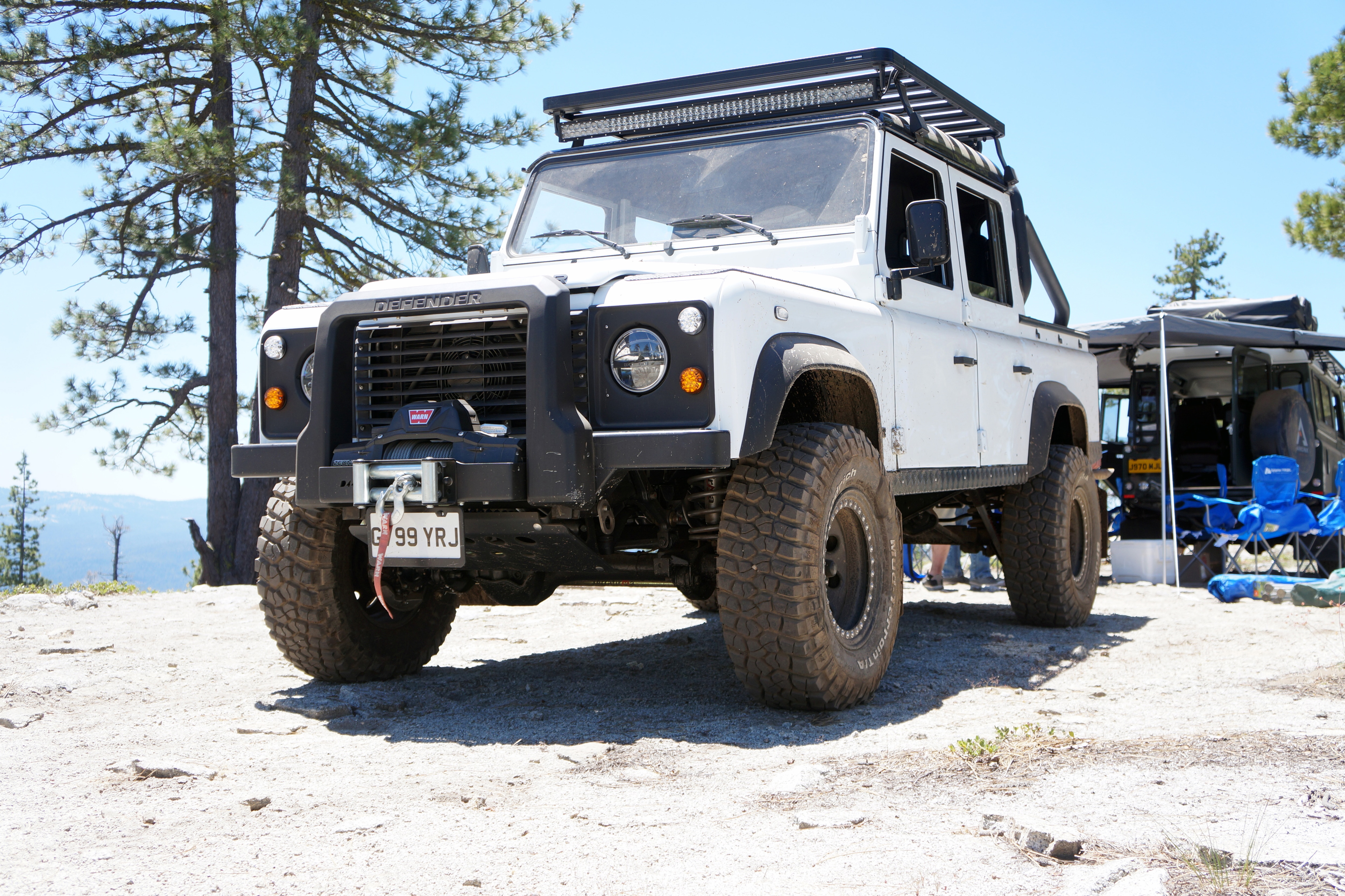 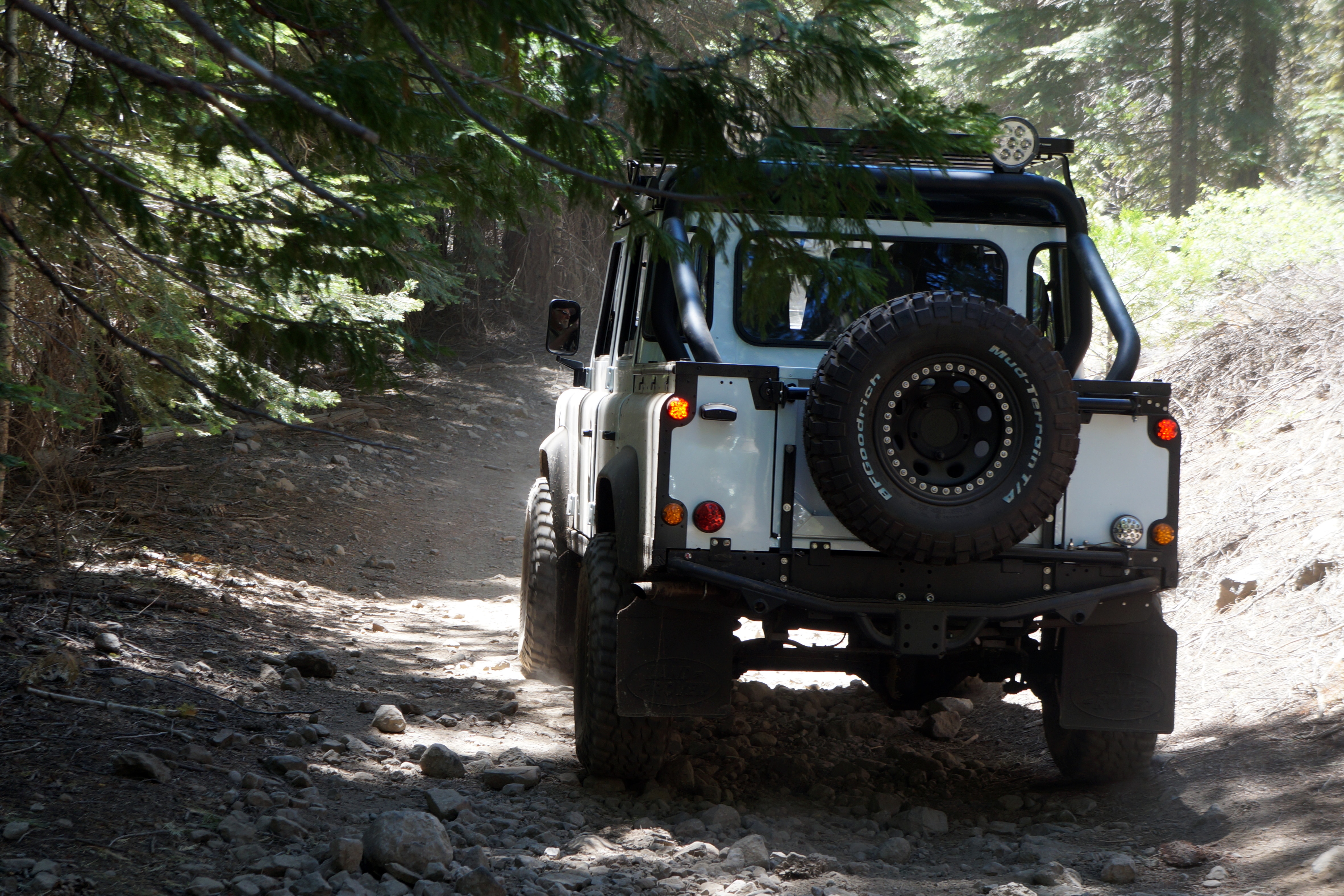 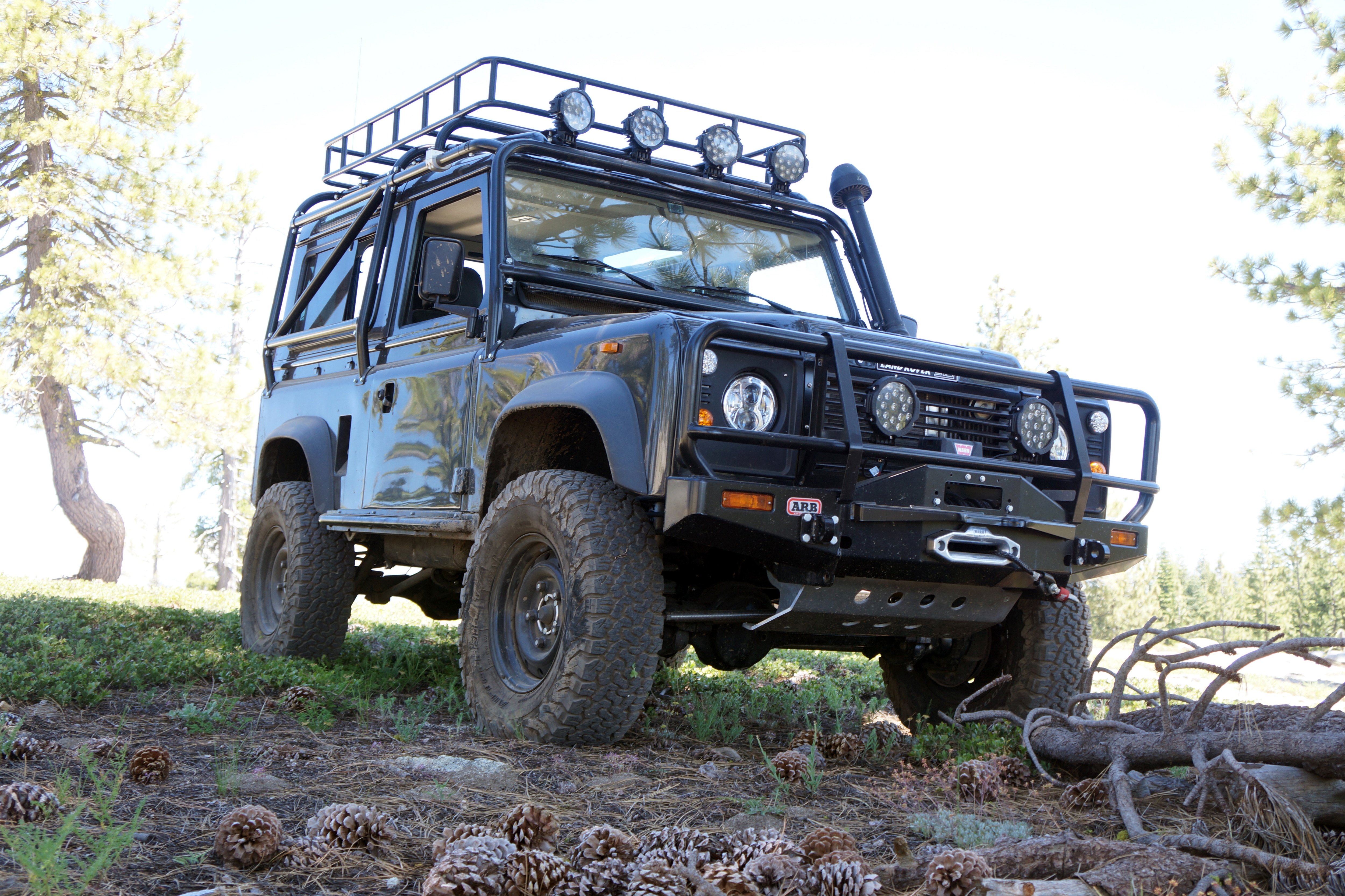 Accessories: Arkonik goes for the best money can buy with exterior add-ons such as Truck-Lite Twin-Cat LED lights and Warn Zeon 12-S winches just to name a couple. The vehicles also come outfitted with a variety of rims and tires depending on its suspension system. Restorations that hue more to stock Defender suspension setup such as the one featured on the D110 “Wessex” comes with Kahn Defend 1948 16-inch alloy wheels and BFGoodrich All-Terrain T/A KO2 tires. While a vehicle with a beefier aftermarket suspension system like the one underpinning the D110 Yeti comes with beefier Steel 16-inch wheels with beadlocks and BFGoodrich Mud-Terrain T/A KM3 tires.

Body: Defender body panels are hard to replace given their hand built nature so Arkonik has invested in its own tools in order to be able to perform custom fabrication. They painstakingly assemble new body pieces (save the roof and the windscreen panels) for every Defender they re-create, making sure that they are laser straight for the painting process.

Paint: Arkonik has improved upon Land Rover’s original corrosion protection, important for a vehicle that is expected to hold up through so many elements. Each panel is primed up to five times before a paint color is even chosen, then individually painted in one of Arkonik’s many available hues. This is more attention to cosmetics than any Land Rover ever got originally as the paint was considered an afterthought. Special attention is also given to the under-coating to make sure the undercarriage stays rust free and is protected from the elements during off-roading. All of the paint and bodywork is done in-house. 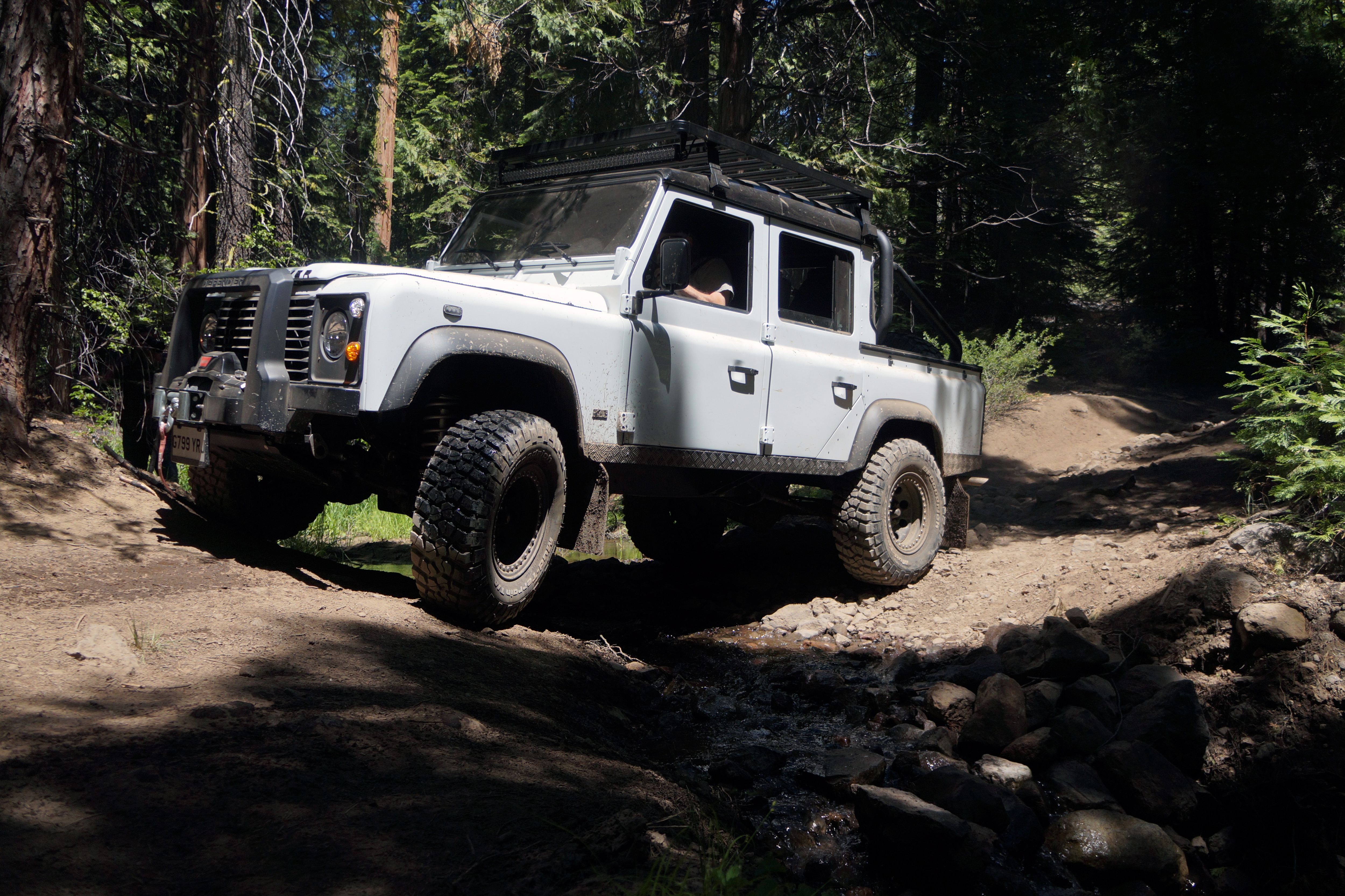 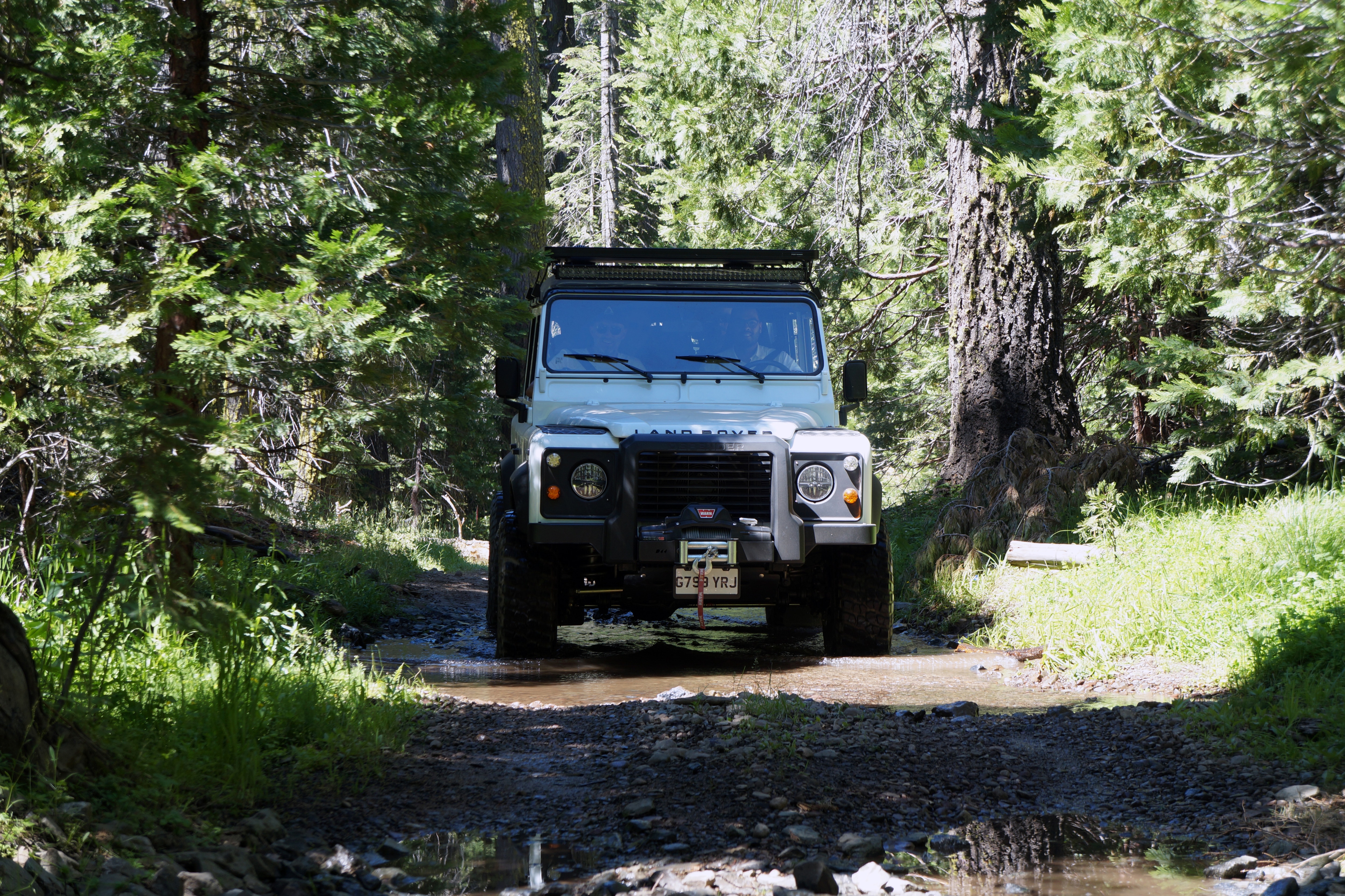 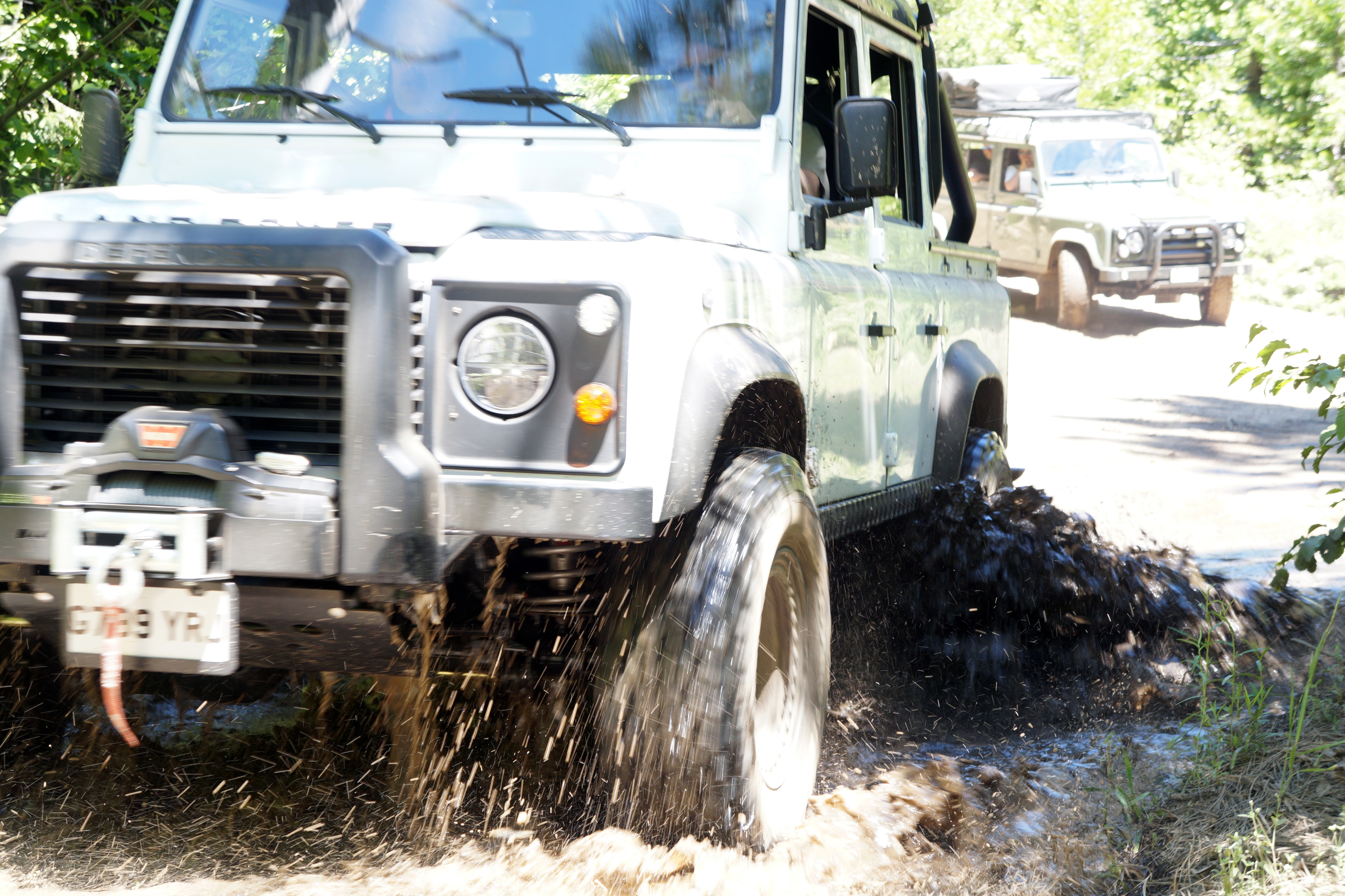 Arkonik is always there to steer (pun intended) customers in the right direction as far as the suspension needed for their intended use of the vehicle. Arkonik’s D110 “Yeti,” an earlier build, features stiffer Terrafirma suspension with a 2-inch lift kit, which is great for carrying a heavy 400-pound load off-road but hinders the drivability in any other sort of situation. Personally I found it uncomfortable, but it’s more of a hardcore setup. Later models such as the D110 “Wessex” feature a closer to stock suspension system that utilizes Arkonik’s standard upgrade called Cellular Dynamic suspension. This system uses cellular dynamic shock absorbers instead of the original oil filled type. Using a cellular foam insert instead of nitrogen gas or air helps prevent the oil from boiling while offering more heat dispersion. I could tell how much of a difference it made while driving the D110 “Wessex” because it was such a smooth and comfortable ride both off-road and on the highway. The D90 “Zenith” features a 2-inch lowered Extreme 4×4 suspension system with Twisted progressive suspension and Fox adjustable shocks in order to handle the power of the 430-hp 6.2-liter LS3 V-8 sourced from General Motors. 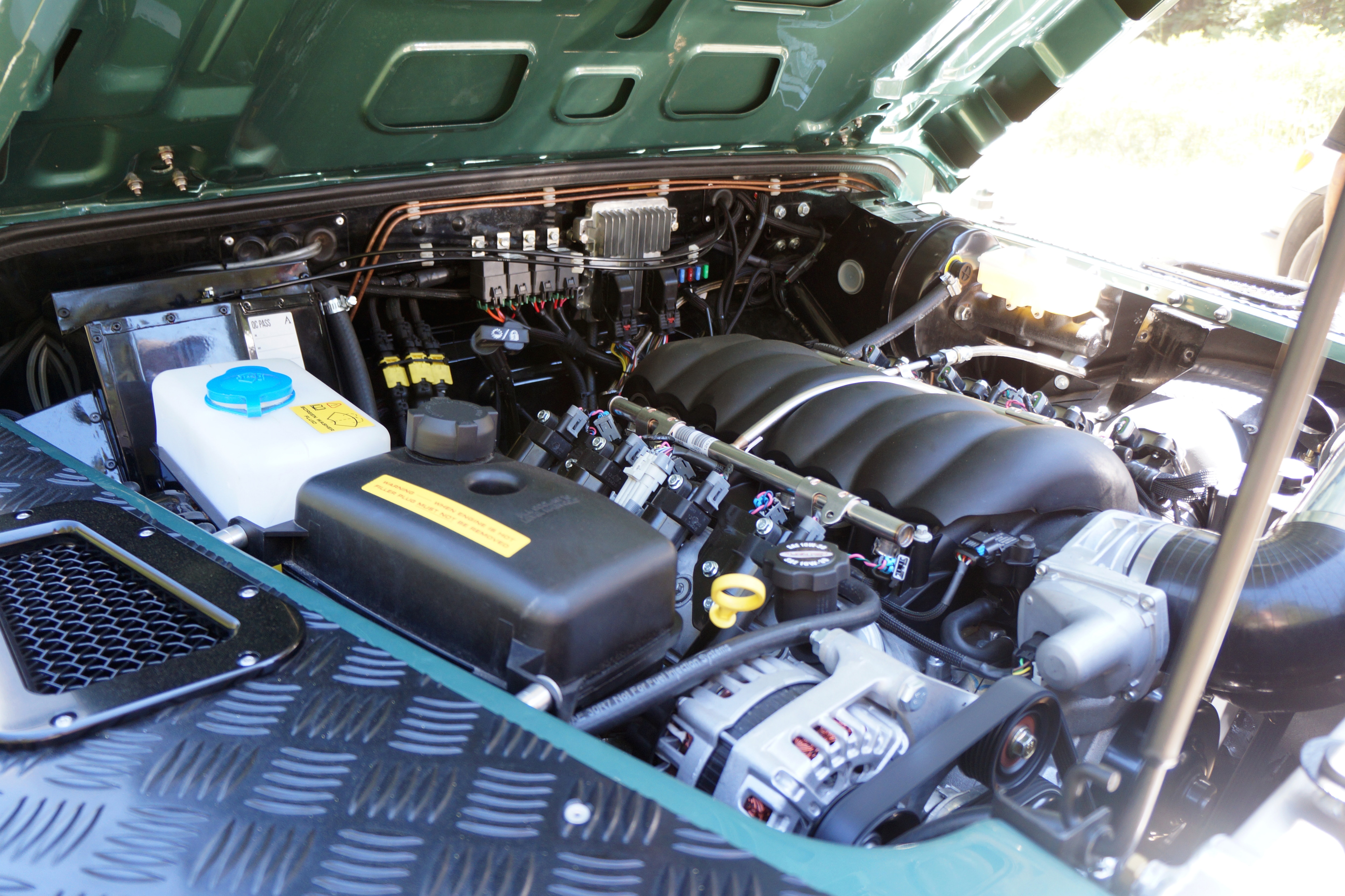 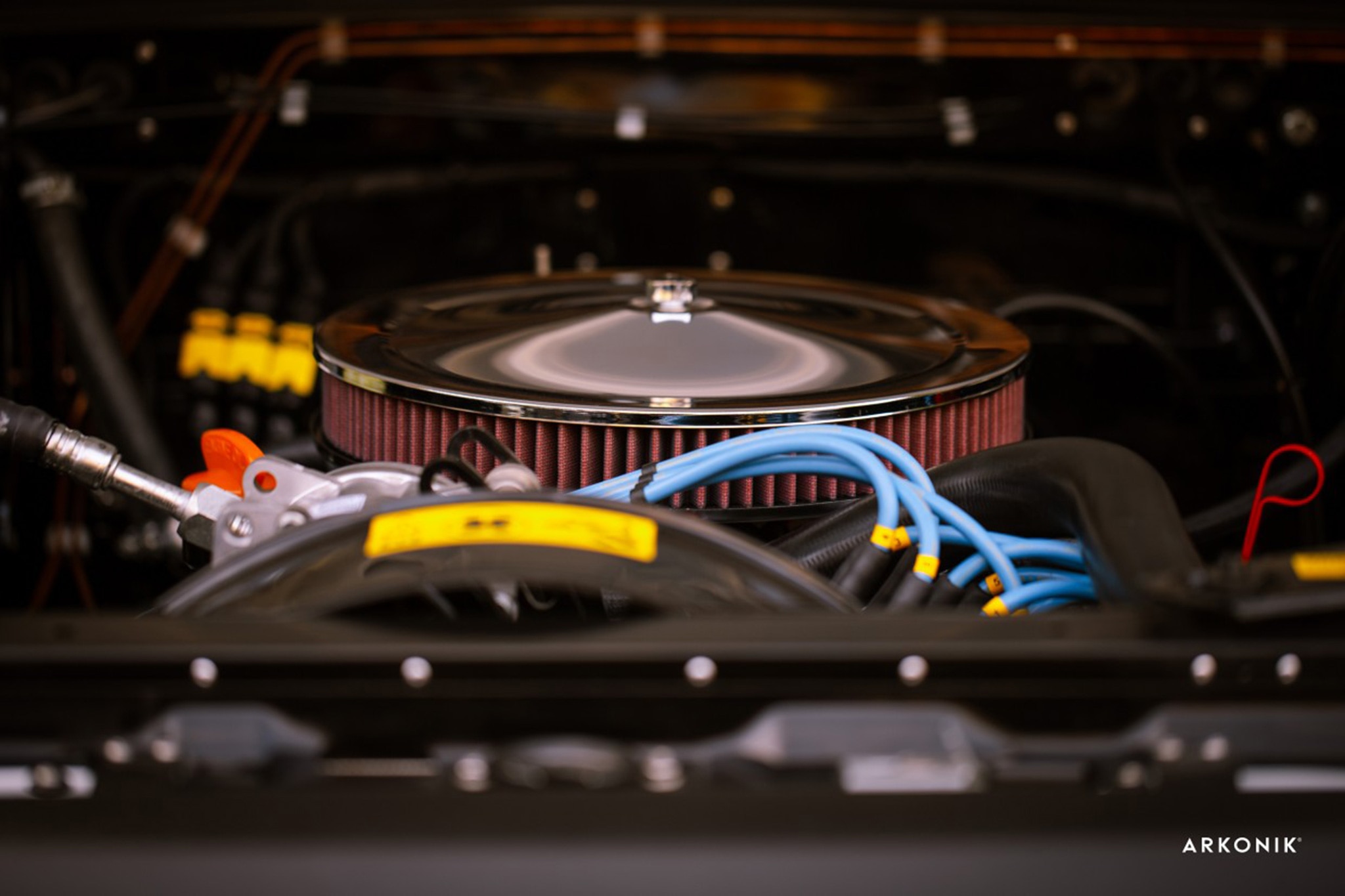 Engine: Arkonik rebuilds its engines in-house with every last gear and component being replaced with new parts. The two most popular engine choices are the original, Buick designed 3.5-liter V-8 and the 200 Tdi (turbocharged direct injection) diesel engine. The V-8 comes equipped with an MSD electronic fuel injection system that is dyno tuned to make around 203-horsepower with 170 lb-ft torque. The 200 Tdi is dyno tuned to make around 122-horsepower with 190 lb-ft of torque. For LS engine conversions, Arkonik’s Defenders are shipped directly to their customers in the United States (the main market with Canada and the Britain coming in after) where they are then registered and enjoyed for a few weeks as is. Arkonik’s partner, Scully Offroad in California, then arranges for the Defender to be shipped to its facility and arrive at the same time as the customer’s LS engine and other parts. The engines are then swapped and just like that, you now have an LS-powered Land Rover Defender. Earlier builds such as the D110 “Yeti” utilized a smaller radiator with a mechanical clutch fan leading to the engine running hotter than it needed to. Arkonik engineers later switched this stock cooling system out for a larger custom made Allisport radiator with Revotec electric fans which are now standard equipment on all of their builds.

Transmission: The manual transmissions on each Defender are just as extensively reworked as the engine with the only thing saved being the “shell” of the transmission. Every internal component is replaced with brand new parts. Arkonik also offers automatic transmissions such as the six-speed 6L80E transmission used in the D90 “Zenith.”

Brakes: When it comes to the brake system Arkonik replaces the Defender’s front drum brakes with disc brakes while rebuilding the rear drum brakes with new components and installing all-new brake lines. We found this system worked great when we had a chance to wheel the D110 “Wessex” and D110 “Yeti” off-road. But with other builds such as the 1989 D90 “Zenith” which includes an LS3 engine, Wilwood performance 14-inch brakes with six-piston calipers in the front and four-piston calipers in the rear are required to ensure safety. 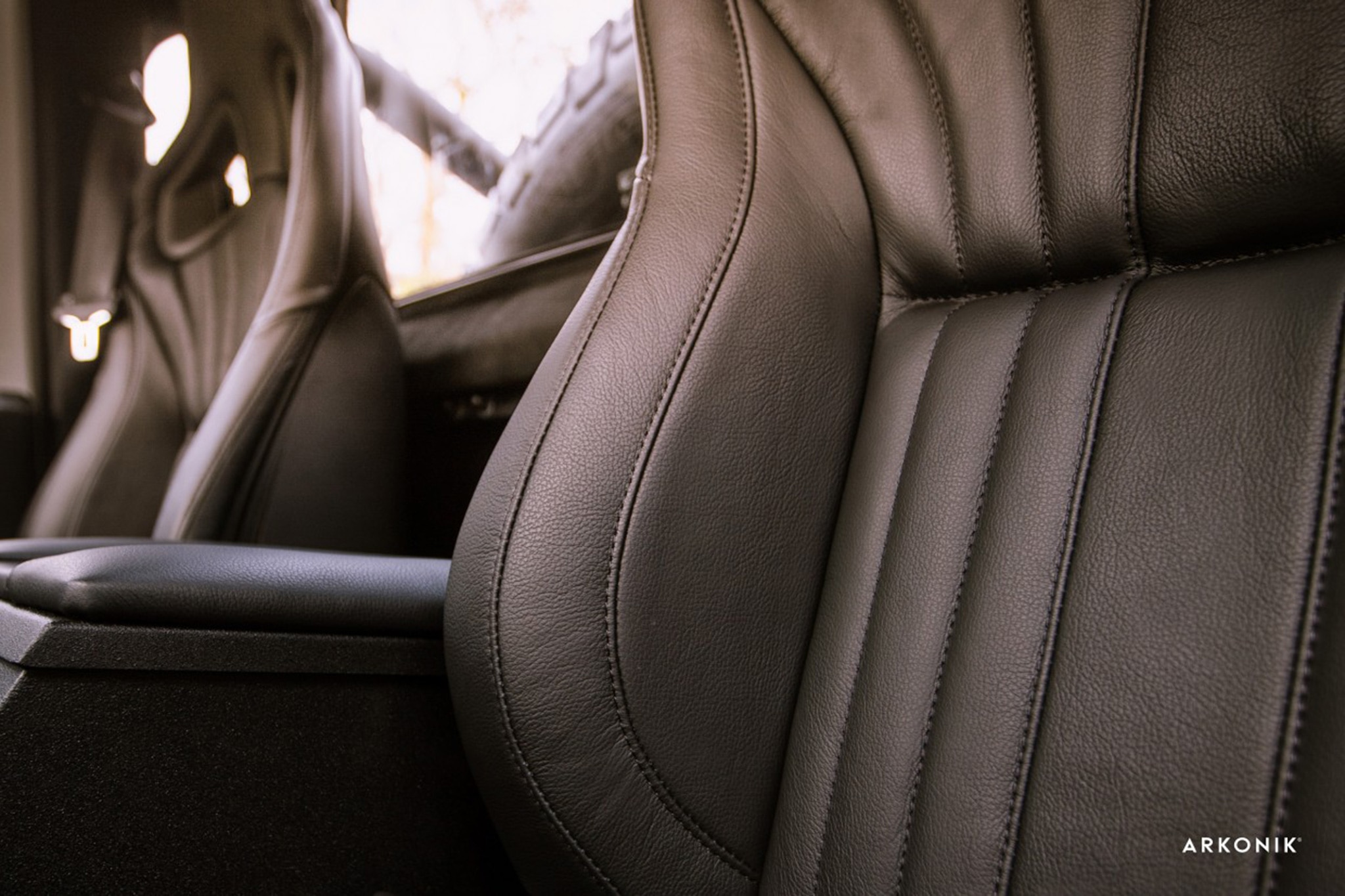 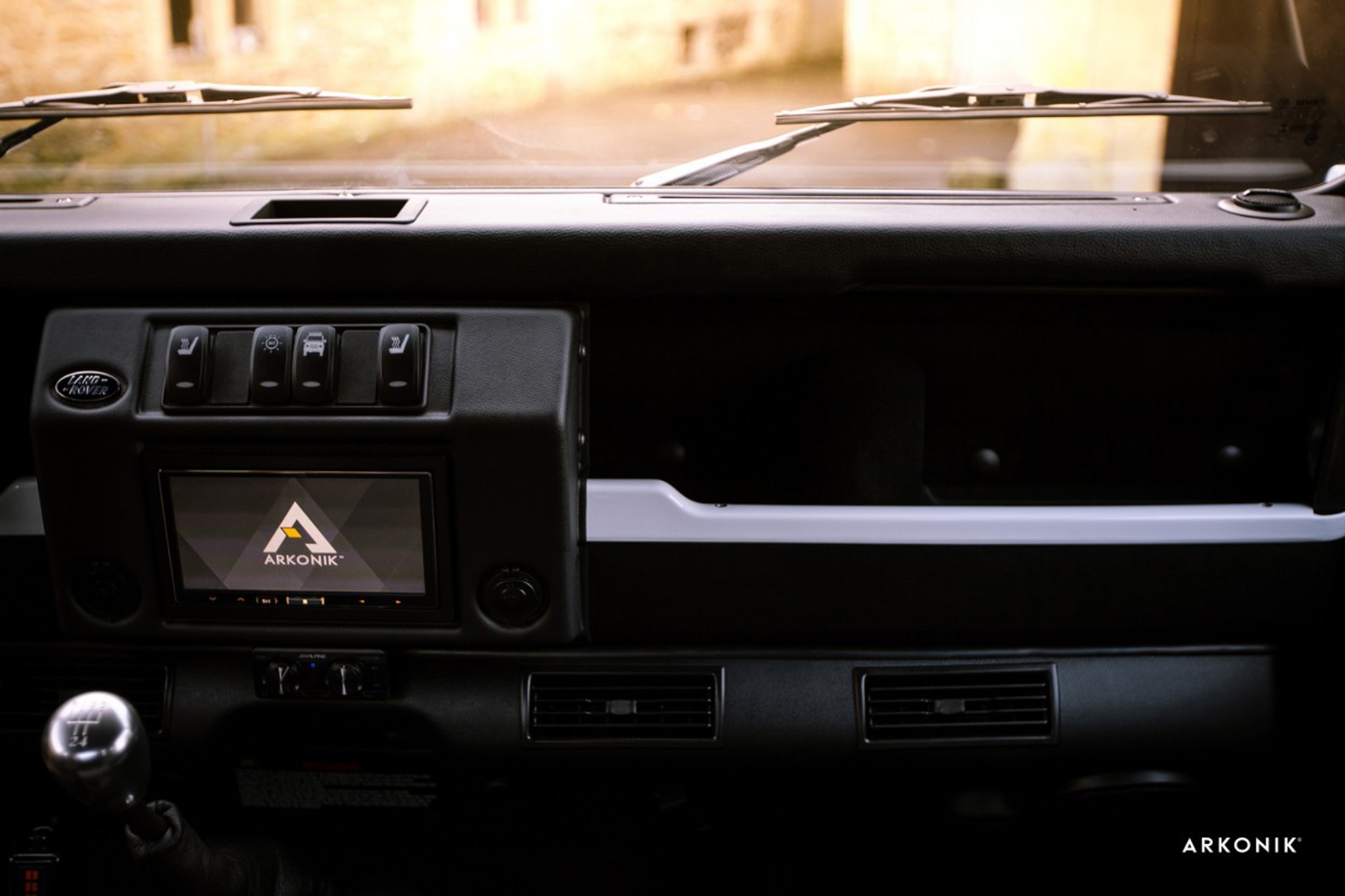 Seats: Customers have the options of choosing from several high-grade leather choices for their seats; Black Supersoft leather, Nut Brown Nappa leather with diamond Ivory stitch, and Burnt Plum leather are among a plethora of choices. The leather Arkonik uses is from the Bridge of Weir leather company out of Scotland, who also produces leather for Rolls-Royce and Bentley. Arkonik goes through and puts together the interior all in-house instead of shipping their builds out to an interior shop.

Accessories: Arkonik makes their own custom wiring harness in-house, allowing them to integrate many modern amenities into their classic Defenders such as an Alpine touchscreen system with Apple CarPlay. Air-conditioning and even a back-up camera are included to enhance the ride.

Comfortability: The designers at Arkonik pay careful attention when laying out the interior to incorporate each of these components into the interior so that everything looks like it belongs together. Another big feature is sound deadening which is achieved using dynamat throughout the interior during restoration in an effort to deliver a quiet and comfortable ride. When I first got to ride in Arkonik’s Defenders it didn’t feel like an off-road vehicle, it felt like far more like a luxury vehicle, which made the off-roading experience that much more fun.

Arkonik’s approach to the restoration and customization world by basically doing everything in-house and bringing an assembly line system to the mix no doubt enables Hayes and his team to keep perfecting and building some of the most impressive new/old Defenders you’ll find anywhere.

This Is One Rad Restored Land Rover Defender 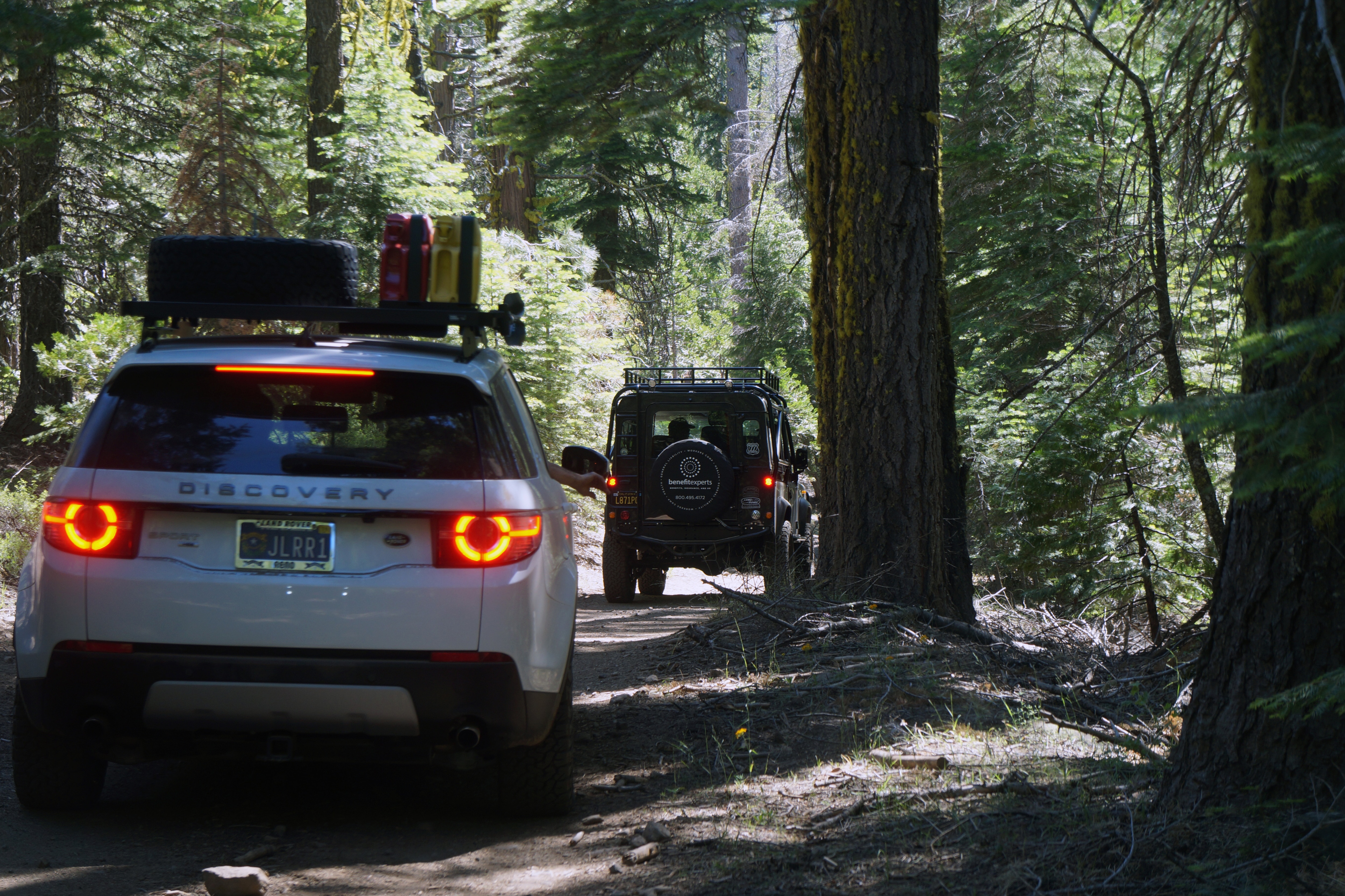 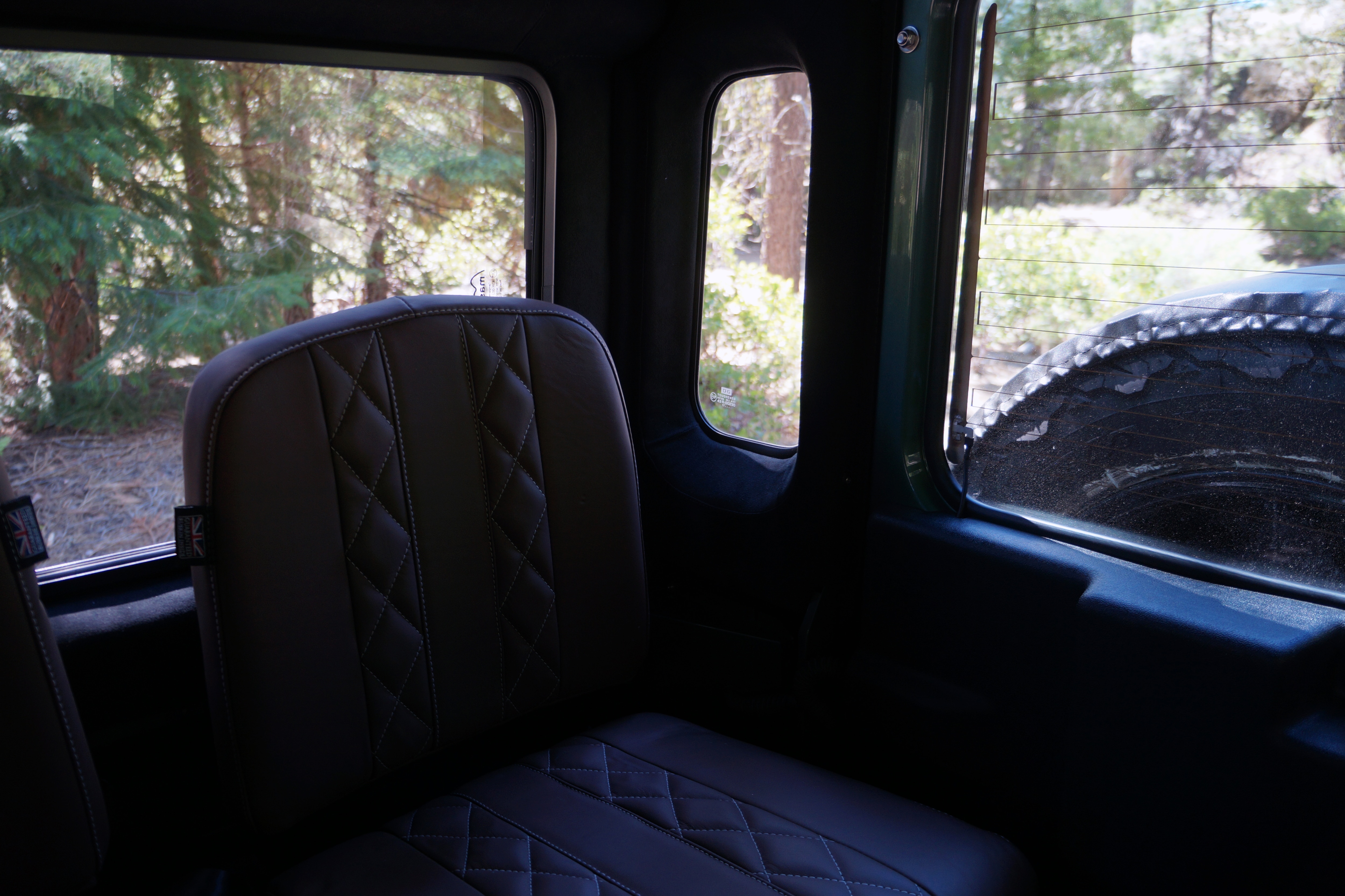 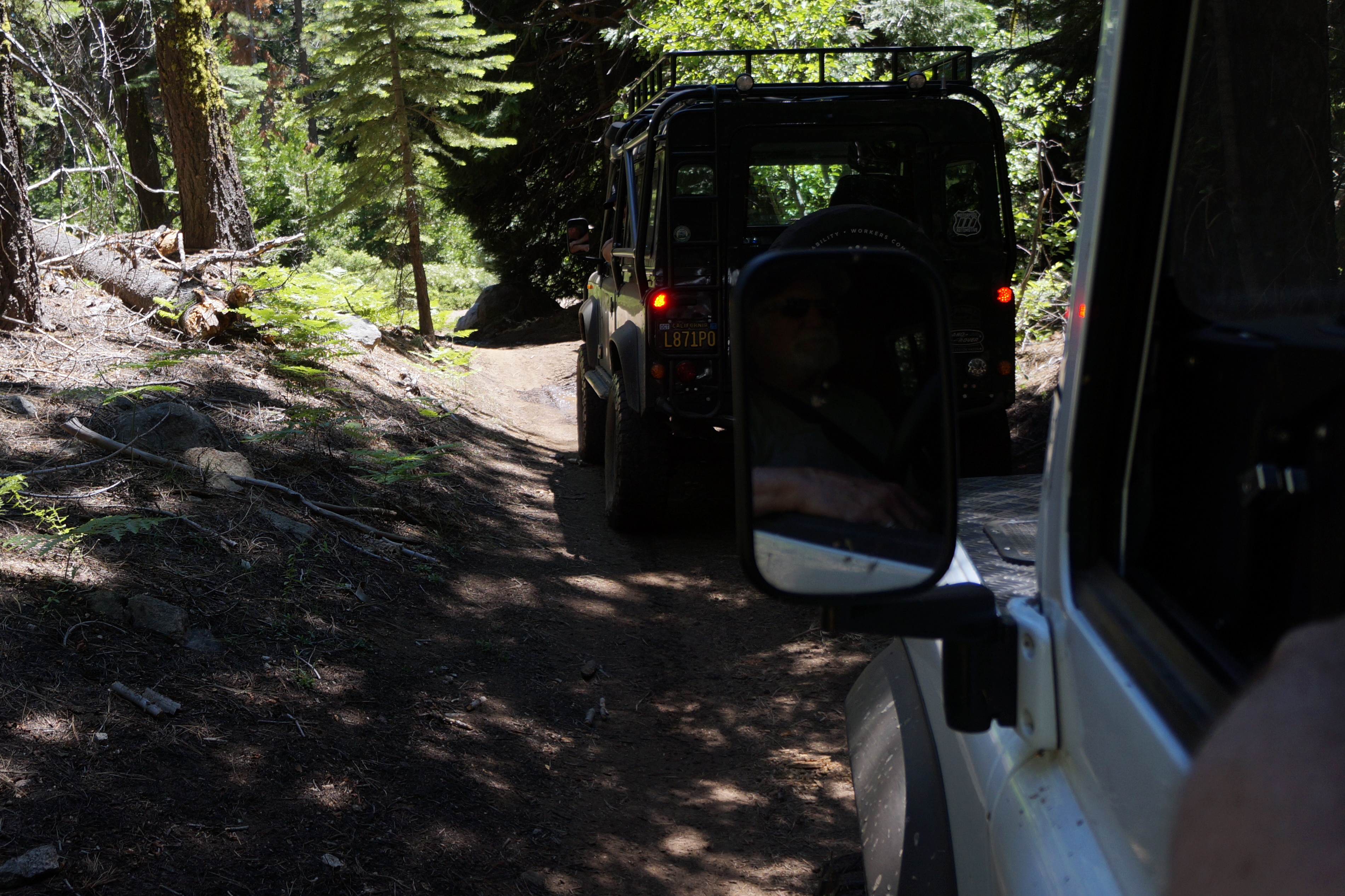 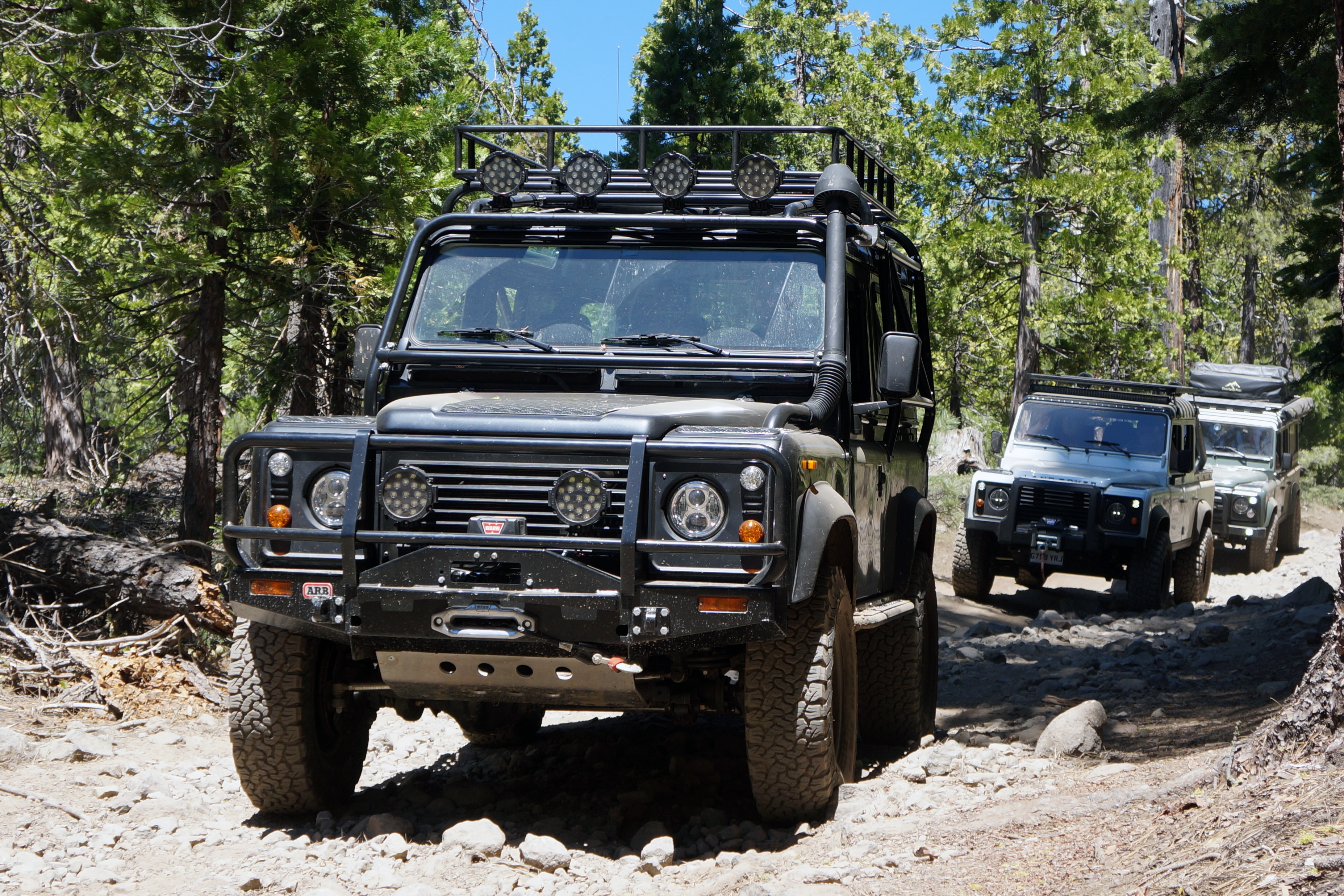 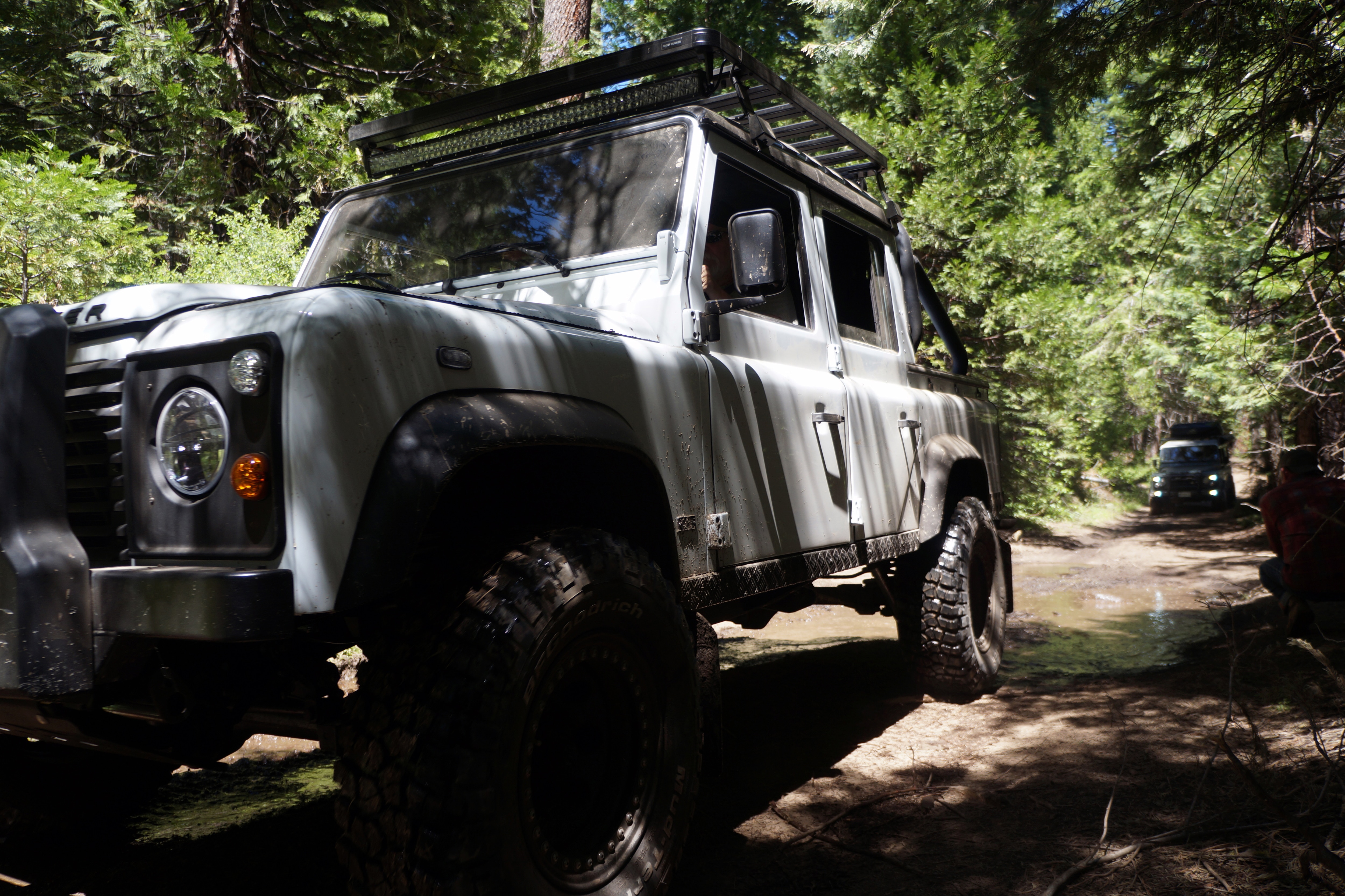 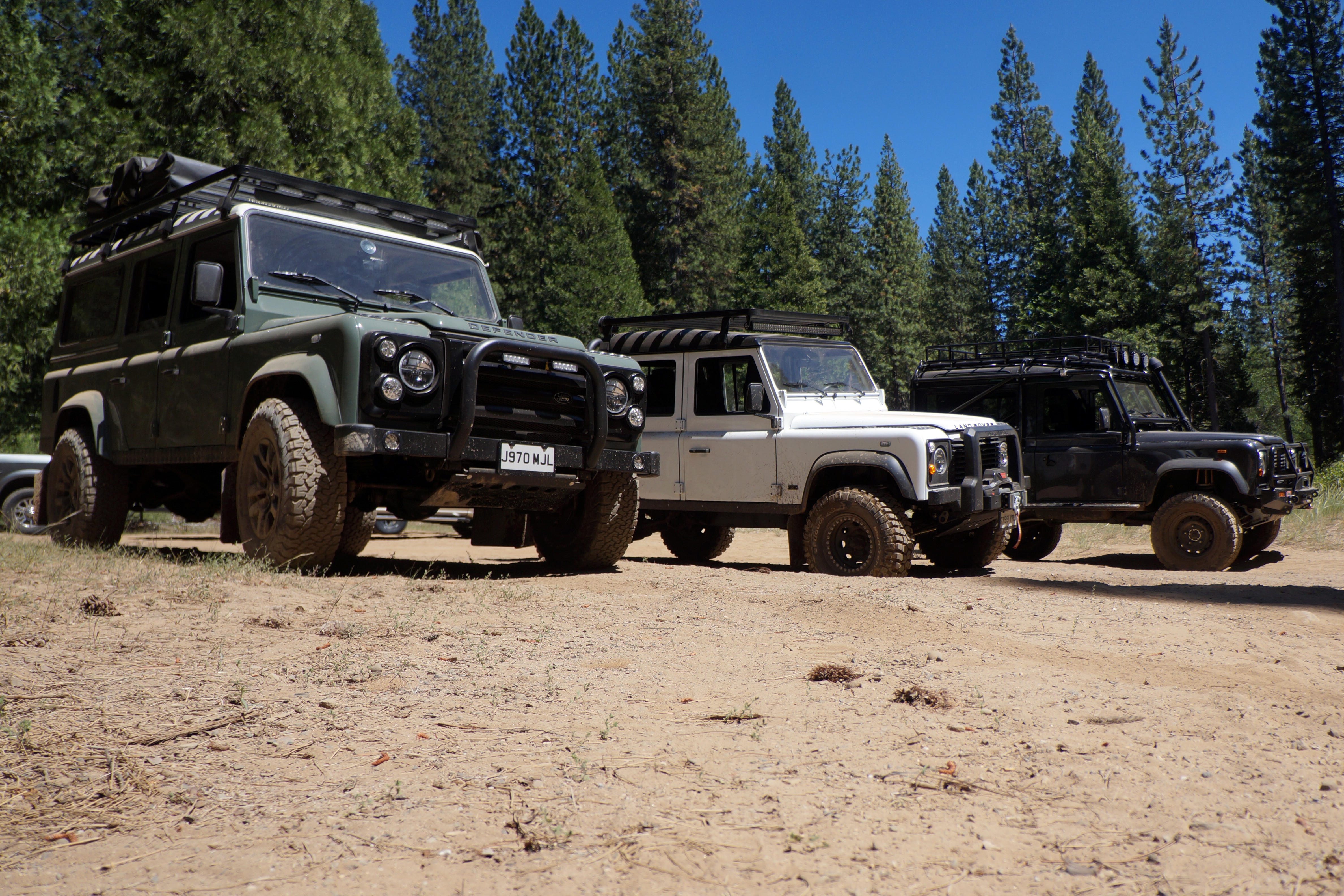 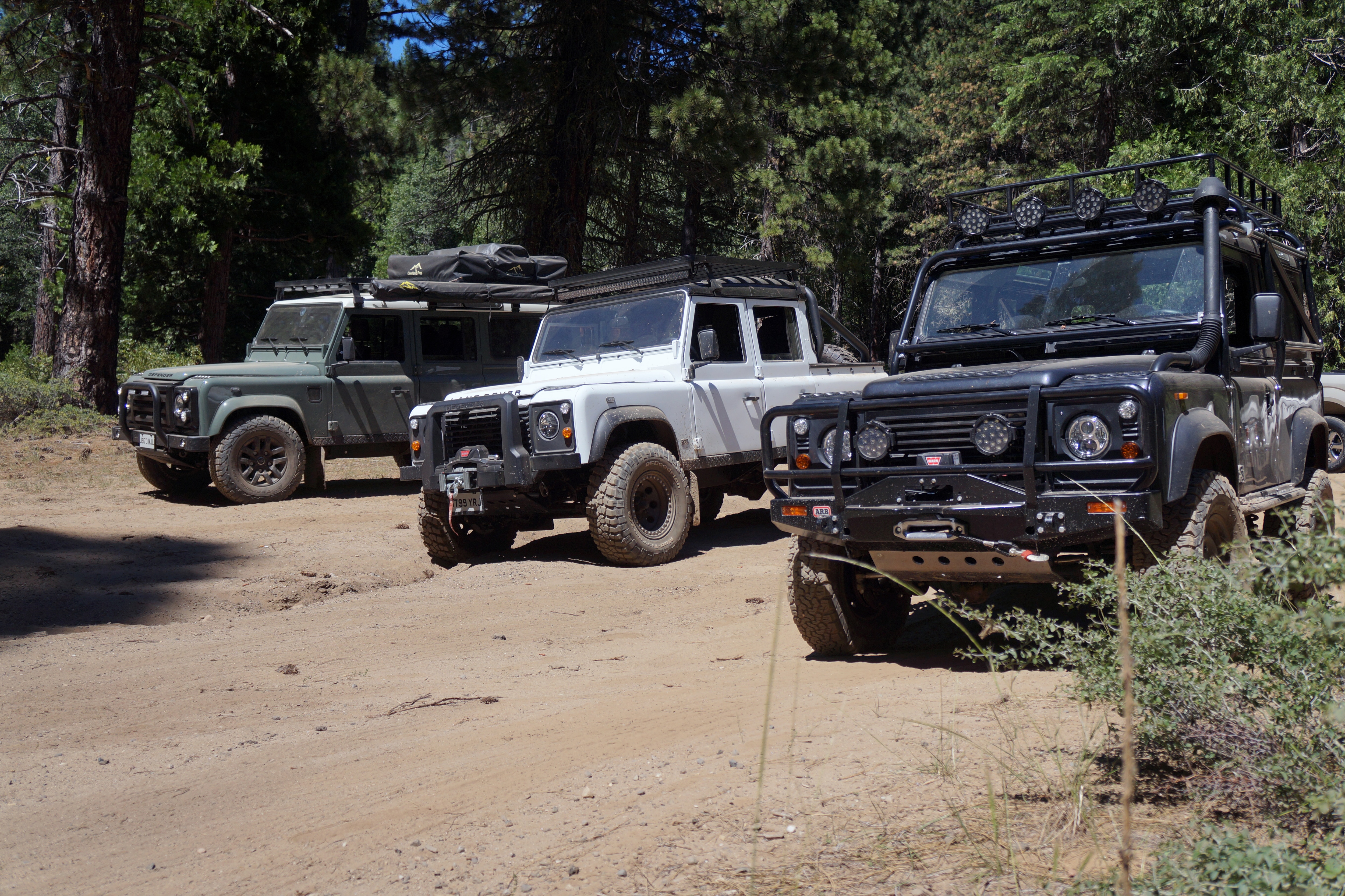 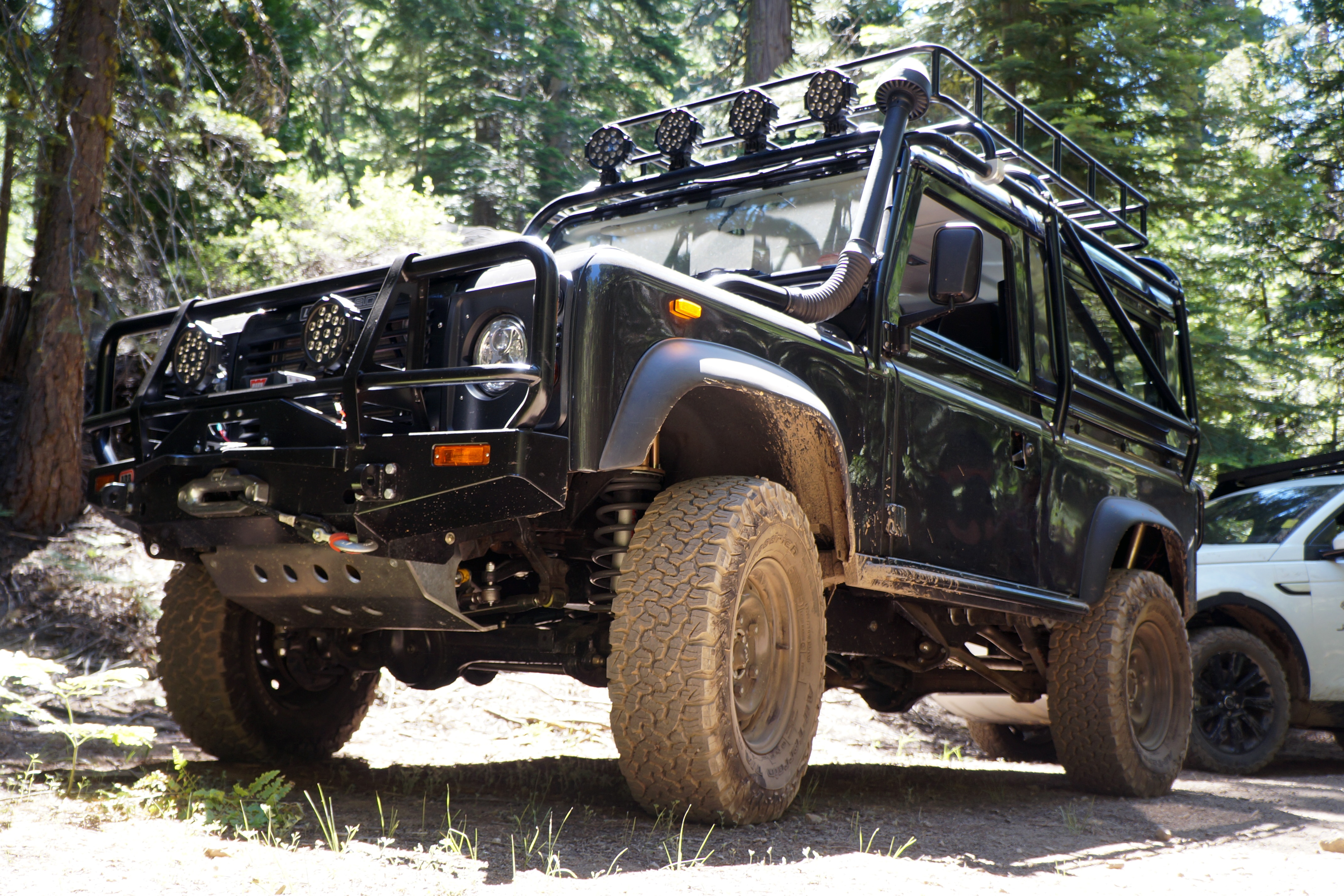 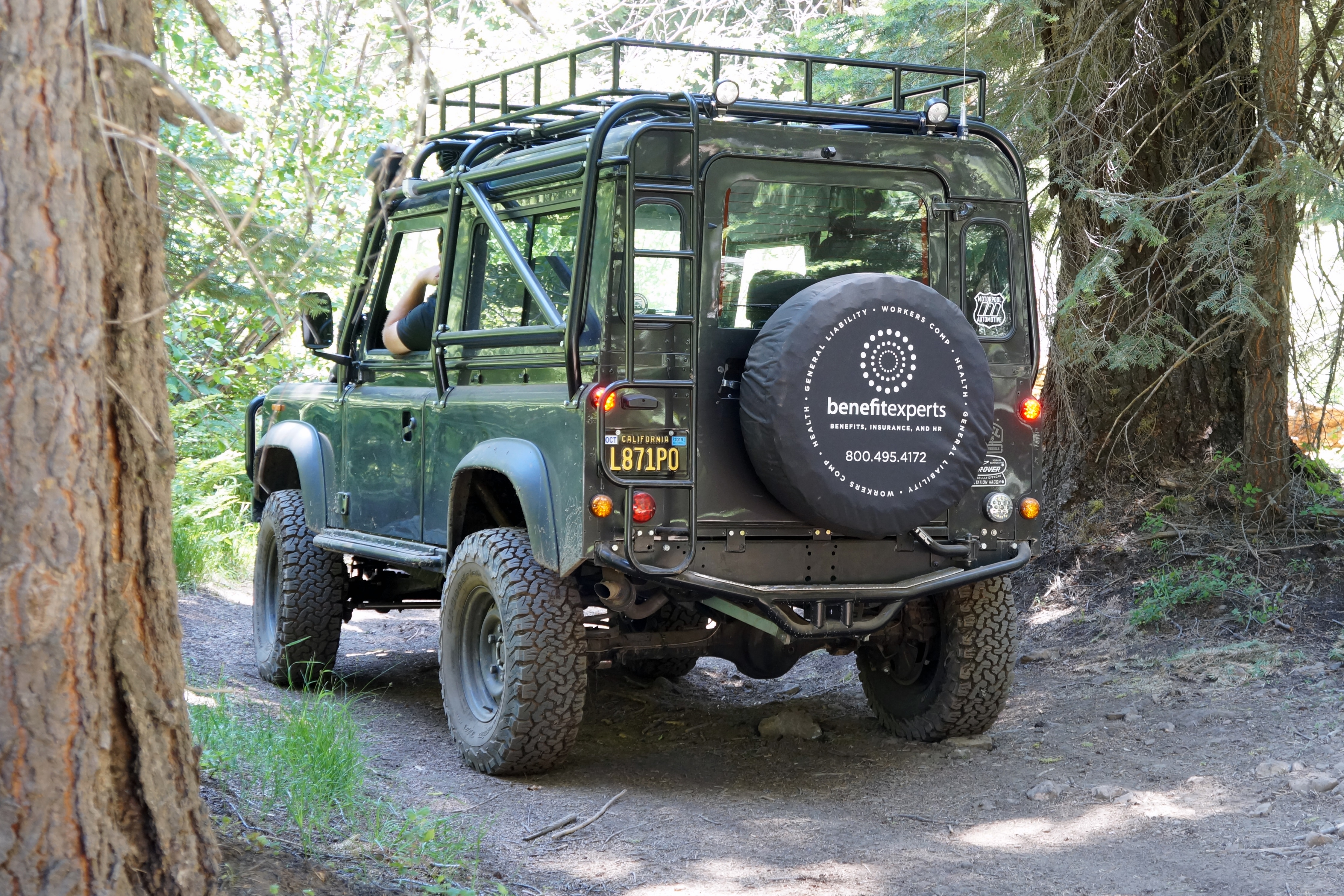